Hello Trainers! Pokémon GO 0.191.1 is slowly rolling out.  Niantic has Un-Obfuscated a bunch of stuff, including the entire Game Master file.  This is exciting news because it means that a lot of the things we’ve speculated about over the last few updates are now much more clear.  So let’s speculate about a couple of those things, permanent mega evolutions and how I think Pokémon Home is going to work. 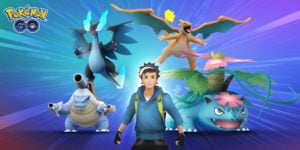 This one line of code is a big one.  In the main series games, A Mega Evolved Pokémon will only revert to its original state if it faints or the battle ends.  The mechanics for Mega Evolutions in Pokémon Go already allow trainers to use Mega Evolved Pokémon for more than one battle.  In fact, you can use it for several if you have enough raids lined up like a raid hour.  Is it outside the realm of possibility that Niantic is seriously considering allowing us to Permanently evolve into Mega Pokémon?  In a word, no.

So how would they do this?

Niantic could assign quests as they did with Galaran Farfetch’d and Yamask but they could incorporate the Non-Narrative questlines that were discovered as well.  Multi-step quests to unlock a Permanent Mega Evolution for a single Pokémon.  It’ll probably involve completing a number of tasks with the Pokémon as our buddy.  Win 5 raids, Win 10 gym battles, spin 20 Pokéstops, things like that.

The question then becomes, are we still going to be limited to a single Mega evolution at a time?  I think they almost have to, otherwise, people could make an entire team of mega evolved Pokémon and dominate.  If they don’t and allow us to Permenantly Evolve multiple, I think the cost of Mega energy required would have to be pretty high to balance that out.

My gut tells me that we will still only be allowed one Permanent Mega evolution at a time and that the cost to Mega evolve that Pokémon will remain the same as it is now.

*DISCLAIMER:  This section contains my speculation on energy costs, there has been nothing found in any code or any hints from Niantic that I am anywhere in the ballpark with these numbers.  I could end up not even being in the right timezone here…  So keep that in mind before you roast me in the comments. 🙂

It appears that each Pokémon will have a base cost, and that cost will increase based on its CP/level.  It’s hard to say what direction that Niantic will go with this, and what limits they’ll put on how much energy your transporter can hold.  So let’s speculate a little.

I think that Niantic will correlate transfer costs to a current system they already have in place in Pokémon Go.  Evolution costs.  So transferring a Magikarp would cost much more than transferring a Pidgey would, but every Pokémon in the evolution line would have the same base cost.  What about Pokémon that don’t ever evolve, Aerodactyl, Pinsir, or the legendaries?  My gut tells me they’ll all get the same base transfer energy, 300 perhaps.

Let’s assume they use a direct correlation, say every candy required for evolution will equal 10 required energy.

This section of code suggests that the transfer costs will be higher for higher CP Pokémon, as I mentioned in the APK breakdown article this makes sense.  The higher CP of the Pokémon your transferring, the higher the level.  So how much will these steps cost?

It could look something like this, increasing with each step increase in CP.  The higher the CP, the more a Pokémon will cost to transfer.  With the higher, 2001+ CP Pokémon costing 200 Energy to transfer.

None of what we’ve talked about regarding energy matters unless we know what the maximum amount of energy your transporter can hold.  My guess, given the number that we’ve discussed so far?  20,000.

A cap of 20,000 would limit the number of higher-level Pokémon you could transfer, but would still allow you to transfer a good number of smaller Pokémon.

Enough to transfer 1 Pokémon every hour.  Which, I think is reasonable.

What do you guys think?  Do you think Niantic will give us permanent mega evolutions? What do you think of the numbers I’ve come up with for Pokémon Home?  Do you think I’m close, or am I coo-coo bananas?  Either way, let me know in the comments!