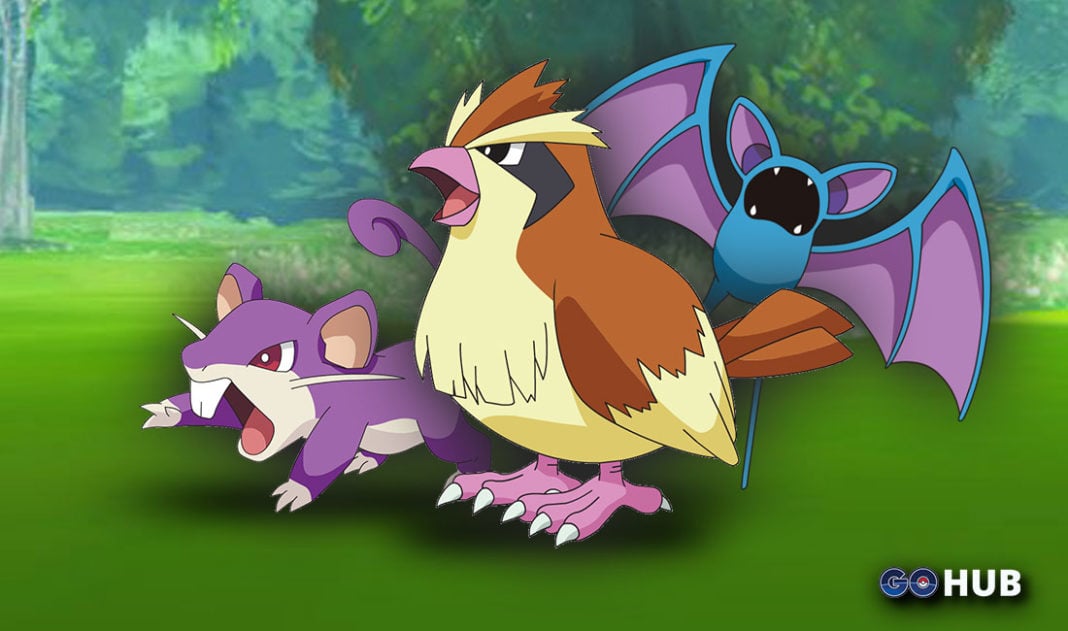 First of all, I know some fellow trainers will have their own point of view about this (“go to the city to play”), but let us be honest: Pokémon Go should offer the same game play no mater where you live!

This is a summary of my own adventure, my own “battle” with rural play. But at this point …. All my Pokémon keep fainting and I wanted to share my story with everyone.

I’m playing Pokémon Go since summer 2016. Right after the release in my country. And yes, I never missed one day of spinning and catching. Even when we traveled to Indonesia September 2016 we used the hotel WiFi to set incenses, lures and to catch/spin.

Summer 2017 we did a road trip in the USA (California) and we did manage to end up with more gym badges in the USA during those 18 days, compared with the gym badges collected in our own region and far beyond.

Soon after the release of the game, we noticed that playing in our own town wasn’t that great. Walking +2km’s to find one Pidgey or Rattata, nearly no stops and gyms, etc…

We found a solution for that: traveling a lot with our car, by public transport, just to get to cities and explore them. Drove for hours to grant ourselves some decent game play.

Cities have a crazy amount of Pokéstops, gyms and spawn points compared to rural areas.

Since the beginning of Pokémon Go, Niantic did add stops and gyms to the game on several occasions. I saw that new content popping up in those cities already packed with content over and over again. Rural areas were left behind once more, time after time.

With the introduction of raids the difference between game play became even more visible: as rural players are struggling a lot to get a raid done, urban players are dividing themselves in teams of the same color, teams of 20, teams of however you want to slice it.

In addition, a lot of rural players gave up and stopped playing Pokémon GO, so it became even more difficult to get things done.

In meantime the cities get the EX Raid invites…. We never saw one in a rather rural or semi-rural community.

It got to a point where I had enough of it and decided to do something about it. I had two options in my mind:

As my heart and passion is with Pokémon Go, I decided to go with the option number two.

Playing Ingress only to be able to submit portals feels  like using a tracker to spot perfect IV Pokémon – it actually feels like cheating to have something to do.

I decided to do this the other way around.

So… that cold Sunday, I put on my walking shoes, took my phone and a notebook with me and I went walking and exploring my own city.

Although it was only a few degrees Celsius outside, I had a great time: I discovered a few things I never noticed before, took a lot of pictures, made a lot of notes, even googled extra info about art and statues in town.

At the end of the day I collected a ton of data about my town and Points of Interest inside it:

This list was sent to the Pokémon Go Customer Service with the needed info. Info stating a lot of point of interest were in town to boost the game play in this rural area.

I did explain the lack of stops/gyms and even the fact that in the only park we have in town, nothing Pokémon related has been set.

Although communication and Customer Service went to a higher level recently at Niantic, the answer I got on my first e-mail was just a standard e-mail template.

I already told them that nearly no Point of Interest in town are a Poké stop or gym. So why this standard copy-paste answer?

I did notify Customer Service about my original remarks. Their answer on this one gave me the feeling they don’t care…

I made it clear I did understand the point Customer Service was making, but I did ask them more info about rural play and what Niantics plans will be with it.

Also asked if they had the contact of someone who could have a discussion about this with me, but I was blocked once again: 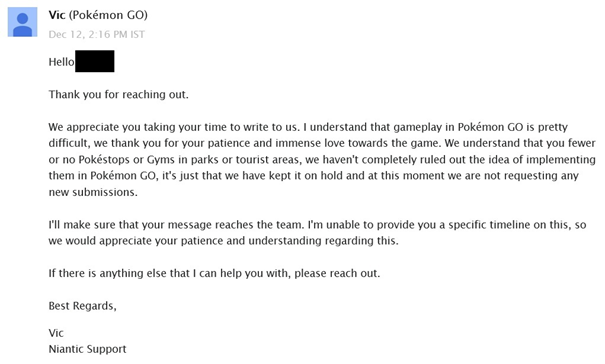 I tried to get more info why it was so difficult to implement new stops or gyms, I tried to get an idea why Pokémon Go doesn’t have a thing as Ingress for portal submissions, but no relevant info came from Niantic’s side.

But then, Niantic tweets out the following statement:

With the help of Ingress Agents around the world using Operation Portal Recon, we’ve identified interesting new locations to play our games. We’re happy to say that many of these locations will also be added to @PokemonGoApp over the next few days.

Unfortunately, this news had no effect on the rural regions I visited the last few days at all:

However, I also visited 3 (big) cities: new gyms, new Pokéstops, new content in all of them! Niantic’s action boosted game play in cities once more, it didn’t boost a single thing in rural areas. At this point, I become extremely curious about what was available in my own town in Ingress.

In order to check, I downloaded that game and went for a walk. And what did i see? Yes! A lot of portals were present in Ingress, but not migrated to Pokémon Go.

Why not? Why only extra migration from Ingress to Pokémon Go in cities and not in rural areas? Why boosting Pokémon Go in places where a boost isn’t needed? And forget, once more, the places who need the boost?

A new mail was sent to Pokémon Go customer Service with my new remarks and concerns. Their answer just repeated things I already knew, but didn’t answer the questions I had.

In addition, the sentence – “Any new Pokéstops/Gyms you may have noticed were due to the recent refresh we did in a couple of areas in an effort to add more locations for players to explore.” – made me laugh out loud.

So they did do an effort to add more locations in cities already packed with them. A city with 30+ gyms really needed some more? And rural areas don’t need anything extra? 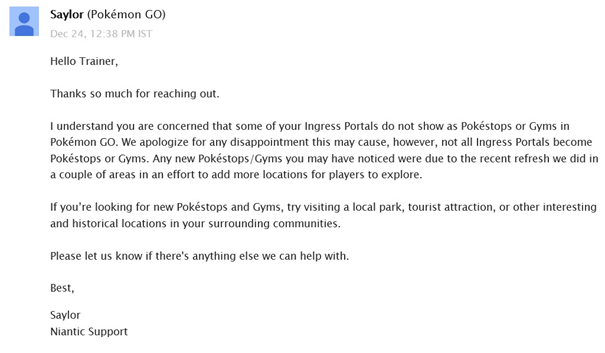 For this one I had a last answer ready:

“Your latest “refresh” to boost some areas…. I don’t know if you guys realize this, but I saw new stops and gyms popping up in cities where they already had a huge amount of them. No single rural area I got to had new stops/gyms.

So once more: rural players are left behind?

I can visit parks, statues and other points of interest in my region as much as I want, no single one of them is a Pokéstop or Pokégym. You guys keep adding that content to cities”

But it was the last and final answer from Niantic Support who did make me disappointing the most: 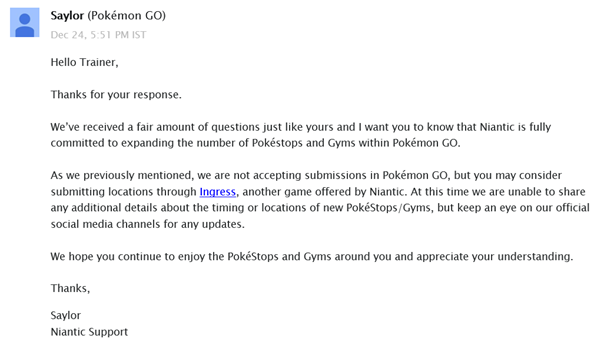 To all my fellow Pokémon Go players: if you want things to change in your own region, without knowing for sure if it will have an effect at all (as not all Ingress portals are migrated to Pokémon Go), you need to start investing in Ingress.

With this info, with Ingress 2.0 being announced, one has to wonder: why does Pokémon Go keep the link between Ingress that obvious? Does Niantic want to boost Ingress and the number of players being active?

Is it all about money? Is it about having better numbers for investors across all products?

I don’t know. But I have a lot of question marks on this.

Ingress players, sorry, but your game will be “abused” by Pokémon GO players, only to have our own game play boosted.

As far as my own personal battle to improve rural play goes, I think the only option is to give it up or to start playing Ingress. However, the second option is not cool in my opinion – I don’t want to invest in other things to have a decent game play.