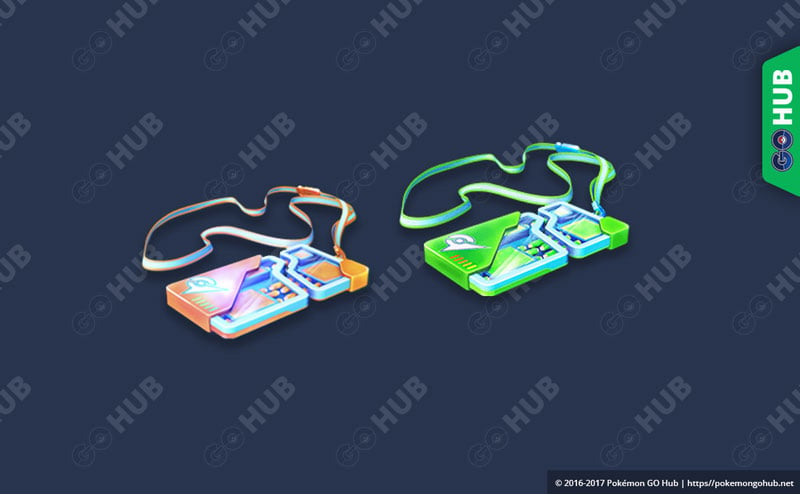 A Pokémon GO raid pass allows a trainer to participate in any Normal, Rare, Mega or Legendary Raid Battle. There are 4 types of Raid Passes: a daily free pass (orange), a premium pass (green), a remote raid pass (blue) and an EX raid pass (black).

Each Raid Battle a trainer participates in requires 1 pass. The raid pass is consumed upon the trainer entering the raid after the timer has counted down. If you exit the lobby before the raid begins, your pass will not be consumed.

If you are unsuccessful in defeating the raid boss, your pass will remain in the gym and you will be able to reattempt the raid without using another Raid Pass.

Trainers receive 1 Free Daily Raid Pass each day by spinning the Photo Disc at any Gym.

A Premium Raid Pass is a single use paid for Raid Pass, that is consumed once a trainer enters the raid battle. A trainer can use as many Premium Raid Passes as they like per day, with no limit on how many you can hold in your bag space.

Premium Raid Passes can be purchased from the in-game Shop for 100 Pokécoins. They are also regularly offered in bundles as part of the Limited Time Only Boxes that are for sale at the top of the in game shop.

Premium Raid Passes can also be used to change the rewards a trainer receives in the PVP Battle Leagues. There is a special ‘Premium Rewards‘ section that rewards you with a Pokémon encounter as your first win reward, rather than your third reward in the normal rewards section. You are also rewarded with more rare candy, stardust, and 5 TMs in the Premium Reward tier. Using a Premium Raid Pass gives you 5 battles in the Premium tier.

Please keep in mind that once a pass is consumed, it cannot be returned to your Item Bag, even by exiting the Raid Battle.

Check out our Raid Pass guide for more information.

EX Raid eligible gyms are marked in blue in the top right corner as an ‘EX Raid Gym’ to make it clear that it is possible to trigger an EX Raid at that gym location. They are usually found in parks, or at sponsored gym locations.

This special Raid Pass allows the recipient to participate in an EX Raid Battle at a specific time and place. This time and place is set in game and cannot be changed. While the EX Raid Pass will allocate a time slot, we advise organising with your local community where possible to set a time to participate in the raid, and if you are unable to do this, to be there when the raid boss hatches as there will most likely be other trainers at the gym ready to complete the raid straight away. EX Raids can be busy locations, so please be respectful of your surroundings.

This coveted pass offers trainers a chance to battle and catch an exclusive EX Raid Pokémon.  In the past this has included Pokémon such as Mewtwo, Deoxys and Regigagas.

EX Raid passes are invite only and cannot be discarded from your bag. If you do not complete the EX Raid pass at the specified date and time, it will then vanish from your bag space.

If you are invited to an EX Raid at a gym you have raided at, you are able to invite one other trainer to join you at that EX Raid. If that trainer rejects that invitation, you cannot send it to another trainer, so check that the trainer is able to attend the raid before you invite them.

For more information on how to obtain an EX Raid Pass, check out our Exclusive Raid Battles guide.