Due to popular demand, Kristy (GO Hub community member) has created a table showing the Maximum Capture CP of the current Raid Bosses with the weather effect boost. Weather boosted bosses appear as Level 25 captures, so their CP can be significantly higher than it is without the boost.

Enjoy the tables and Kristy’s writing. We hope you will also have the courage to submit a Generation III guide and help build the Hub. We are always looking for community writers and collaborators.

Weather Boosted bosses appear as Level 25 Pokémon and regular bosses as Level 20 Pokémon. The table below shows their CP values with perfect IVs.

In image format (click to open large version in a new tab): 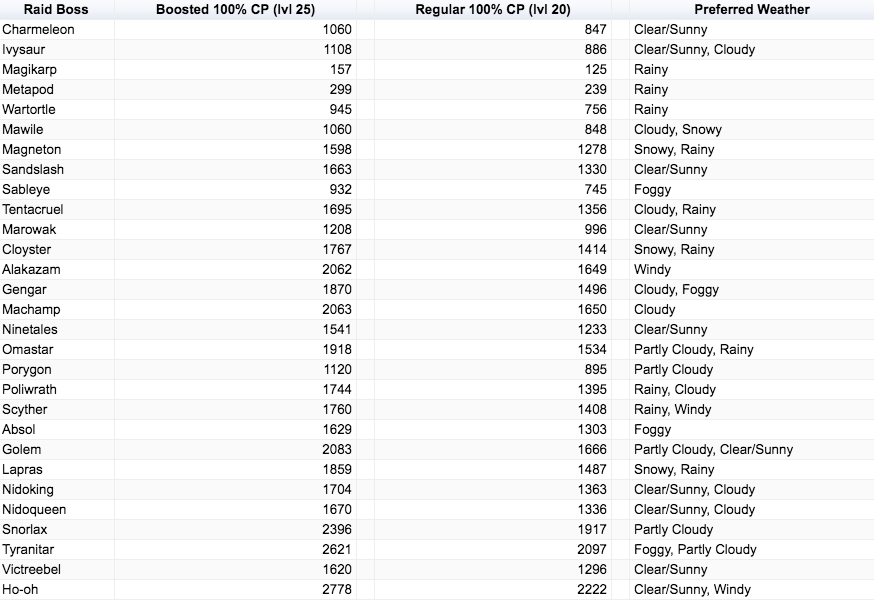 About the table above

With the new weather additions to Pokémon Go, there have been many different changes to the gameplay, specifically a difference in spawns favored by weather, CP boosts, 25% stardust boosts when weather affected Pokémon are caught, and power boosts for weather affected attacks. Attacks executed in their preferred weather will have a 20% boost in power, and it seems like raid bosses are also affected by this boost during battle!

Right now, Ho-oh is the only current legendary raid boss, so places that have a lot of clear weather might have a bit of an issue. In clear weather, grass, fire and ground type moves are boosted, meaning Ho-oh’s charge attacks, Fire Blast and Solar Beam, will be more powerful; as if Solar Beam needed boosted at all. This may make it harder to beat the raid boss, or make it so it requires a few more people, especially with the un-boosted Solar Beam already being a trouble for most of the counters for Ho-oh.

At the same time, the CP of Ho-oh in clear weather will be boosted on the catch screen, as it will be level 25 instead of the normal level 20 raid boss. The 100% IV Ho-oh in non-affected weather is 2222, while at level 25, the 100% CP is now 2778. So if you see a 2778 Ho-oh in clear weather, you have yourself a perfect Ho-oh! The IVs are not changed, however, they are just caught at a higher level, as if they had a head start. Their overall max CP is still the same for both perfects after powering them up, so these Ho-oh are not more powerful than others caught outside of the boosted weather.

Weather conditions impact every raid boss, not just the legendary raids. In general, legendary raids are more difficult to beat and require a larger amount of people than normal, so keep this in mind when gathering a group in suitable weather for the raid boss you will be fighting; and good luck trainers!

The Hoenn Mega Starters: A Crystal Ball On The Upcoming Mega...