In a recent interview with Gamespot, Michael Steranka (Pokémon GO’s live game director at Niantic) shed some light on the strategy behind the new Community Day Classic event and whether or not trainers can expect to see it being repeated in the future.

The first-ever Community Day Classic event was just a trial run, and player feedback will play a key role. According to Michael Steranka, Niantic doesn’t want to overcommit and the exact formula moving forward is yet to be determined. Steranka added:

“Maybe we’ll do it once every three months or 1-2 times a year, or maybe players will hate this and we’ll say, ‘That was a good trial run, but we don’t need to do this again.”

Niantic is always committed to listening to its player base, and this is where YOU can participate. So, what do you think? Did you enjoy the event? Was it too short? Were the spawn frequency and the shiny rate okay? Did you feel it was too close to the other Community Day event happening this month?

If you want to provide feedback, there are several ways you can participate. You can tag @PokemonGoApp on Twitter, leave a comment down below or use Pokémon GO’s official channels in social media. If you use Reddit, the most active Pokémon GO communities are r/TheSilphRoad and r/PokemonGO.

The first-ever CD Classic event took place on Saturday January 22. Unlike recent CDs, it only lasted for 3 hours instead of 6 (from 2PM to 5PM local time).

There were no new event bonuses, so the approach was rather conservative.

In case you’re wondering, Bulbasaur was chosen as the first CDC-featured Pokémon for the following reasons:

Kratos thinks that Community Day Classic is a great way to address the legacy move FOMO (Fear Of Missing Out).

Venusaur is a great Pokémon to use in Great and Ultra League, but it needs Frenzy Plant to be usable. Like FP Venusaur, there are plenty of other Pokémon that need their legacy moves to succeed in PvP, and newer trainers often think that they can’t compete without them. Events like CD Classic help level the field and lower the PvP the entry barrier, which is fantastic.

Nobody is forcing you to play the event if you don’t want to. If you already have a Venusaur built for GL/UL, you can just skip the event. It’s not replacing the CD happening that month, it’s just an extra event where you can participate if you want.

CD Classic is also a great way to farm Candy XL, XP and stardust. If you’re a completionist, a hundo hunter or a raider (yes, FP Mega Venusaur is also a good Pokémon to use in raids), you probably found this event quite interesting too. One of the best aspects about this game is that there is no “right” way to play it, everyone has their own goals.

As for the duration of the event, 3 hours is okay but I believe extending it to 6 hours (like the usual CDs) would be even better. Believe it or not, 2-5PM is not a good time slot for some western european countries. Lunch time is usually between 2:30-3PM where Kratos lives, so the current time slot is not the best.

All in all, the new CD Classic event was a good idea according to Kratos. Introducing more ways to reduce FOMO, help newer trainers and lower the PvP entry barrier is always a welcome change. Plus, CD Classic reduces the odds of seeing repeated CDs!

Jelly also thinks that CD Classic was a good idea.

Having the chance to replay some of the best CDs to date is always great. Some of the old CD Pokémon haven’t been around much, so being able to catch them again is refreshing and a great opportunity to add a missing shiny/good IV mon to your collection.

3 hours is a good time for a Community Day rerun, according to JellyBean.

Spindiana also thinks that CD Classic was a good idea.

However, he questions the definition of ‘Classic’, per Niantic’s standards.

Do they just mean something that ran a long time ago or is a Classic CD based on rerunning a Pokémon that is almost essential in today’s meta and still relevant?.

According to Spindiana, cherry-picking the CD Classic Pokémon would be the way to go, even if that meant having less CDC events.

I don’t need to see some of the Community Days again – he added.

Two posts went viral on r/ThesilphRoad: A survey and a general post gathering feedback for Niantic regarding CDC.

With over 5700 votes, the results of the survey clearly show that trainers want to see more CD Classic events happening in the future. 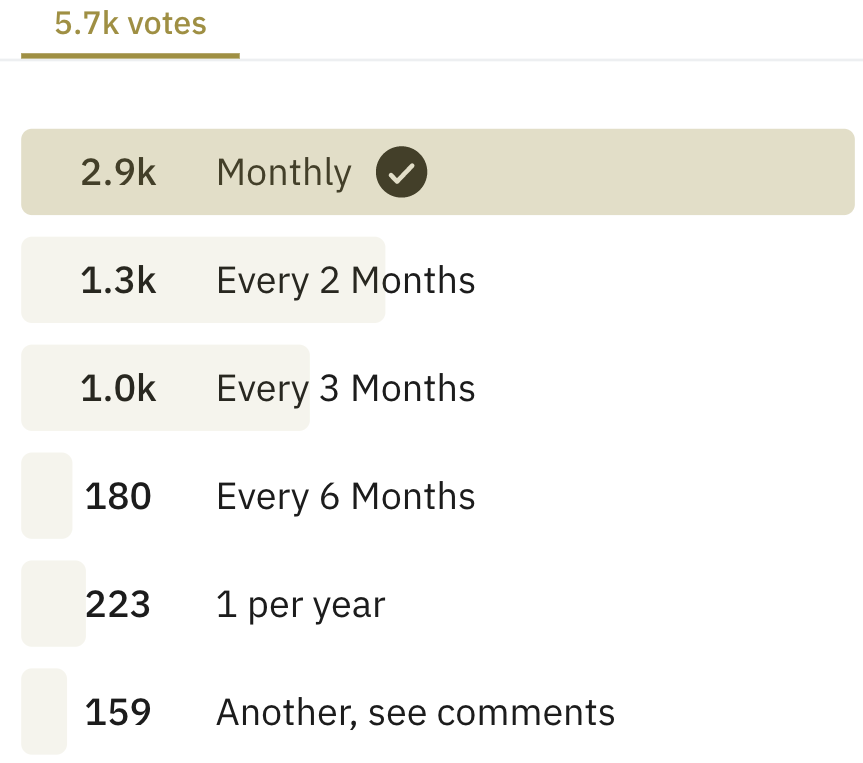 The monthly CD + CDC formula seems to sit well with most trainers, according to the poll results. Doing a CDC event every other month or once every 3 months does not seem to be a bad idea either.

However, a lower frequency would probably need to be tied with a bit more cherry picking. Having to wait for 3 months just to get a Pikachu CD rerun would probably not be a good decision on Niantic’s end.

Some of the most popular comments on the 2nd post include:

I am glad they did as a non-main community day. I hate that they wasted months on repeats in previous years. I think these “catch up” community days are great as long as they don’t interfere with new Pokémon community days

As they pointed out, part of the Pokémon GO Community did not agree with Niantic’s decision of doing a Charmander/Eevee CD rerun. Although different exclusive moves were featured in the rerun, this particular aspect does not seem to be that relevant for most casual players.

I liked it, I started playing again in late 2020, so I missed most of the old Comm days.

Some trainers play here and there, and it’s not difficult to miss a Community Day event. CD Classic events are indeed a great way to catch up, so that’s also a positive aspect of having monthly CDC events.

I really liked it and hope they do more. My only request is that I wish you could use normal TMs to change charge moves into the CD move.

And you? What do YOU think?

Did you enjoy the event? How often would you like to see CD Classic events taking place in the future?

Feel free to let Niantic know by providing constructive feedback! As they have said multiple times, they’re always looking for player feedback to improve the game. And this might be the right time to do so.

Trainers!  The much-awaited box legendaries of Pokémon Sun and Pokémon...

Inkay is a dual and type tier...

Frillish is a dual and type tier...