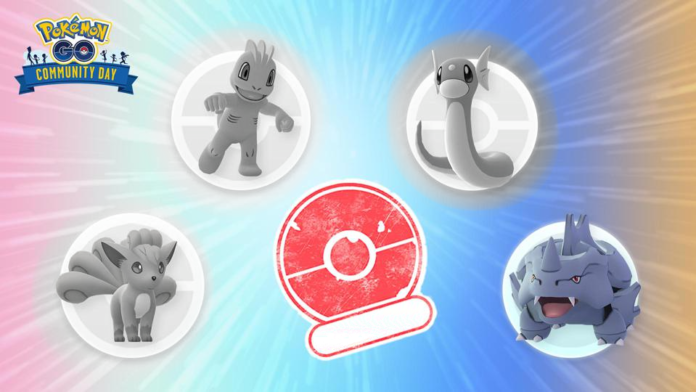 It’s been a while since the last Community Day poll… In fact, the very first one was announced on January 22, which was almost a year ago!

Do you remember? There were voting campaigns all over Twitter and other social media. Rhyhorn won the “election” and it ended up being the featured Pokémon of February’s Community Day.

This hasn’t been the only time we’ve had the chance to vote for a specific Community Day’s featured Pokémon though, as Weedle, Gastly, Porygon and Charmander were also elected later on.

One thing that saddens me is that some of the exclusive moves that the “losers” of such polls could have learnt were pretty decent. For example: Superpower Dragonite would be pretty good in Master League Premier! So what happens with the losing candidates? Will they ever get these exclusive moves?

We’ve had the chance to “vote” three times in the last year: February, June+July and September+October. In the first community day poll, only the winner (Rhyhorn) ended up being featured as next month’s Community Day Pokémon. In the other 2 polls, two winners (instead of only one) were chosen as the featured Pokémon for the next 2 Community Days.

So let’s take a look at the list of CD poll losers and what exclusive moves they could’ve learnt:

As you can see, some of these moves were pretty interesting!

Alternative ways to obtain these Pokémon

Such a pity that we haven’t been able to obtain these Pokémon. But how about analysing alternative ways to obtain them?

Research Days are a very interesting way to feature them. “Participate in this Research Day, evolve Dragonair and you’ll get a Dragonite that knows the exclusive move Superpower!”. How does that sound?

Most of the Pokémon listed above are much better than the Pokémon we’ve seen featured in the last Research Days, to be honest. Nidorans? Meowth? Lotad? Castform? Minccino? I’d enjoy a Dratini/Machop/Grimer Research Day much more! How about you?

Spotlight hours have also featured plenty of trash Pokémon, to be honest. Most of my locals only participate in some them for the bonuses, they don’t even care about the Pokémon because most of the Spotlight Hours feature common (and often useless) spawns.

Adding a random CD poll loser to some sporadic spotlight hours would be a nice surprise!

Add these moves to their regular movepool

If you can get all the exclusive moves with regular TMs, what’s the point? Well, it’s not exactly like that.

What I’d suggest is to add these “forgotten” moves to the regular movepool of these Pokémon once a certain time period since the CD poll has passed. 1 year would be a reasonable estimate, don’t you think?

I’d also suggest doing that with past CD winners. Why can’t we get Meteor Mash Metagross (more than two years after its Community Day!) unless we spend an Elite Charge TM? It’s one of the best Pokémon in the game and newer players are at a significant disadvantage in Master League Premier without it!

Perhaps in some cases it’d be nice if one of the losing options was extremely popular, but that didn’t really happen in the last 2 polls (maybe because most of the options were ptetty bad?).

Have you ever seen the Pokémon of the Year voting process? Every year Pokémon fans get to choose which Pokémon they think deserves this award. For example, Greninja was 2020’s winner:

I’m not saying we should be able to choose from the full Pokédex (Pokémon such as Axew, Gible and Litwick would always win), but perhaps voting among a larger list as a first draft and then choosing the 4 most popular options to do the final voting would be a nice alternative. Trainers would feel like their opinion is being taken into account and their voices are being heard.

Oh, and I almost forgot… An in-app voting system would be great! Not everyone has a Twitter account, and this has been a common complaint in previous CD polls. It’d be amazing to see the results live, don’t you think?

Another concern is that most of the CD exclusive moves in the last year are clearly PvP-oriented. I’m not really against that, but I think there should be some sort of balance between PvE and PvP Community Days. Take a look at the results of this poll we did on Twitter a couple of months ago:

As you can see, players who chose PvP as the main reason why they play are in the minority group. Of course that’s just a Twitter poll and real results would need a much bigger sample size, but I’d say it’s a decent approximation. If you analyze the exclusive moves we got this year you can see there is an unbalanced distribution:

See what I mean? No need to compare these Pokémon to Meteor Mash Metagross, Smack Down Tyranitar and Outrage Salamence, the list speaks by itself.