Letters To Niantic: I’m More than a Collector!

Sending a message to Niantic, one letter at a time... 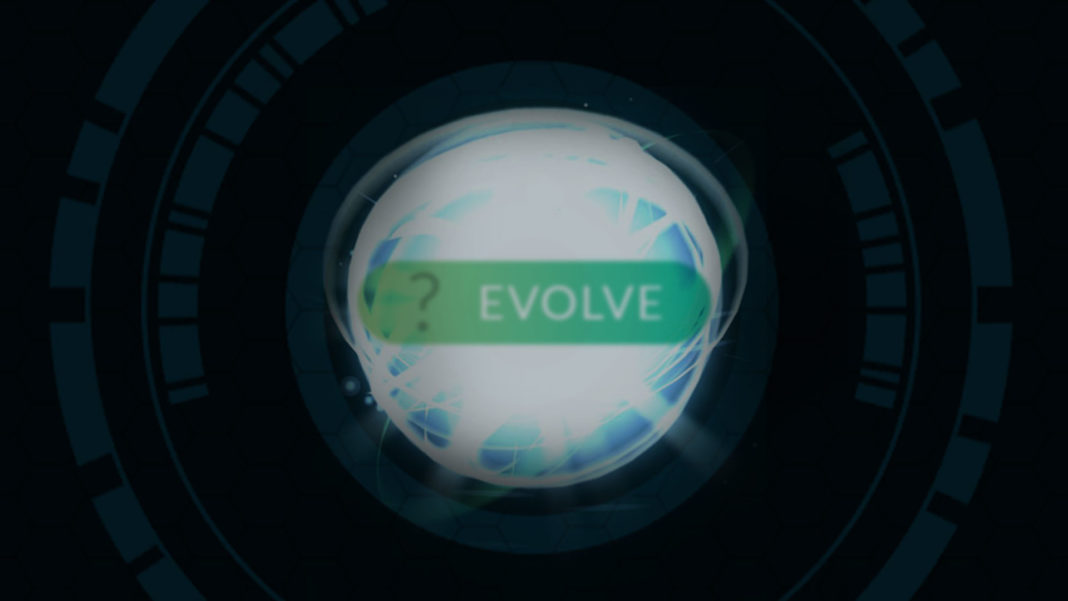 In the convoluted world of opinions, we tend to find Trainers that either praise or bash Niantic for their actions, and unfortunately, we don’t see this stopping any time soon. However, even if we are harsh with them at times, we have to take a break from the hate and spread a bit of cheer.

Letters To Niantic is a brand new series in which individual GO Hub writers take advantage of specific occasions to send a personal letter to Niantic. Each letter is meant to express a little bit of joy or concern in a fun, yet kitschy way. Although you may find yourself giggling as you read, we promise there are valid issues to be understood and addressed.

With evolution taking a bigger role than ever before in Pokémon GO, I thought it was about time to tell Niantic how I felt in the form of a personal letter.

A few days ago I collected my seventh stamp after dutifully completing my daily research tasks. Along with a cheeky wink, Professor Willow gave me a Research Breakthrough box with some Stardust, a few Items, and a Pokémon. This, Niantic, is where you are such a tease!

Now, most of the Community would call me lucky as I got a perfect IV Shiny Zapdos. Yet, I didn’t feel lucky. I was felt sad and somewhat confused about it. In part, because I knew my GOHub family would make me go to timeout because of the highly coveted 100% Shiny Legendary Pokémon, (That’s not true but we do joke about it often) but also because I don’t have any use for my new shiny addition.

The only reason I can come up with to power it up or spend any Stardust on it is completely superficial, and not exactly beneficial. That reason being, showing off my perfect 3527 CP Zapdos like a trophy to my fellow trainers. But the thing is, I like the competitive side of Pokémon GO, I’m not “merely a collector”.

Let me give you an example. I was at Zapdos Raid Day on July 21st where we were able to catch Zapdos with the legacy moveset Thunder Shock. I thought of myself as being really lucky that day! 3 out of the 13 Zapdos I caught were Shiny. (To be honest, I don’t really care about Shiny Pokémon as long they are good, I would take 100% IV Pokémon over Shiny any day of the week.) But, for the sake of the story, let’s say I only caught one Shiny Zapdos and it had the worst IV combination possible (10/10/10).

Now I’m faced with a dilemma. If I want to power up one of my Zapdos to Level 40, I have a decision to make. I have the option of using my sparkly new Level 15 100% IV Shiny Zapdos with Charge Beam or that old Level 20 67% IV Zapdos with the Legacy move Thunder Shock. Not only would my Thunder Shock Zapdos perform better, but it would also save me 21400 Stardust and 20 Candy. The Candy cost isn’t the issue. Mainly because, well, you provide me with Rare Candy like a pinata a child just whacked with a stick. The issue is Stardust. The most coveted amongst all our in-game resources. If I want to power up a random Pokémon for no reason. What do I need? Stardust. If I want to power up a team of Machamps so that I might duo or trio a Dialga or Tyranitar. What do I need? Stardust. If I want to power a REALLY bad IV Lapras for The Tempest Cup. What do I need? You guessed it. Stardust. Yet, in order to collect the Stardust required to do these things I have to go out and grind for endless hours catching Pokémon or hatching Eggs. Then, once I have enough Stardust, I also have to agonize over the decision of if I should actually use it. Will the Pokémon I choose to use it on suddenly become a worthless trophy of ineptitude?

I understand not everyone was able to attend that Zapdos Raid Day and catch a shiny. I understand we are getting a second chance to catch a Shiny Legendary Pokémon, but in my opinion, something like this should be considered and handled a bit differently. Since the introduction of Community Days and Raid Days, we have gained a few Pokémon that have become a viable option in the current meta, but, at the same time, we lost a few as well. Some that were once great are now rendered useless, my 100% IV Shiny Zapdos being a prime example.

Long before Beldum Community Day I was lucky and caught a perfect IV Beldum. Right away I spent almost all of my Stardust and Rare Candy to evolve it into Metagross and power it up to Level 40. It was my strongest Pokémon in terms of CP for a very long time. And now… now it’s just useless. I feel cheated in a way. My once amazing Metagross doesn’t have and can’t learn Meteor Mash, so even the worst Beldum I caught and evolved during Community Day is better than my once prized possession.

I have since vowed to never make that same mistake again. So, now I am hesitant to evolve any of my Pokémon. What if it gets it’s own Community Day? Would it then be rendered useless? When I catch a perfect IV Pokémon I want to be happy. I want to evolve it right away and spend all my dust on it. I want to put it in a gym to show it off to everyone. I want to battle someone with it. I don’t want to think: “okay great, I caught a perfect IV Turtwig, maybe around September of 2020 I will be able to evolve it around noon during its Community Day….” The relationship between Trainer and Pokémon should be a lasting bond. I should be happy and cherish with what I have, not wondering constantly if a better version of what I have will come along.

I like you Niantic, but I like you more when you give Pokémon certain moves like Moltres receiving Sky Attack, so it can also be a great Flying type attacker. However, I don’t like you when you make some Pokémon useless, just like my 100% IV Shiny Zapdos and 100% IV Metagross are right now.

P.S. I still love them even though they are kinda useless 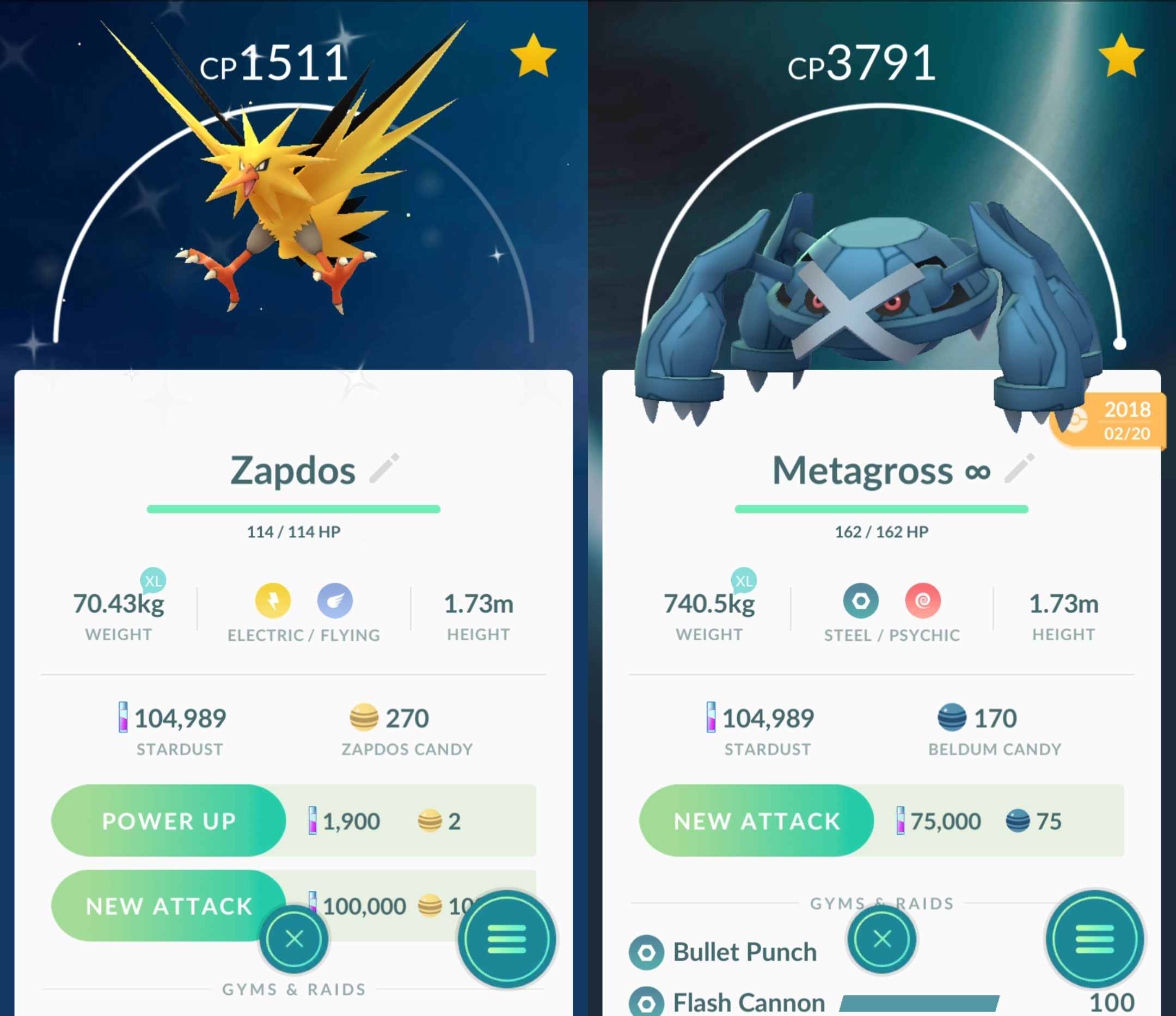 This is just my story and me being really ungrateful about the Shiny Legendary Pokémon I got. But the story raises a bigger issue. My brother, my friend, my community, myself, and most of you, Trainers, are hesitant to evolve some Pokémon because they might get a special move someday in the future. I think Niantic has to do something about special Community Day moves so we are not scared every time we catch a good IV Pokémon or disappointed because that Pokémon already had its Community Day. Be sure to share your thoughts in the comments below!