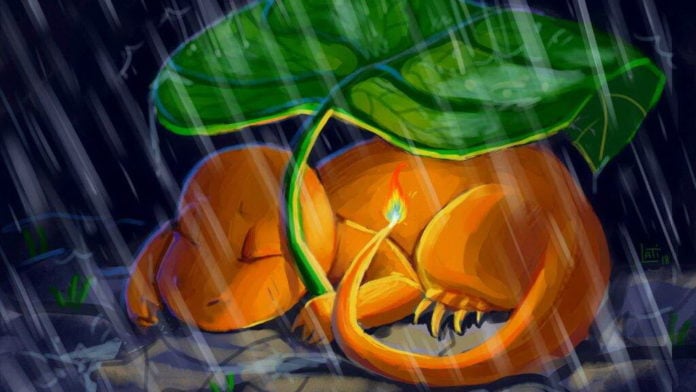 If my interest for PoGo were to be summarized in one picture, it would be Charmander holding a leaf above its tail in the rain. Most of the time, it burns strong. Sometimes, when the wind howls and the rains soak to the bone, it grows small and miniscule in size. The flame almost burns out. Burnout is defined by Merriam Webster as the following:

to cause to fail, wear out, or become exhausted especially from overwork or overuse. Factors that can affect the degree to which someone experiences burn-out include over-saturation, lack of interest, real life obligations (career, friendships, physical/mental health).

Over-saturation in Pokémon Go, for myself, in particular, incorporates several limited time events, legendary availability in raids, and research rewards. Cresselia, while aesthetically pleasing, was not a favorite of mine in battle. I had no want to catch one. And we had a whole month of this floating crescent moon? My interest was waning like the moon itself.

As some of you experience monthly, interest in a legendary decreases with time (barring a safe few). You rush out, raid dozens of times in the first week to two weeks, and you hit a wall. For me, hitting the wall this time around meant hitting it hard. My interest sputtered not only in the raid bosses (Cresselia and Heatran) but in the game itself.

Niantic decided to hit the “LUGIA BUTTON” again for what seemed like the umpteenth time, Heatran came and went with being an okay fire type, and the Christmas CD weekend was a letdown for some individuals who managed to make all previous Community Days (including myself). It seemed, from the outside looking in, that a new shiny was getting released every week in some minor event. It did not help that the seven-day rewards were ‘mons that I had caught, so I lost interest in not only the events that were happening, but even interest in opening up the app, completing a quest, and closing it. I was left in a constant state of ‘meh’ with this game.

It also bears recognition that I started a new job within the Post Office several days following Black Friday. For those Trainers who are not familiar with this ‘holiday,’ Black Friday celebrates the day after Turkey Day with amazing deals on all manners of things. This meant that December, with birthdays and holidays, flew by faster than a Dragonite carrying mail. Adjusting to a new career during the busiest time of that business’s year meant everything else got dropped, which included PoGo.

Lack of interest, which includes the over-saturation and release of events that did not excite me with shinies that, IN MY OPINION, just were not worth catching, hit an all-time high. Coupled with a new career, I couldn’t have cared less about the game. Weeks went by without opening it. Gifts lay dormant, people complained IRL about not receiving gifts, and I just shrugged it off. I honestly could not have cared much less.

But what brought me back? Why am I writing this article if I have no interest? It is because that interest is back. I recently tracked down a Shieldon for the first time earlier tonight, and I flashed back to the yesteryears of having a shadow in my Dex. Dear GoHub friends and staff reached out and let me knew that I was part of the team. I read an article that referenced an article I wrote, and I saw pictures of my trip to Go Fest 2018, and it almost made me cry (okay, it did, just a little). All of this and more reminded me of what brought me back to the game in the first place: friends, family, and experiences that I would not trade for any amount of Pokécoins.

This game will be here if you take a break from it. Don’t burn yourself out as I did. Pacing yourself with PoGo indeed highlights all of the great parts of the game, and no one can decide to set that pace except yourself.

May your Sky Rats (Pidgey) be shiny, your raid bosses a Wonder, and your battles with the team leaders yield Sinnoh Stones every time.