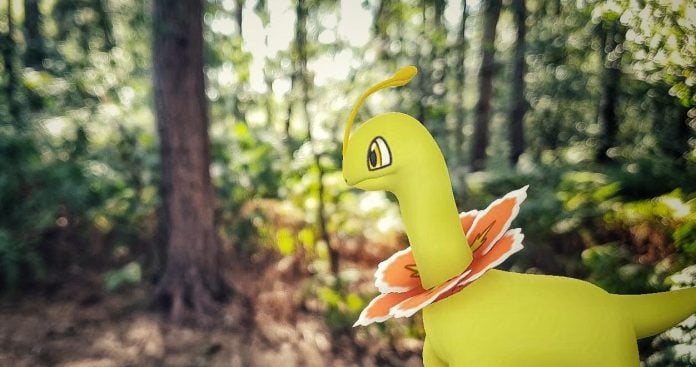 We are getting through the release of shiny Pokémon in Pokémon GO at a fairly speedy rate these days, and after looking back to the Kanto event last year, it got me thinking, what Johto shinies aren’t available in game yet? Johto is the second generation of Pokémon, and if hypothetically  a Johto event was held like the Kanto event, there aren’t that many Pokémon left to release shiny!

Hoothoot is a really great golden shiny, and one I am surprised we haven’t seen yet in Pokémon GO! As a Normal and Flying type it has struggled to fit into an event theme to be released, but I really hope we see it soon. Noctowl has that slightly green tinge we often see with the more golden shinies, but Hoothoot is a really bright yellow gold and so fun!

As shinies go, Spinarak and Ariados are top tier IMO! Seeing shiny Pokémon with drastically different colours from their originals is always so fun, and these two are really bright and unique. A lovely baby blue for underappreciated cutie Spinarak, and a bright pink with a nod to the baby blue for Ariados, fun! These two would be perfect for any sort of Bug Out! type event.

These three are another really excellent set of shinies! Bright, obviously different from the original colour ways, and super fun! I have a particular soft spot for the delicate pink of Jumpluff, but the really bright green and pink of Hoppip and Skiploom are fantastic too.

Girafarig is a bit of a marmite sort of Pokémon, and it is a bit of a lacklustre shiny compared to many of the ones that make this list. With just a change of hooves, snout and mane to blue, and maybe a slightly darker orange colour on the body, they could have been so much more fun! As a Normal and Psychic maybe we will see the shiny release during the Psychic Spectacular? But who knows!

In my opinion, Slugma is one of the absolute best shinies in the whole game. I love that grey colour! It is really unique and different, there aren’t many silver or grey shiny Pokémon, and it really suits Slugma. Magcargo is also fun, with a hot purple with pink molten lava dripping from their shell. I just love these two!

Corsola was originally set to be released in July 2021 as part of the Pokémon Air Adventures Event, but due to the pandemic situation this has been delayed with no mention of it being rescheduled currently. Hopefully in time this event will happen and this lush blue shiny will be released!

As one of the weirder evolutions, (a fish into an octopus?! How?!), these two are a bit neglected, and don’t seem to have many fans. If you are a fan, please tell me, because I’m not sure I’ve even seen a Remoraid stan! Remoraid gains a really cool purple look, whereas Octillery becomes a sort of slightly brown toned golden shade.

Mantine hasn’t yet made an appearance as a shiny, but will we have to wait for Mantyke to be shiny and evolve it, or will it be a wild shiny like Snorlax? Not all baby Pokémon have their wild evolved counterparts released shiny, so it will be interesting to see how they release Mantine.

While shiny Phanpy is just a slightly lighter colour, Donphan is a really cool bronze beast! I know Phanpy and Donphan have some serious stans out there who can’t wait to see them released as shiny in game, especially Tom from TheKruseShip, so hopefully we see them soon!

With shiny Hitmonchan and Hitmonlee being released, I thought potentially we could have seen Tyrogue and Hitmontop making an appearance relatively soon after, but not so far! With grey toned bodies, and different coloured outfits, they are quite starkly different shinies, even if not necessarily the most exciting.

With only 18 Pokémon from 10 families not yet shiny, we haven’t got much more of Johto to be introduced! There are some really great shinies in this list that I know people will be hyped about, and it’ll be interesting to see if some are released during events, or if we get a Johto ticketed event like the Kanto event in the future that releases all the remaining shinies!

Which are your faves from Johto that we haven’t seen yet? Let us know in the comments!