You may find these heavyweights appearing more frequently in the wild!

With two new shinies coming in, the pool of Fighting-types that can be shiny has essentially doubled and now features four shiny families.  For sake of brevity, we’re only including the base evolution forms in the shiny table below: 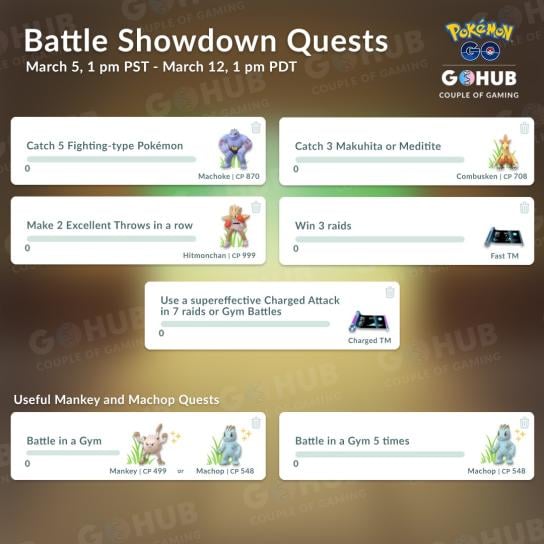 The Battle Showdown event is an excellent opportunity to farm Stardust, hunt for specific shiny Pokemon and perfect your Fighting team. Considering the large number of different bonuses, we’re sure this event will be appealing to a large number of players.

Catch Stardust is doubled, which ensures a solid influx of dust throughout the week, which can easily be boosted further with the occasional Star Piece. With raids rewarding double Stardust, you’ll have something to do even if you don’t enjoy the PvP heavy aspect of the event.

On the other hand, Trainer Battles are the real star of this year’s Showdown, with Rare Candy rewards available from both regular PvP and from fighting Team Leaders. We know that a lot of our readers don’t enjoy PvP as much as raiding, but a Rare Candy is always welcomed! Prioritize finishing up your daily Trainer Battles before heading out to shiny hunt, that way you can have solid separation of concerns while farming.

Seeing as this event is focusing on fairly rare Fighting types, I’d say it would be a good idea to catch as many as your Poké Ball stash and storage allows. Machamp is a beast in raids, Hariyama is a solid team member, Medicham is great in a number of PvP match ups.

Here are some key areas we think you should focus on during the event: