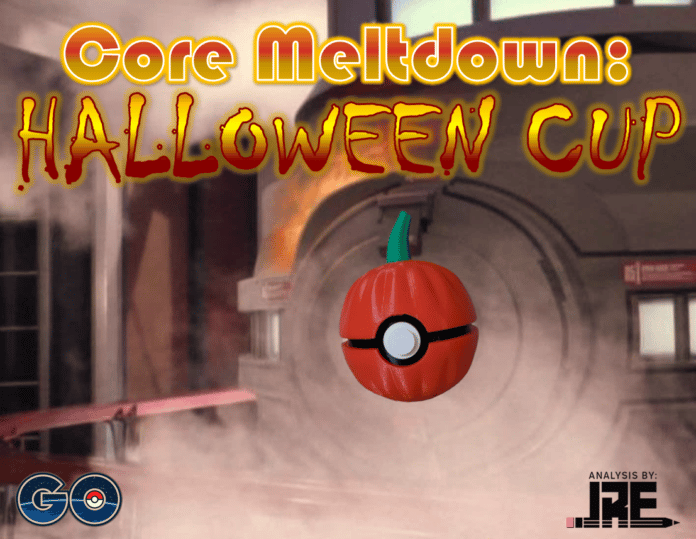 While for the better part of three years of analysis and 300+ articles on PoGO PvP, in 2022 I finally began an honest-to-goodness new article series diving into recommended “cores” to build a team around. And today, I’m going back and doing it for another past format returning to PvP: Halloween Cup (returning… well, basically NOW, on Tuesday, April 5th at 1:00 p.m. PDT). Not ALL cores are covered here, of course, as there will be plenty of other homebrewed ones… and that’s a good thing! This is simply intended to give you just a few of the big ones (and some spicy alternatives!) to get you started on making your own awesome team… and/or gearing up to combat the more popular teams out there!

What is a “core”, you ask? Simply a group of Pokémon that work well together on a team, covering each other’s weaknesses and responding well to the bigger threats in a particular meta. Sometimes a core will be defined as three (or even more, in the case of “show six, play three” formats like The Silph Arena) Pokémon that synergize together, but usually we’re talking core duos. And that’s what I will focus on here: pairs of Pokémon that can make up a solid core to build your team around. And for the visually inclined, instead of linking to a bunch of sims, I’m going to link to graphical representations of what those cores can (and cannot) handle in the Little Jungle Cup meta, heavily utilizing PvPoke’s fantastic Team Builder tool. Strongly recommend checking that tool out if you haven’t already!

And with all that out of the way, and time basically up before the Cup arrives, let’s gooooooo!

Some of the best and (in most cases) likely-to-be most popular cores in the Cup. While you may not run these yourselves, study them hard to at least know how to break them! These cores include (but are most definitely not limited to): 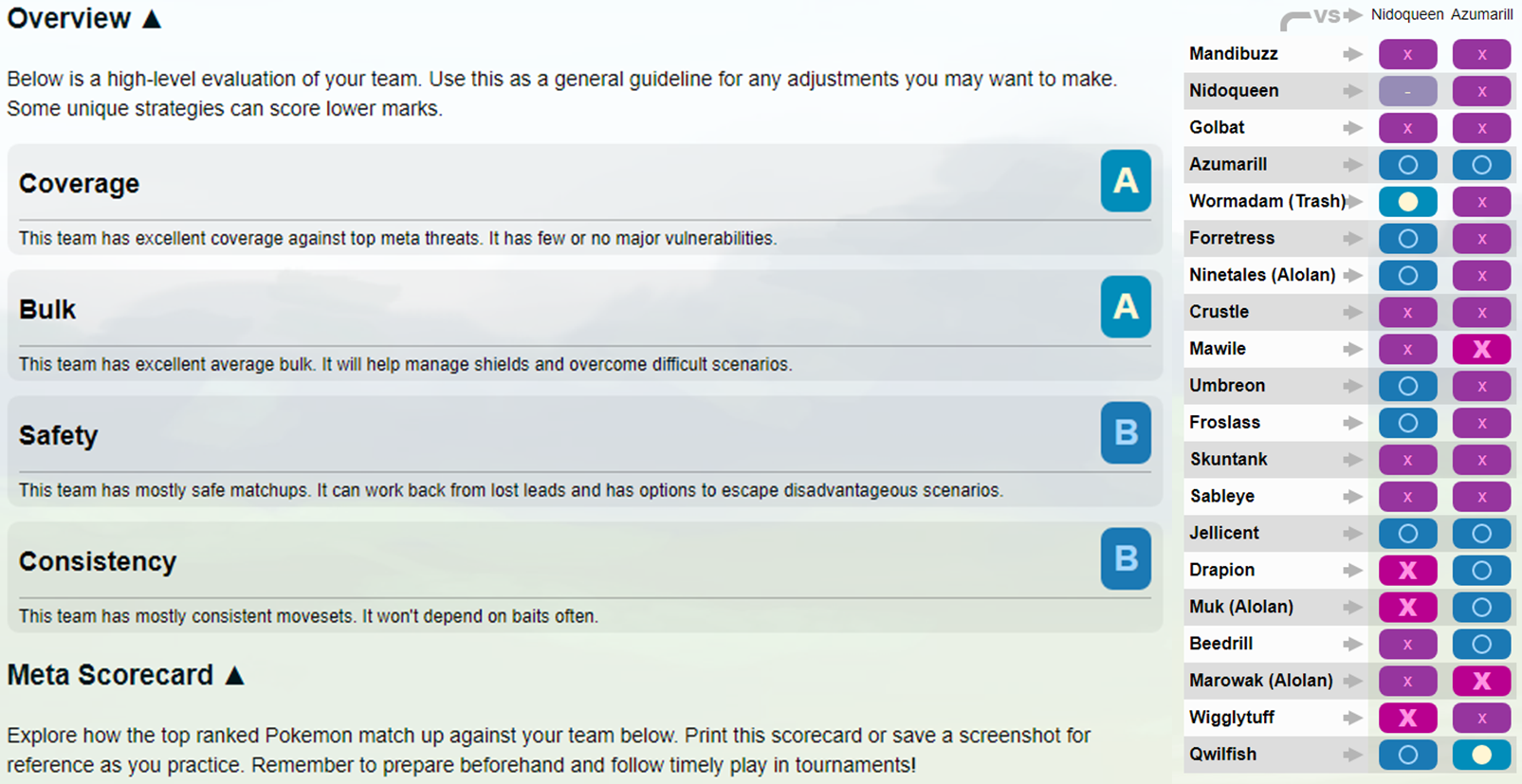 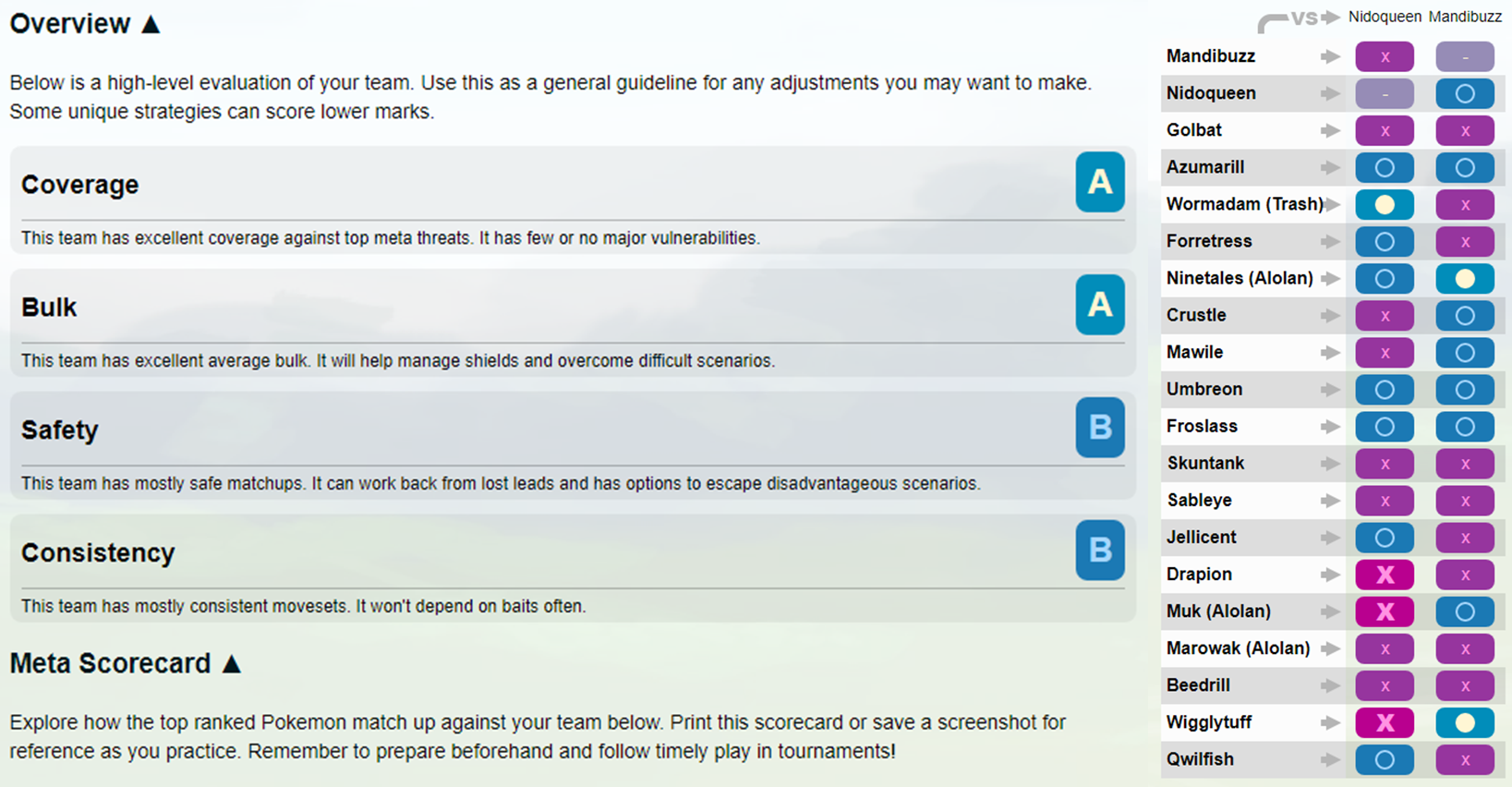 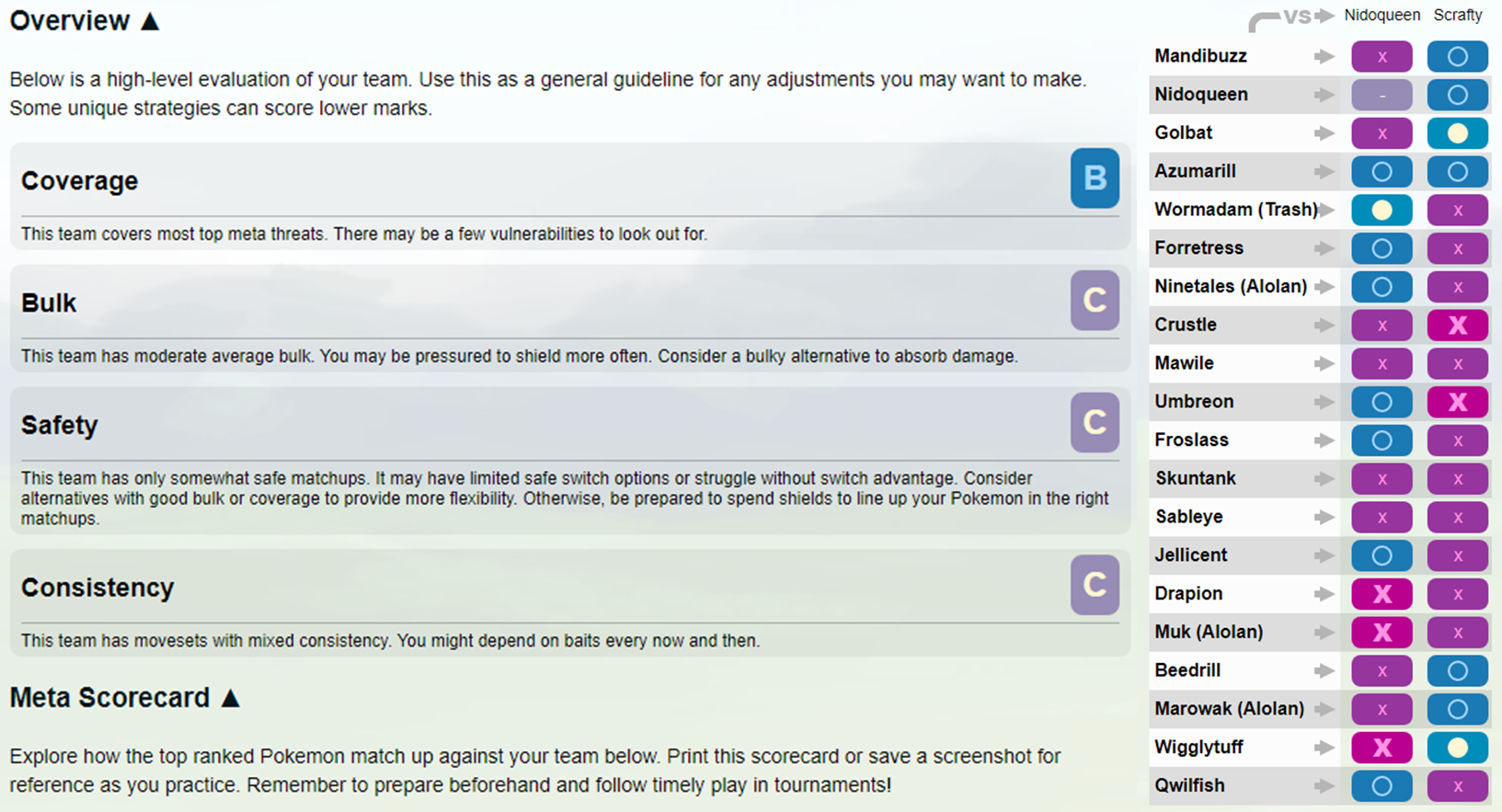 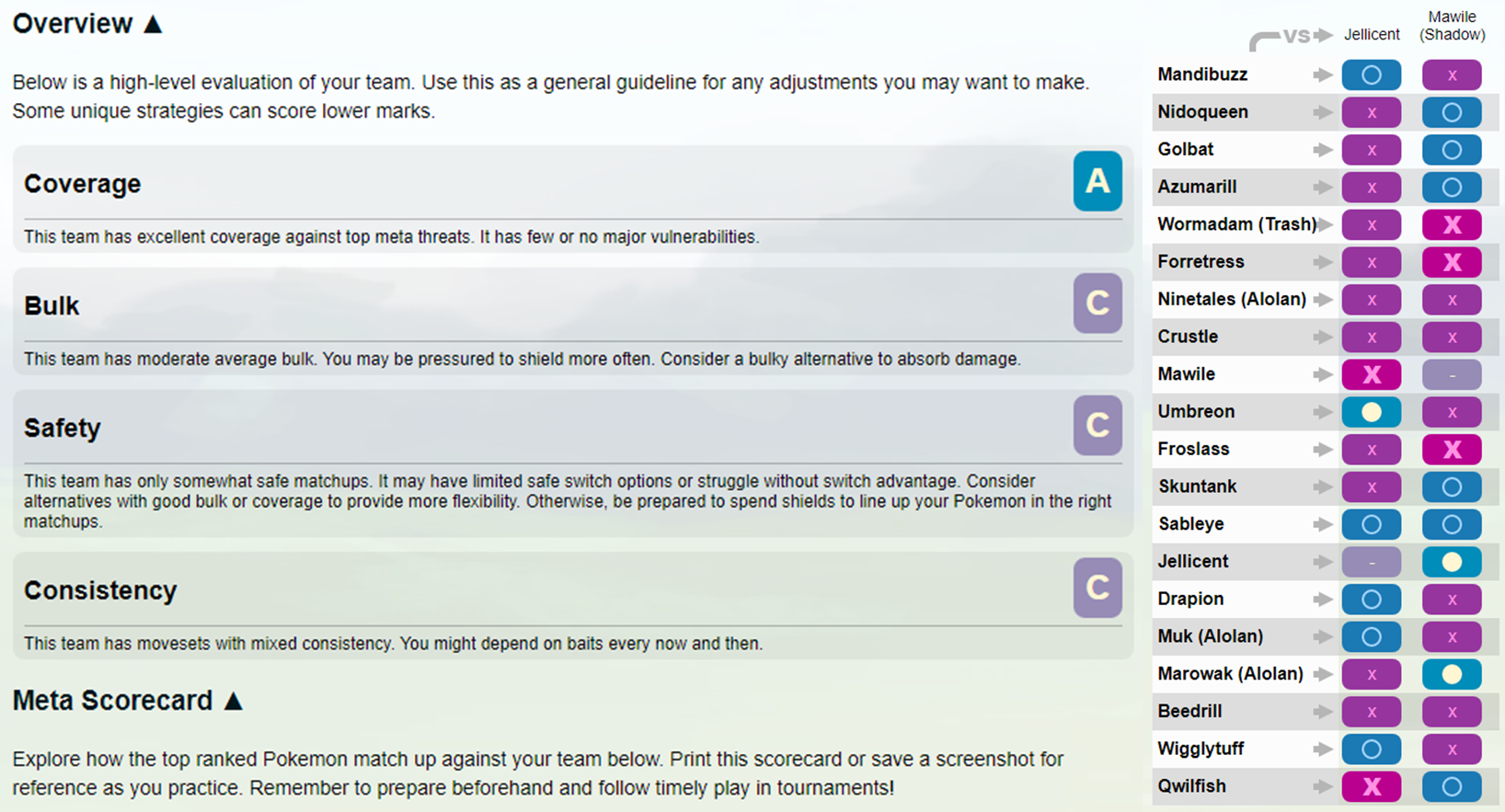 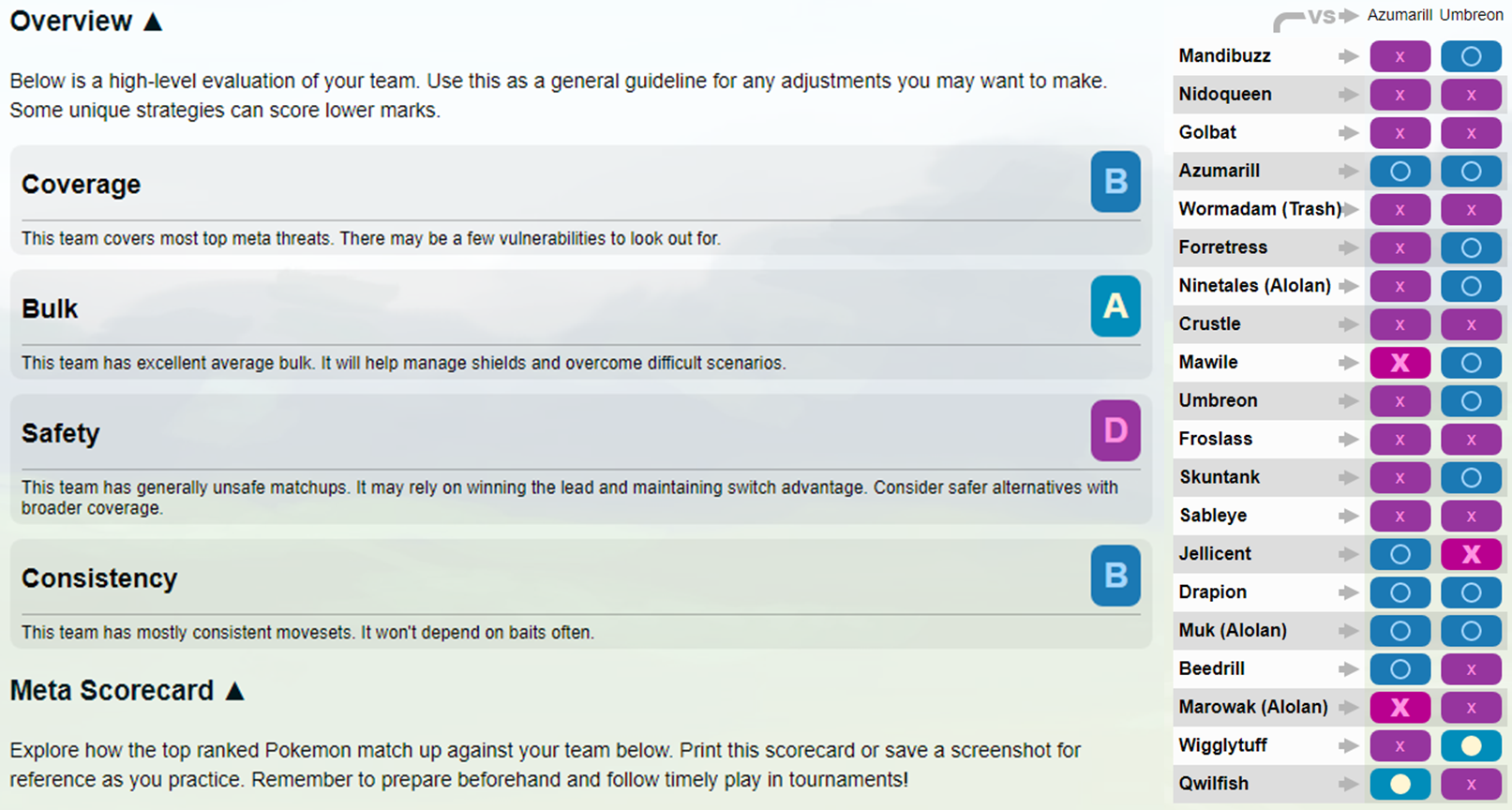 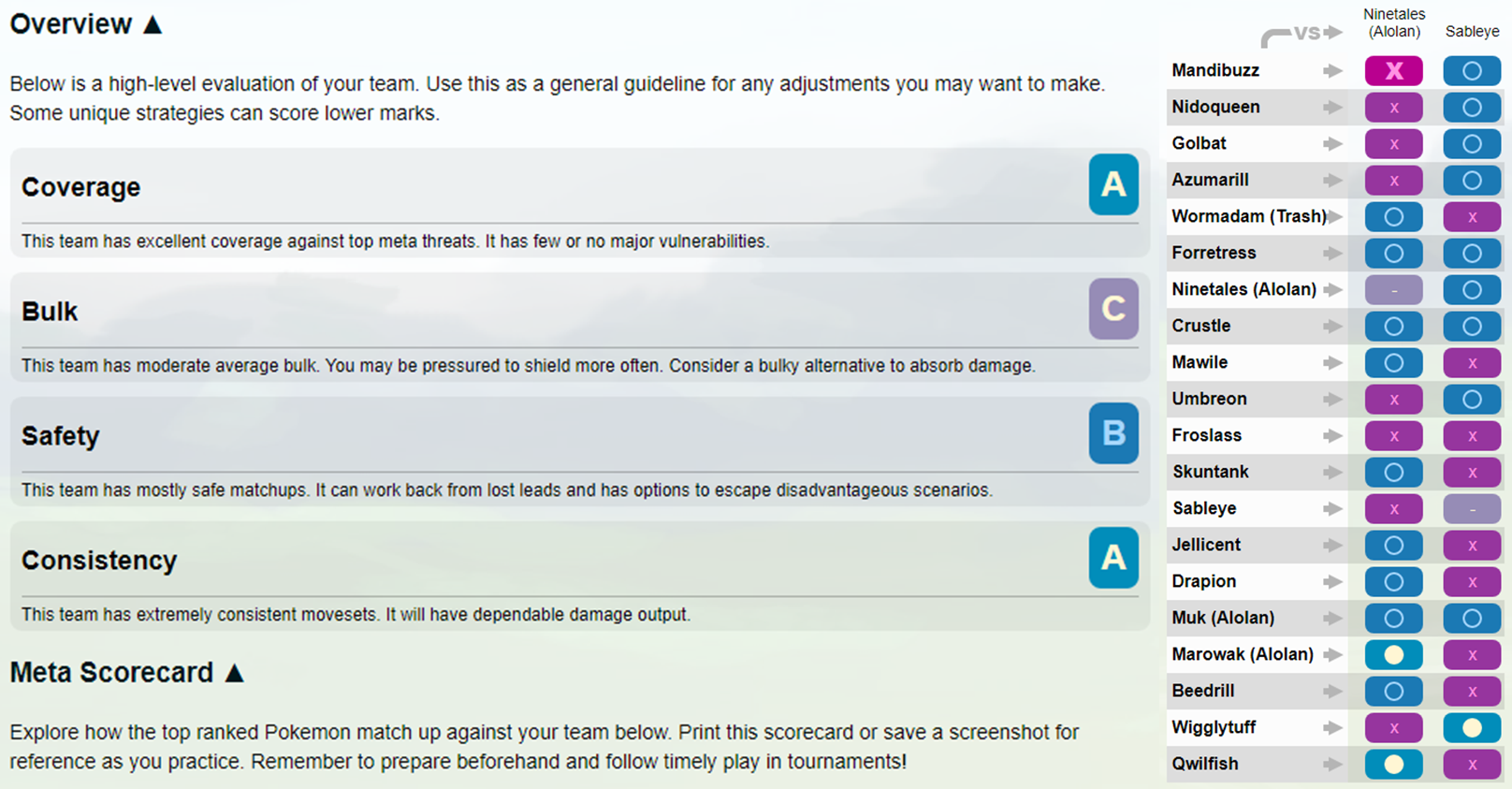 The beginnings of your “ABB” cores, overloaded with a pair of similar Pokémon and a “pivot” intended to handle their hard counters. 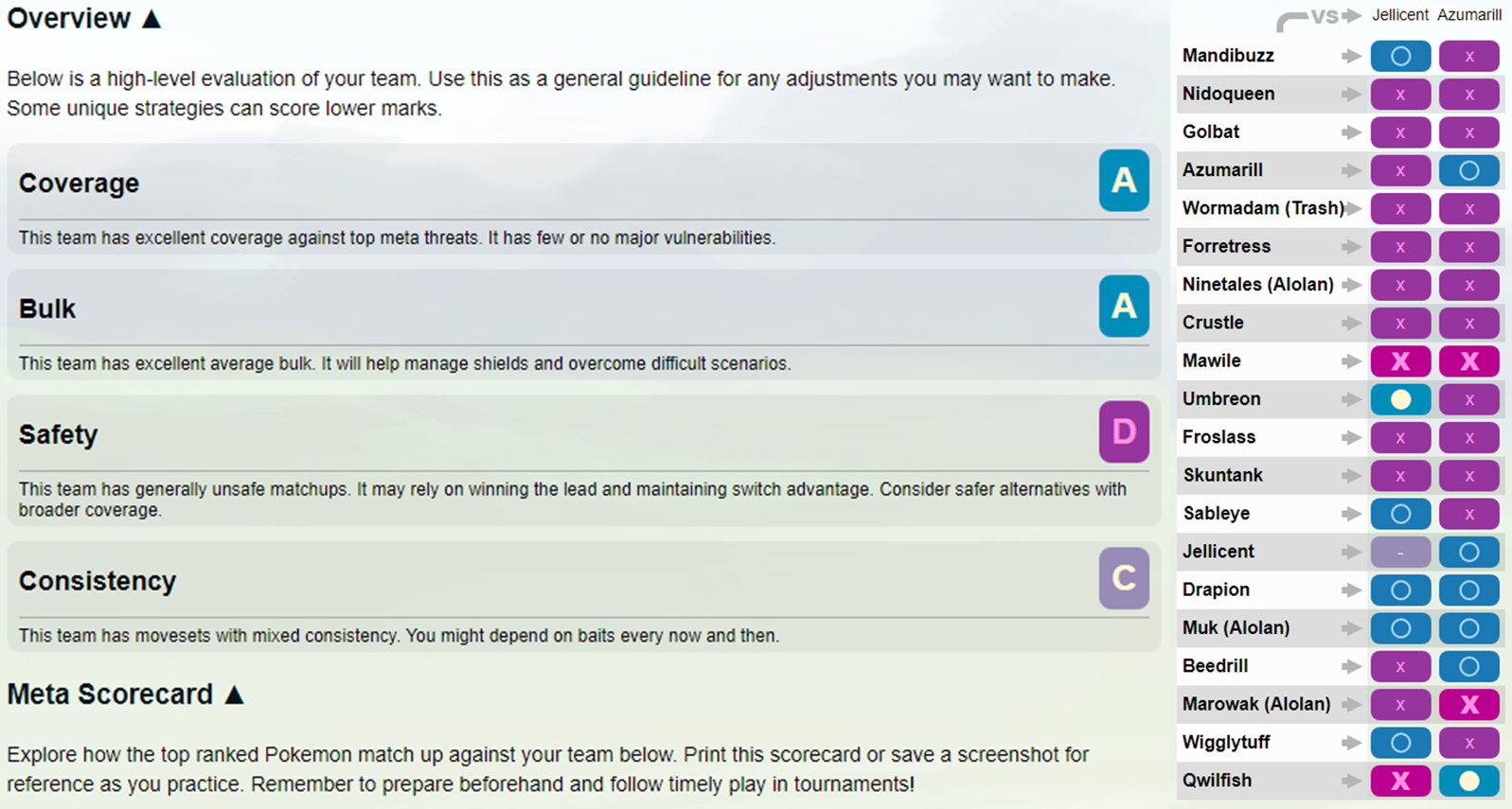 THE ROCK AND A HARD PLACE – Crustle + Tyranitar 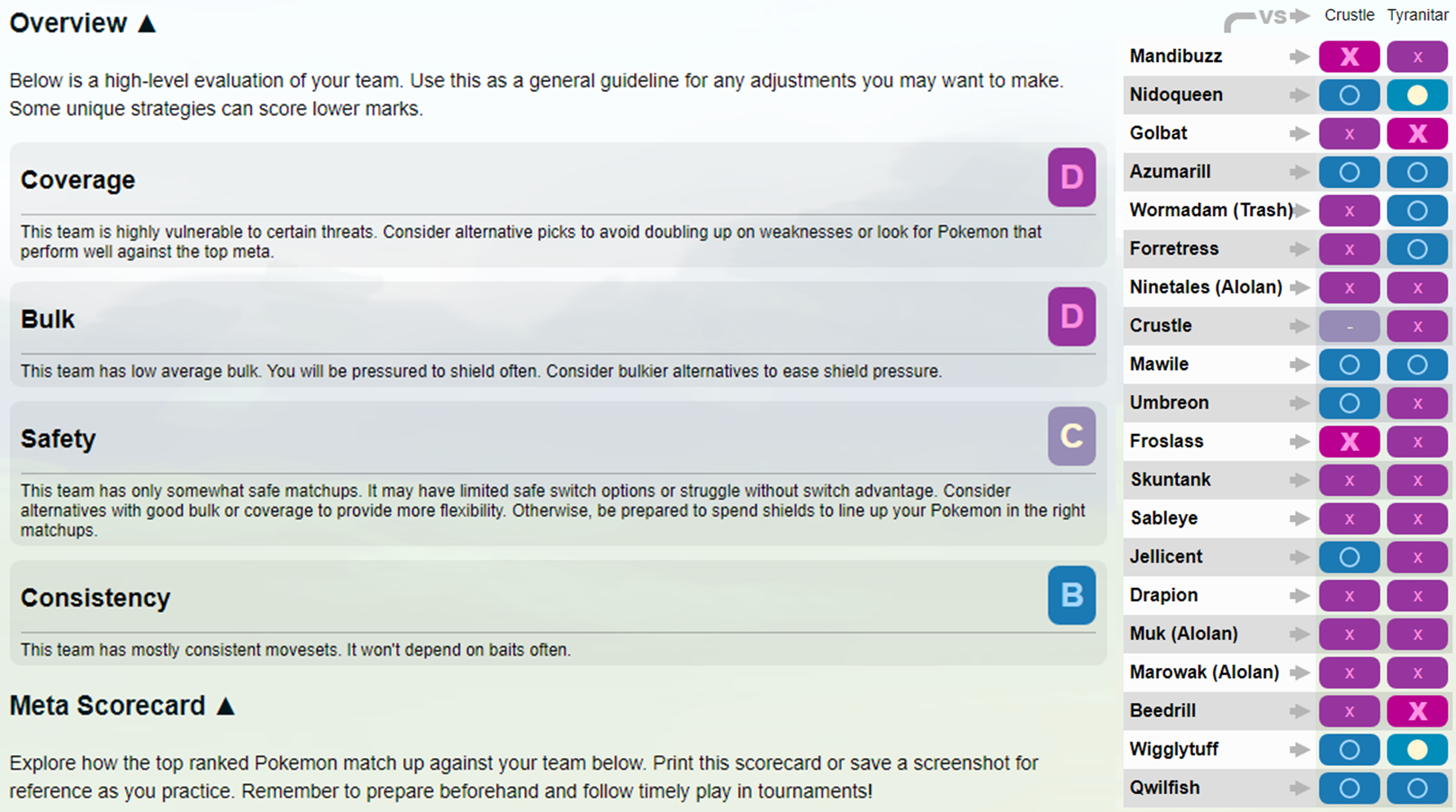 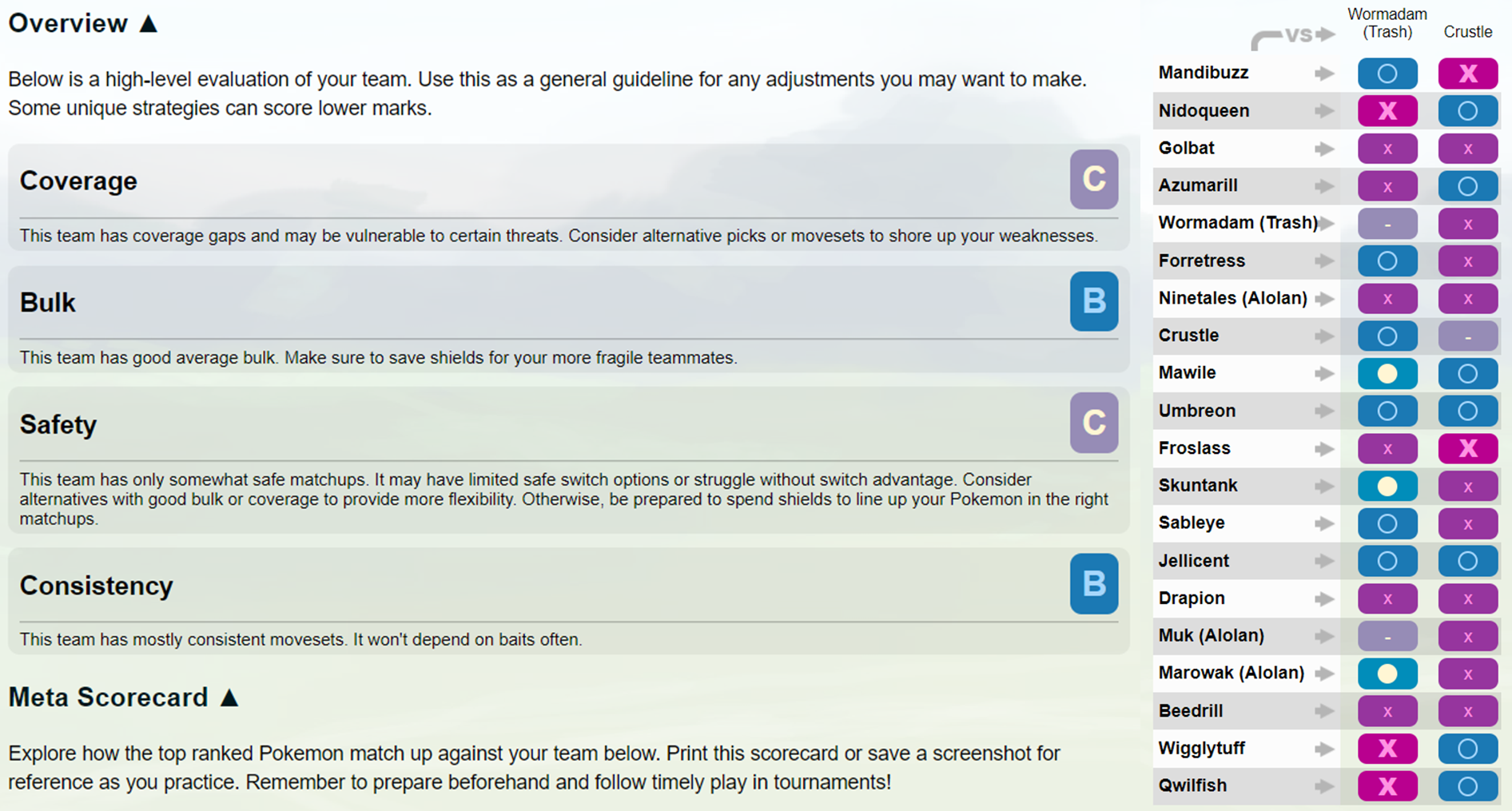 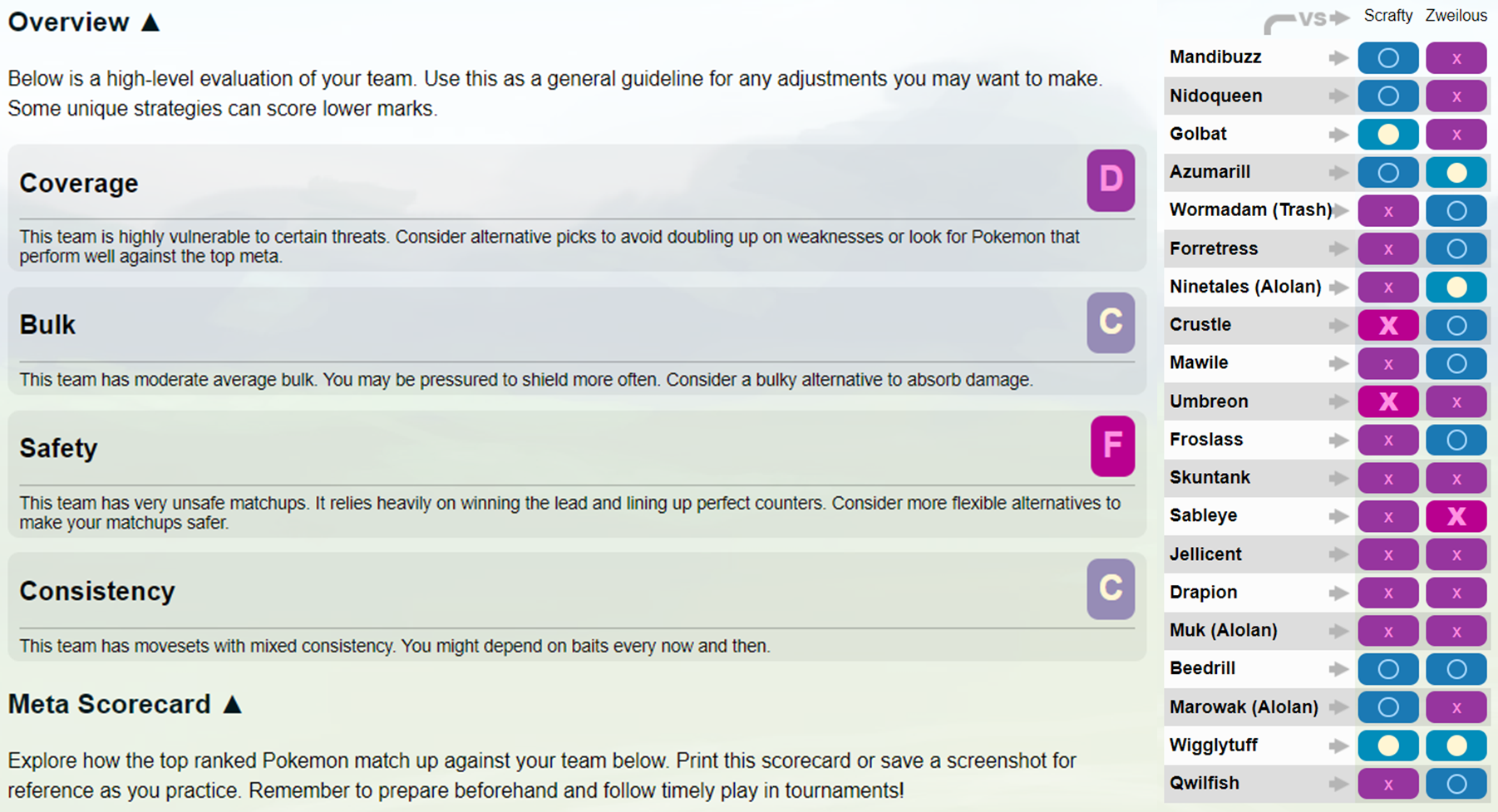 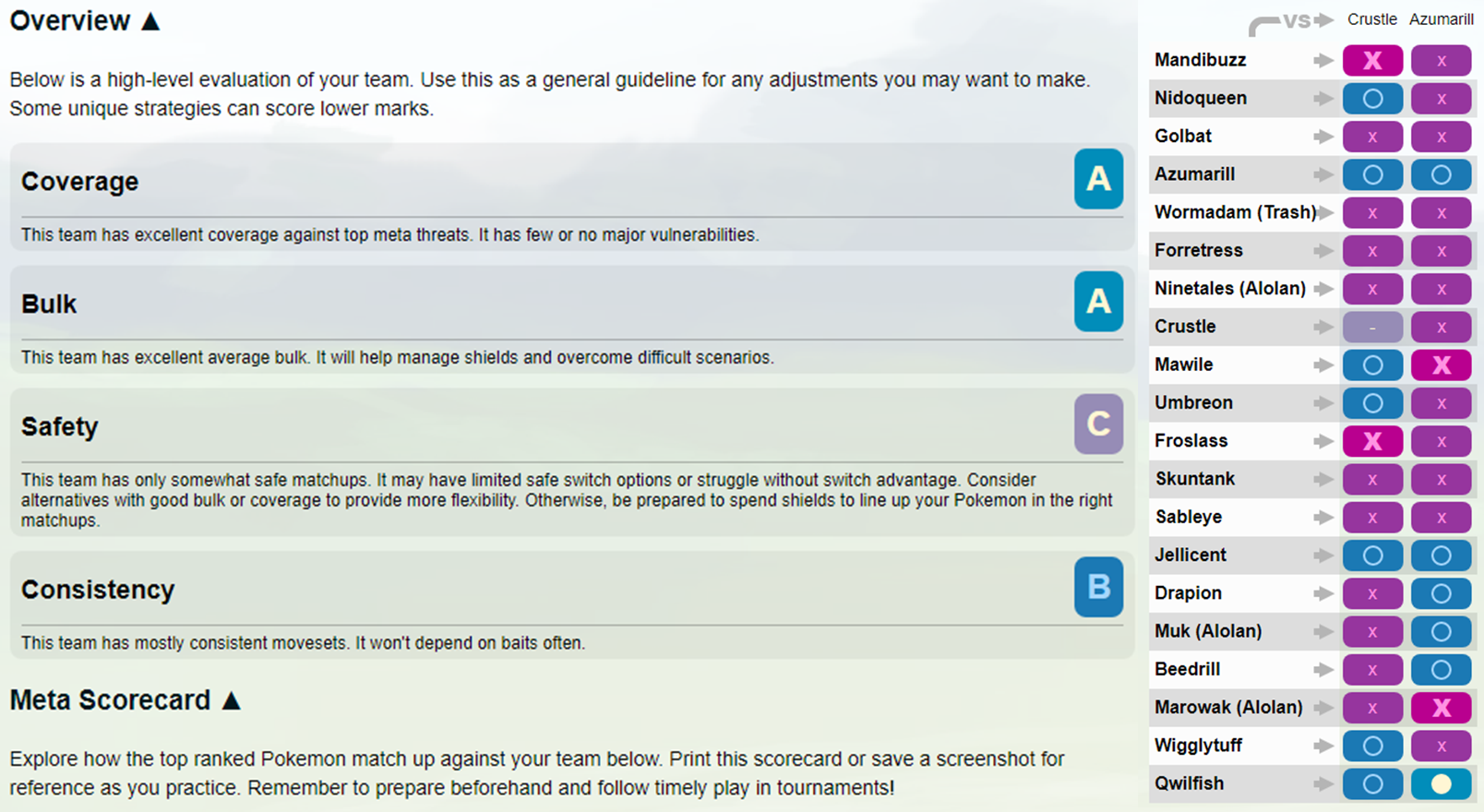 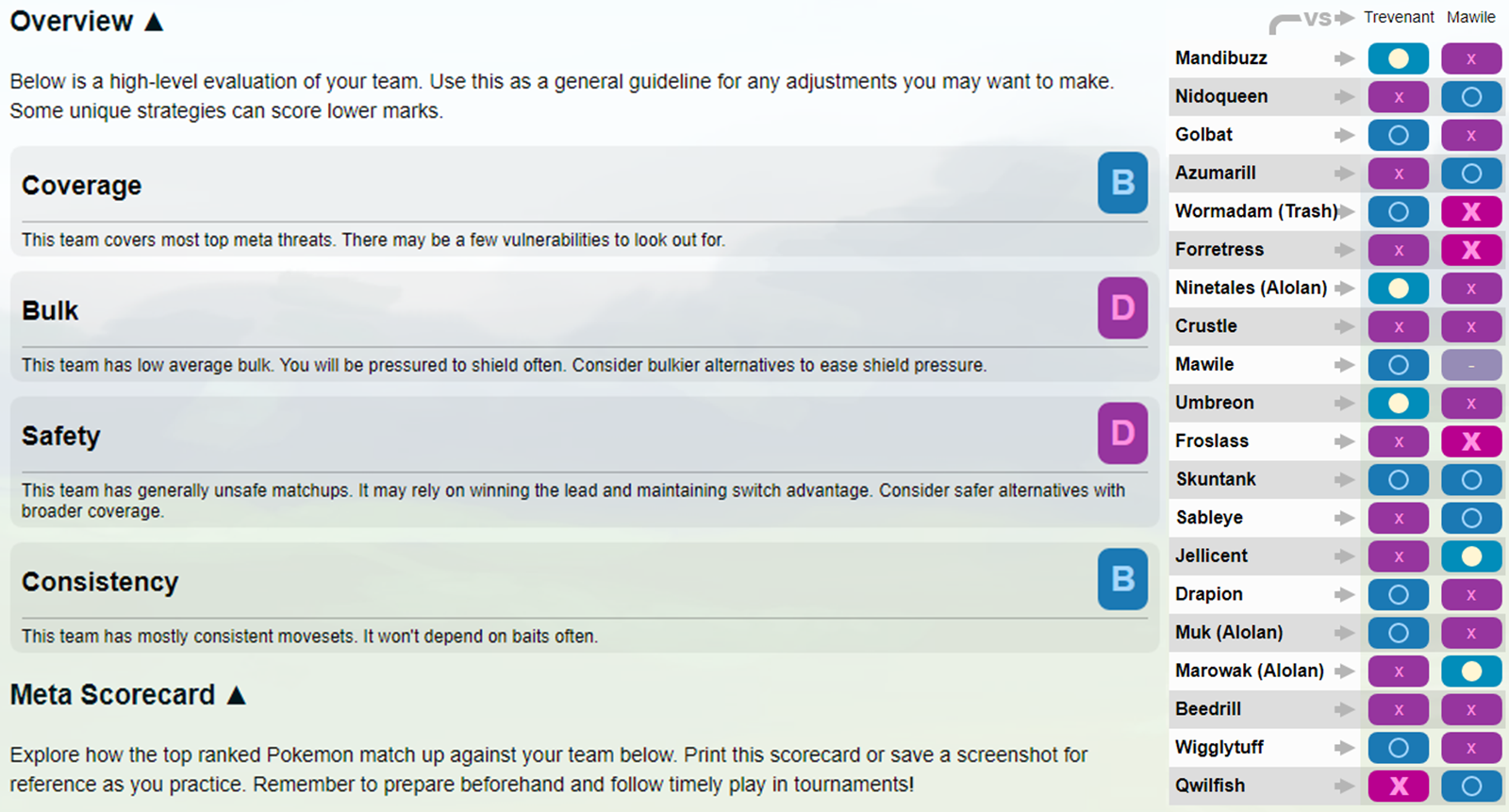 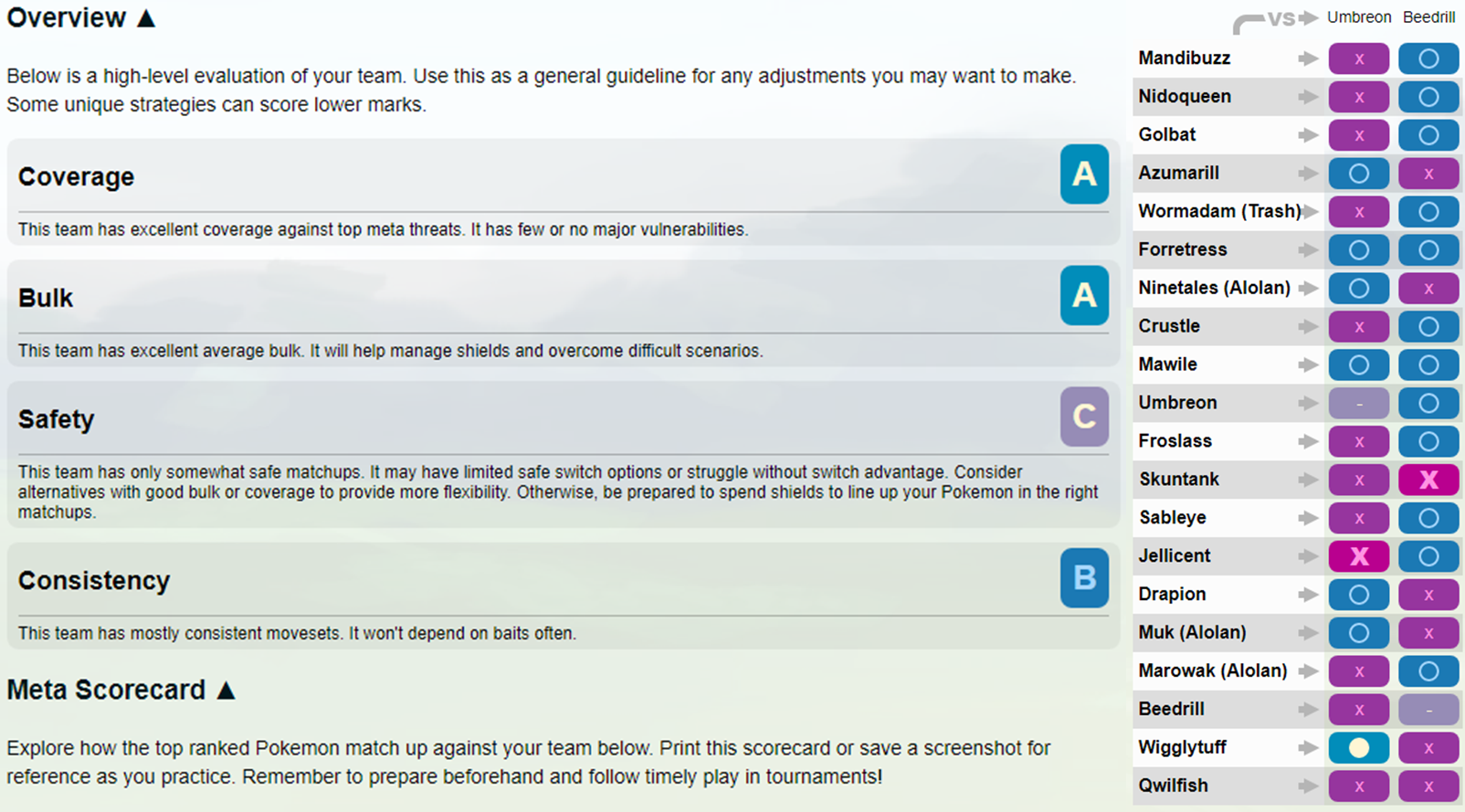 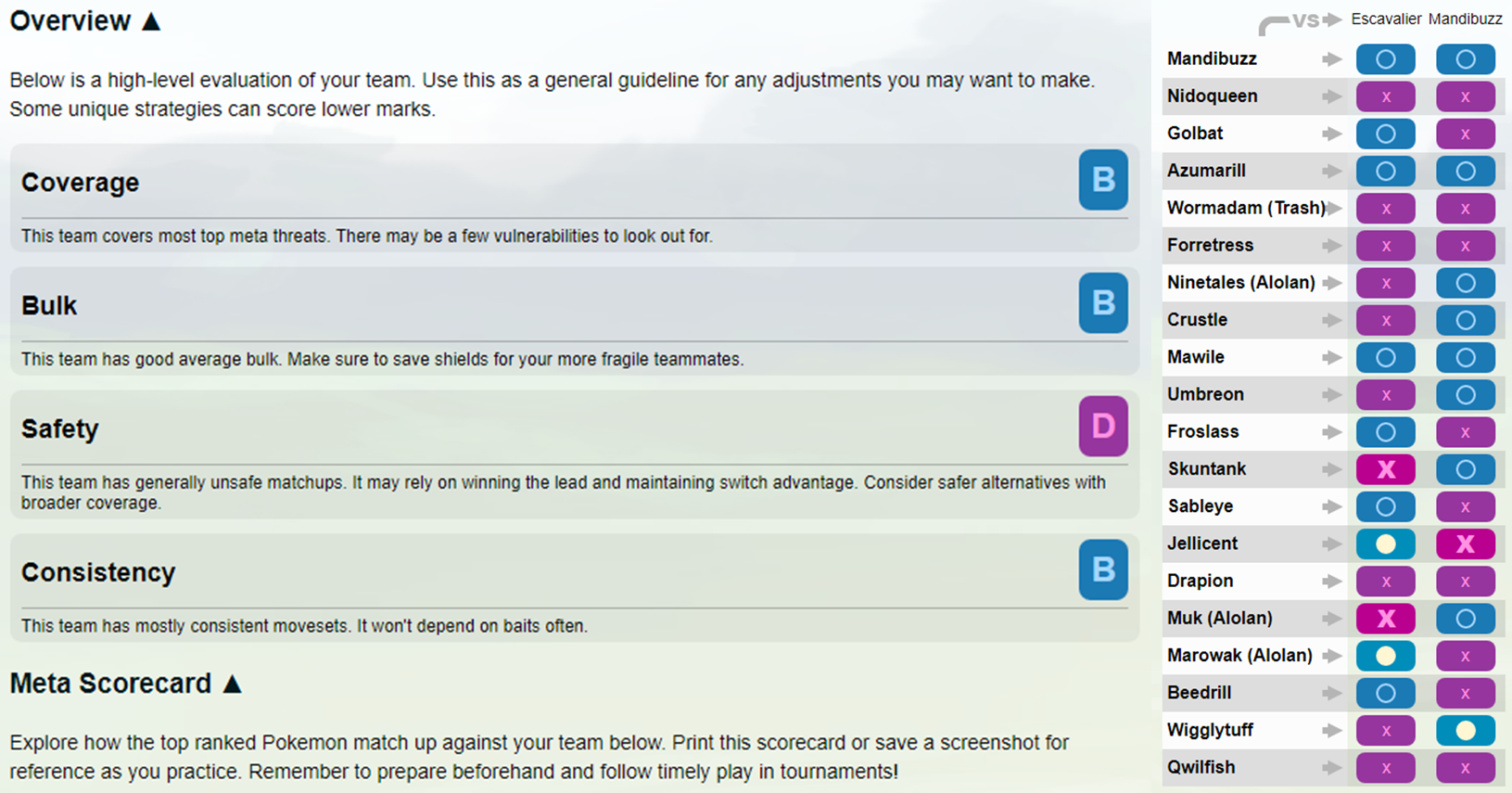 Just like on Star Trek, when in doubt, just eject the core! Here I try to highlight some good corebreakers you may or may not have thought of. These can make good third Pokémon with some of the above example cores, or might be worth building your own unique team around. Either way, if you’re getting railed by a popular Pokémon or two and don’t know how to fend it off, you can try turning to some of these.

As I mentioned at the top, this is NOT fully comprehensive. Some of these cores and Pokémon are definitely ones you’ll come across, and some are more off the wall and you may never encounter at all… and there are perfectly viable cores and teams that don’t follow ANY of these recommendations. But all are intended to get your own creative juices flowing and give you a starting point to make whatever team works best for YOU. Because that’s what this is all about, right? Finding a team that fits your own style, doesn’t have too many gaping holes, and is FUN.

I also modified my meta/budget overview of the format — “Nifty Or Thrifty” — ahead of time, so be sure to go check that out too. Between that and now this additional guide, I do hope I’ve help put you on the path to success this coming week. Best of luck!

Thanks for reading! Stay safe out there, Pokéfriends, and catch you next time. Cheers!