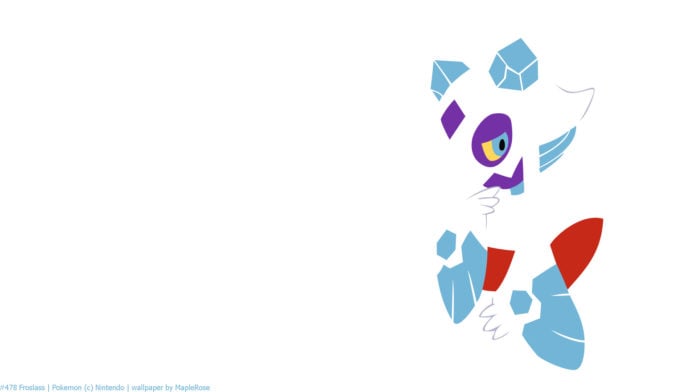 Pokémon GO Froslass is an Ice and Ghost type Pokémon. Froslass has a Max CP of 1857, with a Attack stat of 171, a Defense stat of 150, and a Stamina stat at 140. With this combination of stats and the competition it faces from other Ice and Ghost types, it will see use only as a Dex Entry.

Froslass evolution requires a specific gender, much like Kirlia to Gallade. In this case, you will be needing a female Snorunt and a Dawn Stone. However, it is not known whether gender specific evolution (or even Dawn Stones) will be required when Generation Four comes around. Froslass requires 50 Candy to evolve.

Froslass will face fierce competition from both types. Current Ghost types certainly won’t boo-st its chances of being seen, and Ice types from Generation Four will stop it in it’s tracks. Here are the stats of some of it’s major competition.

There is no nice way of saying it – Froslass is a bad Ice type. And there are more Pokémon that didn’t make it on this list (Walrein, Rotom-Frost, Piloswine, and Abomasnow). Walrein and Abomasnow overshadow Froslass in every stat, Piloswine nearly does (barring a lesser Defense by three points), and Rotom-Frost is set to follow in Piloswine’s little furry steps.

If you have any access to ANY of the above Pokémon, they are likely a better choice than Froslass (barring type effectiveness). Jynx, Articuno, and Lapras can run double ice moves, and Regice and Glaceon are set to be the same way. Even if they don’t obtain an Ice type fast move, they will still be better than Froslass. Let’s move onto Ghost types.

Again, Froslass is at the bottom of the barrel. While it might be a better choice then Sableye, that’s not saying much. Giratina blows everyone out of the water (graveyard?) with an astounding Defense and Stamina combined total. While Gengar takes the top Attack stat, Mismagius has an equally respectable Defense stat. Drifblim will be an annoying gym defender, and Banette is just a better glass cannon (for those on a budget).

As with the Ice types, if you have access to any of the above Pokémon, use them instead! Namely Gengar, Mismagius, and Giratina.

And if you decide to consciously use Froslass, you should do so against Flying, Grass, Ground, and Dragon for it’s Ice attacks, and use it’s Ghost attacks to take out Psychic and other Ghost types.

Based on it’s prior evolution (and Glalie) and what moves it can learn from the main series games, Froslass will likely (not confirmed) know the following moves (many thanks to Bulbapedia for having the level-up moveset!)

Cloudy, Rainy, and Windy weather have no affect on moves that Froslass uses or super-effective moves that are used against it.

Shiny Froslass has a magenta(?) ribbon around it’s waist as opposed to the blood orange on the Normal Froslass. In addition, the ice on it’s ears are a darker blue. Expect to see an influx of shiny Froslass in gyms when this Pokémon gets released, as it’s prior evolution has been deemed worthy of having a released shiny.