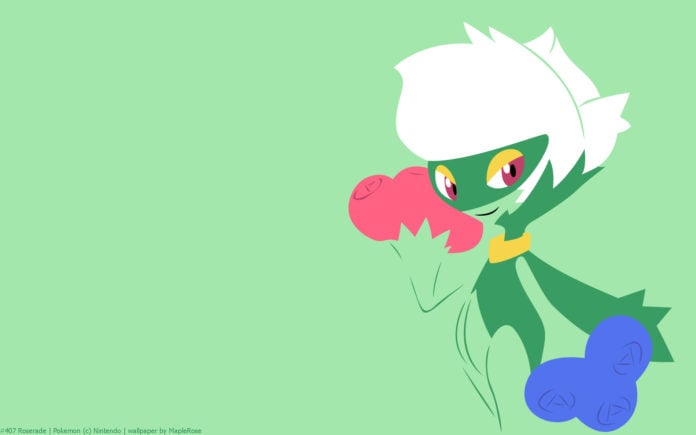 Pokémon GO Roserade is a dual typed Grass and Poison type Pokémon, and is one of many that evolve from a previously introduced Pokémon. It evolves from Roselia (Roselia also gains a ‘prevolution’ in Gen4, in the form of Budew), possibly when exposed to a Shiny Stone evolution item . It will likely also require 100 candies to evolve, in line with almost all other third stage evolutions.

In this chart, we will look at Roserade’s stats compared to some of the other prominent Poison and Grass types in the game.

Roserade’s Attack and Defense stats are up there with the top Pokémon on this list, but its Stamina lets it down. Roserade certainly won’t contest the other Grass types leading the fight against the Water, Rock and Ground types after Gen 4 is released.

Roserade may however, be the strongest Poison type once it becomes available. Poison types don’t have much type coverage or prominence in the current meta game, but with dual Poison type moves, Roserade could at least be a useful attacker against the stronger Grass and Fairy types, like Tangrowth, Gardevoir, and Exeggutor.

Though there is no way to know for sure what moves Roserade will have, as it has a wide number of moves to learn and Pokémon Go always likes to throw curveballs move-wise. We can look at its main series movepool, the moves Roselia and other similar Pokémon already have access to, and other Grass and Poison moves already in the game, to compile a list of possible movesets:

If/when abilities are introduced into Pokémon Go, Roserade may have access to Natural Cure, Poison Point and Technician.

With weaknesses to five different moves types, Roserade has more factors to take into account while looking at the weather. In weather that has pros, use Roserade all you want and let it tear through its enemies, but in the weather with cons, avoid using it against foes that may have super-effective moves.

The chart below will help you visualize what weather is beneficial or harmful for Roserade.

Shiny Roserade is quite similar to normal, except the difference in colour of the flowers at the ends of its arms; the red one becomes a light pink/purple, while the blue one becomes grey

Roserade’s Pokédex entries from various games tend to focus on it’s strong leaning towards its Poison type abilities, which is appropriate due to that being it’s main place within the meta game; as a Poison type attacker: