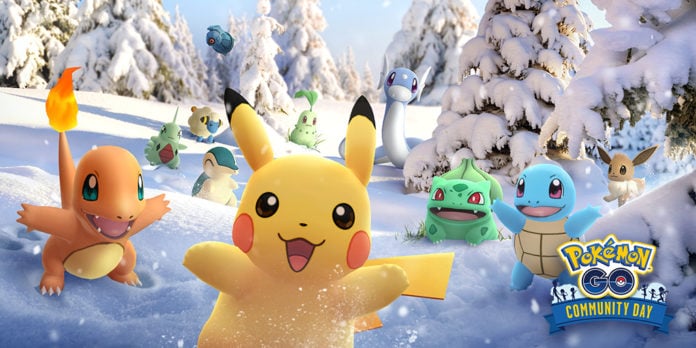 December Community Day is coming to Pokemon GO this weekend! Settle in Trainers, this is going to be a long one and it will not be anything like our usual guides for Community Day because we have a lot to cover this time around. After all, it is featuring multiple Pokémon, and unlike previous CDs, it lasts the entire whole weekend (with a few gotchas).

Exclusive moves and increased shiny rates will be available through the entire weekend, so don’t stress about that. We got you covered with 100% IV search strings, Pokemon tier list and general event guide.

The December Community Day reunion starts and ends like most any event, synced to times in Pacific Standard Time, but the catch is that there will be extra bonuses during Community Day-esque hours (If any more time conversions are needed, use this site here):

This will be a drain on your bag space moreso than any event prior. If you wanted to maximize all of your gains, you will need all manners of berries, star pieces, Pokéballs, and more. That is why we are going to detail the items you are most likely to need and why they will help you out.

No Community Day guide would be complete without a look at the CP potential in caught Pokémon. So, even post stat rework, we got all the 100% IV possible CPs of each Pokémon. Now keep in mind, besides the likes of level 30 and 35 weather boosted Pokemon, none of these are guaranteed 100% IVs, but if they are 100% then they have to be one of these.

What Pokémon should I focus on for the event? What are the meta relevant Pokémon to go for?

This is quite the loaded question, as mostly it is dependent on your own focus. In my personal case, I never got a shiny Pikachu, so this is my chance. For some, they want higher IV versions of their current Pokémon. For others, they might not have gotten a shiny they wanted or as many as they wanted. Then still there are those that just never got a opportunity to play during a Community Day due to work, life, and other obligations. Objectively speaking however, when you look at the meta relevance of each Pokémon and their exclusive moves, you can make a few conclusions:

While my original draft of the article had it as a resounding “idk, no one knows,” Niantic Support went to clarify this very question that had been on everyone’s mind, stating the shiny rates will be boosted throughout the entire event.

Hi Trainer, you will see increased shiny form Pokémon of the featured Pokémon across the entire weekend. The 3-hour window is just for the bonus rewards. Hope that helps! ^KM

For those that missed their shinies, this is your greatest chance to get whichever you want!

Can we use TMs?

No. There was some inconsistent wording in the initial announcements that could be open to interpretation, but it says clear, “Note: Fast TMs and Charged TMs will not grant exclusive moves during Community Day. To learn the exclusive move, you must catch or evolve the featured Pokémon during Community Day hours.” Unless something changes in this generic announcement of theirs, they most likely will not be able to be changed with TMs.

Given the amount of Pokemon featured in this event, it’s quite important to remember which of them are simply… better than the others. Let’s go over them and see how they stack up together. For a full version of this list please read this amazing breakdown written by Kratos: Pokemon GO December Community Day: Best Exclusive Moves to Look For

Metagross, Tyranitar and Venusaur are the best Pokemon you can evolve during December Community Day, as the moves they get are a straight up mega-buff to their performance:

Charizard and Dragonite reside as convenient upgrades, but nothing ground breaking. Draco Meteor is outclassed by Outrage, and Blast Burn Charizard is a great upgrade for Charizard, but there are stronger Fire types out there. These Pokemon are great to have and make up worthy team members, but they are not something which you can’t live without.

Pokemon like Typhlosion, Blastoise and Meganium have significant move pool upgrades with their CD exclusive moves, and while interesting, their stats make them quite unattractive compared to other Pokemon from S and A tiers. Eevee is particularly troublesome here, as Last Resort is not particularly useful on any Eeveelution. Evolve at your convenience.

Ampharos and Pikachu are nothing to write home about stat wise and their exclusive moves are more of a homage to the Pokemon lore than they are actually useful. Pikachu’s Surf attack can fill a weird niche against Rock types aiming to take it down, but Ampharos’ Dragon Pulse is not something you want on an Ampharos.