How to Achieve Greatness in the GO Battle League

Rising to the Top in Pokémon GO's Competitive PvP 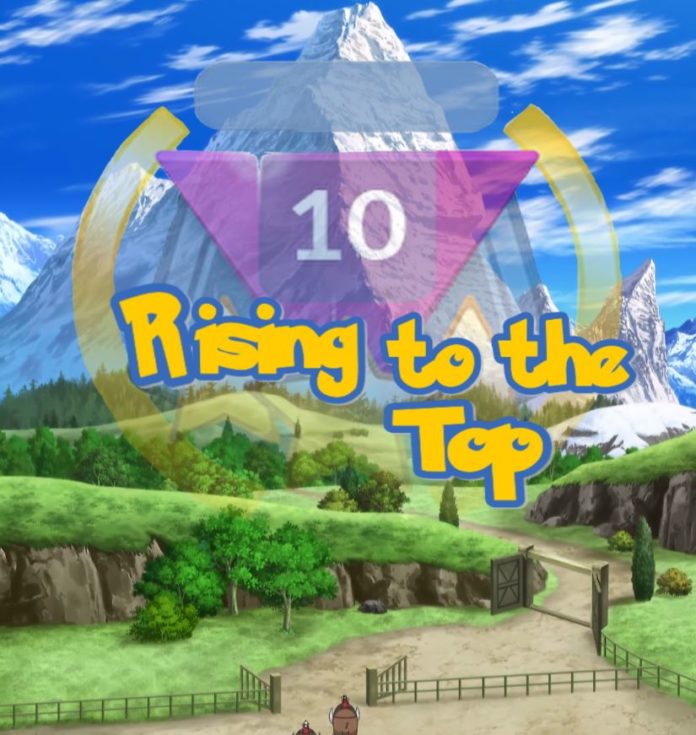 If you participate in GO Battle League, then you may be interested in achieving the ultimate goal of reaching Rank 10. To any trainer dedicated and talented enough to achieve this goal will unlock Pikachu Libre along with the famous “Steven pose”. We all desire success, and when it comes to the GO Battle league, having a clear understanding of game knowledge paired with the right strategies will aid you in climbing the ranks and ultimately being triumphant over your opponent. 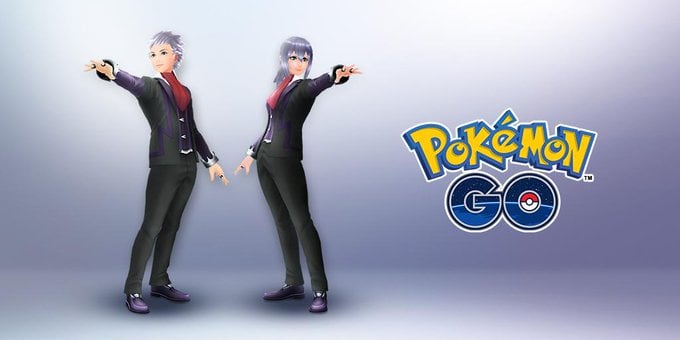 Today we will be diving headfirst into advanced tips and tricks that you might not be aware of to help with your overall gameplay experience and to skyrocket your rating.
Many of these tips will come down to practice and knowledge about the game, however with the right fundamentals, you can have the upper edge in battle.

Without further ado, let’s jump straight to our first advanced tip which involves…

One of the most important tips that can help you to have an advantage over your opponent is to learn and understand the use of counting fast moves. This process involves taking note of each time your opponents Pokémon uses a fast move in order to know exactly how much energy they have and which charge move they are going to use on you.

A lot of the time in higher-ranked gameplay, trainers are aware of this and will perform what’s known as a “bait” which is when you store up enough energy for a certain move but use the lower energy cost move in order to get a shield out of you and for them to have excess energy for another charge move.

Some fast moves such as Dragon Breath and Lock-on are sometimes hard to count due to the fact that they are being used at rapid succession. A good way to remember in your head how much energy they have stored is by going off your own moves. Knowing how many fast moves you do and judging their energy use off that can be a great indicator to prepare you for what’s to come.

Perfecting this tip takes time and the will to want to be able to understand game mechanics at an advanced level. Thankfully, there are helpful guides for this online which showcase exactly how many fast moves it takes for a Pokémon to reach its charge move such as this graph here made for the Ultra League by @7evennpls. 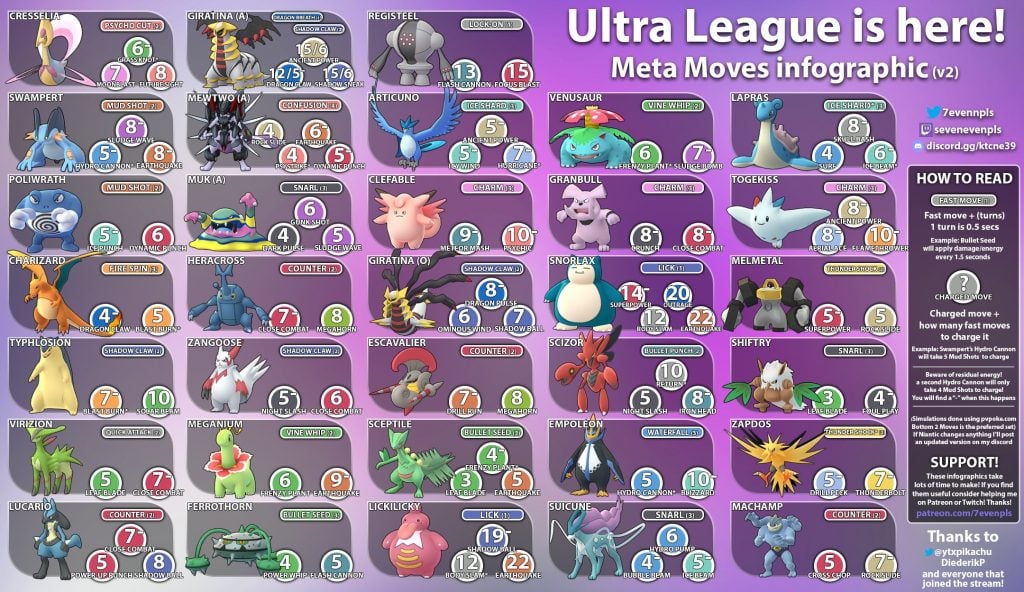 With this tip, I’ll be breaking it down into subcategories as there are more ways than one to use the switch button correctly.

A sac swap is when you switch into a Pokémon just as your opponent is about to use a charge move in order to sacrifice that Pokémon you swapped into. Mastering this tip can reward you by wasting your opponent’s energy, maintaining momentum and to gain shield priority. Perfectly timing a sac swap can make or break a game. This process requires precision timing, game knowledge, the ability to read your opponent and implementing our first tip effectively.

More commonly used at the start of a match when you have a bad lead matchup, a defensive switch is when you swap out to a Pokémon, more specifically a safe swap in order to keep your lead Pokémon healthy for later use.

Offensive switching can be a great way of farming down your opponent’s health with the use of fast moves in order to store up enough energy for what’s to come. This maneuver is most beneficial when you are in a winning matchup and your opponent switches to a Pokémon to attempt to counter you. Simply switching to a Pokémon to deal with their swap creates immense pressure and momentum to further dominate the game.

This trick involves not choosing a Pokémon instantly after fainting, instead, waiting to stall the 10 seconds given to choose. While in this waiting period, time will continue for your switch button to become readily available. This tactic is used in higher rank games to promote more switching during the battle and to gain an edge over your opponent.

The Art of Baiting

Baiting in PvP is an essential part of the game and promotes players to get inside their opponents head to create further opportunities in battle. Think of it as a bluff in Poker. “Bluffing is a bet or raise with an inferior hand that has little or no chance of improving”. This relates to Pokémon GO PvP by the use of what’s known as a shield bait.

The most common way to bait out a shield from your opponent is to farm enough energy with fast moves until you have enough to use a heavy-hitting charge move. Instead of pulling the trigger on the higher damage move, using the weaker/lower energy cost move.

This can force your opponent into thinking you are using a powerful charge move when in reality you have baited out a shield and still have excess energy stored to create supremacy and be in a dominating position to further excel the game in your favour.

Successfully pulling off a shield bait can be a defining factor in winning or losing a game. It is a high risk – high reward type of scenario. If a shield bait fails by your opponent not falling for your bluff, you will be in a disadvantage and can sometimes be tough to come back from. This requires the use of quickly soaking information and reading your opponent to determine if they fall under a safe or risky playstyle.

Referring to PvPoke.com and Other Helpful Resources

Websites such as PvPoke.com have a plethora of helpful tools to benefit trainers on a more advanced level. These tools can provide you with the knowledge needed to soar to greater heights in GO Battle League. These tools are as follows:

Team Builder: View your dream team and determine its strengths and weakness to make adjustments and form your own strategies.

Battle Simulations: Create a helpful simulation between 2 Pokémon to view how the battle will unfold. This provides precise information regarding how many fast/charge moves and shields were used in a matchup to determine which Pokémon will be victorious and to see exactly how long the battle took place.

Training Simulations: This is the perfect way to test out a new team composition without having the consequence of dropping in rank for GO Battle League. Battle real-time against a CPU opponent that mimics gameplay features to provide an unmatched hands-on experience.

Rankings: An incredibly detailed list of the top Pokémon in each league. Find out about a Pokémon’s key matchups, what its counters are, what beats it, its most popular and most beneficial moveset and its weakness’/resistances.

In almost every competitive online video game, there is a certain meta that players respect. The meaning of the metagame is always dependent on the community and the game’s creators. A new update could turn what was once a weak Pokémon for GO Battle League into an overpowered one with the introduction of a new move or rework.

Top-level Pokémon GO players agree with the saying “meta is meta“. This phrase refers to the fact that certain Pokémon simply out-perform others. There are many different reasons as to why a Pokémon will be considered a meta Pokémon over others, these examples include:

Sticking to meta Pokémon in GO Battle League will be one of the easiest ways to climb the ranks. The fact that these Pokémon will provide excellent coverage will teach a player the importance of utilizing Pokémon that can provide the most consistent wins. This also promotes a player to adjust to the ever-changing meta in Pokémon GO PvP.

Anti-meta, on the other hand, is the opposite of what we just discussed. What separates the good trainers from the best will be their ability to adapt quickly to the meta and pick up on patterns that other trainers use in their own gameplay. Supplementing and tweaking a team composition to counter meta Pokémon is a clever way to mix things up and to catch other battlers off-guard.

By using an anti-meta team, you set yourself up for a more dynamic gameplay experience with the benefit of taking down strong meta Pokémon. Adding in a “spice pick“, as PvP community loves to quote it, can be a risky maneuver without practice and matchup knowledge. Thankfully we have access to simulations and other helpful information to create a more unique gameplay and have interesting strategies to spice things up.

In the grand scheme of things, practice makes perfect. Like anything in life, with enough dedication, perseverance and having the right mindset, anything is possible. Consistency in GO Battle League will overall substantially make you a better player. You will pick up on tactics, learn from mistakes, and overall have a better grasp on Pokémon GO PvP.

Sticking with a strong team of 3 is crucial for climbing the ranked ladder. Although it may sound tedious, enduring the grind with a set team and understanding the ins and outs of your chosen 3, will benefit you immensely. You will learn how to deal with different situations and matchups, know exactly how much damage a move will do to a Pokémon, make better choices when it comes to switching and overall understanding the importance of being persistent in GO Battle League.

Greatness does not happen by chance. If you want to make it to the top, you will have to put in the time and effort to willingly want to climb the ranked ladder. Taking into account these tips and tricks will help with the grind, however, without a positive mindset and the dedication needed to make it to the top, the road to success will be long and treacherous.

Everyone has it in them to be successful at anything they put their minds too. Finding the strength to continue on when things get tough is crucial for not only achieving difficult goals but an excellent attitude for life in general.