Pokemon GO’s Trainer Battles charge moves have been fundamentally changed with the yesterday’s introduction of charge move mini games. In today’s guide, we’ll show you how to reach Excellent on all Charge Move types in Trainer Battles. We’ll be referencing Manaholix’s excellent video a lot, so be sure to watch it ahead of reading tips for every move typing:

Grass-type mini game works similar to the Bug type mini game – there’s a stream of circles going from the left side of your screen towards the right side. Just swipe in the middle and alternate up and down as the stream goes up and down.

Fire-type mini game is super simple, as it spawns circles on top of the fire blaze that goes from the bottom of your screen. To collect all of the circles you have to swipe around the middle, on top of the blaze, and it’s best to swipe in circles. 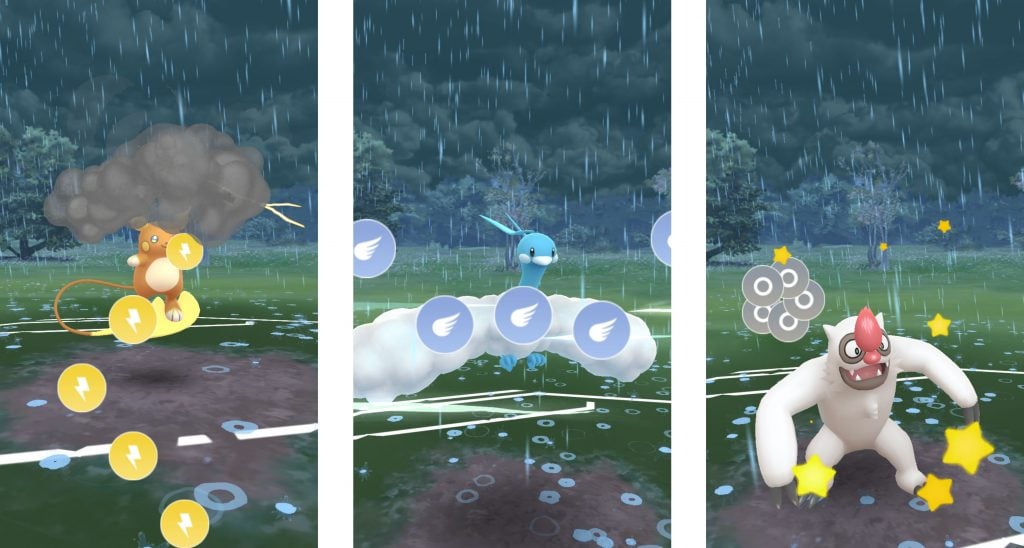 Electric-type circles appear in a zig zag fashion falling from a cloud above your Pokemon. Swipe left and right along the path to collect them – no need to panic, you will get all of them.

Flying-type move circles fly in from the right side of the screen, in a swooping pattern that first goes down and than flies up again. They are easy to collect by swiping at the point where the circles start to fly back up. Don’t swipe at the edge of the screen.

Normal-type charge move circles appear semi-randomly around the middle of the screen, but they can appear a bit further to the top or to the bottom. More circles appear by expanding in a radial pattern from the place where first circle appeared, so it’s suggested to collect them by swiping in a circular motion.

Ground-type move circles appear at the very bottom of the screen, full width. The easiest way to collect the circles is to frantically swipe left and right along the screen width. Collecting Ground circles is frantic, but it is also one of the easiest Charge move mini games in Trainer Battles.

Rock-type move circles appear from the top left portion of the screen, organised in columns of 4 circles. In order to select them, do not use a circle swipe, but rather swipe along the column to select all four. You have plenty of time, as the columns appear relatively far apart.

Ice-type moves spawn circles in rows, falling from a cloud that is placed above your Pokemon’s model. The mini game is similar to the Electric type mini game, but it is much easier, as you only need to swipe left and right at the middle (or a bit lower) of your screen. Be fast and you’ll get them all.

Dark-type moves appear around the middle of the screen, following a similar (but mach narrower) pattern as Psychic moves. Furiously draw circles on the middle of your screen to collect all of them.

Fighting-type circles appear around the middle of the screen, but unlike Normal, they do not spread from one point. Each circle appears randomly around the place where a fist icon has appeared. Circle motion works well as well. Most of the circles are organised around the middle, with a little vertical deviation. Be fast!

Bug-type move circles appear from the middle left side of the screen, relatively similar to Flying move mini game. We suggest just swiping in a circle on top of the “circle stream”, you should get all of them without failure.

Steel-type mini game is unlike anything else we’ve mentioned so far, as the circles appear in a X pattern on the middle of the screen. The first column appears as / shape and the next one appears as \ shape and it goes like that until you complete the mini game. Do not use circle swipe, use straight swipe to collect all of them, similar to the Rock type mini game.

Dragon-type moves appear from mid left and they travel to bottom right of you screen in groups of 5 circles, mimicking a star shape. In order to collect them, you need to swipe in a circular motion along their path.

Poison-type moves tend to “bubble” up from the “bottom center” area of the screen, but not quite at the bottom. The place where they start appearing is slightly under your Pokemon’s center. Swiping circles on top of your Pokemon does the trick.

Psychic-type moves spawn circles in… circles, similar to how the icon for the type looks like. They appear around the middle of the screen in a circular motion, spawning counter-clockwise, as if they are spiraling. And you have to spiral as well, drawing a swipe as if following an imaginary psychic-type-icon-path.

Fairy-type moves also appear in the middle of the screen, following a perfect circle, spawning on the radius of the circle. In order to collect them all, swipe furiously along the circle path in a circular motion.