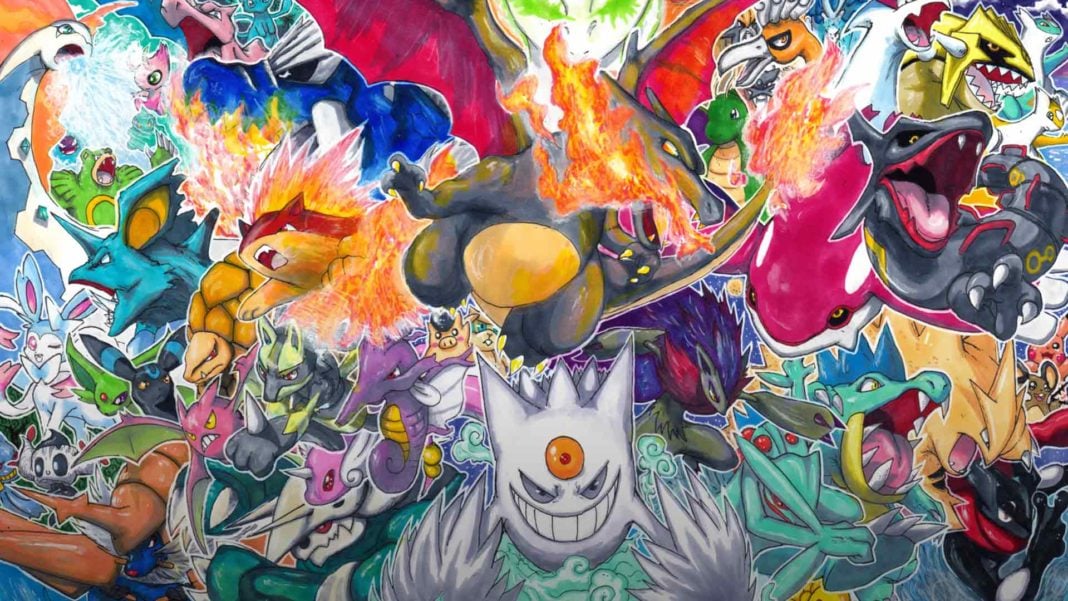 Trainers, We all know that the Crown Jewel of any new Pokémon Go Event is the latest Shiny Pokémon family that’s released – No matter how useless (Zigzagoon, I’m looking at you) the prospect of finding a Shiny Pokémon is something that no doubt keeps people coming back to the game time after time. Nothing beats clicking on a Pokemon and seeing it appear as a different color to normal. The Gasp, the panic to throw a Golden Razz Berry at it and use an Ultra ball. Seeing the ball shake for the third time followed by a sign of relief before checking its |IV’s. Its all part of the excitement of finding there Alternate colored Pokémon.

I hear all the time from players that “New shinies aren’t new content” and whilst I do agree with this statement, it doesn’t stop me chasing that shiny Koffing or Ekans, safe in the knowledge that bigger and better features are being developed. Now that’s out of the way, let’s look at my aim for this article.

A Look at Shiny Odds as a Whole

The below Infographic by our very own Orange Heart shows the various different methods for obtaining shiny Pokémon and the odds of doing so. Each method has slightly different odds but the basis remains the same: Some methods give you a better chance than others. 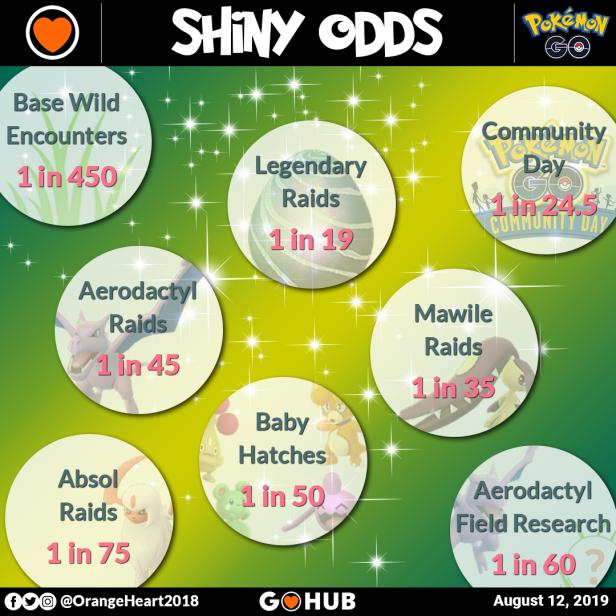 This is a figure out of 10 that I will be rating each method to show at a glance, the rarity of the shiny form that can come from this method.

In this article series, I’d like to give a comprehensive breakdown of all of the methods within Pokémon GO to efficiently shiny hunt followed by some stats and figures to give you a peek into which method should be the best for finding shiny Pokémon.

I will be quoting figures from The Silph Roads many in-depth studies on shiny rates over the last few years and including links to the research where appropriate.

Below you will find my table of contents for this article and because the list of methods is so vast, what I plan to cover in Part 2.

So, with that out of the way, let’s get into the first topic: Bog-standard Wild encounters.

Wild Pokémon. They’re everywhere. Some of them have shinies available in the wild, others don’t (for now). Casuals and Hardcore players alike utilize a technique called “Shiny Checking” to sift through them. This is basically clicking onto a Pokémon that has a shiny form available and if its not shiny, running from it. This can get tedious very quickly however as you’re not rewarded for your efforts if something isn’t shiny (as is usually the case with shiny hunting in any Pokémon game) however, you could if you prefer, catch the Pokémon anyway to allow you to build up Stardust and candy (this also gives you a shot at getting a decent IV Pokémon or a 100% too). This is only really recommended if you have balls to spare and can replenish them easily enough though.

Wild shiny Pokémon can be split into two categories. those with a standard rate of 1 in 450 (see research here) and those with a “Boosted” rate (here). The boosted rate TSR believes to be in the region of around 1 in 50. Because of the various in-depth studies that have been undertaken, it’s possible for us to ascertain two things:

We’re all aware that Niantic likes to release shiny Pokémon to keep us playing, and like to release said shinies during events with boosted spawns to give us a higher chance of obtaining one of the shinies within the event window. Since the start of 2019, events have seen a subtle change which instead of featuring 1 or 2 new shiny Pokémon families with standard odds, will feature 3 or 4 new families, boost spawns of these alongside other Pokémon whose shinies have already been released and also feature a Pokémon with a boosted rate (such as Scyther, Onix and Sneasel.)

2. Wild shinies fit into one of the two above categories.

As explained above, the majority of Pokémon with shiny forms released will now* fit into one of the two categories. In short, this means that you will either have a 1 in 450 of clicking on an Alolan Rattata and it being red or a 1 in 50 chance of clicking a Sneasel and it being neon pink. Some Pokémon are outliers to this rule however, such as Kanto Diglett or Plusle and Minun. These pocket monsters had a globally boosted rate for shinies during Safari zone events in 2018 and now have a standard rate. More on those later though.

With all this taken into consideration, shiny hunting wild Pokémon can feel like a thankless task but it is the bread and butter of how to obtain those alternate colored Pokémon you need.

Straight forward. Is there an event on? if the answer is yes you’ll likely be seeing many of the same Pokémon in the wild despite the weather or time of day. Take the recent Team Go Rocket Takeover event for example, Ekans and Koffing released as shinies, plenty of those Pokémon around in the wild and plenty to shiny check.

If the answer is no, then ignore the above. typically, you have the highest chance of finding a recently released shiny during the seven days of the event. Boosted amounts of spawns mean more mon to click on, more mon to click on means more chances of getting that shiny.

Of course, you need to first understand that Random is Random and there is no real logic to it. I also must stress that you will come across players that play for what seems like literally 5 minutes during an event and get every available shiny, and similarly, you will find people that play 4-5 hours or more a day and still don’t have even one after a week of clicking thousands of them. This is just how random spawns work I’m afraid. of course, the more things you click, the more opportunity you give yourself of finding something you want but it does not guarantee you will.

By the title, I’m referring to the Safari Zone events of 2018. Whereby one particular Pokémon spawned in the wild with a boosted shiny rate (somewhere in the region of around between 1 in 25 and 1 in 75) and has since returned to standard odds. If you were playing back then, the chances are you have one or more of these shiny Pokémon.

Due to the high shiny rate and length of time they were available (typically 2-3 days) it means most players have these shinies with some to spare for those that didn’t get them (I still have Gary’s blue-nosed Diglet, if you’re reading this Gary, we’re lucky friends, lets trade!) In either case, they’re still readily available.

Good old field research. We all know someone who has opened a Field Research encounter and managed to snag a shiny. Whether you have completed 10 tasks or 10,000 tasks, if the Pokémon that appears as a rewards encounter has its shiny available, typically* you have the same odds as a wild shiny Pokémon (1 in 450) to encounter its alternate form.

There were some exceptions to this rule however. We have seen Pokémon such as Spinda, Aerodactyl, Absol and even Feebas / Lotad become rewards for special tasks with reduced shiny rates on various occasions. These are outliers to the rule.

A Yearly real-life event in which those who purchase tickets and attend are rewarded with a boosted shiny rate for the duration of their day inside the park they attend.

I was lucky enough to attend Go Fest in Dortmund 2019. Out of a group of six players from my town, I caught the most shiny Pokémon (30 in 10 hours). Most of which I’m glad to report I really needed and found the selection able to be obtained was both vast and varied. So much so that I plan to attend next years event in the US, Germany and I’m also hoping that Niantic bring an event to my neck of the woods aka: The UK.

The Pokémon whose shinies were available throughout my experience were ones that were generally only available readily throughout events such as Gastly, Machop or Kanto Geodude: Pokémon that if you didn’t catch a shiny of during their respective events, your odds of finding went down because they are not common spawns.

Overall the price paid to attend the event I feel was worth every penny and I would encourage more players to attend in 2020. For shiny hunters with available funds, this is an absolute must.

Nests. They change semi-regularly every Fortnight (and have been known to shift again with the launch of events and the like) and you might be lucky enough to have one near you. These can be spotted pretty easily by having multiples of the same Pokémon appear in one area. This usually occurs in places such as parks or areas of recreation.

I find the most efficient way to shiny hunt at Nests is to pay attention to our friends over at The Silph Roads Nest Atlas And once you notice a nearby nest has a species you’re particularly keen to find the shiny form of, go and hunt it when you get a chance.

Knowing that some shiny Pokemon have “Boosted” odds (such as Scyther, Onix and Sneasel) I usually only wait until a large nest has a nest of one of these Pokémon before bothering to hunt there.

To summarize, there are many ways in which to hunt shiny Pokémon. Some of which i have covered and others I have saved for Part 2.

Of the previously mentioned ways to obtain shiny Pokémon, my favourite so far has to be attending Go Fest. I realize that its not practical or possible for everyone to attend the events and yes, it even caused upset for people that wanted to go that weren’t chosen to obtain tickets. All that aside, I honestly don’t think you can beat walking around a stunning park with good company, in great weather, surrounded by people that share your interests and with odds that are lower than community but higher than most events.

Come back for Part 2 where I will be covering hatching eggs and raids amongst other methods.