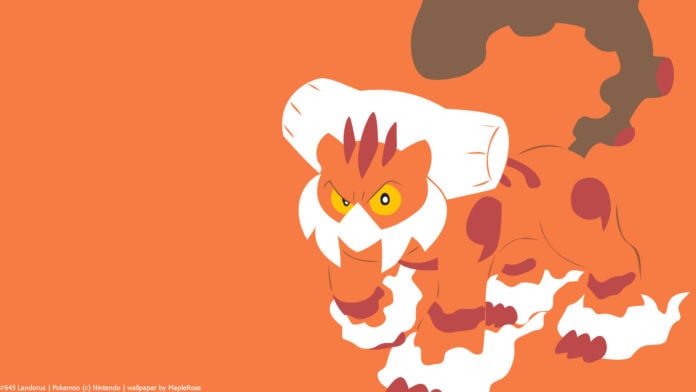 It brings us the Therian formes of the famed Genie Trio of the Unova region. But while the Incarnate formes we got last year weren’t exactly meta defining, to say the least, this time around, we get something that literally shakes the meta to its core!

Among the Therian formes, the most fearsome is unsurprisingly the leader of the trio: Landorus. This beast is not just any powerful legendary, it is one of the best to ever come up in the game.

With stalwarts like Groudon, Garchomp and Excadrill already dominating the Ground type meta, Landorus Therian is going to be possibly the king among them. However, it is worth noting that Landorus Therian is king when you don’t consider mega evolution or Primal formes (more on that later). Also, like the other Therian formes, Lando-T also faced the ‘ moveset hammer of Niantic’ and got a nerfed set of moves.

So will Landorus Therian still prevail? Do the new make Landorus-T a force to be reckoned with?

Let’s find out by soaring into the skies and return back to the ground with an affirmative analysis on this terrifying Pokémon.

It has a dual typing of Ground and Flying and as such, is weak to the Ice and the Water types, with the Ice type weakness being quadruple.

Its resistances include Ground Bug Electric Fighting and Poison types.

Landorus Therian has the following stats in Pokémon Go:

Landorus’ ATK stat is sky high, even higher than the Continent Pokémon, Groudon. That said, it is less bulky than Groudon and even Garchomp, for that matter

This clearly demonstrates that Landorus Therian is a straight out offensive monster with decent bulk to back it up.

So does Landorus-T have the moves in its arsenal to reinforce that phenomenal ATK stat? Let’s find out!

Mud Shot is an absolute blessing to any Pokémon and to a Ground type, it is the icing on the cake. Mud Shot charges up charged moves super fast and poses a massive threat to the meta at all times.

Stone Edge lacks STAB but is very usable on Landorus due to its high ATK stat. An excellent coverage move for those pesky Flying types.

Earthquake is its most powerful move. While swapping Earth Power for Earthquake is undoubtedly a nerf, it still does what Groudon and Garchomp do, maybe better. This is Lando-T’s strongest move and it nukes.

Bulldoze is a disappointing Ground type move. What a bummer!

Superpower is Lando-T’s cheapest move and is a hard-hitting one at that, totally annihilating Ice types. However, the ATK and DEF debuff has to be kept in mind and used accordingly. But only 40 energy and Mud Shot is mouth-watering, to say the least!

So what is Landorus Therian’s ideal moveset?

The ideal moveset for Landorus-T is Mud Shot paired with Superpower and Stone Edge.

It adds some spice as it is just too good to resists. But again, do keep the debuff in mind.

But if you want to be a man/woman of culture, you can stick to Mud Shot paired with Earthwuake and Stone Edge.

But which moveset is the winner in Master League? Let’s find out!

Landorus Therian sports extremely high DPS and makes it an excellent Pokémon to use against Pokémon weak to the Ground type. So in PvE, the Ground type moveset is the way to go!

Landorus Therian’s high stats make it a staple in the Master League.

It has the ability to hard counter both Togekiss and Dragonite, without a weakness to either. In other words, it is a glassier version of Garchomp without the weakness to Dragon and Fairy. On that note, it is worth noting that Landorus-T can even beat Garchomp and Groudon.

But it also had a weakness to Water and as such, is totally walled by Kyogre and Swampert. Mamoswine would melt down Landorus before it can even scream.

All things said and done, Landorus-T is a wonderful Pokémon to fit into your Master League squad. Powering it up and adding a second charged move is pretty expensive but definitely worth it.

How future proof is Landorus Therian? The Looming Threats of Mega Garchomp and Primal Groudon

Landorus Therian is undoubtedly the king of the current Ground type meta even after the ‘nerfed ,oves’. But in due course of time, we will have two devastating monsters that will outclass it gradually…

Mega Garchomp and Primal Groudon will surpass Landorus-T in every parameter but Landorus-T will still remain the most viable Ground type.

Mega evolutions last for only 8 hours at a time and we should presume the same for the Primal formes for the moment.

Therefore, Landorus Therian is the most bankable and usable Ground Pokémon in the meta. Period.

Landorus Therian is the most meta relevant raid boss since Reshiram and Zekrom and is an extremely powerful addition to the meta.

Niantic did tone it down with a not-so-ideal moveset but Lando-T’s incredible ATK stat and Mud Shot seal the deal, making it retain its crown of the Ground types.

The Season of Legends couldn’t have got a better Pokémon and you should be downright excited about having Landorus-T in your arsenal.

This Pokémon was the most fearsome addition to the competitive scene through the Crown Tundra and it replicates its Intimidate-ing presence (see what I did there?!) even in Pokémon Go!

Your wish for a supreme Ground type attacker has been granted by the leader of the Genie Trio!