Trainers, I know many of you use Discord. More specifically Bots on Discord to keep track of certain things such as raid timers, bosses, PokéStop tasks and more recently: Team Go Rocket Takeovers. Today I bring you news of OmaBot that has been created by ReadOnlyChild and Logan S. to keep track of some more player specific vitals such as Pokémon GO badge progress and allows you to compare yours with others!

You can find yourself an invite link to their discord support server here. 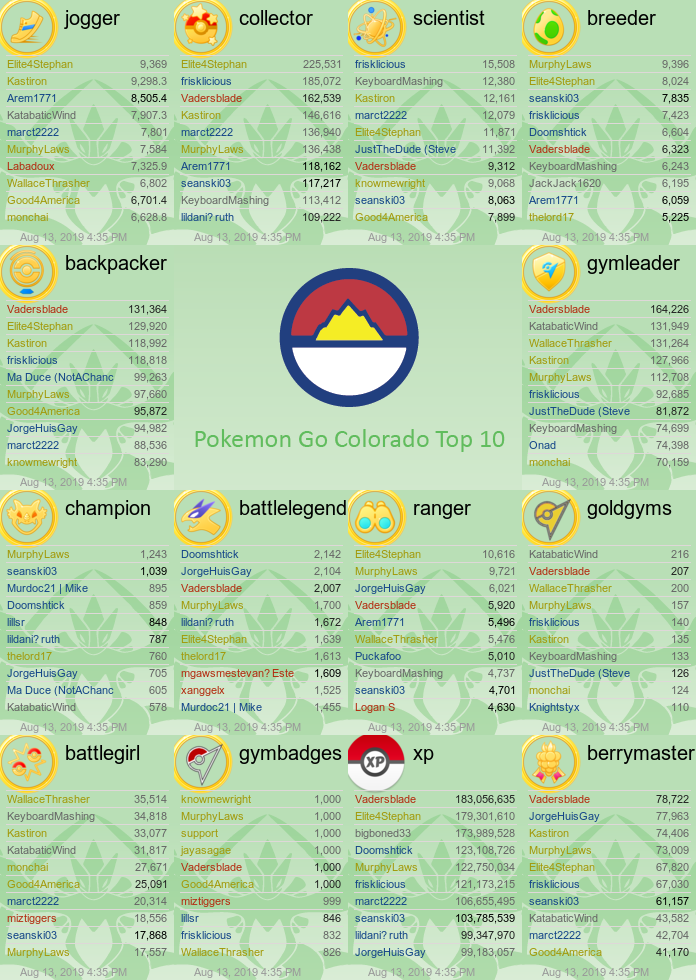 Today, we have interviews with two of the creators of OmaBot: ReadOnlyChild & Logan S. For the interview I will refer to myself as SHL and them as ROC & LS

SHL: Please can you tell me a bit about yourselves:

ROC: I finished college some years ago. I am a seasoned Software Engineer. My intro to Pokémon was when Generation I came out (circa 1996?), and I played one of the Gameboy games, probably the first one. Over the years, Pokémon was releasing all these gens, and I always thought it was just the same characters making their way into pop culture again and again. Pokémon GO introduced me to Discord; the tool people were using to coordinate getting to raids. Discord holds a lot of great communities, and the one I was a part of was doing a monthly tracking of player stats by means of an online survey where you could enter your stats and then a ranking would be assembled by someone and published for the community to see. If you had participated with your stats for a number of months, you could also rank into monthly progress listings! I looked around on other discord servers to see how others were doing similar things.

LS: I am a college student who is studying biology and mathematics living in Denver, Colorado. My goal is to eventually work with American Pikas in the Rocky Mountains as a conservation biologist. I started playing Pokémon GO because I wanted to play something that made me go outside, and have since become invested to the point where I am double level 40, and have almost the entirety of the pokédex lucky. My favorite Pokémon is swinub, and I am most proud of my traded shundo Moltres in Pokémon Go. I moderate for the Pokémon GO Colorado, Capitol Hill, and the City Park discord servers, and I help out primarily with graphic design features for OmaBot!

SHL: Great stuff, now though, can you please describe in your own words what OmaBot does exactly?

LS: OmaBot is a record source for a trainer’s journey in Pokémon GO. It allows a trainer to store every single aspect about their gameplay, from their badges to the many types of pokédexs, and enable any member of their community to see and compare effortlessly.

ROC: The bot will track a player’s stats for the different in-game badges such as jogger and breeder, including your XP. Your entries are kept with the time of entry so a trend chart can be created to show progress. You can ask the bot to show your profile, and it will render it as an image resembling a TGC card. The bot knows about the in-game medal tiers like bronze/silver/gold, and it also adds platinum and diamond tiers. It also has features to track some made up dexes called hundo, lucky, and shiny, amongst others like Unowns and Spindas.

SHL: Next Question: For those who don’t use or aren’t that familiar with Discord, why does it help players?

ROC: Discord is a great tool for keeping connected with other users/players. It can be compared to other chat platforms like WhatsApp, with the big difference of encouraging developers to create supporting tools for their communities, like the case of the oma bot.

LS: Oma is extremely helpful to trainers in several ways. The primary way is that it enables community leaders to create clean and easy rankings for their communities. Prior to discovering Oma, I would spend hours on a Google Spreadsheet trying to create a simplistic ranking of less than 20 members. Now, I can rank hundreds of players effortlessly. Oma can help facilitate competitions during events, show off some incredible catches, and inspire trainers to reach the next milestone by giving them more attainable goals beyond just reaching level 40.

SHL: Tell me something you’d like to see added to the game that’s not already there?

ROC: I think Niantic is doing a good job at introducing features to keep the game fresh. The community is also doing a great job, and resources like GoHub also help every day. An example I can relate to, I am not good at telling what pokémon types to use to get the best result in a battle, but I know a few clicks on any of numerous online resources will get me the information I need.
LS: I would definitely enjoy seeing the addition of Effort Values (EVs) to Pokémon GO. Now that we have the ability to increase IVs through purification, I think it would be easy enough to incorporate this into the game, and give us a new reason to play and interact with some of our older Pokémon, rather than try to replace them with better ones.

ROC: The bot tracks things that already exist in-game, and will add support for new additions to PoGO, like the recent hero and purified ones which have already been added.

LS: I could see the hundo Pokédex being a less valued part of a players statistics if any pokémon could eventually become perfect, but I think the core features of Oma would remain useful to the community. I doubt Niantic will ever create a specific leaderboard based on area or players in the vicinity.

SHL: Any useful tips for trainers out there working on their stats?

ROC: Everyone has their own pace at which they play, the game is enjoyable at any level and friends and community make it possible to capture Pokémon that for a lonely player would practically be impossible to catch. My advice to lonely trainers would be to reach out to other pokémon trainers and for communities to be inclusive of everyone.

LS: Find yourself a friend to focus a couple of aspects on together! I definitely wouldn’t have a lucky Pokédex worth anything without my friend corlampsxc to play with all the time. It really makes a huge difference.

LS: That is an excellent question, and one that I don’t have the answer too!

ROC: My Pokémon background only knows Generation I monsters, some more popular pokes are already representing other discord bots. For no particular reason I can think of, I like Kabuto and Omanyte.

Thanks again to ReadOnlyChild and Logan S for your answers. I hope that OmaBot gets the recognition it deserves as it continues to evolve.

We at the Hub think that OmaBot is a great way to keep track of certain medals and compare your stats with others. Go check it out and get your local Discord to implement it today! Link.