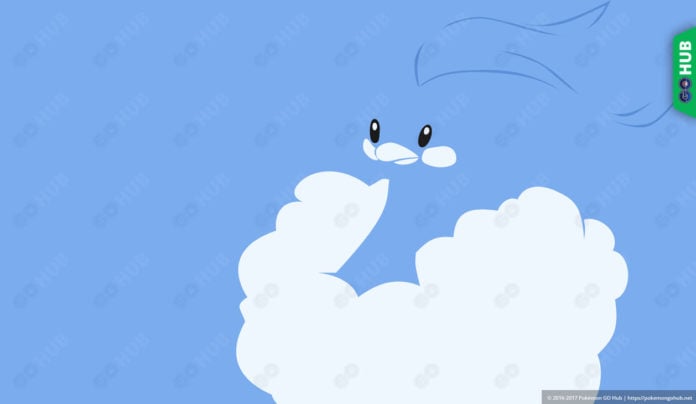 In the midst of the Gible Community Day hype, we have all probably put the Swablu Community Day in the backseat. Not that anyone is getting blamed here as Gible is quite possibly the biggest Community Day star yet! We have waited for eons to get a jaw-dropping event and Gible it is!

But before we get to June 6th or event the exclusive move for Garchomp, Altaria is all set to receive Moonblast on May 15th.

We all expected Earthquake, Dragon Claw and even a new move like Feather Dance! But alas… Niantic threw a curveball at us by giving Altaria Moonblast.

But is it really that bad? Yes, Earthquake or Dragon Claw would have promoted Altaria to the stratosphere and make its fluffiness all the more terrifying, but what is Altaria capable of with Moonblast?

Better yet, what is Mega Altaria going to do with its STAB Fairy type charged move?

While I will certainly cover Garchomp and Mega Garchomp’s exclusive Community Day move once the official announcement is made, it is only fair that I give some love to this dragon bird.

So with that being said, let us check out some Altaria and Mega Altaria fundamentals and shine a light on Moonblast’s viability. Plus, we will also see if Mega Altaria fits into the meta.

Altaria has a dual typing of Dragon and Flying and as such, is weak to the Ice, Dragon, Fairy and Rock types, with the Ice type weakness being quadruple.

Altaria resists all the starter types and the powerful Fighting type, making it an absolute boon in the typing department.

Altaria has the following stats in Pokémon GO:

Altaria’s stats make it a natural run-of-the-mill Pokémon for the lower leagues of PvP. With a low ATK stat and impressive bulk, it fits in like a glove.

It is bulkier than its Dragon Flying crewmate, Dragonite, and essentially is considered a bigger threat in the Great League format. In fact, Altaria has always been the #1 Dragon in Great League.

With the Candy XL mania in full swing, Altaria ventures into the skies of the Ultra League and gives stiff competition to the meta out there.

Almost all of us have a Rank 1 Altaria servicing us amazingly well in the GL format. More than the stats, Altaria’s bragging rights can be attributed to its moveset to which Moonblast gets added.

Altaria can learn the following moves in Pokémon Go:

Altaria needs a modest 10,000 stardust and 25 candies to unlock a second charged move. But do we? Do we really? I mean, we can and we probably do. But no one gives a flying bird about Altaria’s Dazzling Gleam. And definitely not the cringe Dragon Pulse.

Dragon Breath and Sky Attack have been the trademark moveset of Altaria for everyone. We never had any reasonable argument for actually employing another charged move for Altaria. Sure, it has its uses but we really don’t care.

This is where Moonblast gets bright.

Moonblast, ladies and gentlemen, is a valid second charged move for Altaria.

What did you say? “BUT IT ALREADY HAS DAZZLING GLEAM!!”

Yeah, sure. But Moonblast is better. How? Let me explain.

For now, I’m strictly going to talk about PvP and come to the PvE blah blah later. So *cracks knuckles*…

While both deal the same damage (DMG), Moonblast costs 10 less energy and also has a chance to debuff the opponent’s ATK stat!

Dragon Pulse gains STAB? But what if I told you Moonblast is still better?

In a mirror match-up between a Dragon Pulse and a Moonblast Altaria, you can clearly see that Moonblast, despite lacking STAB on Altaria, deals more damage!

Add the fact that Moonblast has a chance to debuff the opponent’s ATK stat.

But how better? Let’s find out!

Altaria and the Great League have been synonymous with each other since the beginning of PvP. With Dragon Breath being a blessing to virtually anything that gets it and Sky Attack being Altaria’s MO courtesy of it being a heavy hitter at a relatively low energy cost.

Considering a 1 shield scenario, with Dragon Breath paired with Sky Attack and Dazzling Gleam, Altaria gets a 77% win rate against the meta:

With Dragon Breath paired with Sky Attack and Moonblast:

So statistically, Moonblast hardly matters. But situationally, Moonblast with its viability as the best second charged move, the chance to debuff and be more energy-efficient in dealing with the likes of Umbreon and Obstagoon. For Pokémon like Shiftry and Fighting types, Sky Attack is and always will be the way to go.

As mentioned previously, the advent of Candy XL has boosted the viability of Altaria in the Ultra League meta. Its greatest feather in the UL cap (pun intended) is its ability to check XL Umbreon, a dangerous tank running rampant in this format.

Under the 1 shield scenario with Dragon Breath paired with Sky Attack and Dazzling Gleam, Altaria has a 62.6% win rate against the meta:

With Dragon Breath paired with Sky Attack and Moonblast, Altaria has a 65.8% win rate:

Again, not a massive improvement. Sky Attack is still your bread and butter.

But how does Great League’s best Dragon fare in the Ultra League?

Oh, how the mighty fall! Even with an upgraded second charged move, XL Altaria barely does anything impressive as a Dragon type.

Hot tip!!! If you are up for a wonderful Silph Road outlook on Altaris’s battle mechanics and match-ups in PvP, then check out JRESeawolf’s ‘Under The Lights: Community Day Altaria (A PvP Analysis)’ for a budding collaboration between Go Hub and The Silph Road (name a better crossover, amigos!).

Not a vast improvement. While the lower energy cost and the chance to debuff certainly give Altaria a valid second charged move, there are just a few reasons to use Moonblast over Sky Attack.

Moonblast can serve you only against Umbreon variants and the situations where Flying is resisted.

Otherwise, your Altaria won’t become too much of a big deal with Moonblast. Sigh, if only it had got Earthquake!

Altaria’s underwhelming stats give it nowhere to perch on the PvE meta. In a crowd full of legendary and pseudo legendary dragons, Altaria can only substitute as the thanksgiving dinner for the other Dragon types. Dragon Breath and Dragon Pulse are bad for PvE. So sadly, Altaria can’t even find a niche in raids.

But could Mega Altaria find a place in the PvE meta? Or at least a niche?

As it stands, Mega Altaria is the only Dragon Fairy type and it joins Dialga as the only other Dragon type till Gen 6 that isn’t weak to the Dragon type.

So is Mega Altaria is a good Pokémon to use in raid battles against Dragon types?

Well, yes and no. Let me explain.

Mega Altaria’s 222 ATK stat doesn’t help its cause as a high DPS dealing Dragon or Fairy type. Dragon Breath is not ideal for PvE, Dragon Pulse sucks as a Dragon type attack and oh… guess which Fairy charged move is better for Mega Altaria in raids?

Dragon Pulse in PvE is a 2-bar charged move with 90 base power. So even Dragon Pulse is better than Moonblast in PvE!

So Moonblast is a worse charged move for Mega Altaria in PvE. As such, its usage as a raid attacker is bad in terms of DPS.

But Mega Altaria still has a trick up its sleeve…

And that’s its impressive bulk. But how exactly would its bulk help in raids?

The answer: It will last longer and offer mega boosts to both Dragon and Fairy type attacks!

With Mega Altaria on the battlefield against a Dragon type raid boss, your Dragon and Fairy type counters would be able to deal massive mega-boosted damage for a long period of time, thereby making raids quicker. Now that’s certainly something!

Here’s the summary of Moonblast Altaria and Mega Altaria:

Mega Altaria and the gorgeous golden shiny are the only factors to look forward to in Swablu Community Day. Therefore, it should be a relaxed event where you can catch a new mega, use it as a power-boosting strategy for Dragon raid bosses and add pretty shinies. The XL grind or an Elite Charged TM isn’t worth it.

The real grind is coming on June 6th for the dominant land shark pseudo legendary dragon with one of the deadliest Megas in the game!