PvP is here in Pokemon GO! It is an absolute blast to battle other fellow trainers. The introduction of a second charge attack changes the entire meta for PvP battles, and especially the aspect of type coverage.

I’m guessing we all know already how important type coverage is, but now it is more important than ever! There are some sleeper Pokemon out there that finally have a chance to shine with their diverse typing and move variety. So, in favor of initial exploration of different type coverage aspects, lets revisit a few of these “sleeper” Pokemon and see why they have a chance to shine.

As a refresher, here is the chart that covers all types for effectiveness (courtesy of pokemondb.net)! 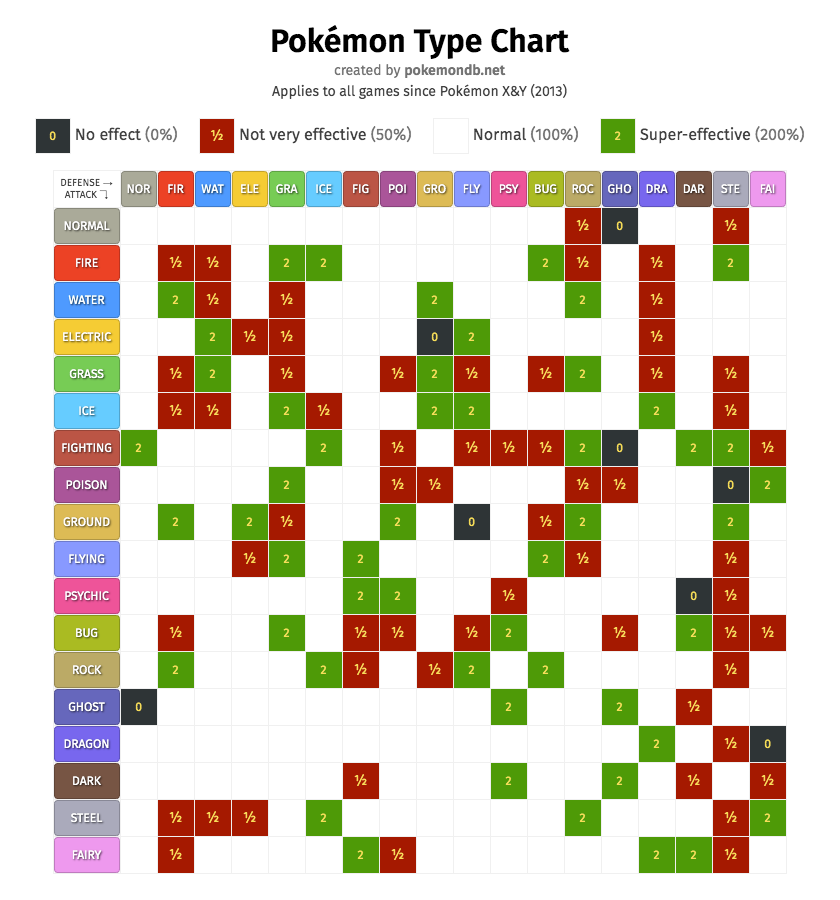 There are several Pokemon that were blessed with type coverage moves that will potentially allow them to shine in PvP. These Pokemon will be a great examples of the importance of type coverage.

For the time being, I won’t cover them all, but rather just the extremes to showcase how Type coverage works and how we should think about it. Feel free to do some of your own research on the GO Hub database to see which Pokemon will have success for any given League.

So I’m going to list 2 Pokemon with excellent type coverage for each League, starting with Great, Ultra and then Master. As for choosing which ones to go with, I simply went by each Pokemon’s perfect CP stat that fell within the League’s limits.

These are by no means the “best” Pokemon to go with – these are simply strong type coverage Pokemon. Keep that in mind. Further details will be discussed under each Pokemon. Let’s do this!

Bayleef – The stats for Bayleef Grass are pretty solid for the Great League. With a 122 ATK, 155 DEF and a 155 HP is not bad at all! It’s type coverage, however, is INSANE! Looking at the chart, Bayleef is weak to Fire,Ice,Poison,Flying and Bug. BUT, Ancient Power is super effective against Fire,Rock,Bug and Flying. That’s a total of 4 types that deal super effective damage to Bayleef. Excellent type coverage for a surprise advantage! As far as choosing a quick move, it’s entirely up to the trainer. Razor Leaf will cover Water types and Tackle does neutral damage to every type except Ghost, Rock and Steel.

Delcatty – Coming in with an ATK of 132, DEF of 127 and HP of 172, Delcatty Normal is an interesting choice! The number one thing that makes Delcatty unique is it’s typing. Being a Normal type, it is only weak to Fighting. With that in mind, countering it is super easy using Play Rough Fairy. It is a powerful move and take care of the only type coverage it needs. Wild charge is a decent move which is why I think it deserves to be the 2nd charge move of choice. Having Zen Headbutt as a quick move also covers the Fighting type weakness as well. Just a little teaser here, but Normal types will finally have a role in Pokemon GO.

Politoed –This Pokemon finally gets a chance to shine! Coupled with good stats for Ultra League (174 ATK, 179 DEF and 207 HP) and a good move pool, Politoed Water is a type coverage nightmare. Mud Shot already takes care of exploiting its Electric weakness. Then, Blizzard takes it to a whole new level. Not only does Blizzard cover Grass types, but it also takes care of Dragon types as an added bonus. Really excited to test this Pokemon out!

Forretress – Due to its typing, Forretress BugSteel is ONLY weak to Fire by 196%. Sure, that does seem scary at first. But can it counter that issue? Of course! Which is why I chose Earthquake to be the FIRST charge move option over the Heavy Slam STAB move. Not only that, Forretress has some solid stats too (161 ATK, 205 DEF and 181 HP). An interesting Pokemon isn’t it?

Torterra – I’ll be honest, this one came as a complete surprise! As a Pokemon, Torterra GrassGround is extremely well rounded statistically. Coming in with a 202 ATK, 188 DEF and an HP of 216, it’s built like a tank! Where it shines though is within it’s type coverage. Torterra is weak to the following types: Bug, Fire, Flying and Ice. Crazy thing is, Stone Edge covers ALL of these weaknesses! Completely blew me away and an excellent example of how important type coverage is.

Groudon – Already an extremely powerful Pokemon (270 ATK, 228 DEF and 205 HP), Groudon Ground has the charge moves to cover all its weaknesses! Any Grass or Ice types can be dealt with using Fire Blast and any Water types can feel the wrath of Solar Beam. Groudon is a highly usable Pokemon. Be sure to test it out a few times when PvP drops!

The most important aspect of PvP will be type coverage. Now that Niantic has boosted super effective damage from 40% to a whopping 60%, this will make all the difference between winning and losing. If you’re able to deal super effective damage x2 (Fighting against Tyranitar for example), then you are dealing 156% more damage! That is insane! Yet, of course dealing STAB and super effective damage would be the best scenario. That actually happening, however, is going to be a more rare scenario than you might think. So, definitely focus on super effective damage the most using type coverage tactics. The Pokemon listed above may not be the “best” choices, but they are solid options nonetheless. I think they truly showcase the sheer importance of type coverage. If you’d like to see me talk more about type coverage, you can click here. A lot of Pokemon we as trainers would never of thought to use will finally get a chance to shine!

Disclaimer: It IS possible your opponent could have a Pokemon that deals super effective damage against you that is of different typing.

For example: Lugia FlyingPsychic using Hydro Pump Water against your Groudon Ground. Solar Beam Grass won’t cover your weakness against Lugia. In fact, it would be a bad move overall in this scenario. Just another thing to add to the list of randomness that can happen in PvP. You never know what your opponent will throw at you. So always keep that in mind!