Smack Down, a Rock type fast move recently added to the move dictionary, has been leaked in the Japanese and Chinese in-game announcements to be the exclusive move that Tyranitar will be able to learn if evolved during the next Community Day. Smack Down is a carbon copy of another Rock type fast move, Rock Throw (same damage, energy gain, cooldown, …), or at least that’s how it is defined in the GAME_MASTER file as of now.

We already did a general analysis of the move itself (assuming the same move characteristics of Rock Throw) when the move was not yet introduced in order to see which Pokémon could be able to learn it and how this fact could shake things up in the current metagame. Now, it’s time to study the Tyranitar scenario a bit more in-depth ;).

Disclaimer: Niantic did change Smack Down’s move characteristics in the GAME_MASTER file the day before Community Day. This time, the nerf wasn’t as bad as with Charizard’s Blast Burn, as they kept the same DPS but slightly reduced its EPS, which translates into less energy gained per second and thus more time to get enough energy to fire off the charge move. Wondering what the new move characteristics are? Or if that theoretical Ho-Oh duo might still be possible? Check out this article, in which the new version of Smack Down is analysed!

Rock types have always been great additions to your offensive lineup, mostly because they counter plenty of raid bosses effectively. Some raid bosses, such as Moltres and Ho-Oh, share a double weakness to Rock type moves, and this is when rock type attackers come in handy.

Golem is probably the best Rock type attacker as of now, or at least, the best one available. It lacks a bit of offensive power but it is overall a great Pokémon to add to your team, especially now with Ho-Oh raids.

Rhydon is a great Pokémon overall, but it lacks a Rock type fast move. If it gets Smack Down, it will outperform Golem as a rock type attacker.

Omastar is an interesting case. It does not have the best attack stat, but its legacy moveset (Rock Throw and Rock Slide) is actually better than Golem’s moveset. DPS-wise, Omastar is a slightly better choice than Golem, but having a Rock Throw/Rock Slide legacy Omastar is pretty rare, considering the fact that TMs didn’t exist back when this moveset was available. If you have one, congratulations, it’s a pretty rare Pokémon to have.

Tyranitar has the same problem as Rhydon. It could be a great Rock type attacker, but Niantic has decided NOT to give it a rock type fast move to pair with Stone Edge. However, this could change in the upcoming weeks if Smack Down is confirmed to be its Community Day exclusive move.

The following Table showcases the most relevant rock type movesets, sorted by weave DPS (without STAB).

As it can be seen in the Table above, Rock Slide is the best charge move, followed by Stone Edge. Rock Throw and Smack Down have the same move characteristics, and thus they are listed together. Keep in mind that the method used to calculate these “vacuum” weave DPS values assumes that the attacker faints right after firing off its last charge move. Therefore, the potential of one-bar charge moves is slightly overestimated. In a real scenario, some energy is usually wasted and multi-bar charge moves are more consistent.

How would Tyranitar with Smack Down perform in battle?

Let’s compare the different rock type attackers in battle. All those “vacuum” calculations are interesting but the most important aspect to consider when comparing different Pokémon and movesets is how they compare in real battles.

Several battle simulations have been performed in Pokébattler in order to observe how Tyranitar with Smack Down and Stone Edge would perform in battle and how it would compare to the other powerful Rock type attackers in the current metagame. In order to do the comparison, the raid bosses considered will be Ho-Oh and Moltres, as they have a double weakness to Rock type moves. The dodging strategy will be set to “No dodging”. 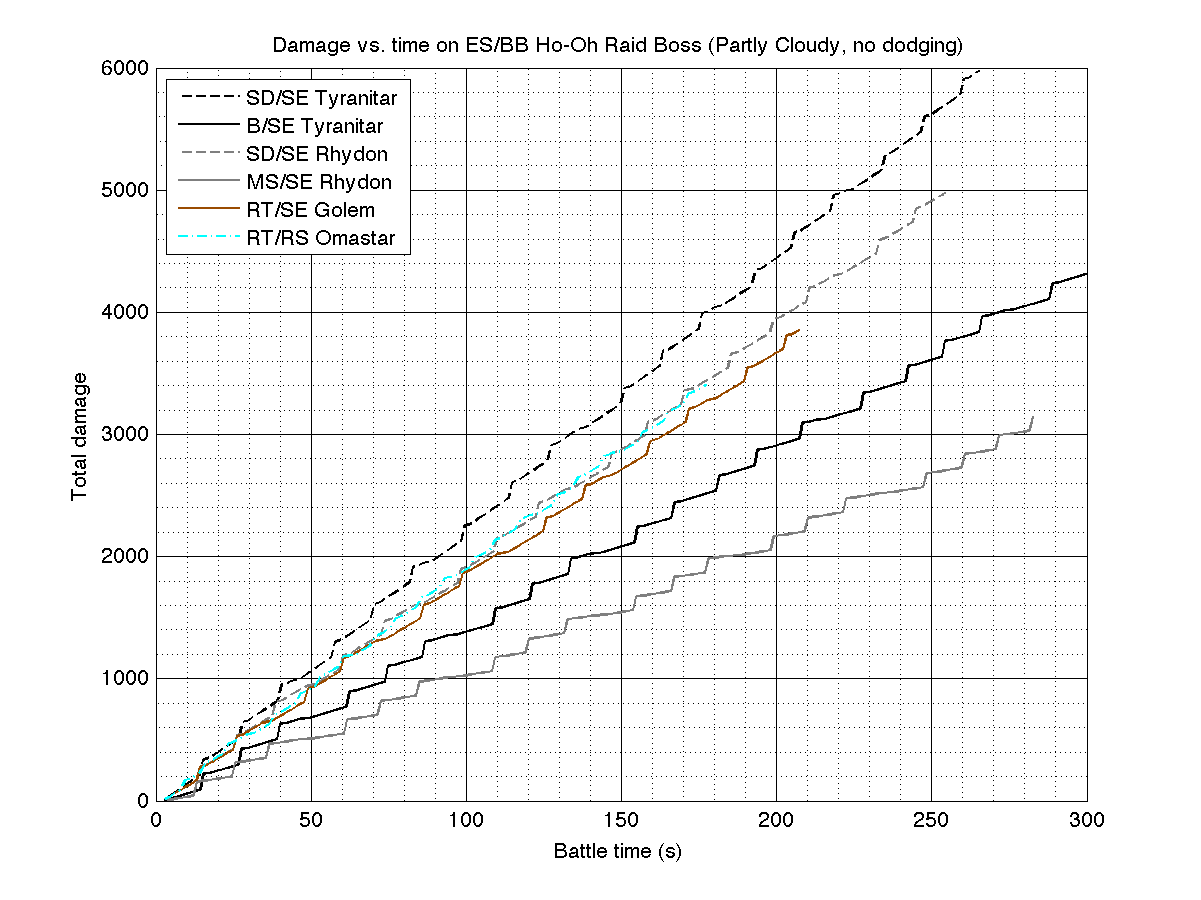 As it can be seen in the performance graph above, Smack Down Tyranitar would be a DPS monster, outclassing Golem and the other relevant Rock type attackers. Similarly, if Rhydon is able to learn Smack Down in the future, it will outclass Golem (it has a higher attack stat) and its current Mud-Slap variant.

From a time to win perspective, Smack Down Tyranitar would be below the 600 seconds mark, making it a great candidate to duo non-Solar Beam Ho-Oh under the specified conditions. Its TDO (Total Damage Output) is great too, but keep in mind that it is the only one that double resists Ho-Oh’s Extrasensory, so it has an advantage there. Omastar and Golem, the best attackers as of now, do not have nearly as much TDO as the one Smack Down Tyranitar would have. 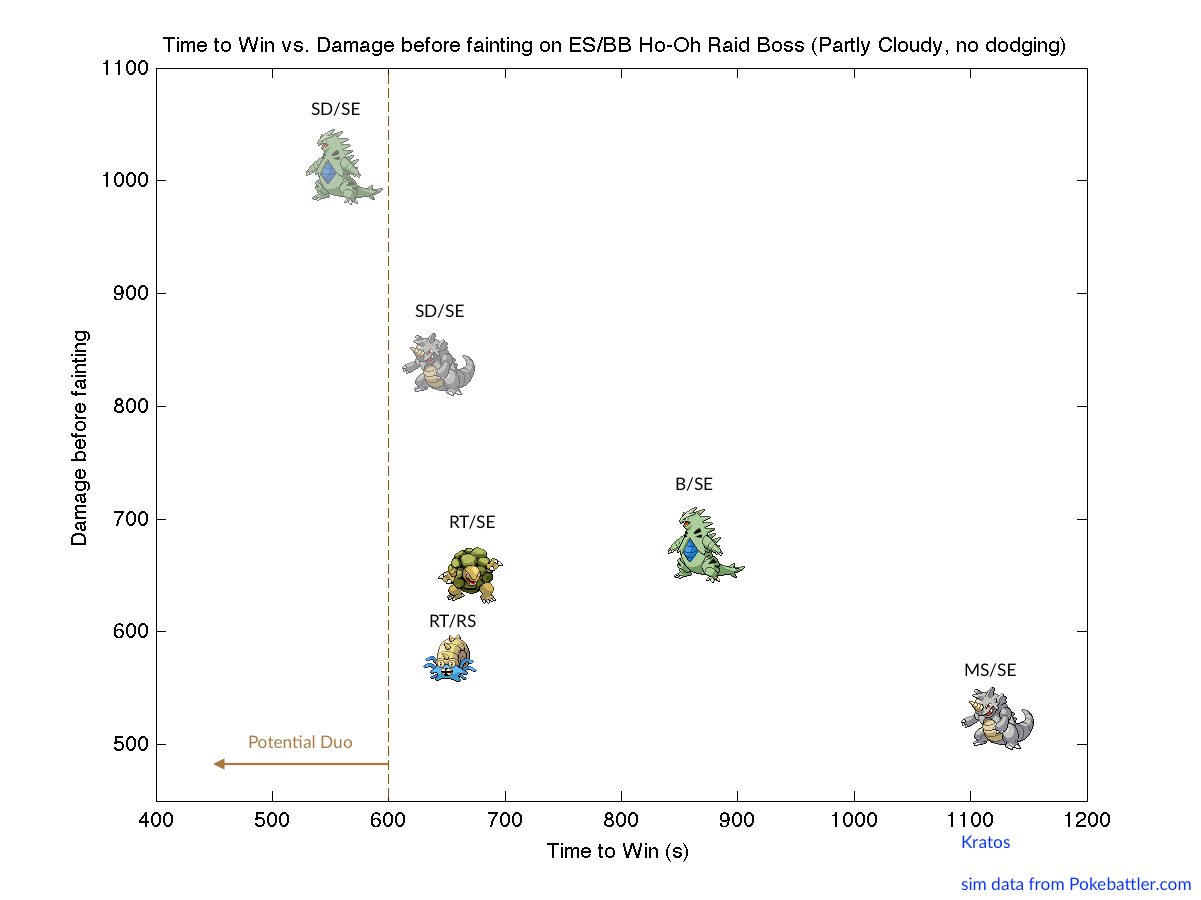 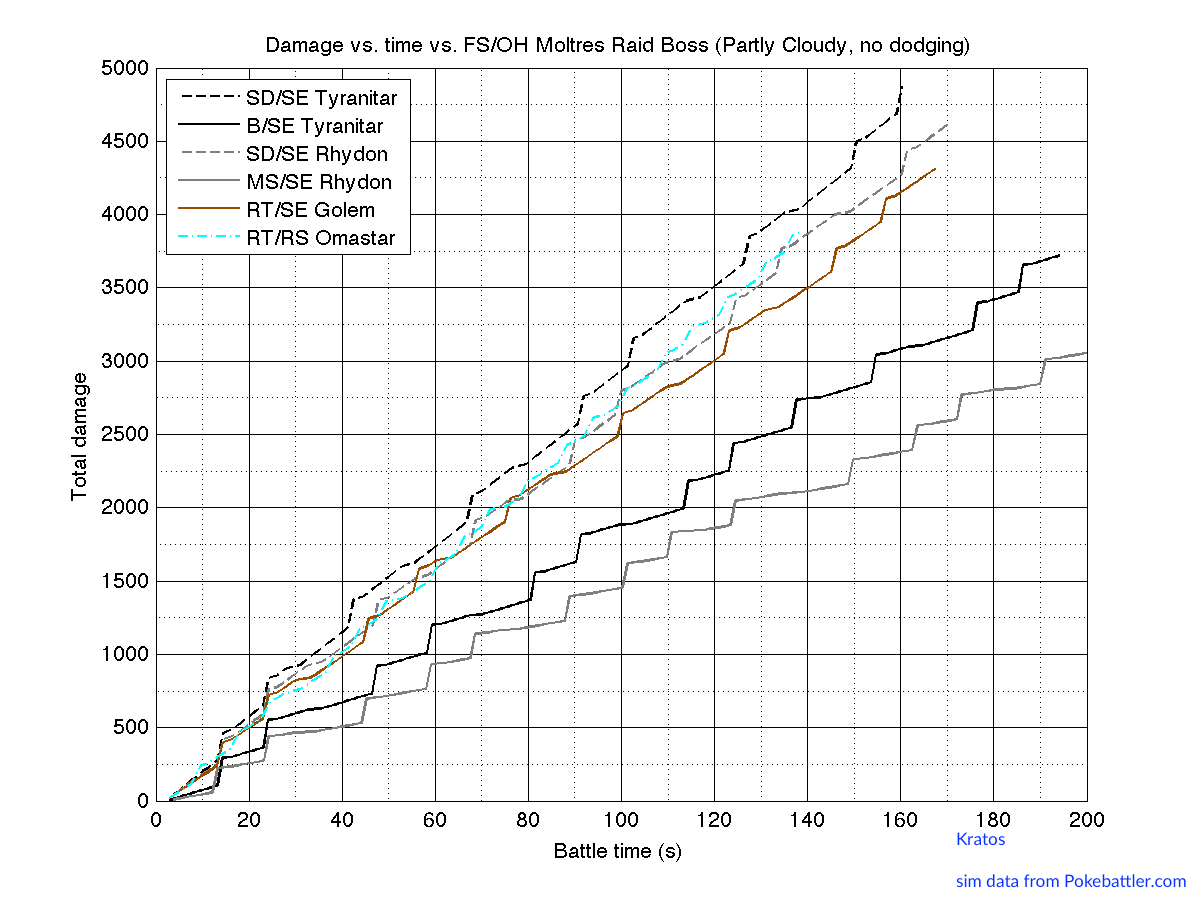 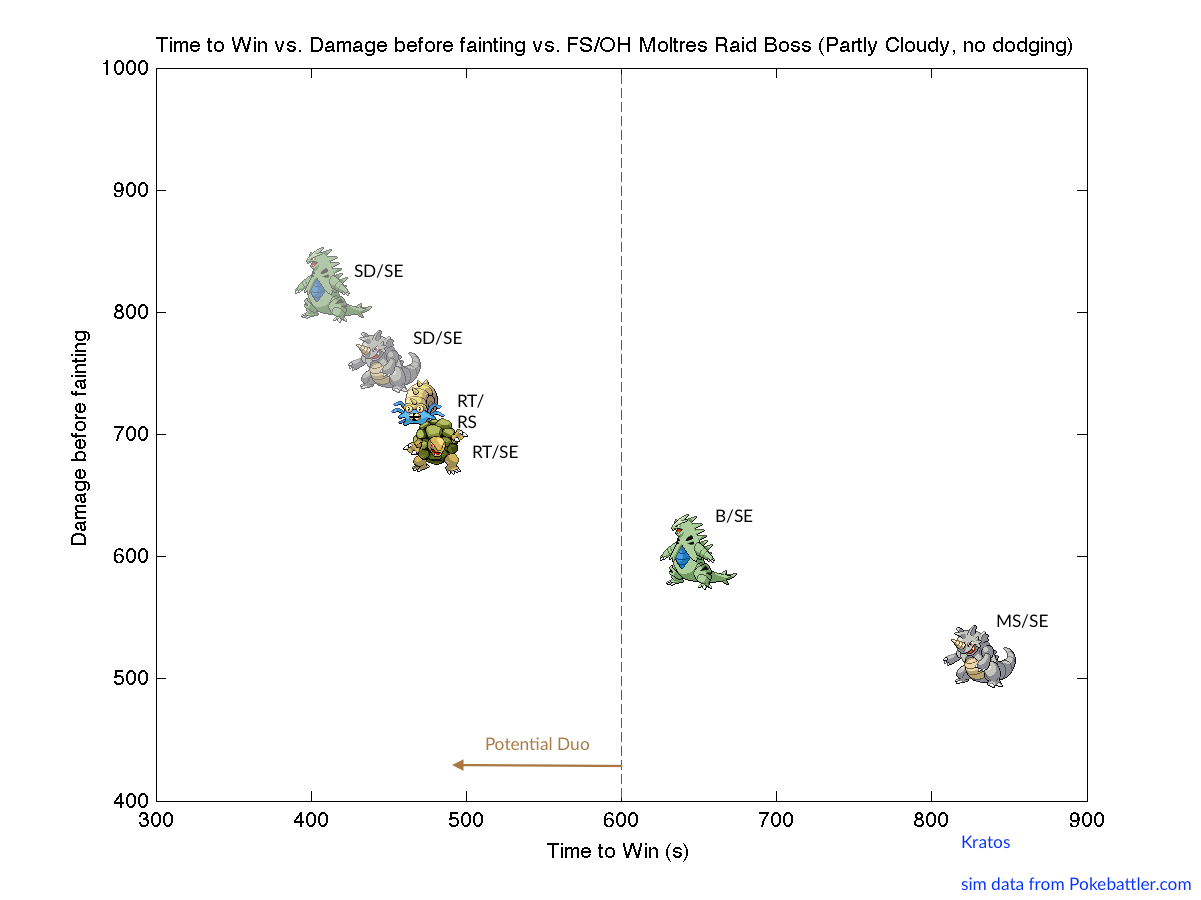 Against Moltres, Omastar is the only one that double resists Fire type moves, whereas the other attackers “single” resist them. Thus, Omastar performs really well for this specific matchup, as it compensates its lack of bulk with the double resistance to fire type attacks. However, from a DPS perspective, things did not change too much with respect to the Ho-Oh scenario, and Smack Down Ttar would still be the king of DPS and TDO.

Its potential is so high, that a team of double rock Ttar can easily duo Moltres in Partly Cloudy weather, and they can also duo it without any weather boost too!