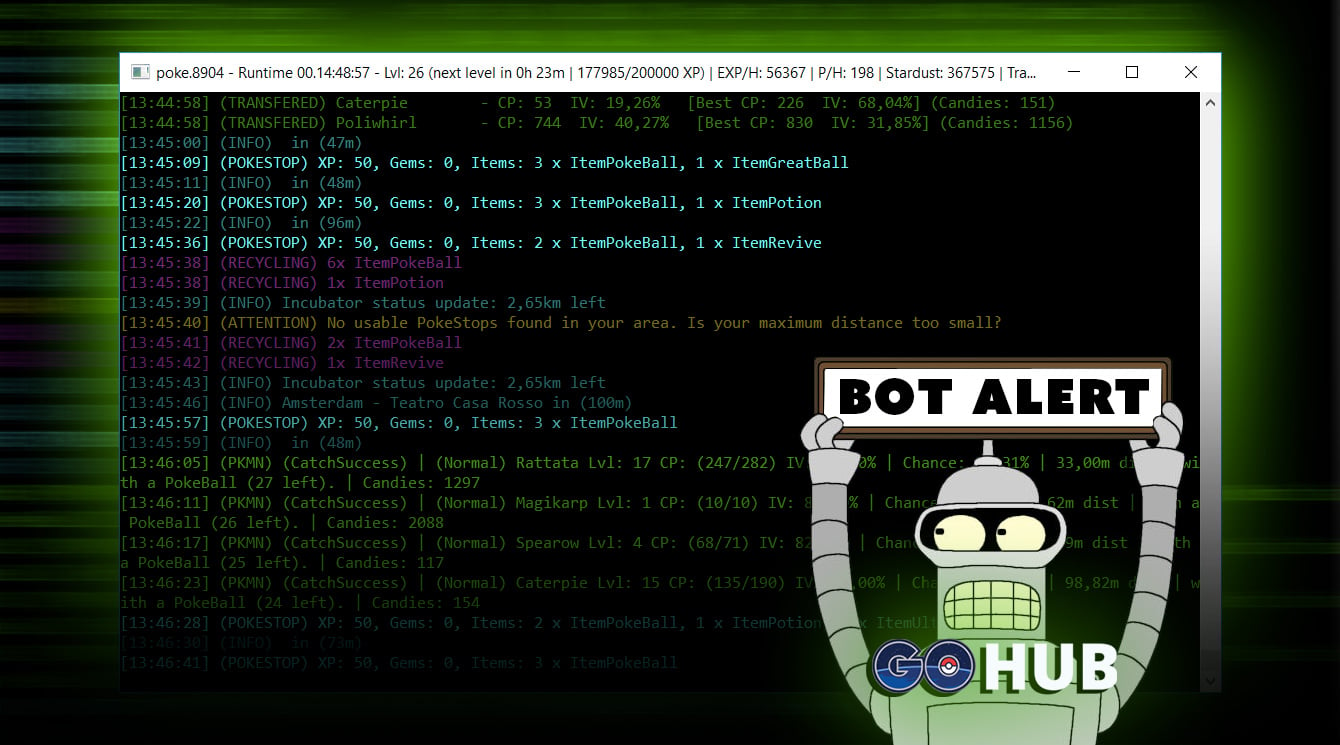 Last week, Niantic CEO John Hanke announced that “bans are coming” for Pokemon GO cheaters, exploiters and “botters”. After 3 days of research and observation on popular exploit forums, we are sad to report that Pokemon GO bots are still very much alive and kicking.

Our story began on this Tuesday, when a curious spike of inbound traffic flared our real time usage analytics.

The real time analytics showed hundreds of incoming visitors from ownedcore.com, a popular hacking and exploiting forum. We traced back the breadcrumbs and discovered that a forum user mentioned our previous article in a post on Ownedcore Pokemon GO sub forum.

The sub forum was sprawling with activity. Browsing felt like taking a stroll through a pirate haven in the Caribbean Sea.

Everything and anything is a topic here: soft bans, sniping info, bot config files, tips, advises, ban reports and spoofing tools. New soft bans and API changes get reported as soon as they’re [Detected], account market is growing by the minute and the discussions rarely stop.

There is even a real time widget for snipping rare Pokemon with GPS spoofing, powered by PokeSnippers.

It took us a while to take it all in, as the conversation here never ends.

Impressive as Ownedcore may be, we were honestly surprised by the lack of security on the forum. Even without registering, we were able to:

Anyway, after 3 days of lurking, we gathered enough information to write a follow up story.

You may think that bots are losing the fight with Niantic, but judging by our findings that is far from truth.

Following a number of threads and reports, a huge number of bots is still operational. Niantic did a number of changes to the API and geo scanning frequency, but the bots adapted in a matter of hours.

Avoiding and dealing with soft bans is one of the most popular topics of conversation. The creativity and resourcefulness bot users exhibit is astounding.

Among the threads you can find various configuration files (ie. “dratini hunter”) and instructions for popular bots.

The absurdity of it all culminates when you read threads boasting “millions of Star Dust” and “hundreds of Ultra Balls” farmed in less than 2 days. One user reported getting 180000 EXP per hour using one of the bots.

We assembled a list of the most popular and most discussed bots:

We do not want to go in detail on each of them, but in general, all of these are still functional. And used. A lot.

After spending three days on the subforum, we are not certain if Niantic will ever be able to counter the bots completely.

Some of these bots are written by authors of successful and almost undetectable World of Worldcraft bots.

Most of them have mechanisms to counter soft bans and to emulate human behaviour.

Even more, the community behind them is big enough to support and fight a large number of moves Niantic can take. In our humble opinion, these developers and user behind bots are not in for a quick buck, they’re in for the long run.

The only viable option Niantic seems to have at this point is to use their own data against them – if you are level 40, and never used a Lucky Egg, you are a cheater. If you have region exclusive Pokemon, but you’ve spent 5 hours in Asia in the past 2 weeks, you’re using geo spoofing. And so on.

We are reluctant to predict how the battle against bots will end. The bots are everywhere, and Ownedcore.com is not the only forum where communities like this are forming. They are not even the biggest one.

Niantic, your move. Pokemon GO Bots already made theirs.