Hello again, fellow Travellers! It’s time to take a brief look at the latest newly arriving Shadow Pokémon and what their impact may be on PvP. And after that I have a bunch of new Pokémon to analyze as well, AND an updated analysis on Halloween Cup (comes back April 5th!) so let’s not waste any more time and just get right to it, shall we? 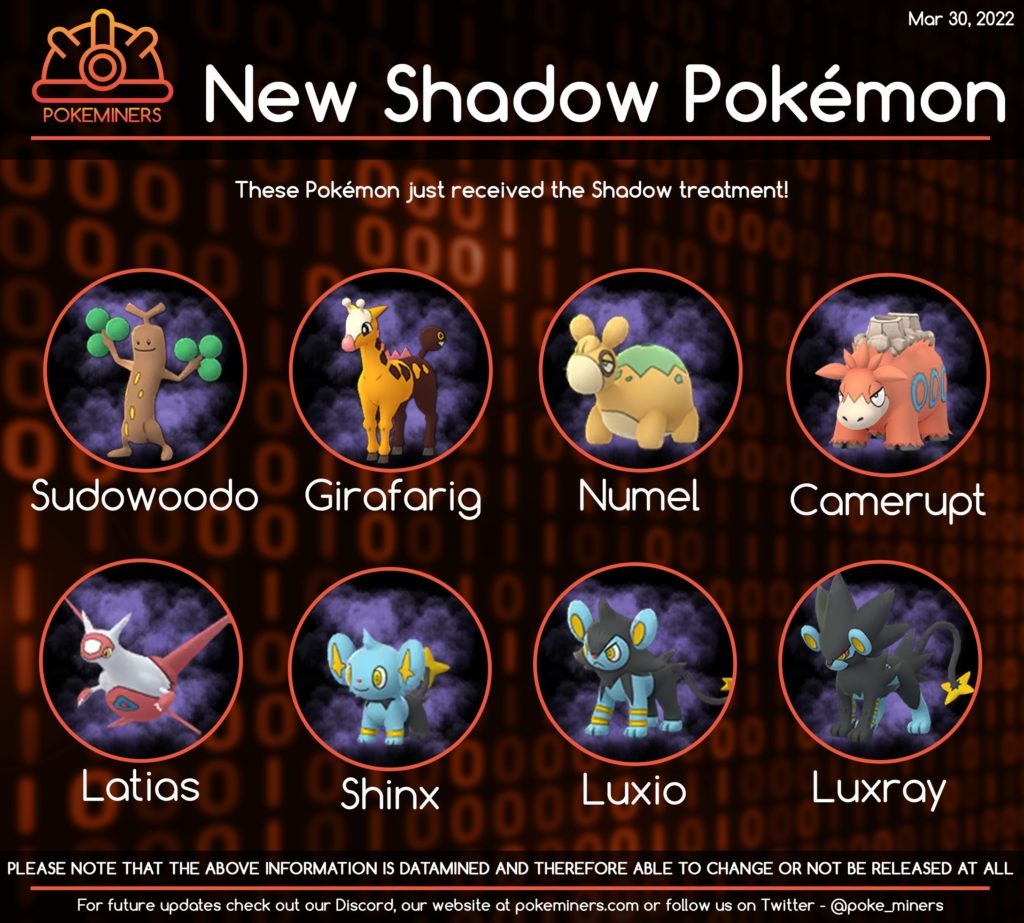 Too deep in the Shadows?

First, the good news for me as a writer, but bad news for all of us as players: most of these new Shadow Pokémon are very blah.

SUDOWOODO has seen some play here and there in limited metas, though it struggles in Open Great League with so many potent Grounds, Grasses, and Waters around to pick it apart. Unfortunately, while Shadowoodo does some nice things like better outrace Registeel and Lickitung, its slashed bulk means it’s a downgrade overall, dying to things non-Shadow can outlast like Vigoroth and things a Rock type really should beat like Charm Alolan Ninetales, Galvantula, and Lapras.

I think it IS still worth trying to pick up a good one while you can, because Sudo, again, has use in some limited metas and Shadow may find a niche there too. But it doesn’t look like it will be lifting Sudowoodo into new relevance anywhere new.

And that was the GOOD news, as the rest are even lesser. CAMERUPT, despite an enticing typing, has always been the butt of jokes in PvP, and Shadow is no better, though it’s worth noting that it CAN finally beat things like Venusaur and Meganium as a Shadow (as well as Skarmory)… which really just speaks to the major issues Camerupt has in PvP play in the first place. 😬 And uh… Shadow loses to Wigglytuff, Sylveon, and Powder Snow Alolan Ninetales. As a Fire type. Yiiiiikes.

It’s no secret, especially to my faithful long-time readers, that I have always had a soft spot for Girafa– uh, Geeriff– er, make that… um… FARIGAMARIF (I think that’s spelled correctly, right? 🤪) But if I’m being honest, it has rarely (if ever?) been a legit option in PvP, despite a tasty Psychic/Normal typing that makes it a Psychic type (and one with Confusion, at that) that actually resists Ghost damage. And don’t even get me started on its Open viability.

I went in with hope that being a Shadow might give it a new lease on PvP life, but alas. 😔 It DOES sneak a win over Drifblim now, but can no longer beat Cofagrigus or Azumarill. Sorry, Geofforig fans… we remain patiently awaiting the day that Niantic finally gives it Psychic Fangs. 👀

I’m going to hold off on LATIAS for now even though it’s a prominent part of the mined data, because it is very likely to get new move Mist Ball along with its re-release and likely Shadow makeover. So let’s just stick a pin in that one for a future spotlight analysis and move on to the last and most promising thing here….

Luxray – a ray of light!

There is one genuine winner in these latest Shadow sweepstakes, and that’s LUXRAY. Back in November it gained notable PvP viability after its Community Day as the first recipient of Psychic Fangs. Recommend reading that piece if you missed it originally, as it helps set up the rest of this write-up, but in short summary: Psychic Fangs gives Luxray the spammy bait move it needed to set up Wild Charge as an incredibly scary closer… as scary as Magnezone with its Mirror Shot/Wild Charge combo, if not moreso!

And while Luxray is already a glass cannon, and obviously even moreso as a Shadow, with those awesome charge moves and high energy fast moves making it all hum, Shadow Luxray looks no worse than a sidegrade — and is likely an overall upgrade — over non-Shadow Lux. The extra punch of Shadow adds on potential wins versus Altaria, Medicham, Lickitung, Galvantula, Greedent, Hypno, and even something an Electric really shouldn’t be beating: Trevenant! (And that’s without EITHER of Luxray’s Dark moves!)

And if that caught your attention, wait until you see Ultra League. As I again noted in November’s spotlight article, Luxray’s highest ceiling typically relies on getting good baits and then crashing in with Wild Charge, and it can fall apart at a bit if those baits don’t all work out. So tread with caution, but the potential is there for Shadow to even further break out. Feast your eyes! 👀👀

The loss of even more of its already shaky bulk means that ShadowLux falters against Greedent, Snorlax, and Charmers Granbull and Togekiss that it’s able to beat as a non-Shadow, but it gains a ton of possible new wins, including Charmers Sylveon and Clefable, Alolan Ninetales with either of its fast moves, Shadow Snorlax, Sirfetch’d, Scrafty, Umbreon, Alolan Muk (with Jab or Snarl), Cofagrigus, Bronzong, and Cresselia.

That all said, results remain much closer between Shadow and non-Shadow in other shielding scenarios (like 0v0 and 2v2 shielding), but it’s clear that if you liked Luxray before, you’re liable to love its dark side even more. If there is one Shadow to hunt down from this new crop, Luxray would be it!

So there we go! No guarantee these will all arrive during the All-Hands Rocket Retreat (running from Sunday, April 3rd to Thursday, April 7th), but that certainly seems a very good bet and is why I rushed to get this out ahead of Sunday. Either way, good luck with that, remember to TM away Frustration from Shadows old and new (assuming we’re able to do so), and may your GO Rocket balloons be plentiful!

Until next time–very likely a review of those new teased Alolan Pokémon–you can find me on Twitter for regular PvP analysis nuggets, or Patreon. And please, feel free to comment here with your own thoughts or questions and I’ll try to get back to you!

Hopefully you can find what you want, but as you search, please be safe out there, Pokéfriends. Thanks again for reading, and catch you next time!