Howdy folks! After braving the frigid winter for Kyurem for a week, it’s time to warm things up with some hot cocoa and fiery RESHIRAM, coming back with a hot signature move. And as for how it will affect PvP… well, let’s check our Bottom Line Up Front for that!

So turns out that Dragon/Fire is a pretty good defensive type combination. Fire’s standard weakness to Water becomes neutral instead, and Dragon’s famous weaknesses to Ice and Fairy both become neutral damage as well. Reshiram is left with vulnerabilities to only Ground, Rock, and Dragon, and resistances to Steel, Bug, Electric, and double resistances to both Fire and Grass. Not bad!

In terms of stats, Reshiram has about 500 more CP and 1000 higher total stat product than the Kyurem we analyzed a little while ago, with about 25 more Attack, about 35 higher Defense, but also about 35 less HP than Kyurem… in Master League, at least. In CP-capped Leauges (like Ultra), it comes in with higher Attack and still about 20 more Defense, but now badly trails in terms of HP (having about 40 less than Kyurem) and falls behind in terms of overall bulk and total stat product. Conclusion? Reshiram is built for Master League (and PvE).

Let’s see if the moves back that up….

Fire Fang isn’t a terrible move. It alone is enough to burn through most Steels and even some Fairies in Master League, plus Mamoswine and Zarude. It just unfortunately falls short against the Steel you’d probably most hope to beat: Dialga.

Nah, the way to go is likely still Dragon Breath. It deals the same damage as Fang, has wider neutral coverage (and plenty of Dragons to deal super effective damage against, whereas those same Dragons generally resist Fire), and generates more energy to get to charge moves. It’s the move you’re going to want 95% of the time on Reshiram, plain and simple.

Speaking of the charge moves, even with its new exclusive move in the mix, Kyurem has TWO charge moves (Dragon Claw and its own exclusive move Glaciate) that are both faster than anything Reshiram has to offer. That’s the bad news. But the good news is that Reshi still has affordable stuff. Both Crunch and new move Fusion Flare cost only 45 energy, still very reachable. And while Kyurem is stuck with closing moves that both cost 65 or more energy (Draco Meteor, just like Reshi, and Blizzard), Reshiram has both Overheat and coverage move Stone Edge at only 55 energy, giving it a similar overall energy curve as Kyurem when both want to finish things off with closing power.

Crunch can provide some nice coverage at times, but what would you want to target with it? Just Ghosts and Psychics, right? Well at least in Master League, Reshiram already beats Psychic types Mewtwo and Metagross and Ghost types Giratinia and… uh, other Giratina with just Dragon Breath and Fusion Flare. And adding Crunch into the mix doesn’t add any new Psychic wins. So I think we can safely push Crunch off the raft and just replace it with Fusion Flare, which performs as well (or often better) overall. While it lacks the chance at debuffing the opponent, it also deals 20 more damage (actually more than that, considering STAB) against neutral targets. I’ll take that over a chance at debuffing Defense any day, personally!

So then what to pair Flare with? PvPoke generally recommends Draco Meteor, which does make some sense considering its raw damage for the cost. But uh… in actual practice, that doesn’t look very promising. Why yes, that IS the same win/loss list as you get with just Fusion Flare. Yikes.

Stone Edge offers a little more, able to swat down Flying Ho-Oh and even Togekiss, which is a nice pickup for any Dragon.

But despite it bringing no additional coverage, my money is on the potential with Overheat, which brings in 50% more wins than Edge, including now ALL meta Fairies (Togekiss remains a win, and both Xerneas and Zacian move into the win column, which are BIG deals for a Dragon!), as well as Snorlax, and the win over Ho-Oh is even preserved too!

(Well, to be fair, technically Reshi can beat Ho-Oh using just Fusion Flare, but that depends on Ho-Oh’s timing… Ho-Oh can flip that to a loss versus only Flare, but Overheat prevents that and wrests back control over your own destiny.)

All of that is good… a Dragon that can beat every meta Fairy in Master League is a big freaking deal! But there are some downsides too.

I want to do a quick comparison between Fire-heavy Reshiram and the one Fire type that already performs well in Master League, and the one I just spent several sims throwing into battle against Reshi: Ho-Oh. With Brave Bird as a move it basically always wants, as well as fast move Incinerate for steady Fire damage, we can double down on Fire with Sacred Fire or go for more of a flexible and varied role with Earthquake. You can immediately see that both outperform Reshiram (at least on paper), but in what ways?

As a Fire that is NOT weak to Dragon damage, resists rather than takes super effective damage from Ground, and outright resists Fairy damage, Ho-Oh is able to beat all the Fairies more effectively and efficiently than Reshiram (though Zacian with Wild Charge can be scary, Ho-Oh typically still pulls that one out too), beats Ground types that Reshiram cannot (Groudon, Excadrill, Mamoswine, Incarnate Landorus), and as a Flyer that resists Fighting damage, beats Mewtwo with Focus Blast as well. (Reshi beats Psystrike/Shadow Ball Mewtwo, but falls to Focus Blast.) And crucially, Ho-Oh also roasts Dialga, whether it has Thunder or not. Neutral Sacred Fire or super effective Earthquake are both enough to take Dialga down, whereas poor Reshi takes too much super effective damage from Dialga’s own Dragon Breath to replicate Ho-Oh’s success; an unblocked Fire move would give Reshi victory, but that’s unlikely to happen often. Ho-Oh is simply better versus the big bad Steely Dragon of Master League. 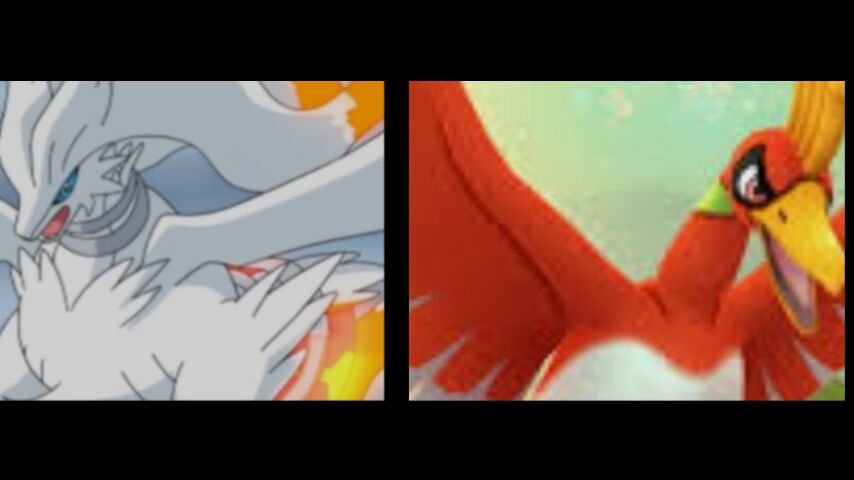 But Reshiram does come with some advantages of its own. Unlike Ho-Oh, Reshi can use its Dragon Breaths to punch out both Giratinas and even half-Water Palkia. It doesn’t have to worry about the Electric or Rock damage of Melmetal nearly as much as Ho-Oh and pulls out a win there, while Ho-Oh usually cannot. With Overheat it can knock out Snorlax, whereas Ho-Oh typically succumbs to Body  Slam first. And as mentioned in some detail above, Reshiram has the advantage over Ho-Oh in the head to head matchup.

There’s also something sims won’t show you that is a major advantage for Reshiram. Since XL Candy was introduced to Pokemon GO, Ho-Oh has been available in raids for only 5 days (January 1-5 of 2021), plus two special, one-time encounters. That’s not very long to grind for XL Candy, now is it? Reshiram, on the other hand, was available for sixteen days a year ago (December 1-16, 2021), meaning it was available to grind XL Candy for for more than three times as long as Ho-Oh. Unless you’re a marathon runner that takes Ho-Oh along as your buddy every time or something, players have had the means to work on a Level 50 Reshiram far more than they’ve had opportunity to build up resources for a Level 50 Ho-Oh. And that’s not even accounting for Reshiram being back in raids for another 10 days, starting basically right now! I think the XL grinding disparity is a MASSIVE advantage for Master League Reshiram.

And back to sims, one final plus for Reshiram to point out. While Ho-Oh has the win/loss edge in standard 1v1 shielding matchups, it is Reshiram that has the edge with shields down: between the two, Reshi uniquely beats Dialga, both Giratinas, Garchomp, Ho-Oh, and somehow Gyarados and sometimes even Kyogre, whereas Ho-Oh‘s only unique wins are Groudon, Lugia, Xerneas, and sometimes Zacian… Wild Charge is a death sentence. And in 2v2 shielding, while they share the same number of wins, Reshiram still has the better overall record since it has three ties (versus Dragonite, Zekrom, and itself) whereas Ho-Oh has no ties and instead carries around 18 losses. In that scenario, Reshi’s unique wins are mostly what you’d expect — Giratinas, Mewtwo, Palkia, and Wild Charge Zacian, along with Therian Landorus — as are Ho-Oh’s unique wins over Excadrill, Groudon, Sylveon, Togekiss, and Dialga, with Yveltal thrown in for a bonus.

VERY long story short: while a quick look puts Ho-Oh as the clear leader between the two, I think Reshiram more than holds its own and has some serious advantages of its own depending on (realistic) shielding scenarios, not to mention how it is FAR easier to build a Level 50 Reshiram than it has ever been to build a maxed out Ho-Oh, especially for players that weren’t grinding heavily for XLs a year ago. I think grinding for a good Reshi is a fine idea for those who can manage it, and with new move Fusion Flare, it’s better than ever, a true Fire threat in Master League.

Alright, that’s it for today! And thus ends our final PvP analysis of 2022! A very Happy New Year to you all, faithful readers, and here’s looking forward to another year of way-too-long analysis articles in 2023! 🥳

Thanks for your faithful readership this past year, and happy raiding! Stay safe and warm out there, and catch you next time, Pokéfriends!

P.S. – I chose not to dive into PvE for Reshi even though it projects VERY highly among Fire attackers, as my friend and colleague u/Teban54 is working up all the details on that and will have his own awesome analysis out soon, so stay tuned for that!