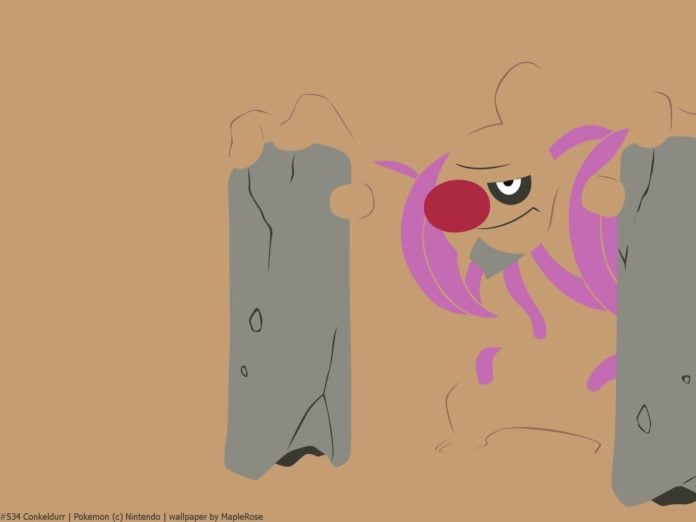 It is a well-established fact that the Fighting types are among the best Pokémon types when it comes to offense. With the highest super-effective coverage in the entire meta (tied with the Ground types), it is always a huge bonus to have a Fighting type on your team!

Pokémon Go already has some remarkable fighter monsters who have been at the forefront of gyms, raids, PvP, you name it. While Machamp has been a mainstay for nearly half a decade now and Lucario wears the crown of the DPS king and has an amazing mega evolution, the overall best Fighting type has always been…

From the Unova Region,

Weighing in at much than two concrete blocks,

It is the menacing monster engineered for hyper offense: Conkeldurr!

Be careful who you call ugly in middle school, coz this brute takes the move Counter to another level and annihilates anything that takes SE or neutral damage from it.

With the Master League running wild with legendaries and pseudo legendaries galore, Conkeldurr is apt at putting its best fist (and concrete blocks) forward and getting you the much-needed clean pin 1… 2… 3!

Tale of the Type and Match-ups

Conkeldurr is a pure Fighting type as such, is weak to the Fairy, Flying and Psychic types.

Its resistances include Bug, Dark and Rock types.

Hmm, not so impressive defensively, right?

But when it comes to offense, Conk is a powerbomb! It deals super-effective damage to 5 types that include Dark, Rock, Ice, Normal and Steel

Not only is Fighting the only type to be SE (super-effective) against the Normal type, it also deals SE damage to the Steel types, the best defensive type in the game.

Well, Machamp and Lucario do the same but remember me telling you that Conk gives an attitude adjustment to Machamp? That, folks, is because of Conk’s stats…

Conkeldurr has the following stats in Pokémon Go:

It has the same fighting mono-typing as Machamp but when you look at the latter’s stats:

Conkledurr clearly has superior stats to Machamp. It hits harder and is bulkier, making it the #1 contender for ML. Oh, and by the way, we are not even bothered about Lucario because of its silly bulk. It’s not even a Big Dog… so it won’t climb the ladder of success in the ML meta.

So Conk’s stats look well-suited for good PvP performance. But what about its moves? Let’s check them out!

Counter is the obvious choice for Conkeldurr. With a [DPT/EPT] set of [4.00/3.50], Counter is the franchise fast move for almost any Pokémon that learns it, STAB or not. With Conkeldurr’s amazing 243 ATK stat, it is the undisputed king of kings at using Counter in the game.

Poison Jab hardly has any fans even though it deals with Fairy types super-effectively. Although Poison Jab Conkeldurr can beat Togekiss in the (0-0) shield scenario, that’s about it. It lacks STAB and does not offer any other service to Conk in battles.

So when it comes to fast moves, Counter is one of the best fast moves for PvP (Arguably, even the best) and is essential for our fighter.

Focus Blast might hit hard but it is Conk’s most expensive move and stupid to use if you have Dynamic Punch already.

Stone Edge deals 100 DMG at 55 energy and offers excellent coverage against the Flying types that Conkeldurr struggles against.

So what is Conkeldurr’s ideal moveset?

This is a no-brainer. Brawn over brain here.

Acknowledge Conkeldurr: What makes it so special?

Conkeldurr is clearly the head of the table when it comes to Fighting types. So let’s summarise the USP profile of this Unovan beast incarnate:

Its high ATK stat of 243 makes it the best Counter user in ML, surpassing even Machamp. While Machamp does have a more energy-efficient movepool with Cross Chop and Rock Slide in its belt, Conkeldurr can tear down an opponent with Counter and even absorb more damage.

Time to play the Dial(game)

The value of many a Pokémon in the Master League is gauged by their ability to beat the Master of Time and ML alike: Dialga. Comparing with the same Counter + Dynamic Punch set for both Conkeldurr and Machamp in the (2-2) shields, Conk can clobber down Dialga in a little more than half a minute using Counter alone while Machamp loses to Dialga in the same situation, with Dragon Breath being too overwhelming for Machamp to handle!

Even when Machamp opts to go with Cross Chop with hopes to shell out charged moves more often, it still loses to Dialga (expected, but I’m trying to make a point here).

So what do we understand from this? Conkeldurr is undoubtedly the truly reliable Fighting type Dialga assassin in ML.

You think you know what Stone Edge does?

Okay, so Rock Slide is more energy-efficient than Stone Edge. Now both Conk and Machamp lose to Flying types like Dragonite and Togekiss unless those two flyers are low on HP in which case, our fighters can actually win.

However, it is a known fact that both Dragonite and Togekiss are top-tier ML Pokémon. So even in losing match-ups, like have your Fighting type brawler locked in a (0-0) shields scenario against Dnite or ‘Kiss, you would wish to inflict as much damage as possible right?

Performance in the Master League Classic

Conkeldurr at level 40 registers an impressive performance, taking advantage of its offensive prowess and natural bulk to bring you notable wins against meta defining Pokémon such as the following:

It mostly struggles against dragons, does manage to take off chunks of HP from Metagross and surprisingly manages to go extremely well against Gyarados. The win against Dialga is undoubtedly a major asset for Conk in the ML Classic.

Performance in the Open Master League

XL Conkeldurr is definitely a very powerful Fighting type to have as it delivers the overall best performance among fighters in PvE. But does it extend its dominance to the big, bad Open ML? Let’s see how different Conk does from its ML Classic outing:

Conkeldurr more or less replicates its performance from the ML Classic but does gain some new, unexpected wins.

Verdict: Conkeldurr in the Master League

ML Classic Conkeldurr is an appreciable Pokémon to use, gaining some sizzling wins against the non-legendary meta and topping Dialga. You can still use your level 40 maxed-out Machamp instead.

In the Open ML, XL Conkeldurr is surely an improvement, using its offensive potential to the maxima. It can farm against Dialga with shields and deliver a powerful Dynamic Punch or Stone Edge to the next Pokémon. This way, XL Conkeldurr can use Dialga as a set-up and potentially sweep. The high ATK stat really does reinforce the rampaging abilities of Counter, making XL Conk a dangerous Pokémon in the Open ML.

Complemented with the PvE potential of an XL Conkeldurr, this Pokémon is definitely an amazing addition to your level 50 Pokémon.

Verdict: XL Conkeldurr is a major YES! This is literally the Counter you need for consistent success in the Open ML. Machamp is still a good alternative in the ML Classic.