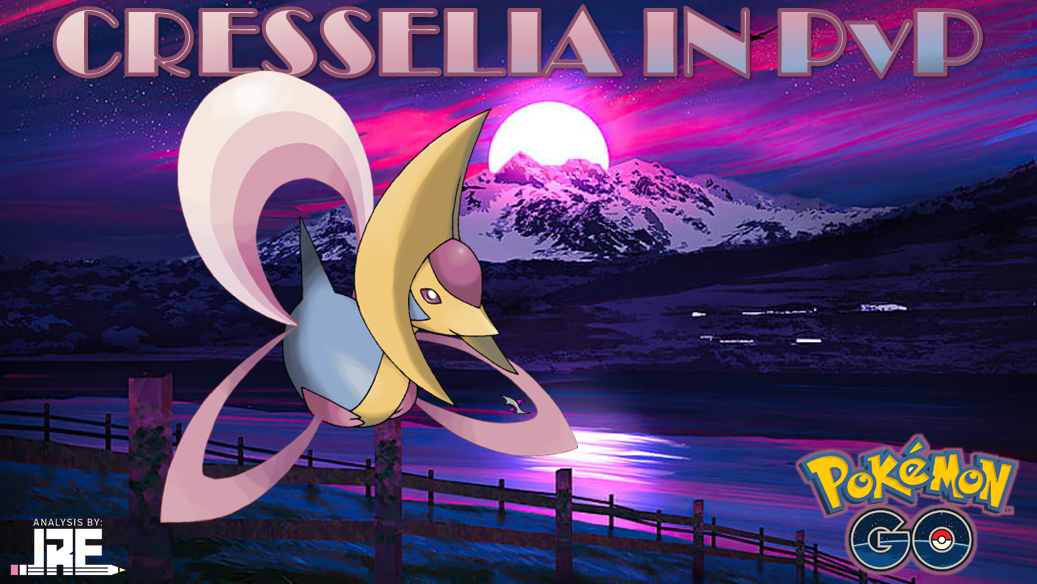 It’s a full moon! The “Under The Lights” article series provides some deeper dives on Pokémon of particular interest in PvP. And while today is not the first time I have reviewed this particular Legendary Pokémon, it’s been over two years since I last did so, and a TON has changed since then.

So let’s welcome today’s guest, the current star of 5-star raids, the one and only CRESSELIA back… under the lights.

The typing first, then the stats. Pure Psychics like Cresselia are weak to Dark, Ghost, and also Bug damage, and resist Fighters and opposing Psychics.

Pretty sure if you look up “tank” in any major dictionary, there’s a picture of Cressie there. (Or at least one someone has scribbled into the page.) Sub-100 Attack ‘mons are a rarity in Great League, but here we are. (Pretty much the only other meta ones are Bastiodon, Azumarill, Registeel, and Diggersby… even things like Hypno, Greedent, Jellicent, Skarmory, Dewgong, Tropius, Galarian Stunfisk, and even Defense Deoxys have over 100 Attack in Great League.) And the crazy thing is that Cressalia FEELS more powerful with its potent moves, hitting legitimately hard when it does throw charge moves out there.

In fact, let’s just skip ahead and check the moves out:

So you’re almost always going to see Cress running Psycho Cut, a clone of Mud Shot/Thunder Shock/Poison Sting that you’re likely to see far less often than any of those, since really only Cress, Mewtwo, and Malamar will ever be caught Cutting it up in PvP. (Oh, the puns… darn you, JRE!) And it makes sense, with Cresselia having varied and hard hitting charge moves that you want to slam the opponent with as often as possible.

But why NOT Confusion? Nearly everything else that has Confusion wants to run it. You may be surprised to see later that it’s quite good on Cress too… but more on that after we add the charge moves into the equation.

Thank goodness for Grass Knot… not so much for the coverage it provides (though it can certainly be threatening to common Water, Ground, and/or Rock types), but simply for the fact that it’s the only move Cressie has that is less than 60 energy!

Things used to be so bad that folks used to run the terrible Aurora Beam simply because it was “only” 60 energy as compared to Futuresight and its 65 and at least provided some coverage. Back in those bad old days, Moonblast cost 70 energy (for 130 damage), making Beam even more important as Cressie’s only “bait” move… not a great place to be. Granted, she still showed up in PvP just because her amazing bulk and Psycho Cut let her still compete, but again… thank goodness for Grass Knot (and the welcome improvement to Moonblast since back then).

But all of that is probably well known already to folks that regularly PvP. So let’s quit messing around and just get to the numbers, shall we?

These days, Cresselia’s generally best moveset includes Grass Knot and Moonblast, which provides pretty good coverage (resisted only by Steels, Poisons, and Fires… two of which resist ol’ Aurora Beam anyway). Run with the standard Psycho Cut, that looks like this in Great League. It makes Cresselia a Psychic type that can beat scary Darks like Obstagoon and Scrafty, tons of things weak to Grass Knot (from Stunfisk to Dewgong to Azumarill to Politoed to Mud Boys), and plenty of things Psychics should beat (Fighters and some notable Poisons), plus all the big Charmers and things no Psychic should beat, like Melmetal (dealing all resisted damage!) and other big Psychics like Shadow Hypno and DD.

It’s even fast enough to outrace Diggersby and Altaria! Short of Ghosts, most Darks, and things that heavily resist its moves (many Grasses, most Steels), Cress is just a tough out that can grind many things down. It’s easy to see why the Psycho Cut/Grass Knot/Moonblast variety has grown so popular.

But as I hinted at above, there are other ways to go about it. How about if we substitute Confusion? The gut reaction is to think that’s a big mistake, taking away important energy generation to pump out those rather expensive charge moves. And while moving away from Psycho Cut does indeed mean that those Dark wins (Obstagoon, Scrafty) fall off, as well as that sneaky win over Altaria (no more taking it down with Moonblast in time), the rest is all good news… very good news.

Now wins pop up versus (in alphabetical order) Abomasnow, Galvantula, Greedent, Haunter, Lickitung, Shadow Nidoqueen, Talonflame, Tropius, and Venusaur. Some of those are for obvious reasons, with Confusion being notoriously problematic for Poisonous Haunter, Venusaur, and Nidoqueen, but that doesn’t make them any less impressive. Also impressive are outbulking things like Tropius (with either fast move), Greedent (another notable chonker with scary Crunch), and Lickitung (who deals super effective damage throughout the battle with Lick), and outlasting Abomasnow, Galvantula, and Talonflame despite them all resisting Grass Knot (and Moonblast, in Talonflame’s case). Turns out big Confusion damage, even with something with sub-100 Attack, still adds up nicely!

Now I know what you’re thinking… surely other shielding scenarios will show Psycho Cut taking over. Two-shield especially, where the lack of speed (and likely less charge moves Cress is able to reach) should mean advantage Cut, yeah? Surprisingly, it’s not that simple: Confusion still holds up well in comparison to Psycho Cut, even being a hair better overall! Cut is again uniquely capable of outracing Obstagoon and Scrafty (and fellow Dark Shiftry), plus Diggersby and Dewgong. But Confusion still takes out Haunter, Venusaur, and Nidoqueen (and now Shadow Victreebel too) with big super effective damage, outslugs and outtanks Greedent and Tropius, wins the mirror versus Cut Cress, and somehow even overcomes Skarmory! It deals nothing but resisted damage and absorbs a Brave Bird along the way and STILL wins. Crazy stuff.

Incredibly, even with shields down, Confusion is again arguably better than Psycho Cut, and the differences should be familiar by now: Obstagoon and Altaria for Cut, as well as Pidgeot and Jellicent, with Confusion instead beating down Lickitung, Venusaur, Victreebel, and Galvantula, big Charmers Wigglytuff, Clefable, and Alolan Ninetales, and counterintuitively, Dark-type Shiftry, who can actually tank a Moonblast and survive the serious of one damage Psycho Cuts around it, but not the six-damage Confusions.

Now that all said, the sheer pressure that comes with Psycho Cut IS legit for sure. And with really good PvP IVs, Cut Cresselia comes into potentially a lot more success, now with pickups versus Abomasnow, Froslass, CharmTales, Pidgeot, Serperior, Munchlax and more. The only problem? Confusion Cress has a similar boost from good IVs, with its own new wins versus Froslass, CharmTales, and Munchlax just like Cut, and two of the wins Cut usually has sole claim to: Scrafty and Altaria!

But Cresselia is perhaps even more popular in Ultra League, with a similar performance to what it does in Great League. But yet again, I’m going to mess around with the norm. First, rolling with Confusion has an uptick similar, again, to Great League. The raw power of Confusion continues to do in Poisons like Nidoqueen, Venusaur, and Gengar, plus Abomasnow, Charizard, Articuno, and Charmers (Clefable and Sylveon), with Psycho Cut instead outracing Obstagoon, Defense Deoxys, Shadow Dragonite, and Altered Giratina (with Breath or Claw). Good points on both sides, but slight advantage to Confusion. But allow me to introduce another wrinkle: Futuresight.

While in Great League the only scenarios in which Futuresight is superior to Grass Knot are when shields are down, at Ultra League level, Futuresight works well alongside Psycho Cut, giving it higher marks than Grass Knot/Moonblast with either fast move. For the record, as compared to PC/GK/MB, PC/FS/MB beats several things that Confusion usually touts on its own (Nidoqueen, Venusaur, Gengar, Abomasnow, Charmers), plus Snorlax (regular and Shadow) and Meganium.

Confusion with Futuresight is okay too, but merely a sidegrade to Confusion with Grass Knot, beating Shadow Lax and Meganium, but losing Gyarados and Articuno (the latter due to the bait speed of Knot). At least in the standard 1v1 shielding scenarios, it would appear that while there are several viable moveset options, the “best” is actually Psycho Cut with both bombs (Futuresight and Moonblast).

It’s probably not surprising that PC/MB/FS is the best overall with shields down too, blowing away PC/Grass Knot and even Confusion sets; Psycho Cut with both big closing moves is kind of a no duh if you KNOW shields wont’ be entering the equation. But it’s also probably not surprising that in 2v2 shielding, Futuresight (even with Psycho Cut) starts to lag behind Grass Knot, which is especially pronounced with Confusion/Grass Knot (which achieves double digit more wins than Psycho Cut). So the funky Futuresight gains are decidedly NOT universal in Ultra… Grass Knot and Confusion both definitely still have a place… as does Cresselia itself, of course!

So yes, in some ways you’re probably walking away from this analysis knowing what you already knew: Cress good. But perhaps you HAVE learned a little bit about what MAKES it good, and that messing around with movesets and going against the crowd and the touted “best” moveset can potentially make Cresselia even better.

Don’t always blindly follow the crowd… while the standard Psycho Cut / Grass Knot / Moonblast version works very well, there are other ways to go that may very well fit your team much better. If nothing else, I hope this at least gets you to think about that and what you may want to do with YOUR Cresselias!

Let’s wrap it up with a quick summary:

And there we have it… Cress is good, and hopefully this gave you insight on WHY, and how best to deploy it in battle!

Until next time, you can always find me on Twitter with near-daily PvP analysis nuggets or Patreon. But do feel free, of course, to reply to this article with your own thoughts below… I always like kicking off further discussions among my fellow players!

And thank you for reading… I always appreciate your support, attention, and encouragement. Catch you next time, Pokéfriends… stay safe out there, and happy raiding!

(Photo credit to Xous54 for the sweet Cresselia in the header image.)