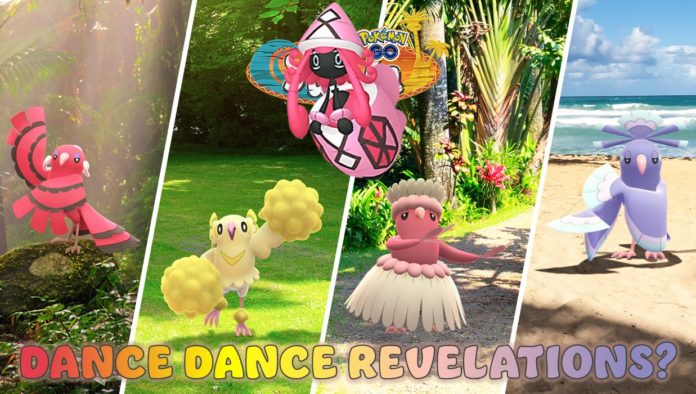 Hello again, fellow PvPers! A new event arrives this week, the Festival of Colors, and this year it’s worldwide! And we have a new Pokémon on the way, and another new Legendary likely coming soon behind it, so let’s take a look at how they perform! Before we go into the nitty gritty details (good and bad) though, let’s sum up with our Bottom Line Up Front:

Alright, the table is set, so now let’s dive in!

A FESTIVAL OF… MONOCHROME

So I’ll keep this one brief, as there’s really not all that much to say about ORICORIO. While a couple of them have some interesting typings, all have the same issues: stats and moves.

First, the stats. They don’t have awful bulk or anything, but they barely cross 100 Defense in Great League and hit only 130 in Ultra League (on average). Overall, it’s less bulky than things like Trevenant, Swampert, and Beedrill, and in the same overall territory as Machamp, Charizard, and Dragonite. We’ll call it “below average”, though not THAT bad.

The larger issue is the moves. I’ll discuss the fast moves more in a short bit, but for now the relevant thing to mention is that neither generate any higher than the average 3.0 Energy Per Turn (EPT). Normally you’d like to see that paired with at least one impactful, low energy charge move (decent damage or a buff/debuff effect) and maybe one or two moves with closing, knockout power. But at best, Oricorio can only check one of those boxes: Hurricane is a decent closer, with 65 energy for 110 damage, the same as viable move Sludge Wave. (Slightly worse than, say, Payback and Moonblast and Outrage and fellow Flying move Acrobatics that do 110 damage for only 60 energy, but still… not bad.) The larger issue is lack of a decent bait move. The closest Ori has right now is Aerial Ace, one of the most boring moves in PvP. Yes, it “only” costs 45 energy, but all you get for that is 55 damage with no other effects. The only Flying move with a worse energy-to-damage ratio is Air Cutter (55 energy for 60 damage)… which Oricorio is also stuck with.

That’s it. That’s the whole array of charge moves they come with. And that’s… ungood.

So bad is it that the very best of them, which happens to be Baile (the half-Fire one) thanks to typing and resistances, barely gets a 25% win rate against the Great League core meta. Now winrate is, of course, rarely the whole story, but it IS a good indicator. More of an indicator is what a Flying/Fire type like Baile can’t beat. Things like Beedrill and Ariados and Medicham and Gourgeist and Kommo-o and even freaking Yanma… things that deal, at best, neutral damage (and often resisted damage) while taking a steady dose of super effective Flying damage in return… and yet they all beat Oricorio head to head. That’s a bad, bad sign.

But maybe, MAYBE, Niantic has a plan in mind for the future. Because Oricorio’s signature move, Revelation Dance, changes to match the secondary typing of each version of Oricorio in MLG, and presumably would operate the same way in GO, just as we have different types of Weather Ball that match up with each respective Castform. So let’s dream big and imagine: what if Revelation Dance were to arrive looking just like Weather Ball? Better still, what Weather Ball was before the nerf: 35 energy for 60 damage, a fantastic PvP move that would give Oricorio the type of spam move it really seems to need PLUS an on-type coverage move rather than being stuck with all Flying damage. Surely that would help, right?

Well, you’d think so, but the disappointment continues. I have a local copy of PvPoke running on Apcahe on my home laptop, and can force feed new moves, so I did, creating 35 energy/60 damage versions of each of the four flavors of theoretical Revelation Dance. (Fire for Baile, Psychic for Pa’u, Electric for Pom-Pom, and Ghost for Sensu.) As you can see on those results I just linked to, they ARE all better, just none drastically so to the point of pulling them completely up from the duldrums. But here’s what I found:

Long story short, though… again, the best of them is still south of a 40% win rate. And this is with basically the best-case-scenario versions of Revelation Dance, clones of Weather Ball that was so good it had to be nerfed, and of Icicle Spear that has exploded onto the scene in all three leagues in GBL.

Let’s be honest: if Oricorio isn’t getting it done even with this type of Revelation Dance, what hope is there for it?

Just a small hope… likely a fool’s hope, at this point. That hope is Astonish.

Oricorio’s other fast move, Air Slash (3.0 Damage Per Turn and 3.0 EPT, a.k.a. exactly average), is, I think, unlikely to be tweaked. Flying type has other fast moves like Wing Attack (higher energy gains) and Gust (high damage) that leave Air Slash, sitting right in the middle, as a stabilizing force. Astonish, a Ghost move, also has some stiff competition (like Hex and, of course, Shadow Claw), but it’s an absolutely awful PvP move (3.0 EPT, but only 1.67 DPT). It’s been LONG speculated (hoped?) that it will see a buff in a future update. We’ve been waiting a long time, but especially as Niantic continues to give it to new things, here’s hoping it gets that long-awaited buff sometime. IF it does, Oricorio (and many others like Decidueye, Dusknoir, Runerigus, and Hoopa) could suddenly become actual, useful PvP weapons.

Well, I tried. I have Oricorio their best moves in the present and likely best case scenario for the future, and they just flop. This is just a non-starter of a PvP Pokémon, regardless of form. (And no, you don’t need to wonder about Ultra League… it’s even worse. 😬)At least now you don’t have to worry TOO much about grinding for it and/or trading for those from other parts of the world, except just for collection purposes. I don’t see their stock going up much barring a drastic move shakeup that would affect a bunch of other Pokémon and shake up the whole meta anyway. Nothing doing here, folks… sorry!

Hey, YOU try coming up with a better title for this section. 🙃

Anyway, let’s talk about TAPU LELE for a minute. After the subpar performance of Tapu Koko, is there perhaps more hope here?

Well, some, yeah. While many players — PvP and PvE alike! — were hoping for our first Legendary Charmer, that was not to be. Instead, Lele gets… Astonish. 🤢

Sure, it’s no Charm, but Confusion is plenty good in its own right. It’s a slow “fast” move, taking four full turns (2 real-time seconds) to cycle through its cooldown, but in that amount of time it deals a base 16 damage and generates 12 energy (4.0 DPT, 3.0 EPT), which is actually rather excellent. In fact, it’s a decent sidegrade to the Charm Lele everyone was hoping for in Ultra League, though obviously neither are great. For the record, Confusion beats things that Charm cannot like Gengar, Greedent, Charizard, Articuno, Lapras, and Politoed, while Charm is obviously better versus Dragons (beating Origin Form and Altered Form with Dragon Breath), Psychics like Armored Mewtwo, Darks like Umbreon, and Swampert as a bonus.

But what’s much more interesting is Master League. In Master League Classic, the results are probably what most players would expect: Charm Lele outshines Confusion Lele rather convincingly. But Confusion is far from BAD. As long-time readers will remember when I wrote about the surprisingly solid performance of Confusion Meloetta in Master League:

“…what other Confusioners really compete up [in Master League]? Mewtwo (who often runs Psycho Cut instead anyway) and uh… yeah, that’s really about it, isn’t it? All-out Psychic Pokémon are a rather rare commodity in Master League, so Meloetta Aria gets to flex its high CP and fill a gap… if you’re willing to invest some serious rare candy into making it happen.”

Confusioners are actually a pretty rare commodity at Master League level. And while Lele is no Meloetta, it gets to feast a little bit too, beating things Charm Lele can’t like Snorlax, Rhyperior, and Charmers Togekiss and Sylveon. But, yeah… Charm is still better. It instead overpowers Dialga, Zekrom, Zarude, Landorus, Mewtwo, and Walrein… again, in Master League Classic.

But here’s the good news. If someone were able to actually grind for it (and you KNOW those players are out there), Confusion Lele actually surpasses Charm Lele in Master League Open. Charm continues to uniquely beat Zarude, Zekrom, Mewtwo, and Landorus (though only Incarnate this time), but look at Confusion: it still gets its own unique wins over Snorlax, Rhyperior, and the Charmers, but it can now also overcome Walrein and Therian Landorus, and gets a win over Florges as well. The only Dragons it can’t take out are Dialga, Giratina, and Zekrom, but that’s no shame as even Charm Lele dies to Dialga and Altered Giratina at this level. It can’t beat Zarude, true, but DOES still overcome Yveltal, and of course still takes out Fighters. And beating fellow Fairies (including, yes, Zacian with any of its charge move combos) is HUGE. Maybe Level 50 Tapu Lele is a pipe dream for most players (🙋‍♂️ myself included!), but if you find a hundo… hold on to it. It could make an interesting future project. There’s SOME hope here, at least!

It may be an unrealistic build, but full-on Master League Tapu Lele is worthy of consideration. Personally, if I had to pick a Confusioner to build for Master League it would be Meloetta instead… but not everyone has that option, and/or has an Aria worth investing in, since we only have one (so far, and perhaps forever) and a 10-10-10 or the like just ain’t worth it. With Lele, you can grind for a good one, and if you find it, hold onto it. You may actually want it one day. There’s a lot more potential than there is for poor Tapu Koko, at least!

Alright, trying to keep it short (for me, at least! 😅) and sweet, we’ll wrap it up there. Oricorio is just about to arrive in the Pacific as I write this, after all! Try and just relax and enjoy this event without stressing about Oricorio too much… and that includes lamenting too much about only having access to one or two of the four different forms. You’re not missing out on too much. Grind for some shinies, enjoy the return of Druddigon to raids, and try to take it easy before whatever the “Lush Jungle” event has in store NEXT week. No rest for the weary… so rest up THIS week while you can.

Until next time, you can find me on Twitter for regular PvP analysis nuggets, or Patreon. And as always, please feel free to comment here with your own thoughts or questions and I’ll try to get back to you!

Whether you grind hard or kick your feet up during the Festival of Colors, please be safe out there, Pokéfriends. Thanks again for reading, and catch you next time!