Under The Lights: Pidgeot in PvP 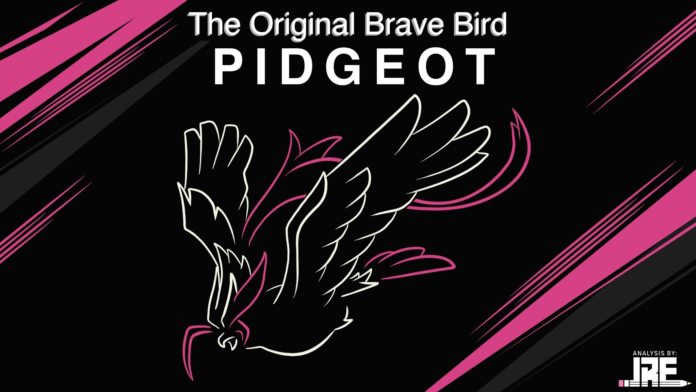 The “Under The Lights” article series provides some deeper dives on Pokémon of particular interest in PvP. Today, that means expanding on my last major article with a special spotlight analysis on the original Pokemon big bird. That’s right, it’s time to put Pidgeot and its various fast moves… under the lights.

So after being forced to sit on the sideline all of last GBL season, Pidgeot is back in Season 9. Yes, it got nerfed a little bit, but it’s still very potent and very, very popular right now. So much so that out of everything from the recent move rebalance, from Weather Ball nerf to Megahorn’s big buff to Cofagrigus rising from the grave and everything in between, the #1 thing people pinged me on in replies to my rebalance article and in DMs in the days since has been on Pidgeot.

How good is it really? (Is it truly worthy of the title of Birb Jesus?!) Is it worth building for Ultra League? And the most common questions: what fast move should I use my Elite TM on? Can I even get away with NOT using an eTM?

I could do an article twice this length on ALL the various move combinations of Pidgeot, but I want to hit at the heart of these questions with a more direct analysis. So I’ll be looking to answer those big three questions:

Yes, this is mainly going to be a moveset analysis, but some quick notes on the stats and typing first:

Those are the important highlights. And now, to the moves!

Okay, here we go: ALL three Flying fast moves are viable. Yes, even Air Slash. You don’t HAVE to burn an Elite TM for Gust or Wing Attack if you don’t want to, and Pidgeot will still be a very potent PvP Pokemon. I want to stress that point up front, because it’s also the main impression I hope to build the case for with the rest of this article.

Now, that all said, Gust and Wing Attack ARE better moves, and you’ll see end up with slightly better results in PvP. Gust is, on paper, strictly superior to Air Slash, but it can be awkward to use in battle because of its very long cooldown.

It’s possible for the opponent to outrace you to a charge move or an extra fast move or two that sims won’t necessarily show because, in the actual heat of battle, you’re sitting there waiting for Gust’s animation and damage to finish registering while hammering away at the screen (presumably on the button to fire off a charge move) as the opponent beats you to the punch.

Conversely, sneaking in an “extra” Gust under the opponent’s charge move can sometimes flip things heavily in your own favor, as the damage and energy gain from that slow-to-windup Gust essentially “for free” can have a massive impact. Double edged sword.

Air Slash is outclassed by Gust on paper but has the advantage of lower cooldown time, making it a bit easier to use. And of course, it’s the only Flying fast move currently available on Pidge, so it’s the easiest to acquire on newly-built Pidgeots.

Wing Attack is the (comparatively) high energy move of the group. 3.5 Energy Per Turn isn’t anything crazy, but it IS noticably superior than Slash and Gust at racing to charge moves, and has been a fantastic PvP move on things like Golbat, Mantine, Gliscor/Gligar, and (Legacy) Charizard in multiple leagues.

And it’s also the move that really prompted this article in the first place, as my recent PvP analysis on the GBL Season 9 rebalance covered (among many other topics) Pidgeot’s return to GBL and the slight nerf to charge move Feather Dance.

In my analysis I looked at the most common Pidgeot: ones running Gust. Replies and DMs then blew up with questions on Wing Attack and even Air Slash as alternatives… and so here we are!

The one move nobody brings up is Steel Wing, and it’s understandable why. It’s actually NOT a bad move — you may recall Skarmory was very successful with it in Flyinf Cup and such in the past — just the inverse of Wing Attack with DPT and EPT literally swapped. The problem is that it lacks STAB and with its lower-than-other-options EPT, it kind of works against what Pidgeot wants to do. It’s on the outside looking in for this analysis.

Name a non-Sky Attack Flying move off the top of your head, and Pidgeot likely has it! The only Flying charge moves it lacks are Sky Attack and the rare Drill Peck and Fly. (Well, and Aeroblast, but that’s a special one just for Lugia.) As for the rest that it DOES have in its arsenal:

So first let’s knock out the big differences that came with the nerf to Feather Dance. I already mentioned how Gust was affected in the rebalance article, but to quickly review (and pluck those sections from the other article):

That’s really it, though… Gust Pidgeot is still left with a fantastic win rate versus the Great League (68%) and Ultra League (72%!) established metas, and it’s still a beast that will only rise in usage from here.

But how did the change affect Wing Attack? Let’s look!

In Ultra League 0v0 shielding, by the way, I didn’t see any notable win/loss changes, so I’d say that WA Pidgeot handled the Dance nerf much better in Ultra than in Great League.

So all that out of the way, where does Wing Attack Pidge stand now? Well in Great League, at least on the surface, it appears to actually be BETTER than even Gust in both 1v1 shielding (compared to Gust) and with shields down (again, as compared to 0v0 Gust). Conversely, in Ultra League it would appear that it is Gust that is slightly but consistently superior overall to Wing Attack. So what’s going on here?

Well, let’s start this as simple as possible: with some table results of what Gust, Wing Attack, and even Air Slash are able to beat in different shielding scenarios.

Let’s start in Great League with the common 1v1 shielding scenarios. Before we get into the differences, here is what ALL three of those fast moves can beat, one on one, when utilizing Feather Dance and Brave Bird as the charge moves:

I want to specifically point out all those Ghosts! Pidgeot’s Normal typing really saves it here, as even those with charge moves that deal big neutral or even super effective damage to Pidge (Jellicent with Ice Beam, Drifblim with Icy Wind, Haunter with Sludge Bomb, etc.) just can’t outrace it with all their Ghost damage being so ineffective.

Admittedly, some of these rely on Pidgeot getting a shield bait with Feather Dance and then closing it out with Brave Bird (though Pidgeot CAN still do quite well sticking with just Feather Dance too 👀), but the Ghosts are pretty solid wins thanks simply to that Normal typing , with no other fancy tricks required.

And note that, despite taking neutral damage from Fighters rather than resisting, it still handles (nearly) all of them fine as well, even Medicham with its scary Ice Punch/Psychic combo.

And as a reminder, all the above wins come even with lowly Air Slash, which should put to bed any questions about whether or not non-Legacy Pidgeot can be viable in PvP!

But there ARE several differences to note. Here they are:

Now, that said, Air Slash does start lagging behind a little more with shields down:

And now, let’s do the same dance in Ultra League!

In 1v1 shielding at UL level, all three Flying fast moves (again paired with Feather Dance and Brave Bird) take out the following:

And the main differences, again in 1v1 shielding first:

And finally, with shields down:

One more note before we wrap things up. I did NOT post all the results of 2v2 shielding, partly because it’s a scenario I don’t put as much stock in (it is, by far, the least common and also least helpful even-shield scenario in determining a Pokemon’s PvP relevance, in my experience), but also partly because it really tells the same story. Air Slash falls even further behind both Gust and Wing Attack… and the same is true of Ultra League (Air Slash vs Gust vs Wing Attack).

It IS worth noting that Gust is overall best in both leagues in 2v2 shielding, which makes sense considering the big fast move damage that it will deal over the course of those lengthier battles, but Wing Attack remains close and it realy comes down to a matter of preference which move you want to roll with.

In very general, perhaps even over-simplified terms: after looking everything over, I think it’s actually fair to say that Wing Attack has the slight edge in Great League, and Gust has a similarly small advantage in Ultra League.

In Great League, outracing things and busting down shields matters a little more for most teams, giving Wing Attack a little more success, whereas in Ultra League, battles tend to be more drawn out and Gust starts to pull away from the other fast moves the longer the battle goes.

But all that said, it really comes down to player preference and team composition whether Gust or Wing Attack works better for you. There is no one-size-fits-all, and really no “wrong” answer. Even Air Slash can work out fine for many teams, especially if you’re strapped for Elite TMs.

One thing is for certain: Pidgeot is indeed worthy of all the hype. Even with the slight nerf to its exclusive Feather Dance, it will still be dancing on MANY graves in this and likely many future season to come. Hallelujah!

And that’s it for today! I am still working to get a Hoopa (and friends!) analysis out ASAP, but until then, you can always find me on Twitter with near-daily PvP analysis nuggets or Patreon.

More details are announced for The Pokémon Company's upcoming...