Thoughts on Pokémon GO Plus

USER GUIDE | Submitted by Larian on January 9th 2016I haven’t seen a lot of discussion on the Pokémon Go Plus device, so I thought I would take one for the team and give my impressions of the device. First of all, not that Pokémon Go has been out for a while, I think these devices are now easier to obtain than they were back at the release. You may still have a hard time getting one in the store still.

General Impressions of the Device

It’s nothing fancy. I wouldn’t say it’s particularly well constructed, but it’s not a “lemon” (as per the US vernacular). The wrist strap is rather useless in my opinion, and probably should just be thrown away. You can carry the device in your pocket, or clip it to your shirt.

I would recommend trying to keep it as secure as possible as it is relatively small, and really doesn’t offer the best methods for securing it. Connecting it to your account is pretty easy and straightforward. It does require you have Bluetooth activated, so it is yet another draw on your battery…

Vernacular = the language or dialect spoken by the ordinary people of a country or region.

This is basically the purpose of this device. You can open up Pokémon Go, connect it to your Plus device, and then switch to another app and still catch Pokémon. The device will vibrate, and you have to press the button on it to attempt to catch the Pokémon it detects. It will also let you spin PokeStops remotely. 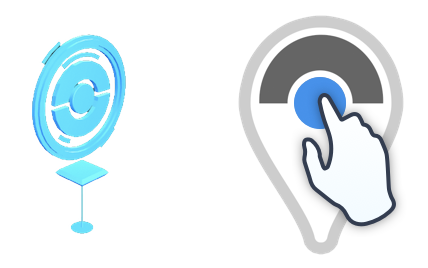 It notifies you by various vibration profiles to let you know what’s going on. A rapid series of vibrations is your clue to press the button on the device. Then it gives you a little vibration to let you know when it is attempting to catch something, and finally it gives you a specific vibration for a capture or if the Pokémon ran away. There are corresponding colours to the lights that are part of the button, but if you are not specifically paying attention to it, you may not see these. All these instructions are also written down in the small manual you get with the device.

One of the particular benefits of the device (and this is untested and unsubstantiated, so anyone else testing this would be appreciated), is that the game sometimes can’t figure out your speed. So, if you are a passenger on a bus or in a car, it may still allow you to catch Pokémon on your commute or while moving around faster than 10 kph (or whatever the real cutoff speed is).

Based on this “feature” alone I think that makes it worth it.

While the device can automate catching, it is a “dumb” device. It will just throw balls at a Pokémon and give you whatever base chance to catch it. It will not curve the balls, upgrade balls, or use Razz Berries.

And it doesn’t tell you what type of Pokémon it’s trying to catch. SO this is really just a way to vacuum up what may come while not paying attention. You may miss out on rarer captures because of these limitations. And it may use up your supply of Pokéballs faster than you would actually manually throwing them.

Is it worth it? I think so. It will allow you to sweep up some Pokémon for that all so valuable XP and Stardust while you may be required to have your full attention on something else. I wouldn’t use it all the time though, just as I said when not able to pay attention, or to take advantage of the unconfirmed feature of getting some benefit past 10 kph.