Dodging – The act of changing ones position, sometimes to avoid being hit by someone or something. In Pokémon GO, it means furiously swiping your finger to the left or the right, usually in the vain hope that you somehow manage to avoid that Kyogre’s Hydro Pump for the seventh time this raid. Alas, your Exeggutor gets knocked out before it can get off that Solar Beam.

This guide is here to help you effectively dodge an opposing Pokémons’ attacks (Kyogre or otherwise), so let’s start looking at the mechanics behind the curtain, shall we?

The text animation for when an opponent uses a charged move is located in the lower right hand corner of your device’s screen. Once this appears, KEEP ON HIGH ALERT for a yellow flash. The yellow flash is the signal for you to immediately swipe left or right to dodge. 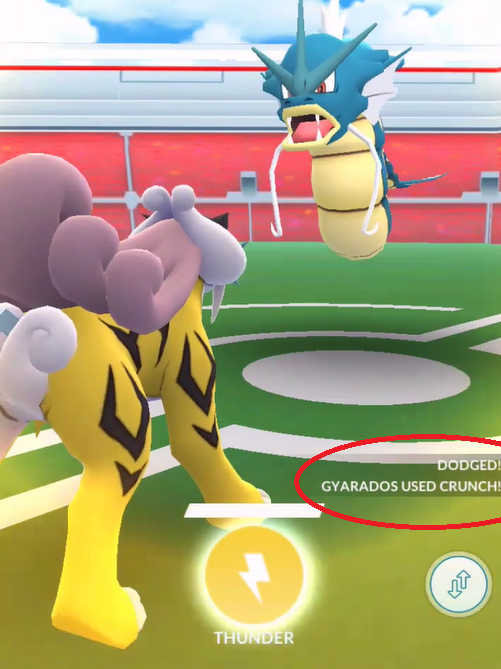 Of course, it does well to keep in mind that the time difference between when the text animation appears and when the yellow flash occurs is different for each move. A chart consisting of almost all of those specific times can be found here.

Once the text animation pops saying the opponent used a charged move, the waiting game begins. Using the chart provided by GamePress through the link above, the time between the text animation and yellow flash for Flamethrower is exactly one second. (Tip: Press ‘setting’ and then ‘speed’ to adjust the motion of the video. This will help you know exactly when to dodge.)

Keep in mind that you need to dodge BEFORE your HP bar turns orange. If it does turn orange, then there is no use in dodging a move that has already registered as a successful hit.