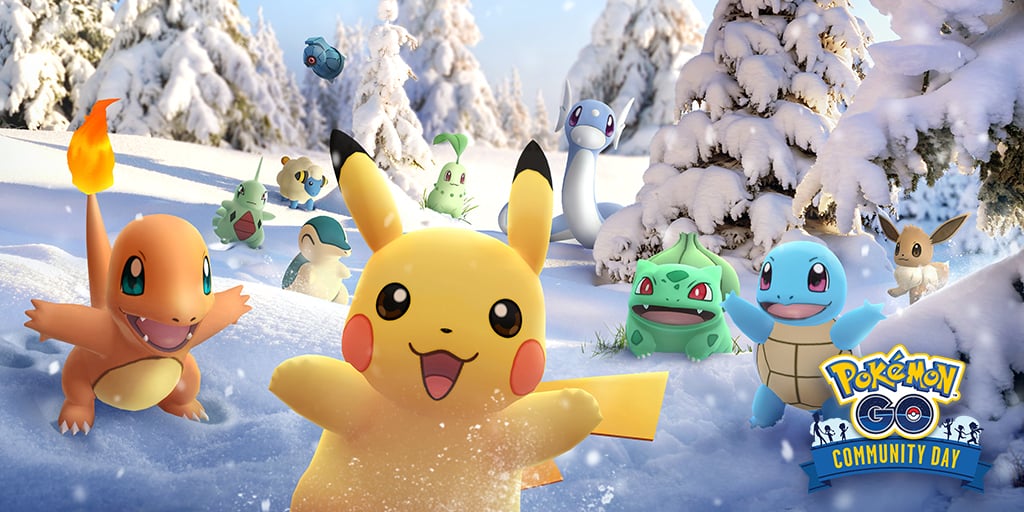 Community Day takes place every month at a specific time, and this Event Window is when all of the below features occur. Normally, this is a 3-hour window in the afternoon on a Saturday or Sunday.

The main staple of Community Day is the introduction of the shiny form of the Featured Pokémon. The new shiny becomes available at the start of the Event Window and is available even after the event ends; however, during the window the number of spawns and the shiny rate of the the Featured Pokémon are greatly increased. Research points to the shiny rate being increased by a factor of 15! The current trend is that every other month the new shiny is a Starter Pokémon, being released in the order of the Pokédex.

The other major fixture of Community Day is the release of an Exclusive move for the Featured Pokémon’s family. Typically this move is learned by the final evolution, is powerful, and experiences STAB. The Featured Move is ONLY available from evolving during the Event Window, it can not be learned from TM or a second Charge Move. The Featured Move is guaranteed with every evolution, during the window. In a welcome charge since the first Community Day the Exclusive Move Event Window lasts 1 hour longer than the increased spawn rates.

One trend that has been observed is that the Starter Pokémon get the same Exclusive Moves, dependent on Type.

Another element of Community Day is the additional bonuses. These have included Stardust, XP, or Candy multipliers, reduced Egg hatch distances, or increased lure duration.

It has become commonplace that each Community Day a special Event Box is available for purchase. This box typically complaints the Additional Bonuses in effect during Community Day.

To get the best out of Community Day here are some general Tips and Tricks for a successful event.

Before Community Day starts, every trainer should do some preparing. The two most important, in-game preparations are: Clearing Box Space and Having Ample Items. First, it is important to clear up some space in your Pokébox. The more space cleared out, the less transferring that has to be done on the spot during the event. It’s always a major drag when you get the dreaded “No More Space” message.

Next, it is important to ensure you have enough items to last through the event. This means enough Pokéballs and Berries to catch with. Obviously, you can still spin Stops and complete Task during the event, but there is another worse than finding a shiny and having no Pokéballs to catch it with.

In addition to items for catching – make sure you have all the Lucky Eggs, Starpieces, Incense, Lures and Incubators that you plan to use. These items definitely can compliment the additional bonuses, and keep in mind the added bonuses as you might not need six of each to last all event. These items can often be found in the Event Box, so be smart about what you need and plan to use.

Here are a few other minor preparations that can come in handy. It can be helpful to look up and print charts of the 100% IV Pokémon for the event (although this has become less relevant since the introduction of the 4* search feature), as well as CP ranges that will fall closest, but under 1500 and 2500 when evolved. If you’ve saved any High IV or CP Pokémon to evolve for the Exclusive Move, mark them. Also feel free to trade before the event, this can get you a Lucky Pokémon and always gives Candy. Some people like to preset an alarm to go off every 30 minutes as a reminder to reapply Lucky Eggs, Star Pieces, and or Incense. If you don’t want your Go Plus or Pokéball to catch during the event, remember to turn that feature off.

Most important is have a day of Game Plan. Know where you are going, what to do if there is inclement weather, are there restrooms available, etc. Decide if you plan to walk or ride (Please Please NEVER play Pokémon Go and drive). Pack all your supplies: batteries, charging cords, snacks, rain gear, sunscreen, water, etc. Lastly, charge your devices!

You’ve made it to Community Day! Here are a few tips for making the most of the three hours. Get there early, so you are in place to start. Once the event starts activate any Lucky Eggs, Starpieces, and/or Incense. Don’t drop lures before the event starts; some evidence points to lures activated pre-event severely under-perform. If the sprites of the featured Pokémon don’t appear, or fully load, when the event starts restart your app. Now it’s time to start catching. Some trainers like to Quick Catch – this is a trick that allows you to skip the Catch Animation. It is highly recommended to catch everything, this will result in tons of Candy, plus it is easy to forget which Pokémon have already been Shiny Checked. As the event nears its end, last 5-10 minutes, Shiny Checking can definitely trump catching.

Remember to keep an eye on any Incubators, Lucky Eggs, Starpieces, and/or Incense – you’d hate to miss out. Make sure you spin stops and complete the tasks, it’s easy to run out of supplies during the event. Additionally, monitor your Box and Bag, both can easily fill and it’s never nice getting surprised by an Full Box/Bag Warning Message. The best way to clear your Pokébox during the event is to search ‘0*, 1*, 2*’ and transfer everything that shows up, because they have lower IVs. Be careful doing this if you are after some specific IV combinations for PVP.

Even after the spawns and bonuses end, you can still obtain the Exclusive Move for 1 Hour after Community Day. Use this hour to appraise, trade and evolve. Type ‘3*,4*’ in the box search bar to weed out some of the better IV Pokémon you caught during the event, they will most likely be the ones that you want to keep.

Remember trading away all your excess Pokémon instead of just transferring them gets you an extra Candy. Plus there is always the change for a Lucky Pokémon. Once you’ve appraised traded, and transferred your Pokémon, it is time to evolve and get the Exclusive Move. Remember you only have an hour, and the move is usually pretty good. Also, it easy to TM away an exclusive move after the fact, but not possible to get an Exclusive Move again. (December 2018 say an extended Community Day featuring all 11 previous Pokémon and allowed access to their Exclusive Move again. While it is likely to happen again, DO NOT bank on this.)