S2 cells are a fundamental part of Pokémon GO’s game design and interaction. Pokemon Go, like Ingress, uses S2 cells to divide the surface area of the Earth into regions of flexible size. In this beginners guide we’ll explain two things in a simplistic and easy to understand style:

After reading this guide, you should be fully capable of understanding and exploring the magical world of S2 cells in your local area.

What are S2 cells?

S2 cells are developer-friendly geographical markers used to map the Earth’ surface. S2 cells were invented at Google and are extensively used on Google Maps to perform quick geographical indexes and queries. The name “S2” is derived from the mathematical notation for the unit sphere, S².

S2 cells come in different sizes (levels) and regions they cover. Here’s how they look like:

S2 cells are not a concept you will usually find in high school or university level geography, but they are well known among the software developer community, mostly due to an incredible open source library published by Google: S2 Geometry library.

The S2 library provides many useful features for developers (a full list is available here):

The majority of Pokémon GO’s Pokémon behaviour (including spawns, nests, catch locations…) is based around different sizes of S2 cells. In the next section we’ll see which Pokémon GO features are connected to S2 cells.

Different sizes of S2 cells are used for different features in Pokémon GO. The following table is an overview of known S2 cell usages. Remember, S2 level is “essentially” the same thing as “size”. Don’t worry, we go into more details (with pictures) about specific levels under the table.

Level 6 usage was discovered by two redditors (username337 and Dot1Four) on their observations and expeditions to the real world. Username337 found the exact line in China which is used to separate the Pokémon world from the rest of China. That line is now known as the DPZ (De-Pokemonized Zone) and looks like this:

Level 20 cells are used to generate Pokémon spawns. A Pokémon can only spawn in the center of a Level 20 S2 cell, as visualized on the picture below. The picture was made by overlaying the S20 mesh over the in-game map. Similarly, Egg hatch location is determined by a L20 cell. 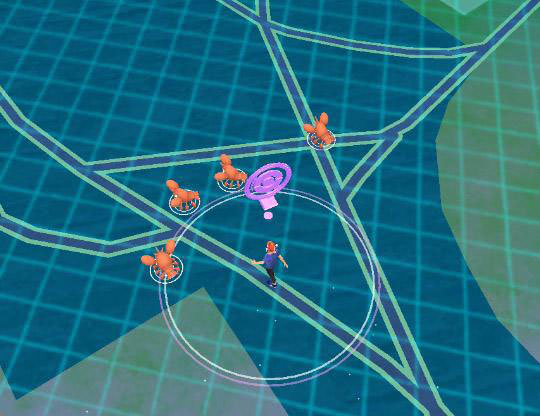