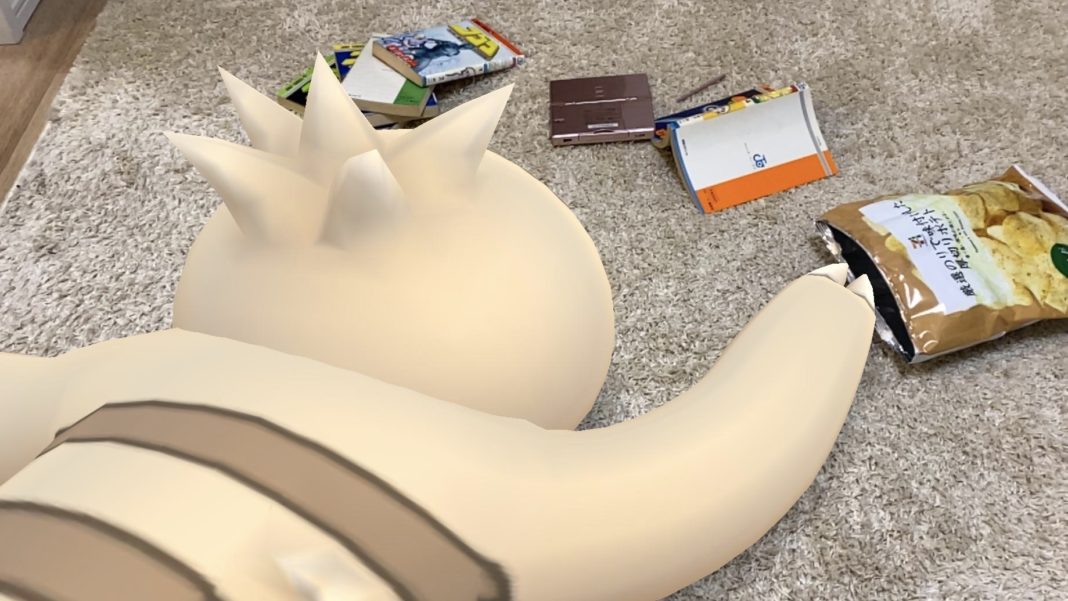 This month’s AR feature is a little different. With large amounts of the world in varying states of lockdown, and with restrictions on travel, many of our usual AR locations and concepts may be off limits. In this spirit, we challenged our amazing AR community to see what they could come up with using their available indoor locations only! While most AR photography is typically done outside, there are AR photographers out there who absolutely excel in indoor settings, particularly in the Japanese community.

I want to give a particular shout out to the incredible Risokichi whose indoor AR photography was the major inspiration behind this month’s chosen theme. Their AR photography focuses mostly on their own home and they tell some wonderful stories with their work. Be sure to check out their hilarious AR videos too!

Imagine my delight when the very person who inspired our theme submitted some of their amazing photographs! I had to give them their own section to show off their work.

‘Machamp taking a shower’ by risokichi. 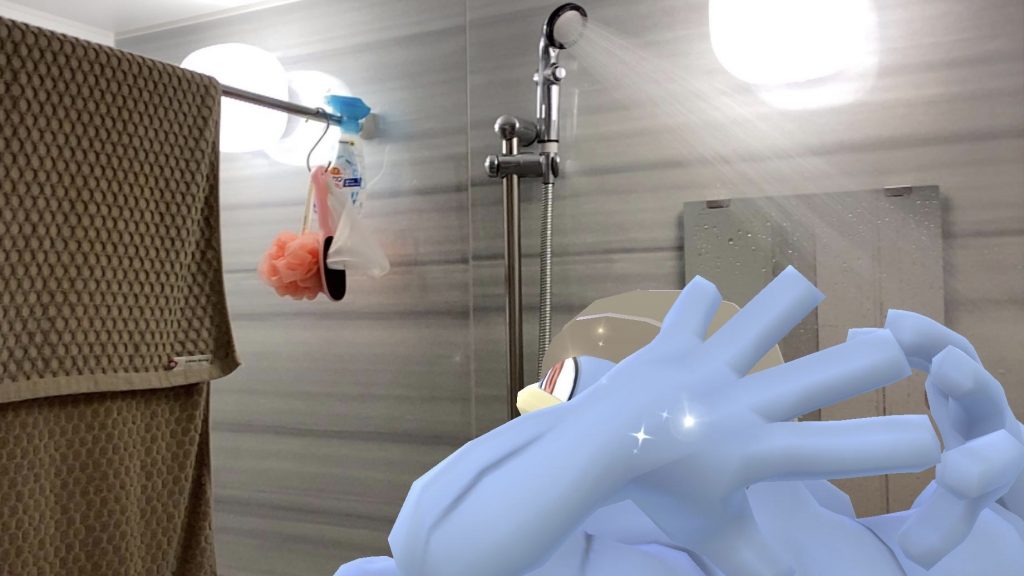 ‘After you go shopping, wash your hands and gargle. Taking a shower is also great. It’s super effective!!’

‘I relaxed at home today’ by risokichi. 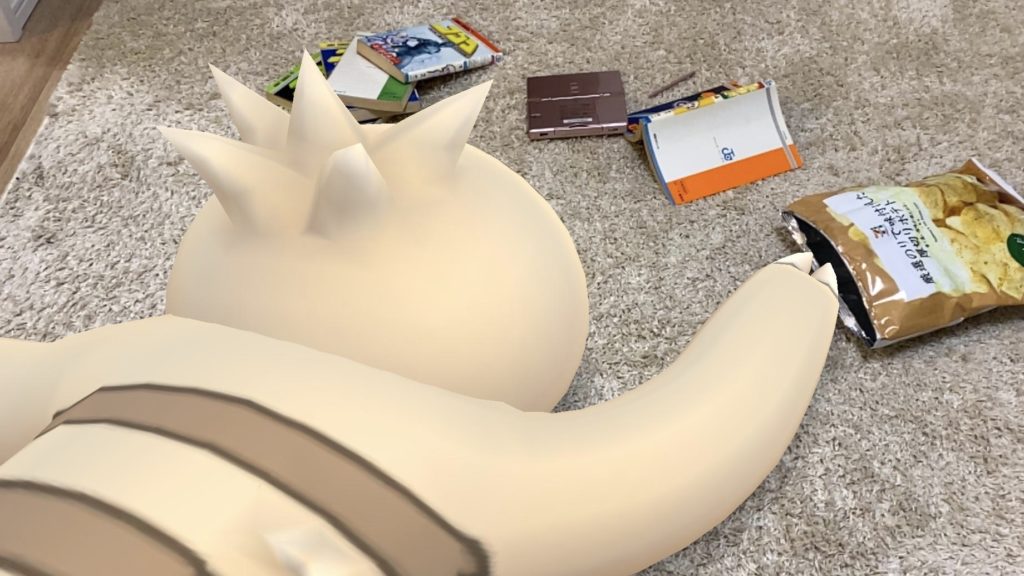 ‘He does nothing but read comics. But that’s great now. Let’s spend time at home now. For world peace.’

‘Munching Through The Quarantine’ by PeloPoGO, Mexico, Home Sweet Home.

‘With all this free time on our hands, we’ve decided to improve our cooking skills. Quarantine kitchen is booming and so is Munchlax’s appetite. It loves eating everything we come up with.’ 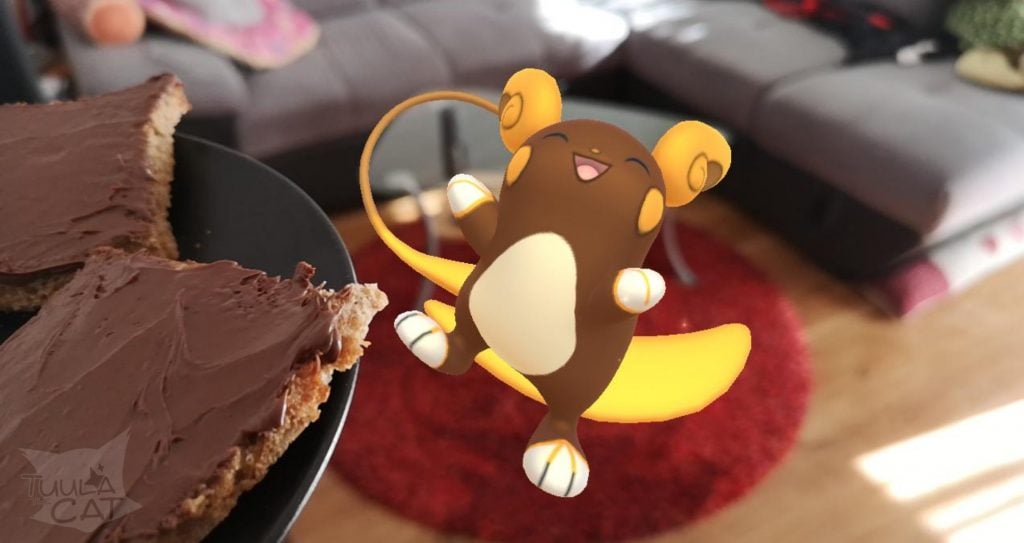 ‘Breakfast is considered the most important meal of the day. My buddy alolan Raichu called Nutellabrot (engl. Nutellabread) agrees. Don’t be confused she’s a shiny she did not eat too much of the hazelnut chocolate cream! This picture is completely unedited because I liked it that way. The Pokémon would blend in better if I blurred it so that it’s clear it’s sitting on my carpet waiting for breakfast. But for some reason I like it that way!’

‘Waiting at the end of the tunnel.’ by Mysysyfypy, Leticia, Colombia – Amazon river. 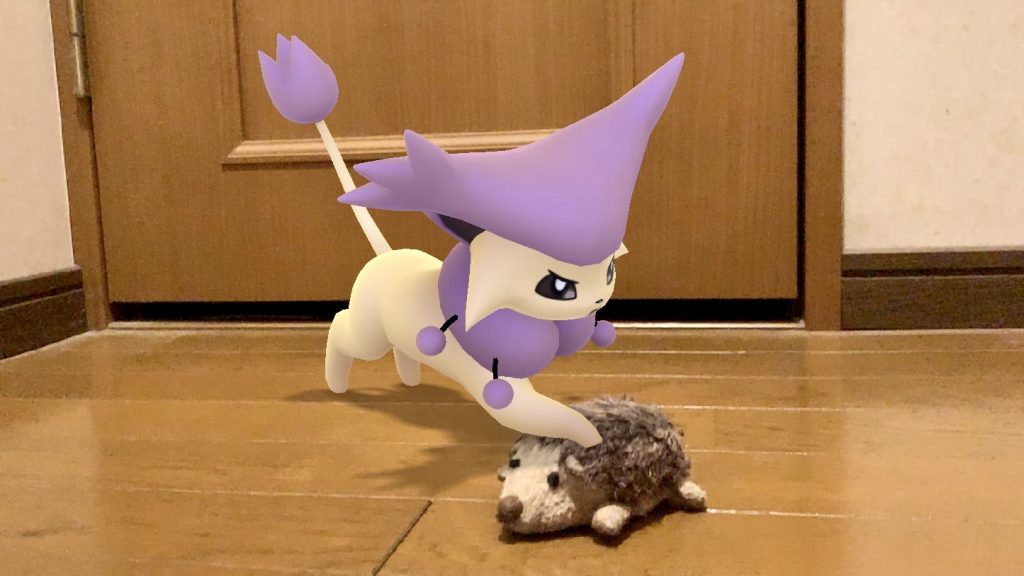 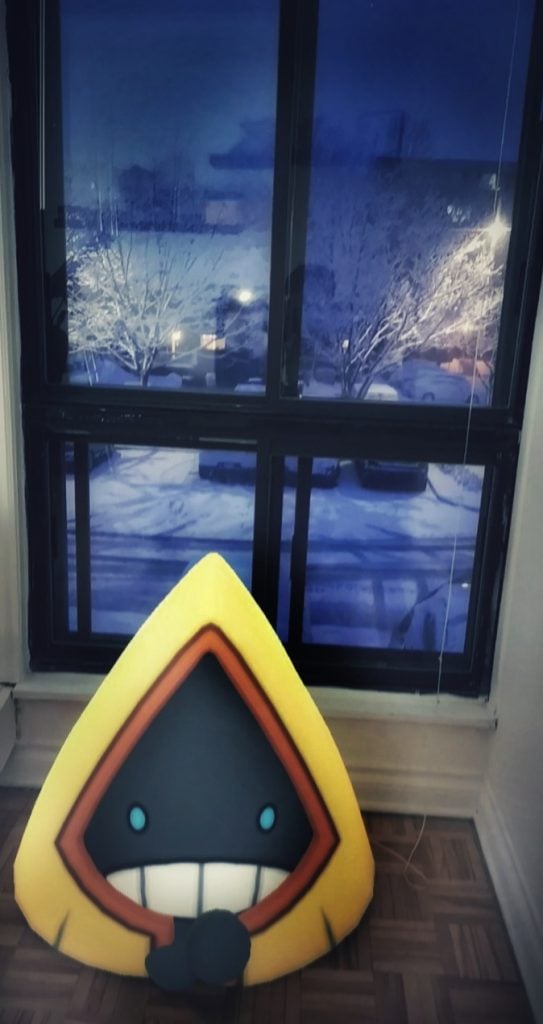 ‘It was a chilly evening and I was cuddling with my buddy Snorunt. Suddenly, he jumped off my bed posed in front of the window. I understood he wanted to have his picture taken and quickly took one.’

‘With being indoors, I tend to watch a bit more of the Pokémon Anime Series and the battle scenes are some of most intriguing Showcases, so in a way to keep the creativity of GoSnapShot alive, I turned off the lights in my room, used my iPad as a battle platform & with Pokémon Go’s AR+ feature, bringing out Pokémon like Charizard to “ Theoretically Do battle” I would be extremely pleased to see this as a Pokémon Go update sometime in the coming years’

‘Taillow disturbing Budgies in their cage.’ by Rhanique, The Netherlands. 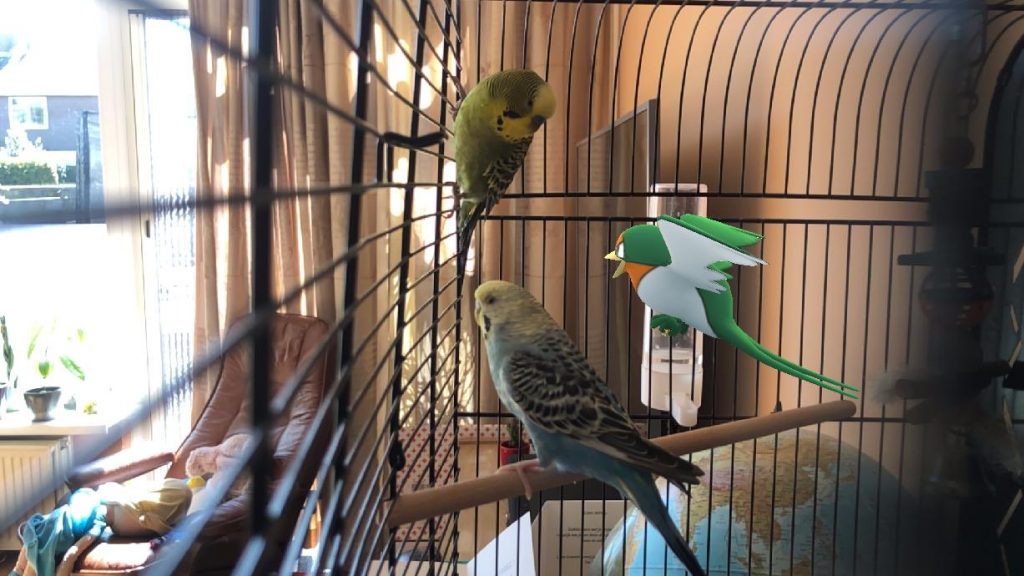 This was a combination of creating something for #trashpkmnweek (hosted by Toto_le om Instagram) and the idea of including our birds in a AR-picture. I wanted a picture of them because these days are strange for them as well. Normally the both of them our home alone by themselves a lot. Nowadays there is almost always one of us in our living room with them. When I learned how to apply the tiny pokemon trick, explained by Kittypokemonsalot, I knew how to make the shot. It turned out great!

‘Leave the lights on’ by TuulatheCat, Nuremberg, Germany. 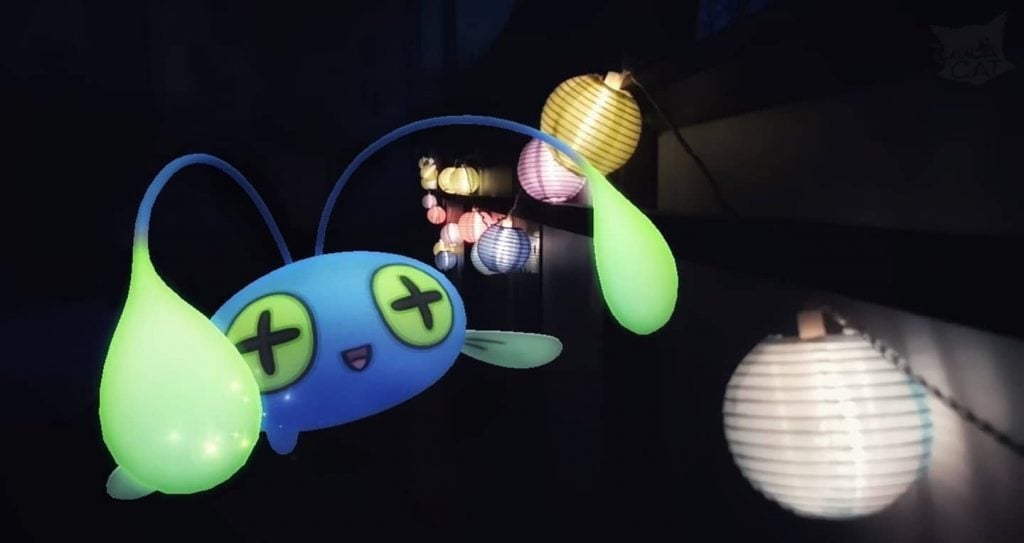 ‘Now originally this photo should be taken in Liverpool UK. But for obvious reasons the Safari Zone got postponed and we played at home. This picture was taken on my Balcony at night after the end of my safari day. While my shiny haul was decent I missed the actual social interaction of an event like that. However Chinchou didn’t want me to be sad so we switched on the little lanterns and enjoyed the mild spring night.’ 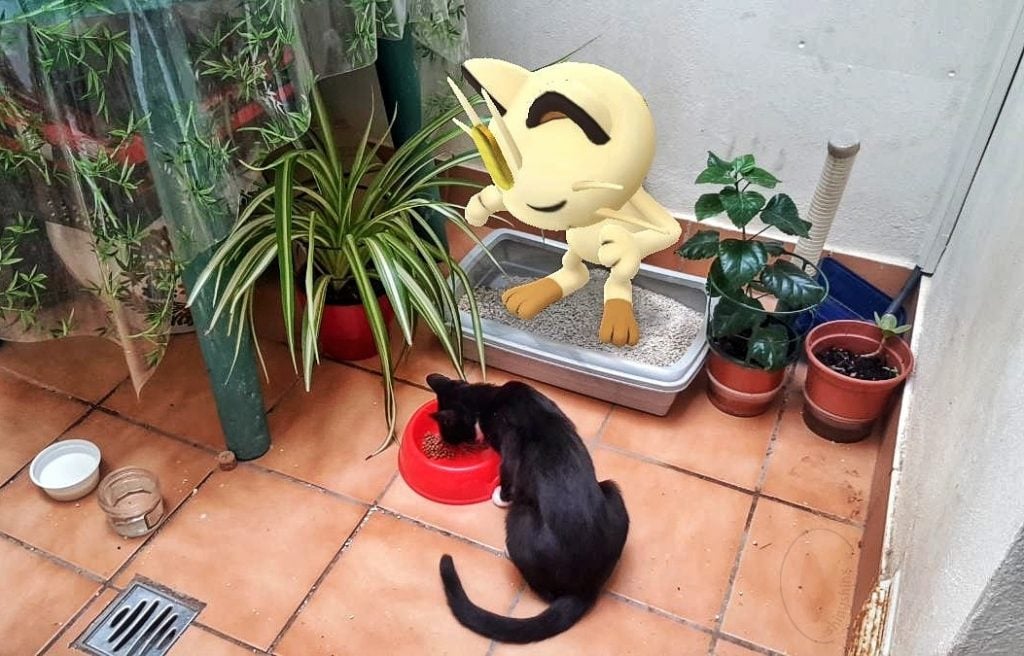 ‘I might be detecting some sort of cat hierarchy here. There have been social classes since… always? Wait that’s not true. Before Neolithic era, humans were hunter-gatherers that moved through land as nomads. However, once we discovered farming and agriculture (around 12,000 years ago) we became sedentary and started owning and defending land. Then approximately 6,000 years ago, it started to be a distinction between peasants and nobles and an association with the latter and war. And ever since, there have been social levels. Sedentarism was a tough move for most of us!’

‘Klang in the Hat’ by Espeon_Willow, Melbourne, Australia. 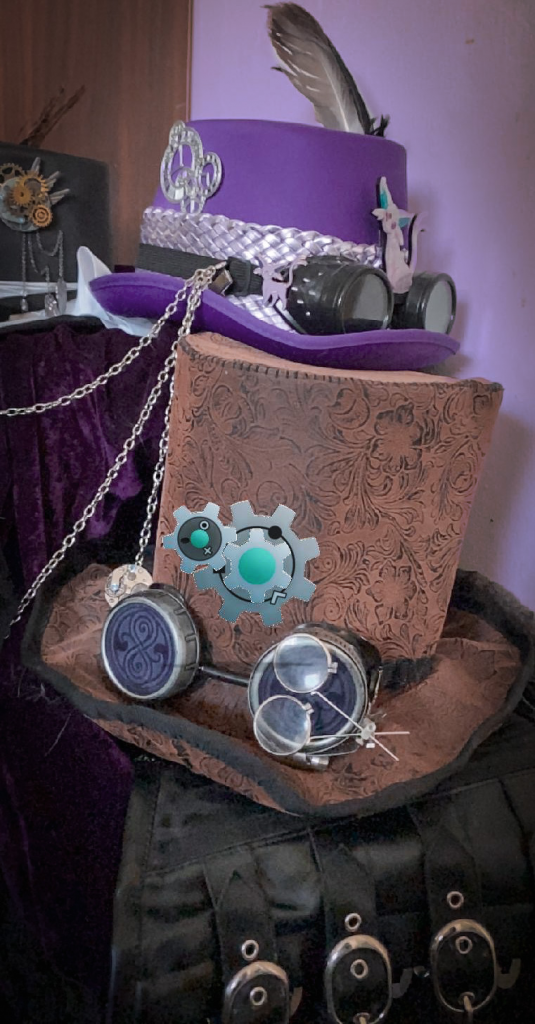 ‘Something seemed different about my costume hats the other day. On closer inspection, I spotted a Klang making himself at home on one of the hats. I left him to settle down with the other cogs! [ One of my other hobbies is Steampunk costuming. I have always thought that the Klink evolution family (Klink/Klang/Klinklang) would be perfect as Steampunk accessories as cogs and gears are prominently featured in Steampunk. ]’ 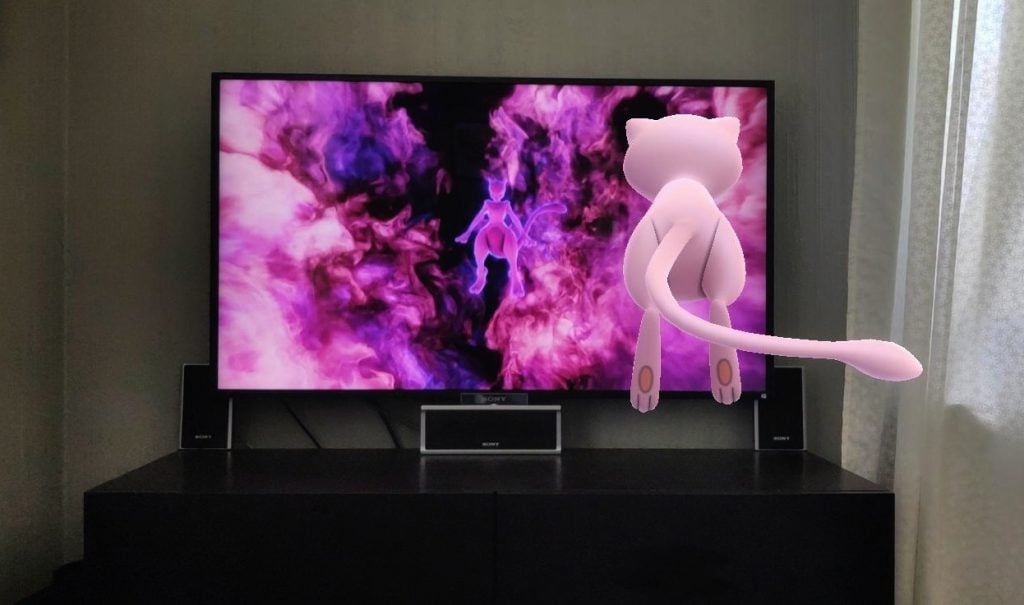 ‘This little sweetie came to join us when we had movetime this week. Usually you can hear much “move away from the tv” “I cannot see anything” in our house but this day no-one complained even if we saw just half the tv. We were just sitting in the sofa and our eyes was more focused on Mew than Mewtwo.’

‘A Mythical Discovery at Home’ by Ash Ketzchup, Belgium.

‘I know this is an older photo, which I also used for the Niantic GOsnapshot challenge last year. But, to me this is a great example of what you can do with GOsnapshot at home! Try out some new techniques, for example a Shadowmon, where you only try to photograph the shadow of the Pokémon! This technique works best with Pokémon who fly. Tag me on socials when you end up photographing a Shadowmon at home, good luck!’

For our next showcase we are looking for images that contain tiny Pokémon! Submit your entries here until 15th June. All rules can be found in the submission form, we can’t wait to see what you come up with next! If you aren’t sure how to trick your Pokémon into being tiny in AR+, here is a guide to help you.

Don’t forget to use our hashtag #GOHubAR when sharing your AR photographs on social media!