Raids have been out for almost 2 years, yet the time frames in which raid eggs spawn haven’t changed much. We can all agree that an extension of an hour or two into the evening would be a great way to get more “late” raids in. Let’s look at the current situation now and then discuss why an extension of time would be a great idea for raids going forward.

When you first wake up at and travel to work, school, etc… you can often find your favorite raid spots littered with colored eggs at 6 am. Sure some people may start raiding that early, and that’s fine, BUT why do so many raids pop up first thing in the morning?! 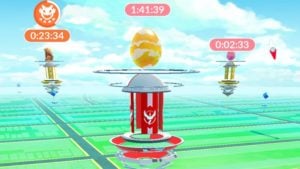 *Raids in the morning

This always left me scratching my head. Especially when most people have school, work, or other priorities through the work week. If we flip the scenarios and look at the evening raids, I’m still left relatively confused. Very few raids, if none at all, are available after 7 pm (here in the US). 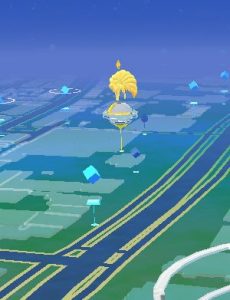 A time where most people are off work and available to do a raid or two before they settle in for the night. Strangely enough, other parts of the world have later raid timers. In Japan, you can find raids after 8 pm. In Europe, I’ve heard as late as 9 pm. Yet, it is not like raiding through the workday was an option anyways. Of course, by the weekend it is fine, and almost everyone can enjoy a raid at any time during the day (except those who work weekends like me, but that’s okay). So what gives? Why do raids start so early, yet END so early at night? Perhaps there should be a more balanced approach.

So as mentioned above, other parts of the world have later raid timers. Still, I believe ALL raids should stop spawning after 9 pm (local time). This would allow for some potential raids even after 9 pm. Why that specific time? Glad you asked! Here in the US, the average time that public parks close is 10 pm (give or take an hour). I mention this because perhaps this is Niantic’s primary concern. The possibility of illegal loitering on public grounds after hours. Now, of course, it wouldn’t be Niantic’s fault if someone decided to do this, but I can see why this can be a potential issue.

Here is a list of benefits later raids would provide:

Weather can hinder raids during the day. Hazardous thunderstorms, snow, or even heat can completely falter your raiding chances. However with later raids, the storm could have passed, the snowy roads plowed or the heat has subsided from earlier. Overall, allowing people to hit raids at a later time in the day effectively and safely.

Changes Niantic Has Made That Hint Raid Changes

Niantic has already made changes to Community Day times. As of now, it runs from 3 pm to 6 pm local time. Key phrase – local time! If Niantic can make raid eggs spawn in each respective region’s local time every day, that could give us an extra hour right off the bat (think Japan raids until 8 pm)! An extra hour is better than nothing.

Another thing Niantic has implemented is the coveted Legendary Dinner hour. Starting at 6 pm local time, all gyms (almost all) have legendary raids on them. It is as if Niantic already KNOWS they need to increase more raids into the evening hours. Let’s hope they continue to improve raids later into the night. 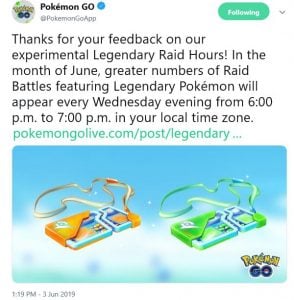 Without a doubt, an extension of raid timers into the night for a couple of hours would be a godsend. This would encourage even more community interaction, as more people would be available through the work week. Even on the weekend’s, this would generate more raid chances. One can’t argue that this would bring more revenue to Niantic as well. Overall, it is a win-win. I’m curious about what you guys think. Should Niantic extend raid times? If so, what benefits the community most from the extension? If not. Why?