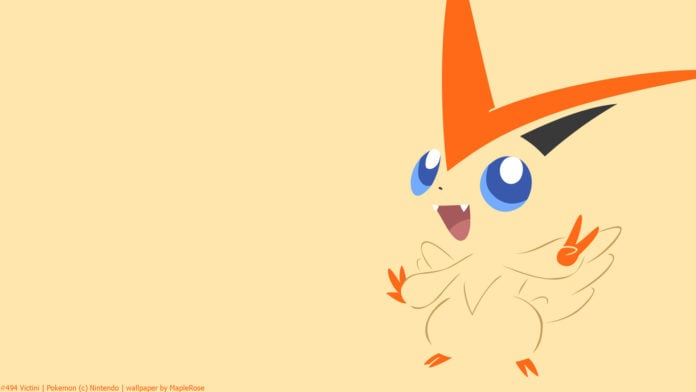 Hello again Trainers!  When Generation 5 dropped into Pokémon Go eagle-eyed trainers noticed that the first entry in the Unova portion of the Pokémon Go Pokédex wasn’t a starter Pokémon.  For anybody who didn’t play Pokémon Black or White, this may seem very odd.

While it is true that Snivy, the grass starter in Unova, is Pokédex entry #1 in the Regional Pokédex, it isn’t the first Pokémon in the dex.  That honour was given to Victini.  The question is, why?

Victini is said to bring victory to the trainer that earns its trust.

Its physical appearance seems to be based on a Japanese technique of cutting apples into rabbit shapes called usagi-ringo.  Its appearance could have been inspired by the Greek god of victory Nike or Victoria, Nike’s Roman equivalent.  The V on its head could be linked to it being from the fifth Generation, or it could be a reference to the V sign for Victory.

As for why Victini was given a spot before Snivy, in the main series games Pokémon Black and Pokémon White you could only catch Victini during a special event.  You had to travel to a place called Liberty Garden and fight your way through some Team Plasma grunts before you could encounter and catch Victini.

Afterwards, when you walk back outside you are greeted by Professor Juniper who says:

From a lore perspective, it’s clear that Victini has a special place in the Unova Pokédex and to the lore of Unova in general.  Thus, it was given a special place at the beginning of the Pokédex to aid all those that travelled the region with a Pokédex.  Victini has uniqueness within the lore of Pokémon as a good luck symbol, as well as it being a symbolic mascot of victory.

There are many speculations as to why this was done from a practical perspective, as it seems odd that Victini is the only Pokémon to be given this special treatment.  While the officials who created Victini have never officially stated why Victini was placed at the beginning of the Unova dex, there are plenty of theories.

Whatever the reason, Victini has a special place in the history of Unova and the entire Pokémon world.  For now, we don’t know how long it will be until Victini is released into Pokémon Go so their Pokédex entry will remain a blank space Pokémon Go Pokédex.

Victini is available now through the special research, The Road to Victory!  So go out there and work with Professor Willow so you can catch your very own Victini!

Thanks for reading, and as always, stay safe out there!