In Part 1 of this article, we laid out some of the major problems with Trainer Battles which, we believe, are causing the vast majority of Trainers to be disinclined to take part in organized Tournaments.

We then proposed a solution in the form of Gym-based Tournaments, which addressed most of those problems and in a survey linked at the bottom of that article, 1400 of you answered some questions for us. Your answers seemed to confirm more-or-less what we expected; Trainer Battles in Pokémon GO need some major changes.

Let’s discuss how people responded to the questions in our survey and see if we can draw some safe conclusions on how Niantic could improve PvP:

How often do you currently enjoy taking part in Trainer Battles, either casually or as part of a tournament? 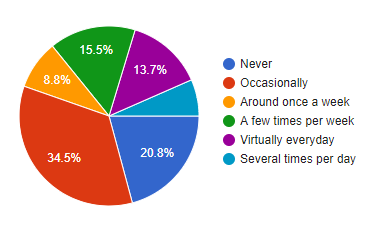 The most common answer to this question was “Occasionally,” with the second most common answer being “Never.” With a combined total of 55% for these two answers, this goes to show that the majority of players have little to no interest in what the current PvP system has to offer.

Would the Gym-based PvP system detailed in [Part 1 of] the article persuade you to take more of an interest in Trainer Battles than you currently do?

Over 40% of respondents said that they already enjoy taking part in PvP and think a Gym-based tournament system would increase their interest even further. 32% said they don’t currently enjoy PvP but also liked the sound of our proposed system. Around 27% of people said they would be unlikely to take part in the Gym-based system, regardless of whether they enjoy the current system or not.

Which five rewards would encourage you to take part in Gym-based tournaments the most?

With exclusive Pokémon encounters being the top prize for winning a Tier 5 Raid, the same would predictably be a safe bet for persuading people to get involved with PvP. There doesn’t seem to be a logical way to introduce encounters into the current PvP system, so in the meantime, it seems that more Stardust, Incubators, more Rare Candy or even Raid Passes would persuade a good proportion of players to start getting involved.

If in-game Tournaments were introduced, should they give equal/similar rewards to everyone that takes part, or should winners get better rewards?

Most people (Over 59%) said that rewards should get better the further you progress in a tournament with the best rewards reserved for the overall winner.

The fewest votes went to giving equal / very similar rewards to everyone, including the overall winner. Presumably, this is because people want more incentive to work hard at becoming the best. Ideally, the ability to gain the best rewards, like exclusive encounters, would trickle down to the less established players after a certain period of time as potential rewards for simply taking part. Once they’re more established and better able to compete with the top Trainers in their group, they can try to be one of the first to get the top prize.

Would 1on1 NPC (non-player character) battles around Gyms, as described in [Part 1 of] the article, encourage you to take more/ even more interest in PvP? 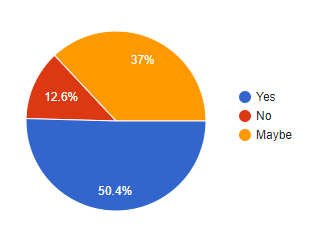 Just over half of all respondents said that NPC battles would encourage them to take more interest in PvP. Around 49% said they either weren’t sure or that they definitely wouldn’t be interested.

Does the Stardust cost of building strong PvP teams make you reluctant to get involved / sometimes restrict how much you can continue to be involved? 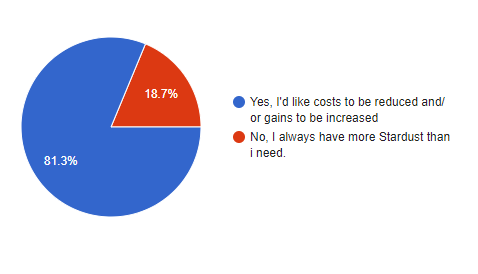 As the most definitive response in this survey, 81% of players said that they need more Stardust if they’re going to be able to take part in PvP battles. Less-hardcore players can’t amass enough Stardust to both Power Up Raid Boss counters and Power Up strong Trainer Battle teams.

If Stardust gains are going to continue as they are, most Trainers will continue to be forced to choose whichever battle feature offers the best incentives, and use their stardust to take part in that one.

What aspect of PvP do you dislike the most?

With 402 votes, one of our perceptions seems to be confirmed; The rewards for Trainer Battles aren’t good enough to satisfy players.

The extra Stardust costs, which got the second most votes, could easily be rectified by giving significantly more Stardust as rewards for taking part in Trainer Battles, thus killing two birds with one stone.

Once the rewards are up to scratch, they would hopefully give an adequate incentive for Veteran Trainers who favor the turn-based battle system of the main-series Pokémon games, to adopt the new real-time battle mechanics of Pokémon Go.

What aspect of PvP do you like the most?

One thing that attracts some people to the idea of PvP, is that we finally get some diversity in the Pokémon that can help us succeed in battle! The last time the field was this diverse and strategic, we still had Gym Training (those were the days…).

We notice that the second most popular choice in this vote was “I don’t currently like any aspect of PvP”; Another clear message from the players.

Popular Answers from “What else do you enjoy, or think could be improved, regarding PvP in Pokémon Go?“

Here are some additional thoughts and suggestions from respondents:

From the survey responses we’ve laid out above, it’s clear that many new aspects and mechanics could be implemented into Trainer Battles to get players to engage with the feature more. The first and most crucial step that we’ve established would be to increase the variation and quantity of rare items gained by taking part in Battles.

I have also been able to refine my Gym-based Tournaments idea further, by implementing some of your excellent suggestions:

Trainers can get one free “Tournament Pass” per day, plus other items, by battling low-level NPCs (non-player characters) that can spawn anywhere on the map, but most commonly around Gyms. Extra Passes can be bought from the in-game Shop.

Themed tournaments with certain restrictions on types and a pre-determined League, appear on Gyms just like Raids do and within a set time window, Trainers can meet to compete (a minimum of 4 and up to a maximum of 16 Trainers per lobby).

Everyone uses their Tournament Pass to enter the lobby, chooses their team of three, and are then auto-matched with another Trainer.

Everyone battles the Trainer they’ve been matched with. The winner of each one progresses to the next round to be re-matched, while the defeated Trainers are eliminated.

Each battle awards Stardust, XP, rare items and gives a Pokémon encounter to the eliminated Trainer, but the further you progress before being eliminated, the better the rewards and rarer the encounters become.

Each winner gets item rewards, but is also guaranteed to encounter the current ‘Trainer Battle Exclusive’ Pokémon. This could be a new shiny Pokémon, a shiny Legendary, a Pokémon with a legacy/ exclusive move, or maybe even a brand new Legendary!

The more matches you won before being eliminated, the more Premier Balls you will be awarded with which to try and catch the exclusive Pokémon. The overall winner’s exclusive Pokémon will have a 100% catch rate as a reward for their victory!

After that month, and depending what it is, the exclusive Pokémon becomes available via other means like Raids, Eggs, Research, or maybe even in the wild, to give everyone who didn’t get one, a chance to catch it.

The overall Tournament winner also becomes the Leader of that Gym, and can then:

Trainer battles as we know them now would still exist for third-party tournaments and casual battling/ practicing/ testing out squads against friends, Team Leaders or other NPCs.

While this series of articles has indeed been a critique of the current Trainer Battles system, we don’t for a second expect that Niantic doesn’t have big plans for how they’re going to expand the feature in the future. They did, of course, gain funding from Axiomatic Gaming, who specializes in facilitating esports and competitive gaming, in January 2019.

This partnership will undoubtedly lead to much bigger things for PvP in Pokémon Go like AR Tournaments where esports spectators can see the battle in real time either through their phone screens or through a piece of wearable technology.