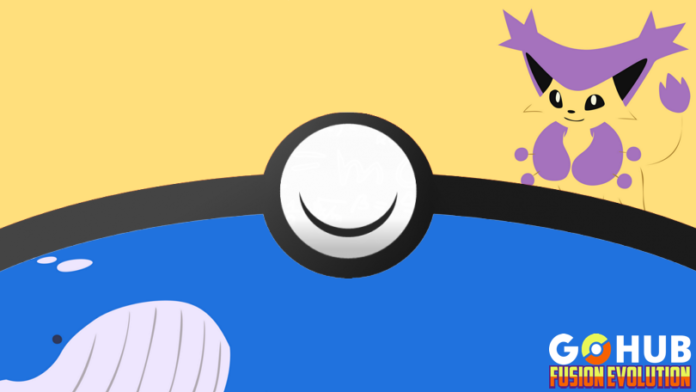 Welcome Trainers, to the second article in the fan-art that is the Pokemon GO Fusiondex, in conjunction with the talented team over at Fusion Evolution.

For a history of how fusion in the Pokémon Universe was born, please refer to my foundation article; or the first entry in the Fusiondex, Venustoise.

This months entry to the Fusiondex is recommended by Reviloja, senior member of the Fusion Evolution Team.

Wailcatty, amusing as its concept sounds, is not all that good in the regular Fusion Evolution metagame. As a defensive fusion, it fails due to a mediocre typing, and, much more importantly, an ability that is essentially useless, giving it an immunity to Normal-type moves. However, I decided to pick Wailcatty for this month due to the fact that the mere concept of this fusion is some of the funniest in the Fusiondex. I’m rather curious as to how well Wailcatty would do in a Pokemon Go setting as opposed to the main series.

Pokémon GO Wailcatty is a dual typed Normal and Water type Pokémon. It is a blend of the Generation 3 Pokémon, Wailord and Delcatty. This type combination is only found with one other Pokémon, Bibarel, introduced in Generation 4.

Within the Fusion Evolution database, this gargantuan kitten would evolve from the Fusion Merkitty, a merger of the Ball Whale Pokémon Wailmer and the Kitten Pokémon Skitty. As they do not share the same Egg Group this would be a DNA Fusion (see foundation article for details)

In Pokemon GO, I would suggest it would be obtained by evolving a Wailmer with 400 Skitty candy (or vice versa).

In this chart, we will look at Wailcatty’s stats compared to some of the other prominent Water and Normal types in the game, across all released generations in the main series.

The amount of Pokémon that bridge these two types is significant, in total 245 across the 7 released generations, at time of writing. Our oversized catfish comes in at #59, which is not too shabby given both Water and Normal have some of the strongest Pokémon available.

Wailcatty’s stats are middle of the pack, while it would not rank in the current meta the fusion does improve upon Wailord’s abysmal defense stat, although as it takes super effective damage from common gym attacker types, it doesn’t help much.

Below is a list of all the moves Wailord and Delcatty have access to:
I have not included any Exclusive Moves from Community Days.

If/when abilities are introduced into Pokémon Go, Wailcatty would have access to a Fusion Ability, which would be a combination of the abilities available to its constitutional parts.

The ability which is allocated within the Fusion Evolution Database is called Normal Veil, which is a fusion of Normalize and Water Absorb

With weaknesses to three different moves types, Wailcatty has to take into account of the weather. In weather that has pros, use Venustoise all you want and let it tear through its enemies, but in the weather with cons, avoid using it against foes that may have super-effective moves.

Well, no. As much as I would enjoy the puzzle of forming each possible Fusion, in either Pokémon GO or the main series, we have to be realistic that everything conceptualists do is considered as Fan-art. While its an acceptable and often fun medium it will unfortunately never make it into Pokémon GO.

A huge thank you to Reviloja and the team at Fusion Evolution for helping me with this conceptual entry into the Pokémon GO Fusion database.