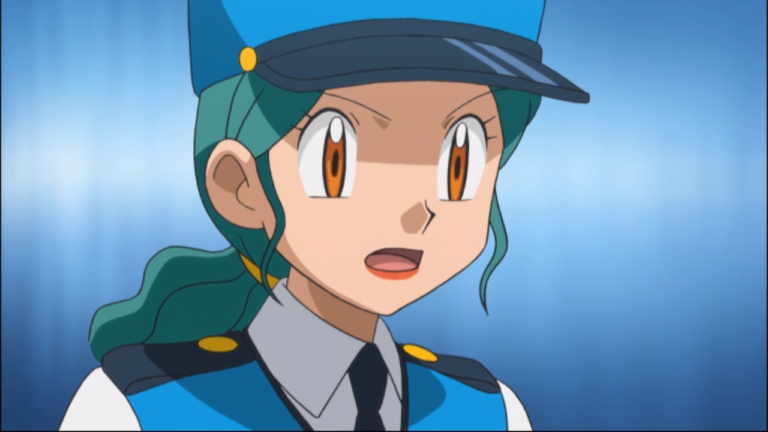 Officer Jenny has been a constant presence in the stories, anime and movies, but she has rarely ever appeared in the video games. At the time of writing, the only appearance was in Pokemon Yellow, published in 1998. The brief encounter occurs in Cerulean City where she replaces the male officer seen in Pokemon Red and Blue. Even in the 2018 released game, Detective Pikachu, a game which would be ideal for her, Jenny is missing.

However, despite a lack of in-game appearances, she has appeared as a consistent reoccurring character in other media formats. Officer Jenny uses a variety of Pokemon but often favouring dogs such as Growlithe, Manectric and Herdier.

Within Pokemon Go, we have an opportunity to bring this character to the foreground and offer her the dedicated mechanism she has been patiently waiting over 20 years for.

In this article, I am going to delve into my third concept for improving on the single player (and community) experience.

The event begins with a micro-story. This is a four-part story in which Officer Jenny is training new recruits to join the ranks of the regions Pokemon Police Force. In order to earn our pips we must go through the Police Academy Training Program, by completing four key tasks.

Task (1/4) Sign up for the Academy
Officer Jenny’s Academy requires minimum criteria in order to enroll. Applicants must be 18 years of age, have an understanding of the different species of known Pokemon and have caught loyal, reliable Pokemon partners.

Examples of Dog Pokemon : Growlithe, Eevee, Snubbull, Poochyena or Electrike as seen during the Lunar New Year event, or additional dogs such as Houndour.

Task (2/4) Complete the Job Related Fitness Test
Once initiation is complete, it is time to put you through your paces. You cannot be an Officer if you cannot outrun your quarry. Prove your abilities by completing the strength, agility and stamina tests.

Task (3/4) Walk the Beat
Training is complete and its time to take your first assignments. We have reports of Pokemon Poachers in the vicinity, targeting a Ground type Pokemon colony and incidents with a group raiding the local markets for food. You need to place the hunted Pokemon into Protective Custody and disperse the group causing trouble. Make sure to work hard with your Pokemon partner to get the job done.

Task (4/4) Poach the Pokemon Poacher!
While patrolling, Officer Jenny has discovered the camp of the Poacher, who is hunting a rare Ground type Pokemon in the local colony! If you can disrupt the camp, it will bring the Poacher back and we can take him into custody.

The Smoke Ball is unique to this story arc, you cannot obtain more beyond this phase of the story. If you are defeated by the Poacher, Officer Jenny will revive your Pokemon and issue you another Smoke Ball to restart the encounter.

Within the anime, one of the most ruthless and cruel poachers was known as Pokemon Hunter J. She was often seen riding on the back of her Salamance while capturing her prey. Her Dragon types signature move was Hyper Beam. Pokemon Hunter J is the inspiration for this piece.

Use the Special Object to lure a 1* Salamance battle to your location (CP 9,675). It is important to note that no gym is required. Using the Smoke Ball will begin a combat encounter screen to select 6 Pokemon. The Poacher’s Salamance knows the charge move Hyper Beam. Exclusive moves should not necessarily be restricted to community days and this fits the story. Defeat the encounter to complete the story arc.

Post-battle, Officer Jenny takes the poacher away and the remaining Pokemon from the Ground type colony emerge. Within their member is the Pokemon that was being targeted. It is so thankful you have saved it from entrapment, it wishes to come with you on your journey.

Officer Jenny is extremely impressed with your performance in the field and advises that you are more than worthy of a field commission and become an Officer. As part of your Graduation, you are rewarded with a partner trained in the latest police techniques.

Jenny has decided to stay in the local area to continue to train the new recruits. If we need her assistance again, she will setup her field office nearby for our use. She awards you with a new type of Module for use in Pokestops

Only one Field Assignment can be in your log at a time, but you can obtain new tasks from each successive spin when the lure is active. Therefore you are not restricted to one task, per stop, per day.

The Jenny Module will calm the nearby population of wild Pokemon in the relative safety of Police. Pokemon will travel to the Lure and have the potential to award extra stardust in their relaxed state.

The new Module can be rewards from field research tasks, future story arcs or the store for Pokecoins in the same fashion as Lure Modules.

Now, lets investigate the Field Assignments. These tasks can only be released by Officer Jenny and take the space of a Field Task in your journal. They are themed around maintaining your skills as an Officer, such as training and transferring Pokemon, earning Buddy Candy and stopping colonies becoming to boisterous. Rewards would be similar to current Field Tasks but these tasks could reward “dog” or “loyalty” themed awards. For example, candy for each dog or even tier one or evolved dog encounters.

Similar to how Field Tasks have a medal, Field Assignments will also have one:

I hope you enjoyed this concept, in addition to my previous Gym Challenger and Nurse Joy articles, I aim to outline my visions for more story driven content. I have tried to use as much feedback as possible to improve this concept, please keep it coming.

Thank you to the amazing CouplesOfGaming for the art supplied for this article.