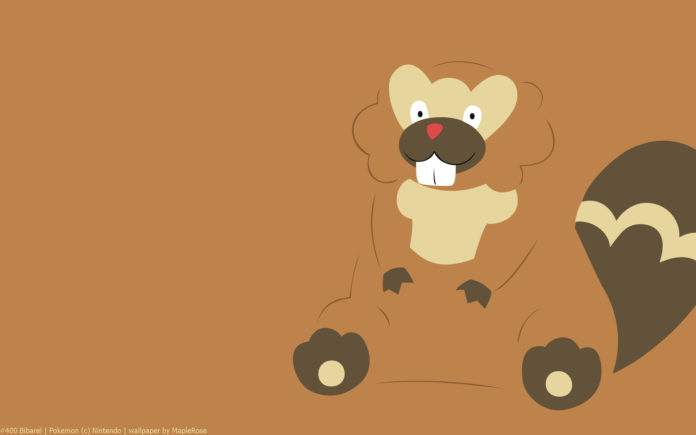 Pokémon GO Bibarel is a Water and Normal type Pokémon, that evolves from Bidoof and originates from the Sinnoh region. Stats show it will have a max CP of 1683, an Attack of 162, a Defense of 119, and a Stamina of 158.

Bibarel’s type combination, while unique, does not do it any favors, especially since that Normal type is bound to get it smashed by Machamp. It has weaknesses to

while having resistances to:

Finally, it has an immunity tier resistance to Ghost types, literally the one useful thing that the Normal type lends it.

We expect that, since it is the Gen 4 equivalent of Rattata, that it will evolve from Bidoof with 25 candies.

Here, we will have our charts to compare this industrious beaver to other Normal and Water types both current and future:

These are the moves that Bibarel can possibly have, basing it on what moves it learns in the main series through various means, such as leveling up, TMs/HMs, Tutors, etc. Bold will indicate STAB (Same Type Attack Bonus).

While is is nice to see the unique typings that Generation 4 brought to the table, with the likes of Empoleon, the continuation of the Swinub line with Mamoswine, Rotom, Snover, and Torterra, it does not mean it is always a useful type combination, or that it is effective for that certain Pokémon. Take Bibarel, it is just mediocre all around.

In the main series, it could work some gimmicks in battle with some abilities it had at its disposal, such as the stat boosting ability Simple, as well as being a Hidden Machine slave so that you did not have to load your other, more useful party members up with moves that were required to progress in the game.

However, as neither of these are even considerations in Pokémon GO, it will be prime evolution fodder at best. Simply put not every single Pokémon that may come to GO will be useful, as unfortunately the battlling just does not have the complicated intricacies that the source games had, so even some Pokémon that could be gimmicks and situationally useful in those games, are entirely useless battling wise in GO.

As you can see above, Bibarel does not have the stats to back up any of its moves, and even then its available movepool is lackluster. A bad sign for a Water type is when that Pokémon does not have access to Hydro Pump. Surf is manageable with some other Pokémon, but not Bibarel.

Best case scenario, Bibarel is a throwaway attacker or gym defender that you transfer after use, or is the product of a mass evolution spree.

Shiny Bibarel follows along with Bidoof, making the normal Brown appear a bit more golden, and having the Black accents on its mouth, tail, and feet becoming purple-ish.