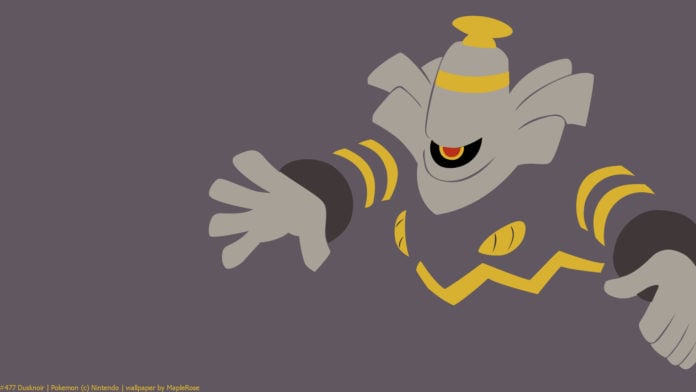 Pokémon GO Dusknoir is a pure Ghost type Pokémon which evolves from Dusclops (which in turn evolves from Duskull). In the main series games, it evolves when a Dusclops is traded while holding a Reaper Cloth. Its evolution process might translate to Pokémon GO by requiring 100 candies to evolve a Dusclops, along with the addition of the Reaper Cloth as an evolution item.

With a fairly measly max CP of 2046, Dusknoir is highly unlikely to be a meta-changing addition. Like its pre-evolution, it has a poor attack stat but is quite tanky, sporting 180 attack, 254 defense, and 90 stamina.

Theoretically, Ghost types could be playing a huge role in the current metagame, thanks to the abundance of powerful Psychic type raid bosses. Even so, the gym meta is currently dominated by tanky Normal types which are, of course, immune to Ghost moves. Unfortunately, the type in general is held back by poor stat distribution in most cases; take a look at the top Ghost types’ stats and how Dusknoir measures up to the rest of its type:

Dusknoir falls at the bottom of the list of useful Ghost type attackers — it simply can’t compete with Gengar’s raw DPS. However, the Ghost Dragon typed legendary Pokémon Giratina will also be released in Generation 4, and will completely outclass other Ghost types in its Origin Forme (in which its attack and defense stats are switched). Even Mismagius (the Gen 4 evolution of Misdreavus) will be far superior to Dusknoir, in terms of attacking power and stat distribution. Poor Dusknoir won’t stand much of a chance to be relevant as an attacker.

However, it may see limited use in a defensive role. As a Ghost type, it is immune to Fighting type moves and will be a decent choice to place in between tanky Normal types in Gyms, by forcing the attacker to switch out their Machamp. Its tremendous Defense stat and frankly horrible Stamina makes it somewhat comparable to Wailord on defense (massive 340 Stamina, awful 87 defense).

As a Ghost type, Dusknoir will take super-effective damage from Dark and other Ghost types, and will resist Poison and Bug while being immune (double-resistant) to Normal and Fighting type moves.

Based on moves that Dusclops and Duskull already have access to, as well as Dusknoir’s learnsets in the main series games, here is a chart of some of its possible moves:

Dusknoir has several weaknesses and strengths that are boosted in varied weather conditions. The chart below will help you visualize what weather is beneficial or harmful for battling or raiding with Dusknoir.