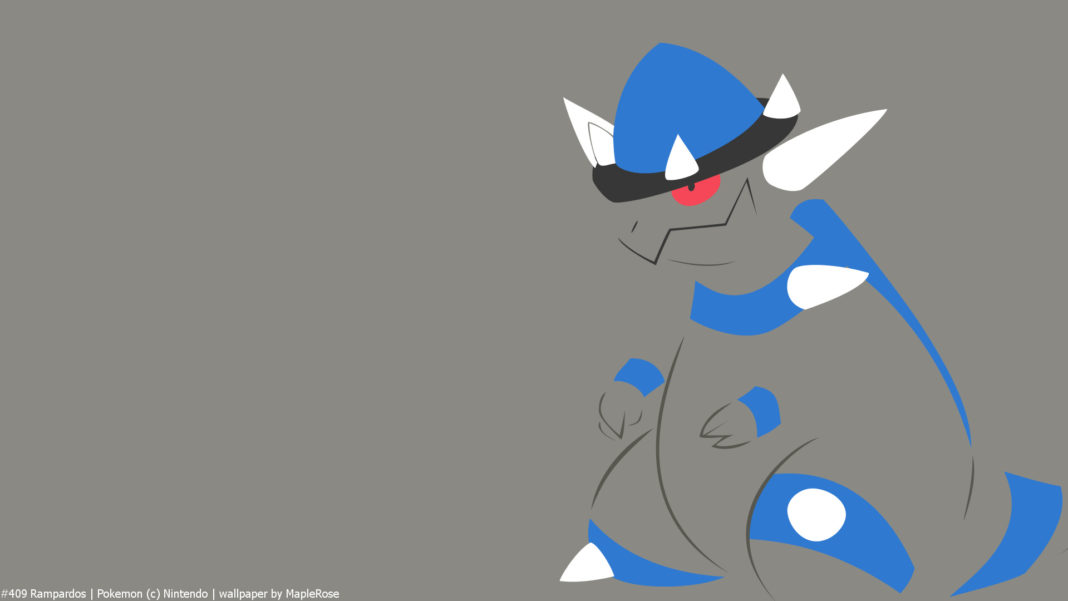 Rampardos, and its pre-evolution, Cranidos, are Rock type Pokémon that are introduced in Generation IV, and are considered fossil Pokémon, along with Shieldon and Bastiodon. While Bastiodon was made as a defensive beast, Rampardos is a monster attacker, boasting one of the highest Attack stats in the game, 295. This attack stat gives it the highest attack of all Rock types, and the 4th highest attack stat in the game behind Deoxys Attack and Normal formes, and the well balanced monster that is Mewtwo.

Before we start looking at the meta for this guy, let’s take a look at him.

That attack stat is what makes Rampardos stick out, and makes it a definition ‘glass cannon’. Having a higher stamina helps to balance out that low defense, but is not going to help it survive a lot of hits. It is best to use Rampardos against Pokémon with moves that it resists, for best longevity.

Being a pure Rock type, Rampardos has a good amount of weaknesses (poor rock types). Weaknesses: Fighting, Ground, Grass, Water, and Steel types. Luckily, you should not be pitting your Rampardos against Pokémon of these types usually.

Resists: Fire, Flying, Normal and Poison types. Fire and flying especially, you will want to bring your Rampardos out to take some hits and deal some damage!

Rock is good against: Fire, Flying, Ice, and Bug.

So, you are going up against a Ho-Oh or Moltres raid, and you want to pick out a good Rock type, why should Rampardos be on your radar? Let’s take a look at the stats compared to other Rock types. Keep in mind stats are not everything, this is just a visual to help see where Rampardos stands. This list will omit Pokémon from far off generations, and deal only with what we have now or in the possible near future.

There are some honorable mentions for this list, some of the Pokémon that come from far off gens, including Nihilego, a gen 7 Ultra Beast, Arceus, a gen 4 mythical that can be any type, Terrakion, a gen 5 legendary, and Archeops, a gen 5 fossil Pokémon (though we fear it will get a similar treatment to Slaking, since its main series ability is Defeatist). The only one that comes close to the attacking power of Rampardos is Archeops (292 atk), but with it being so far off, we are not sure what is to come of it, or if any of these honorable mentions will be meta relevant.

From what we currently have, using only more meta relevant, or at least high stat, Rock types, we can see that Rampardos leads in terms of attack, is rock bottom in terms of defense, but middle tier in stamina. With your best bets for Rock type offense being Tyranitar, and Rhyperior, adding a glass cannon or two like Rampardos could help boost your time to win. Always lead your teams with your glass cannons, then use Tyranitar and Rhyperior towards the end as your more bulky anchors. Having a mixed team is always great, but if you were really ambitious and overflowing on revives, full teams of glass cannons are fun too.

Before we can look at a meta analysis, we have to look at the moves that Rampardos gets access to.

The best fast move you want to use in any circumstance will be Smack Down. Smack Down is much more powerful than Zen Headbutt, benefits from stab, and honestly, there is no matchup that comes to mind that Zen Headbutt would ever be better.

The best charge move is Rock Slide. Rampardos was blessed with a two bar Rock type charge move. Two bar charge moves allow for glassier Pokémon like Rampardos to get two or three charges off before they go down, a prime comparison is Shadow Ball Gengar. Though Smack Down is not quite as fast as Shadow Claw or Lick on Gengar, having a two bar move ensures it will at least be able to get off one Rock Slide. It would be a tragedy if Rampardos were to be stuck with Stone Edge, and would faint before it could even get off one in some situations (Steel Wing Ho-Oh anyone???). Outrage is limited coverage, even if for some reason you wanted to use it in PVP, a lot of dragons are Flying type, and will be weak to Rock anyway. Flamethrower provides coverage for Grass types, but as mentioned in our intro, we do not suggest using Rampardos for anything it is not going to be resisting.

Using the Database’s DPS&TDO calculator, we can see how Tyranitar, Rhyperior and Rampardos compete with each other in terms of damage output and survivability. This calculation was run with level 40, 100% IVs, a 200 defense defender model, assuming all neutral damage. Let’s see how they match up!

In short, Rampardos has a very high DPS, or damage per second, and therefore can get more damage off in the short time it lives, which contrasts with Tyranitar and Rhyperior’s lower DPS and higher TDO, total damage output. Having higher DPS is important if you are timing out of raids, on a solo or a duo, and having a higher TDO is important if you are fainting out, so that you can hold on for a little while longer. Finding your sweet spot of not fainting, but getting the most damage off in the least time is your goal when team building for your specific need.

For an easier and more specific comparison, a battle simulator was cross referenced against a Moltres level 5 boss, here were the results from Tyranitar, Rhyperior and Rampardos, using the same move sets analyzed above, no specific boss move set, in extreme weather (no boost), and no friendship bonus. The simulator used 12, 100% IV Pokémon for each simulation.

From this simulation we can see that though Rampardos will faint a lot more, and you can lose almost two full teams and maybe even dip into a third team, the damage range is much greater than that of Tyranitar and Rhyperior. The take away from this is not only that Moltres can be a pretty easy duo in certain situations, but also that when looking for your best duo ability, having a glass cannon like Rampardos can get you a long way.

Though not currently released in Go, it is always fun to see what the shiny forms of various Pokémon look like. This shiny in particular is rather amazing, with all the blue on its body turning to a brilliant red, and its gray body getting the slightest brown tint.

Rampardos was not the brightest Pokémon huh? Let’s see what its Pokédex entries have to say.