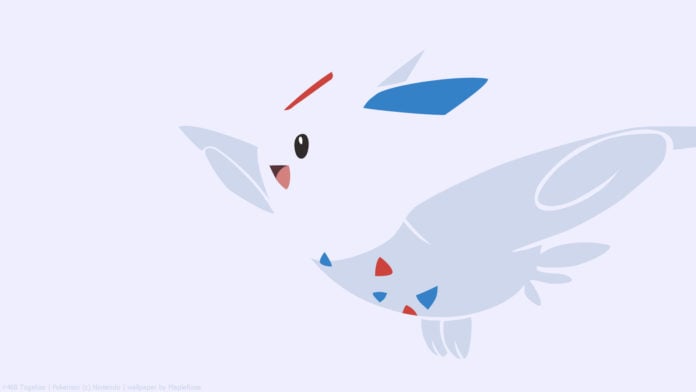 Pokémon GO Togekiss is a dual Fairy and Flying type Pokémon. Togekiss will definitely be an exciting addition to the meta game: its max CP is 3171, which will place it as the highest-CP Fairy type until Florges and Xerneas are released in Gen 6. With an Attack stat of 225, Defense of 227, and Stamina of 170, Togekiss has the potential to become a fearsome Dragon slayer!

Togekiss evolves from Togetic (introduced in Gen 2 along with its baby form, Togepi). In the main series games, it evolves when a Togetic is exposed to a Shiny Stone. Most likely, the evolution of Togetic to Togekiss will cost 100 candies and the evolution item Shiny Stone. The candy evolution cost of Togepi to Togetic is likely to be cut down to 25 (originally 50) when Togekiss is released.

Togekiss in the Meta

Sadly, Fairy types fare poorly in the current meta for two main reasons: their lack of access to a STAB quick move and (in general) low base stats. The future looks slightly brighter for Fairies, but for now, only three currently available Fairy types can break 2000 max CP — with so little competition, it won’t be hard for Togekiss to rise above the rest. For a more in-depth look at how Fairy types can potentially be made useful, check out Ysmael’s analysis on Fairy types.

From the above list, Togekiss clearly has the most well-rounded stats of all currently available Fairies. Although it may not have the highest stat in any category, it is tankier than Gardevoir (the current best Fairy type) and evidently outshines all other competition.

If Niantic decides to implement a Fairy quick move to make Fairy types usable, Togekiss will likely see much use in the future meta. Fairy may be super-effective on Dark, but you might want to refrain from attacking Tyranitar with Togekiss as Stone Edge deals super-effective damage to Togekiss’ Flying half.

Togekiss will be great for attacking Dragonite, Salamence and other Dragon types in Gyms, and will deal super-effective damage with Fairy moves to the legendary raid bosses Palkia and Giratina in Gen 4 (Dialga’s Steel typing makes Togekiss a poor counter), as well as Rayquaza, Latios, and Latias if they ever return to Raid battles.

It is also likely (but not guaranteed) that Togekiss will be able to learn a full Flying moveset. In any case, here’s a comparison of Togekiss’ stats with those of other prominent Flying types (note that only Pokémon which are able to learn Flying type moves are listed, therefore Gyarados, Salamence and the Legendary Birds are excluded):

Flying types have limited use in the meta to begin with, and as per the chart above, every major contender for the title of Flying type king is far better off in a different niche. Rayquaza is the only one of the above that can learn a double Flying moveset, Air Slash/Aerial Ace — but there’s really no reason to power up a Rayquaza as a Flying rather than a Dragon attacker. Overall, it’s highly unlikely that Togekiss will see much use as a Flying type as they are simply not relevant — not even for Machamp raids.

Togekiss, being a FairyFlying type, takes super-effective damage from Poison,Rock,Steel,Electric, and Ice, while sporting resistances to Grass and Dark and immunity/double resistance to Ground, Bug, Fighting and Dragon.

Based on moves that Togetic already has access to, as well as Togekiss’ learnsets in the main series games, here is a chart of some of its possible moves:

Togekiss has several weaknesses and strengths that are boosted in varied weather conditions. The chart below will help you visualize what weather is beneficial or harmful for battling or raiding with Togekiss.

Shiny Togekiss will be available as soon as it is released, as Shiny Togepi and Togetic are already obtainable (through hatching Shiny Togepi; good luck!). Shiny Togekiss looks nearly identical to its regular form; it has a slight cream tint to its usually pale blue body, and the red and blue accents atop its head and its chest switch places.

Togekiss is known as the “Jubilee Pokémon.”