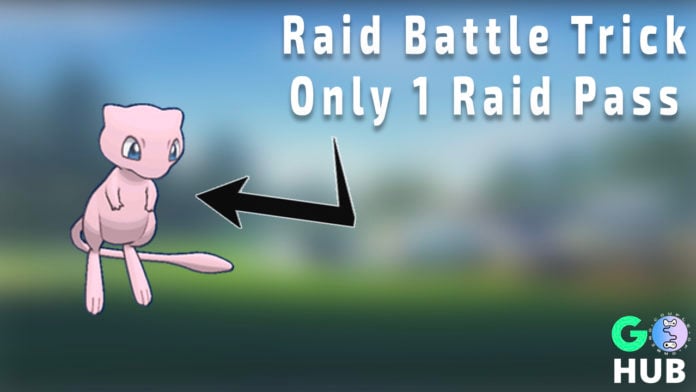 In order to get a Mew you have to complete 8 Special Research quests with various tasks. One of them is to Battle in 2 raids and Battle in 10 raids which seems like a lot of passes to spend. If you read carefully, the quest doesn’t specify you have to win in the raid. In fact, there is a method which allows you to use only one single raid pass for each of these quests.

This quest is a part of A Mythical Discovery 3/8. As stated above, you don’t have to actually win the raid. All it takes is to enter the raid, get yourself knocked out and wait in the rejoin screen until the timer ends the fight. Remember that you cannot run away from the raid before you time out! After that, you can repeat the raid again but this time successfully. If you want to save up potions and revives, you can escape from the battle to the rejoin screen and wait there the whole time.

This quest is a part of A Mythical Discovery 6/8. The trick consist in the same procedure as the previous one, however it requires one more trainer willing to help. While you’re doing the time out trick, the other person creates a lobby for you, roughly 80-85 seconds before you time out. That way you avoid waiting in the lobby for full 2 minutes excluding the first attempt. You get 45 – 40 seconds of extra time to join the lobby comfortably. It might seem like too much but don’t forget that you have to see the time’s up screen, click the gym and enter the new lobby again. It should take 38 – 42 minutes. Note that it’s only possible in raids tier 1-4 because of the time limit being 180 seconds.

Special thanks goes to trainer Gorrdy for discovering the method with creating lobbies.