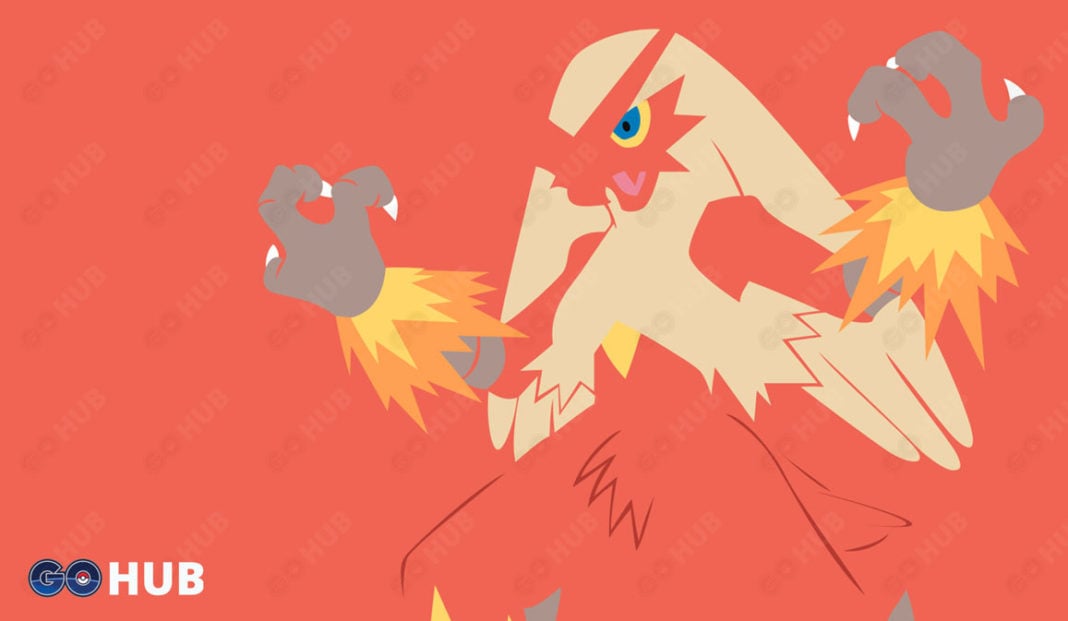 Blaziken’s Community Day exclusive move was announced as Blast Burn. However, there’s more than that, because kicking in on Community Day and going forward, it will also be able to get Blaze Kick via TM!

We already know how good Blast Burn is, but Blaze Kick is a new move, and its stats were just added to the game data. Is it good, though? Let’s find out.

Note: The stats of Blaze Kick in this analysis are up to date. Its base power went down from 50 to 45 in the GAME_MASTER file.

Following my previous meta-analyses, you’d be expecting a table below where I show which is Blaziken’s best moveset for PvE and PvP. However, this time, it will be a little bit different, due to the fact that Blaziken can be used for very different purposes.

Blaziken is a fire and fighting-type. Although it can learn non-STAB moves, its main purpose is to use STAB moves.

Blaziken’s movepool is quite large. Blaziken can have Counter and Fire Spin as fast moves, and Overheat, Brave Bird, Focus Blast, Blaze Kick, Blast Burn (CD exclusive move) and Stone Edge (legacy move) as charge moves. Let’s analyze each move individually and decide which moveset to use for each purpose in the end.

So what’s the final verdict? (PvE only)

Unlocking a 2nd Charge Move for Blaziken “only” costs 10k Stardust, but it’s not really necessary. Blaze Kick is a great charge move, true, but you will probably use it only when you’re about to faint, and you don’t have enough energy to use Blast Burn, which is a superior move. It’s up to you to decide if it’s worth the extra 10k Stardust to unlock. If you already have a Blaziken that will never be able to learn Blast Burn, definitely give it Blaze Kick, you won’t regret it!

As a fighting-type attacker, it’s pretty decent, but there are better options, such as Machamp or Breloom.

Blaziken in the Raid Meta

Blast Burn Blaziken has the highest fire-type DPS in the game as of now. However, its defensive stats are not that great. The best way to analyze where it stands in the meta is by running some battle simulations (as always, using Pokebattler), so let’s see how it performs. Since the main goal of the following comparisons is to showcase how Blaziken compares to other Fire-type Pokémon, non-fire-type Pokémon will not be shown unless their performance is close to (or above) Moltres’ or Blaziken’s.

Grass-types are weak to Flying, Poison, Bug, Ice, and Fire-type attacks. Thus, you’d expect to see strong raid attackers with powerful moves from those types in most raids against grass-type raid bosses. There are not many grass-type raid bosses to provide a fair scenario, and most of them have a 2nd typing. That’s why Shaymin-Land was chosen, although it will probably not come as a raid boss due to the fact that it’s a mythical Pokémon. 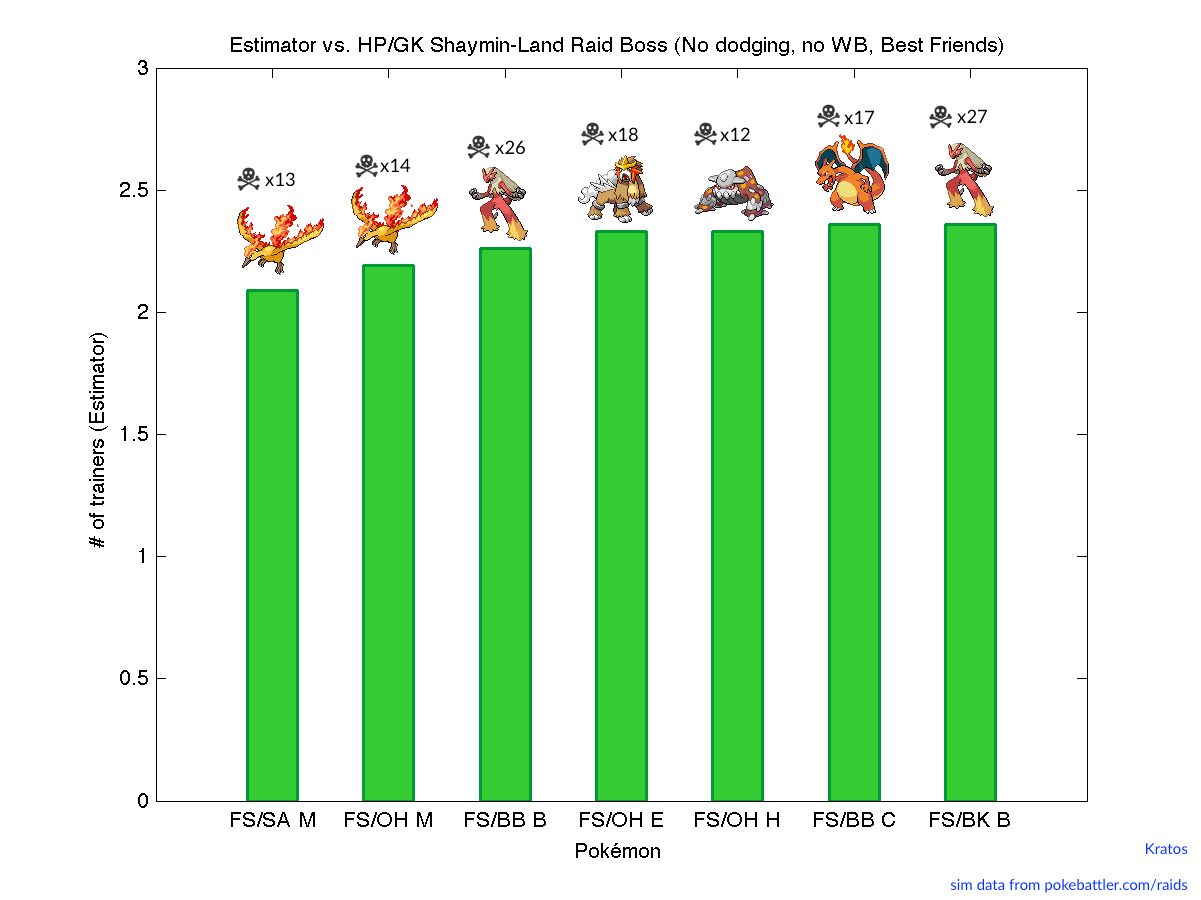 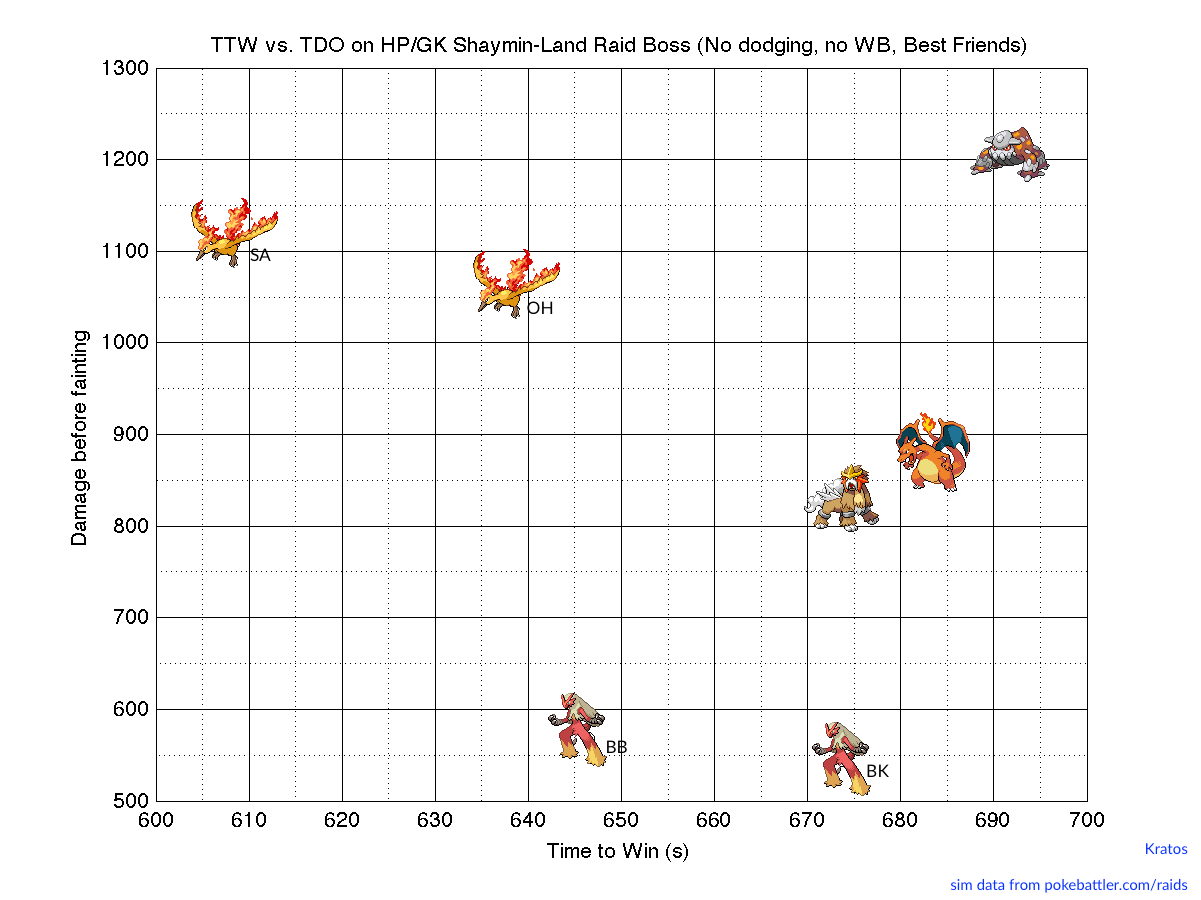 As you can see, against Grass-type Pokémon Sky Attack Moltres performs really well. It’s also important to mention that against Grass-type Pokémon with STAB moves, Moltres and Charizard have a better type combination than Blaziken because they are flying-types and double resist Grass-type moves. Furthermore, Blaziken is a glass cannon due to its average defensive stats. These are the main reasons why the difference in TDO is that big, if you were wondering.

Let’s get this straight, Blaziken does have the highest fire-type DPS in the game as of now. However, its defensive stats hinder its performance significantly. Having the highest DPS in the game does not mean that you will be the king of the meta, as you can see in the graph. True, its Time-to-Win is very good, but the difference in the number of projected deaths is significant enough to mention it. That’s why Estimator is usually a better metric to check when running simulations on Pokebattler. And don’t forget that against grass and bug-types, Sky Attack Moltres’ performance is amazing, and Blaziken can’t top that.

Blaziken has a very decent attack stat, but in this particular battle, it faints 26 times whereas Sky Attack Moltres faints 13 times. As said, Blaziken’s defensive stats hinder its performance significantly, but it is still a very good counter nonetheless. Sky Attack is a legacy Move for Moltres and powering it up will probably require more valuable resources such as rare candies, so keep that in mind.

Overheat Moltres is a bit worse than Sky Attack Moltres and Heatran is the extremely tanky option (with less DPS) as it also double resists Grass-type moves. 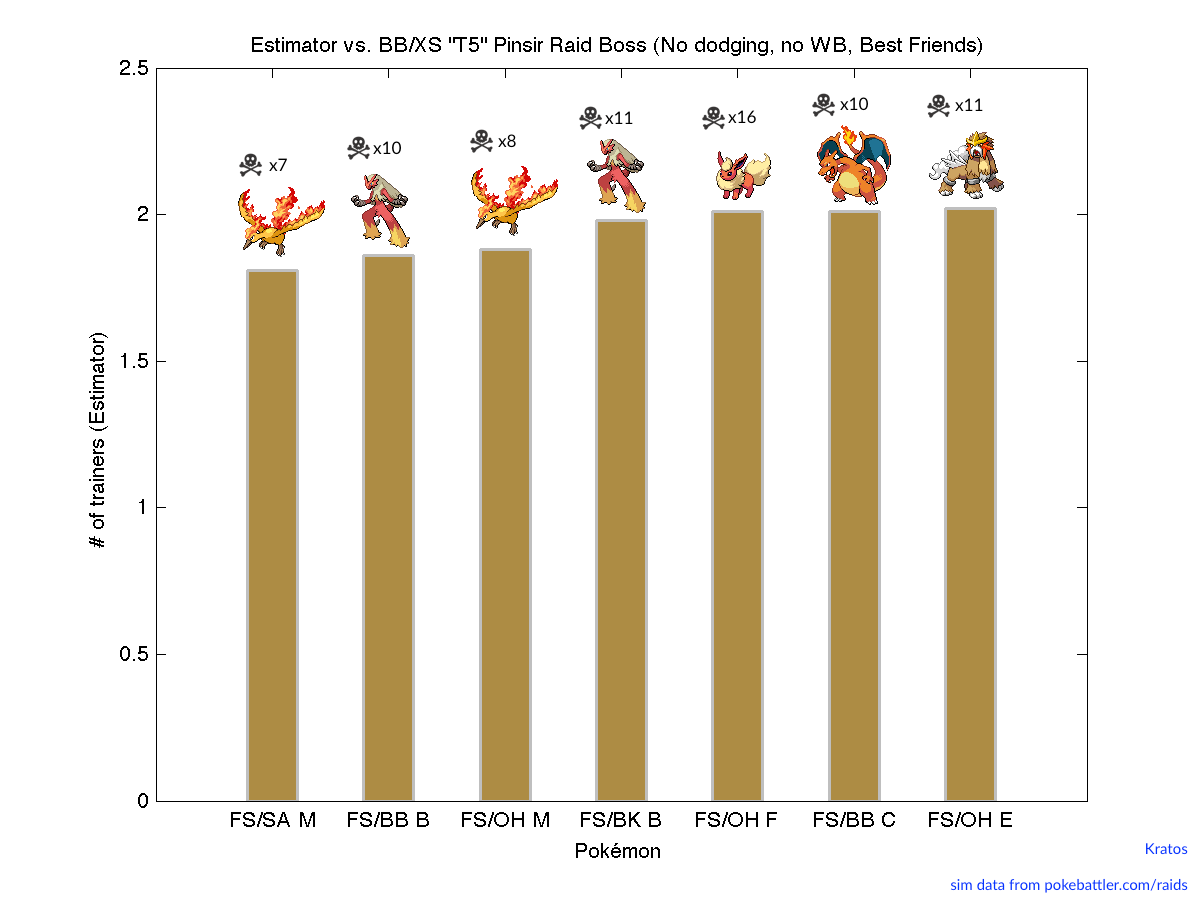 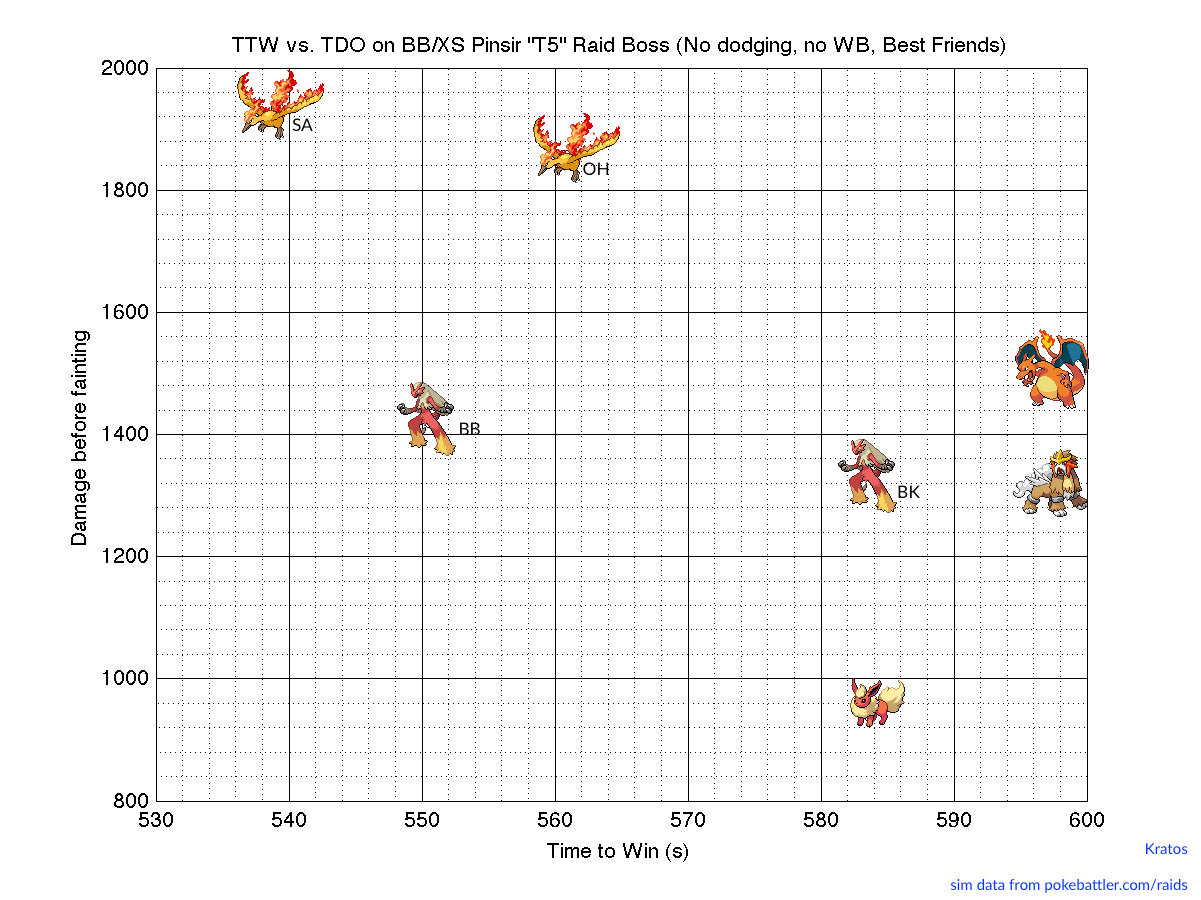 Results are similar to the ones above. Sky Attack Moltres is the #1 option for this fight, yet again, as you can see in the graphs. This time, however, both Blaziken and the fire/flying-types double resist Bug-type moves, and therefore, the difference in TDO won’t be as significant as before.

In an ideal scenario with endless HP, Rampardos would be the best option for this fight by far due to its supreme-tier attack stat (and its great moveset). However, defensive stats come into play, and although its performance is still very good, the number of faints and times you will need to relobby are significant enough for you to consider other options.

Due to the fact that Blaziken (like Moltres and Charizard) double resists Bug-type moves, the projected number of deaths is significantly lower than in previous scenarios, and its performance is very good. If you know how to dodge effectively and make use of your energy wisely, Blast Burn Blaziken’s performance could be close to Sky Attack Moltres’!

Vs. Ice and Steel-types

Against ice and Steel-types, Blaziken can use Counter instead of Fire Spin, but it will perform really well with both. Specific counters might vary a little bit (for example, Meteor Mash Metagross performs really well against ice-types) but the key part of the analysis will be to see how Blaziken performs against the other powerful Fire-types, now that Sky Attack Moltres is outperformed by its Overheat variant (Sky Attack does not deal super effective damage in these scenarios). 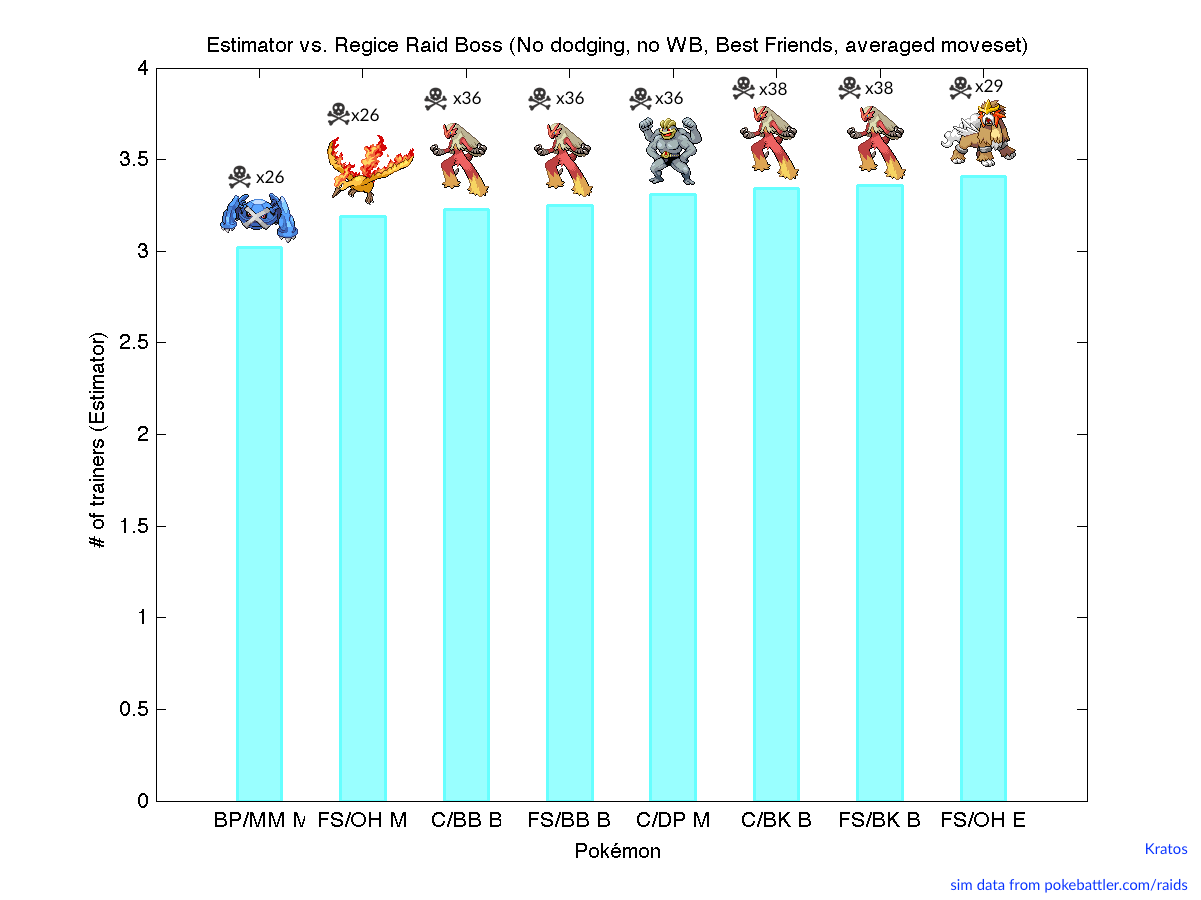 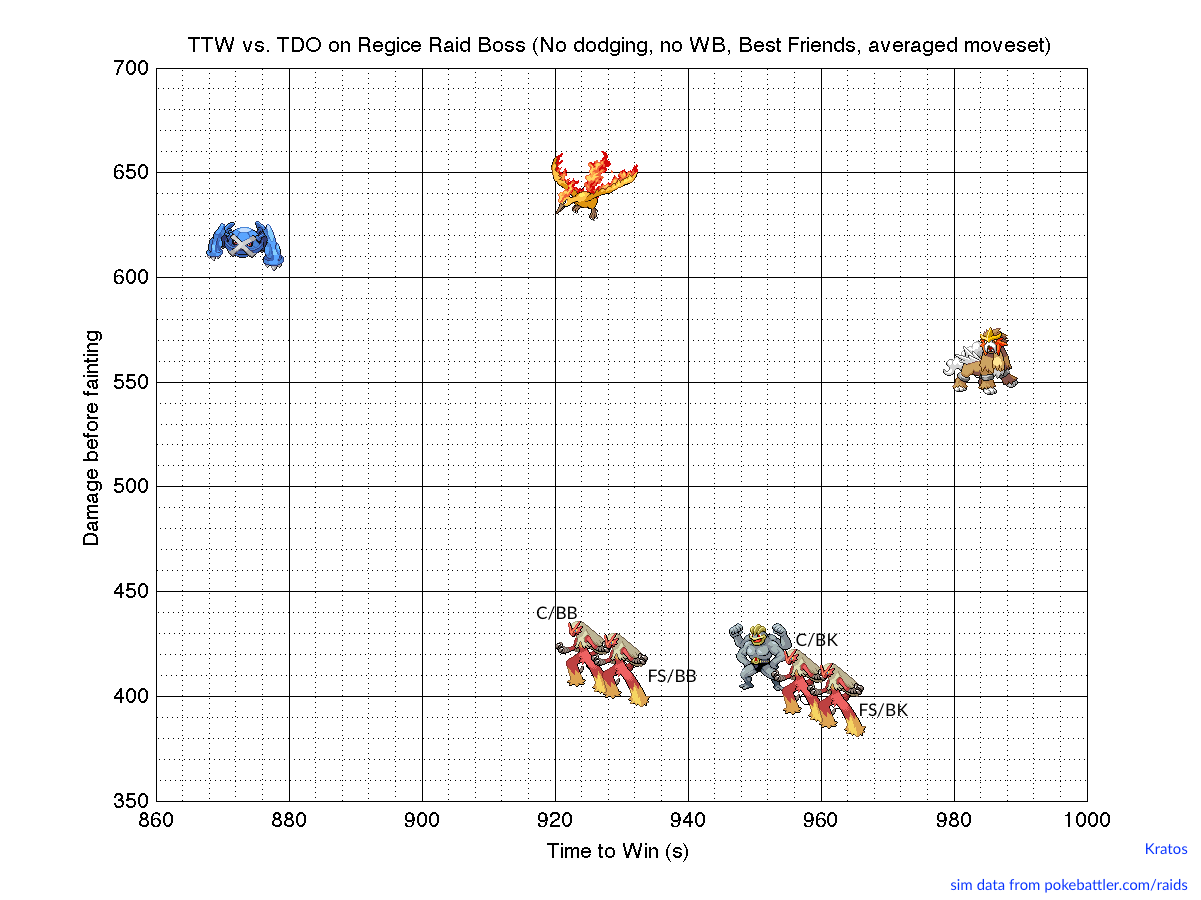 Alright, here’s where things get interesting. Let’s start with Regice. Sky Attack Moltres is no longer a viable option as it doesn’t deal super effective damage; thus, its Overheat variant will be considered.

Overall, Meteor Mash Metagross is the #1 choice against Regice. It will suffer a bit against Earthquake, but even then, its performance is top-tier if you know how to time your dodges. Rampardos is a very strong option but its very squishy and should probably be avoided if Regice has Focus Blast (and perhaps even Earthquake).

Against Blizzard, Blast Burn Blaziken is better than Moltres. And against Focus Blast, their performance is very close. However, Blaziken has nothing to do against Earthquake (because Moltres resists it while Blaziken takes super effective damage). If you’re a dodge master (dodging Earthquake is not that difficult anyway), Blaziken can put up a fight and challenge Moltres, though! 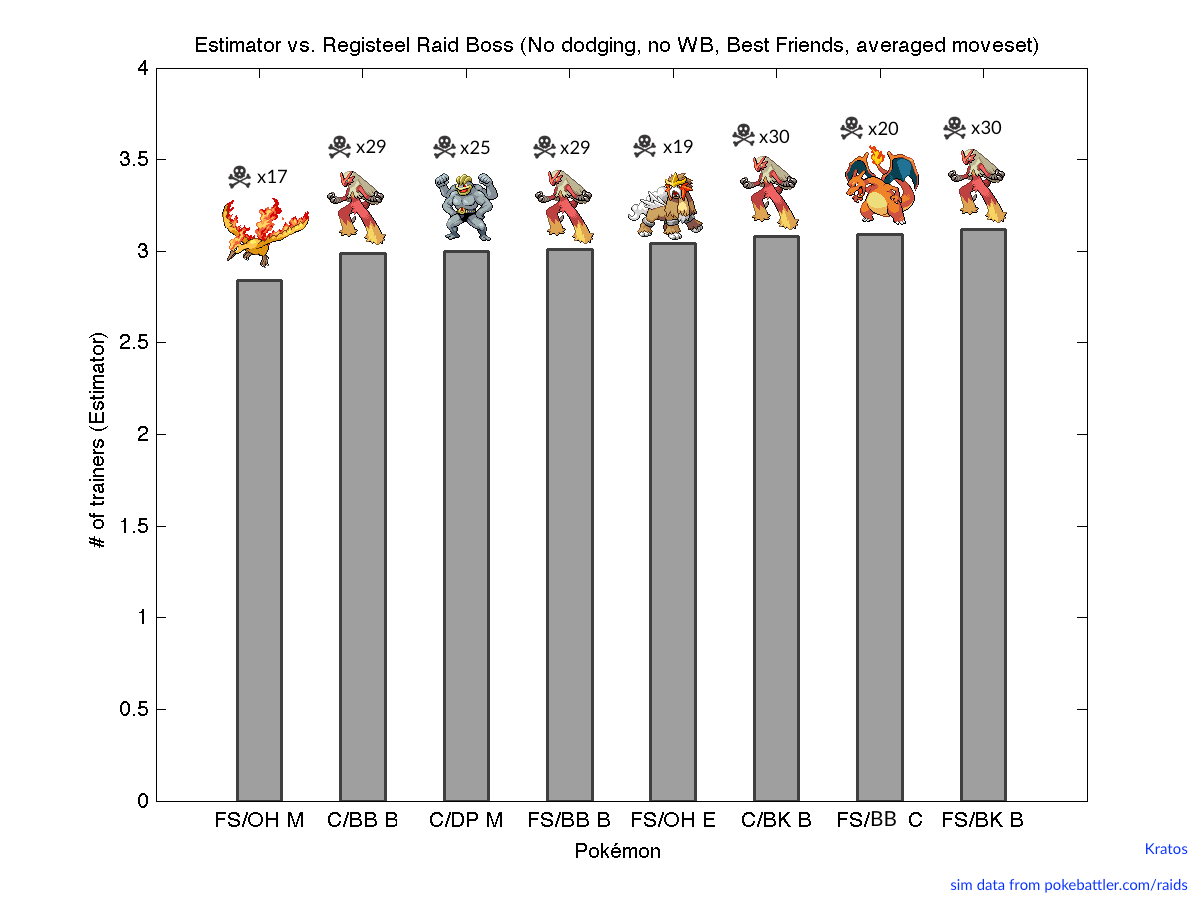 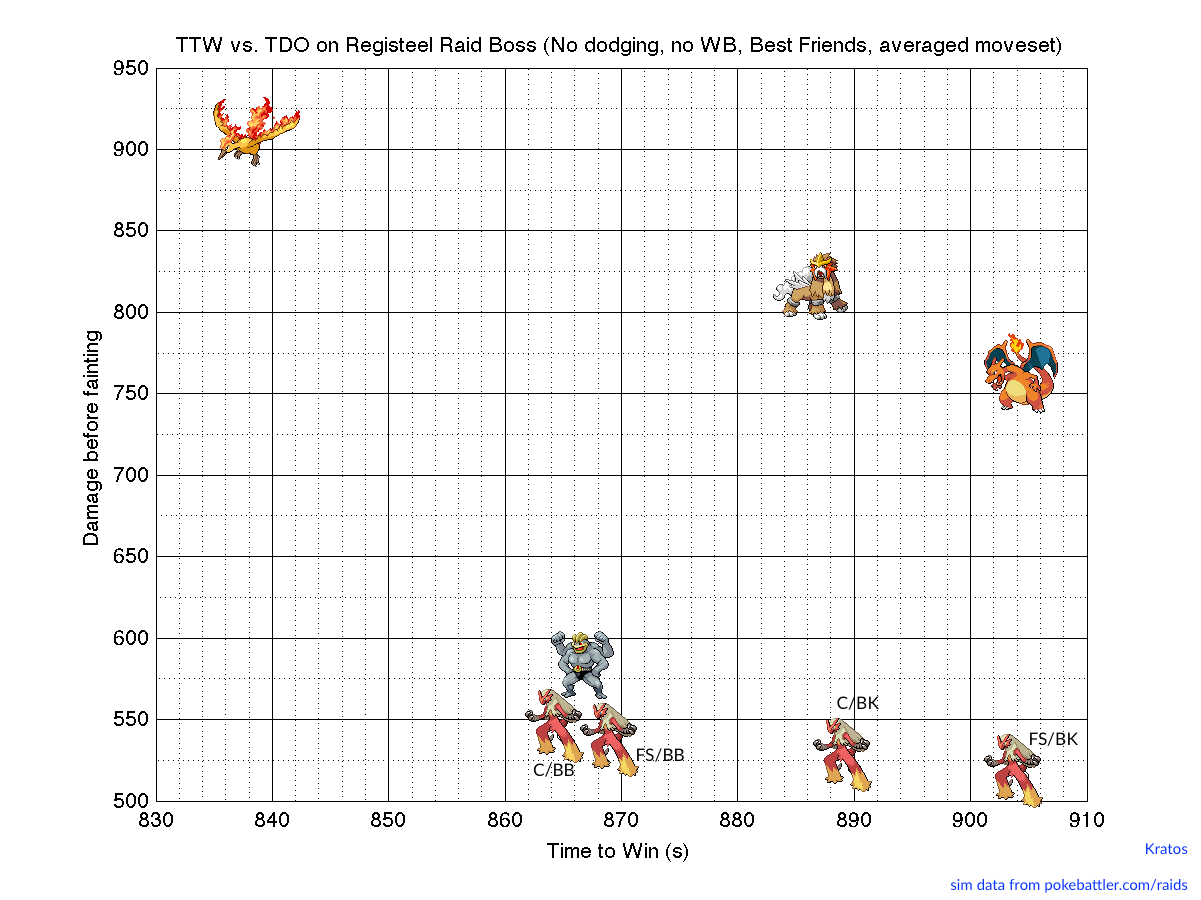 And now, Registeel. Moltres and Blaziken are the best choices for this raid, and Machamp as a fighting-type representative is very good too. With good RNG and well-timed dodges, Blast Burn Blaziken’s performance is top-tier and on par with Moltres’. The additional bulk of Moltres makes up for its slightly lower DPS when compared to Blaziken, and that’s why usually Moltres is on top.

But don’t forget that results and rankings can vary by moveset and raid boss, as it was described with Regice above. Simulators are not yet ready to test the Blast Burn + Blaze Kick Blaziken combo (to reduce energy waste), but its performance against ice and steel-types would probably be on par with Overheat Moltres. All in all, Blaziken is an awesome attacker for sure!

Blaziken is now a decent option to use in PvP. It’s not a meta-dominant Pokémon but the addition of Blast Burn and Blaze Kick to its movepool are definitely an upgrade to its prior performance, and it can now have its niche use in some restricted cups. Blast Burn is a very powerful charge move with a 50 energy requirement and 110 base power (2.20 DPE). Blaze Kick has the same stats as Fire Punch, a decent charge move to bait shields (55 base power, 40 energy, 1.38 DPE). As you can see, not amazing, but definitely usable.

If you want to use Blaziken in PvP, its best moveset is Counter and Blast Burn + Blaze Kick. Although it might seem a little bit redundant to have two charge moves of the same type, it gives more flexibility due to the fact that Blast Burn requires 50 energy to fire off and Blaziken is not very bulky. Other coverage options are possible too, but none of its other available charge moves are going to be very useful either.