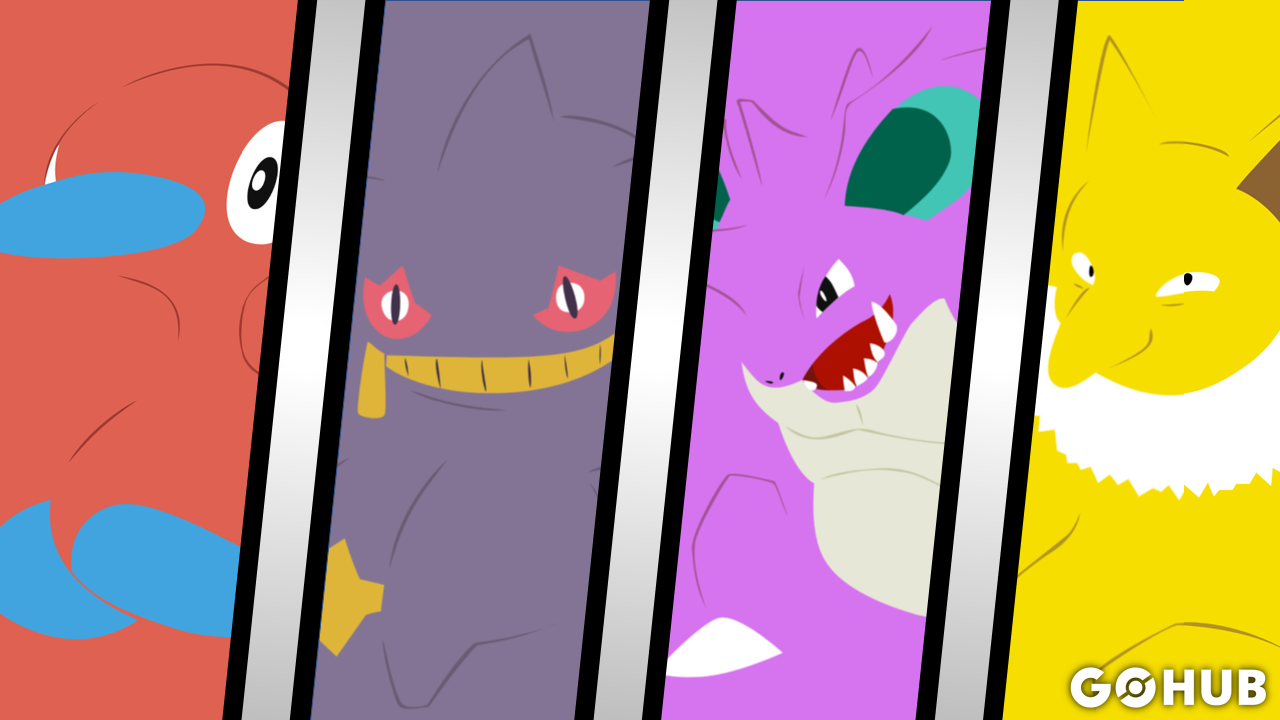 You may have realized by now that the Hub is celebrating “March is for Meta”, a month in which we choose to pay extra attention to the meta-game in Pokémon GO.

Up until now, you may have followed up on some of our articles talking about certain Pokémon and their future in the meta-game, or the main meta-game Pokémon. However, here we will take a look at the Hidden Gems of the Pokémon GO Meta, the Pokémon that didn’t make the initial cut when they should have, these are the Pokémon you should have on hand in the case scenario that your go to main-meta team fails.

We will be taking a look at each typing individually and the Hidden Gems within them.

The Normal typing currently holds a big portion of the gym meta, and its no wonder why, having only a single weakness to Fighting type attacks and being able to handle Ghost type attacks very well.

Although Ursaring and Porygon2 would not normally be considered, their higher CP compared to other normal types help when it comes to the Meta, Ursaring having a higher DPS Moveset, but lacking in defense while Porygon has above average all around stats.

The Fire typing is currently a fan-favorite for the gym meta, although having a heavy weakness to the popular Rock, Ground, and Water type attacks, it is resistant to may different attack typings.

Just because they are starters does not mean anything less of them, Blaziken having access to not only Fire but Fighting moves makes it a strong counter to many Pokemon, however when it comes to Charizard, we recommend putting it on the bench when it comes to dealing with Rock types as it will take twice as much damage because of its additional Flying typing.

The Water typing is well sought out for collection, but not so much as for meta use, which is strange because the Water typing alone only has weakness to Grass and Electric type attacks.

Here we are dealing with some favorites for many Trainers, including Feraligatr with a dual Water type moveset and Lapras with a dual Ice type attack, in both Pokemon we can see the STAB benefit, and should be able to hold up quite well especcially with their Max CP.

The Grass typing has seen a reemergence after the passing of the Legendary Weather Trio, however, it also has a lot of weaknesses, making it a bit weak in general. Some of its weaknesses include Fire, Flying, Poison, Bug, and Ice type attacks.

Like stated previously, the Grass typing currently is not a meta-based Pokemon, and the same still applies here, although we can consider Vileplume and Victreebel to be the Hidden Gems of the Grass meta-game, it still doesn’t make them as useful as the other Hidden Gems in their respective typings.

The Electric typing has been one of the most used types in the Pokemon Go meta when it comes to attacking, having only a single weakness to Ground type attacks and being supper-effective towards the popular Water and Flying type attackers. Some of its weaknesses include Fire, Flying, Poison, Bug, and Ice type attacks.

With the limited amount of Electric type counters in game, the Hidden Gems here are Ampharos and Raichu, Ampharos carrying the heavier weight of the “Hidden Gem” title, having great stats, a well above average moveset, and a more than necessary Max CP.

The [Ice] typing is commonly used as a popular counter to the strong Dragon types in game, however should be used with caution because of its weakness to Fire, Fighting, Rock, and Steel type attacks.

When it comes to the Ice types in game, the only real Hidden Gem we can recommend is Walrein, which is still a great option on its own. Having great all around stats and a great Max CP, Walrein can work itself into replacing a Jynx or Piloswine you may be using as a main ice-meta Pokemon.

The Fighting is a very common typing to come across at gyms and at raids because of its brute strength, and although ideally you could have a full team of Machamps, for most trainers this isn’t possible at least not without the help of a fellow trainer at a Machamp Raid. The Fighting typing has weakness to Fairy, Flying, and Psychic type attacks.

Just like Walrein with the Ice types, Primeape is the only Hidden Gem from the Fighting type roster, the main meta-game pokemon include Machamp and other strong Fighting types, but Primeape is a much more accessible Pokemon for many trainers, requiring only 50 candies to evolve compared to Machamp’s 124 required candies.

The Poison typing as of now may not serve much use, but as more and more Generations come out, their use in the meta will only grow. Although many Trainers don’t take the Poison types to use in their regular teams, but if you want to put up a fight against those swift Grass types, Poison is the way to go.

If there is one clear example of relationship goals in Pokemon GO, it would be with these two. The advantage with using these two as your Poison Hidden Gems is that since their movesets are exactly the same, you can choose which one to use based on its stats, Nidoking as an attacker or Nidoqueen as a Gym defender, in a certain sense, you have the best of both worlds with this duo.

The Ground typing is a fan-favorite for many Trainers and for obvious reasons. The Ground typing is popular for its usefulness all-around in the meta not only as an attacker but as a defender as well, making it a viable solution to almost any kind of battle.

As we can see here, one of these Pokémon takes the cake when it comes to rising above, Donphan. Donphan has wonderful stats, a strong moveset, and a very plentiful Max Cp of 3002, although Flygon can also throw a curve-ball into the game, because of its lower stats, we cannot recommend it as much as Donphan, but having a Dragon typing does make it rise enough to be considered the Ground Hidden Gem.

Unlike for every other typing we have seen, there are no Hidden Gems for the Flying typing. The reason for this is because the Flying typing is (Until Generation 5) only a secondary typing, making it impossible to determine any Flying type Hidden Gem as of now.

The Psychic typing is often used in the meta-game when it comes to gym defense and in raids, having weaknesses to Bug, Dark, and Ghost type attacks, it is quite easy for a Pokémon with this typing to work around its foes.

Although Hypno may not seem like much, its powerful moveset and high defense stat turn it into a mini-Alakazam, although it may not last long in a battle, it will sure bring in some heavy damage before going out.

The Rock typing is most commonly seen used with Golem, however we aren’t talking about the main meta Pokémon, we are looking for the Hidden Gems. Rock types have a weakness to Steel, Fighting, Ground, Water, and Grass type attacks, making it vulnerable to many strong attackers.

For your Rock type Hidden Gems you are looking at using your Generation 1 fossil Pokémon, however both using very different types of movesets. Omastar takes advantage of its secondary Water to use a dual Water type moveset while Kabutops turns into a hard hitting Fighting and Rock type attacker.

The Ghost typing is often a favorite to Trainers who like to play on their bad side a bit, having a weakness to Dark and Ghost types but also being almost invulnerable to Normal type attacks.

There is a reason that Banette is almost always added as a second option to Gengar in Raid Guides, and this is why. Banette may not look like much, but when it comes to Hidden Gems, it certainly fits the job description, providing a great damage output and functioning like a smaller Gengar.

The Dark typing is a rarer typing to come by for many trainers, however if you dwell into the darkness you can come across a few goodies, having a weakness to Fairy, Fighting, and Bug type attacks, Dark types certainly have their like niche in the meta-game.

If you want to really get into using this Hidden Gem, you will have to equip it with its best moveset and take advantage of its high attack stat.

The Dragon typing is one of the strongest typings in Pokémon GO and in the Pokémon Universe, being extremely rare to come across for many trainers, and because of this many come equipped with very strong attacks and performance in general.

The issue with this is that because of this, all of the viable Dragon types are already part of the main meta-game Pokémon, so sadly, there are no Hidden Gems when it comes to Dragon types.

The Fairy typing has seen some better days, serving better as a secondary typing to popular Pokémon such as Gardevoir but failing in many areas as a primary typing.

We really only have one Hidden Gem when it comes to Fairy types, and that’s Granbull. Granbull is essentially the definition of a Hidden Gem, having a great CP, overall good stats, and an effective moveset.

The Steel typing is one of the most sought out typings in Pokémon GO, having some strong contenders such as Metagross or Aggron, but here we are looking for the Hidden Gems, and we think we found one.

Steelix is known for being a complete Iron Defense, having an extremely high Defense stat and serving more than needed as a gym defender, although it can take some heavy damage from Pokémon of certain typings, we encourage you to take a shot at using Steelix.

The Bug typing has been well ignored in the past because of its weaknesses to the popular Fire, Rock, and Flying type attacks. Howver, though this is the case, they can still melt through Grass, Psychic, and Dark types like a Magcargo through butter.

Forretress is the last Hidden Gem we can report, although not sharing the same power as the main meta-game Pokémon, it still provides a steady stream of force and with a high defense, well it certainly needs it.

The entire purpose here was to call out the Pokémon which have been ignored in many cases in the meta, the Pokémon that you don’t see in every gym or in every raid, to give the underdogs a chance to shine, there are a lot of Hidden Gems in the meta-game however we tend to ignore them for the bigger players, well, don’t. Throw a curve-ball into the game, and bring something new and fun for a change, use the Hidden Gems of the meta-game.

This article was submitted by Discord user Dillon|TL 40, if you would like to see your article idea made reality, feel free to send us a message through our Discord server!

Galarian and Alolan Pokémon take over 7 KM Eggs, and Latias...