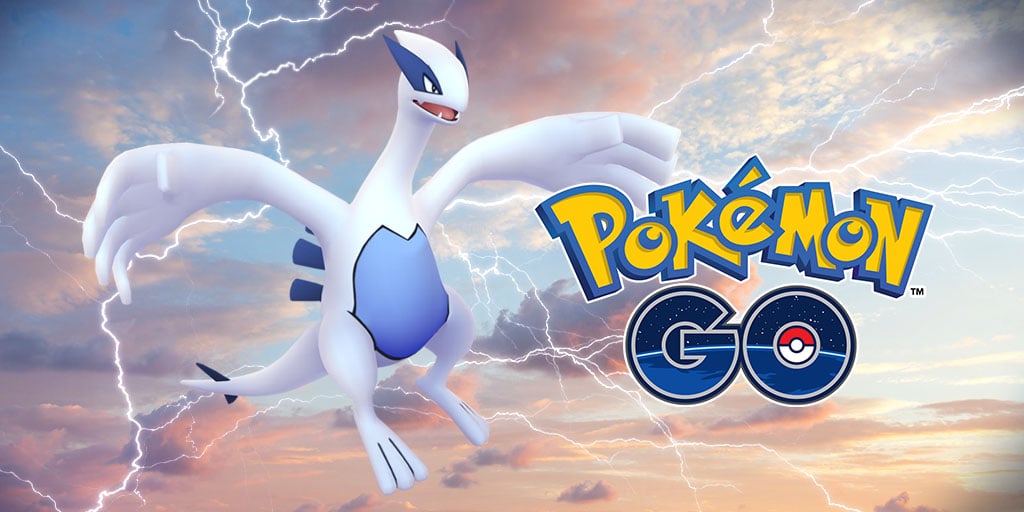 Niantic just announced that the Legendary Pokémon Lugia will return to Raid Battles in Pokémon GO on March 16, right after Rayquaza returns to the ozone layer. Thus, the weather trio (Groudon, Kyogre and Rayquaza) raid battle cycle will finally come to an end tomorrow after three intense months of battling. The purpose of this article will be to discuss the relevance of Lugia in the current metagame, its main strengths and weaknesses and how it can be used efficiently.

Lugia is a legendary Pokémon originally discovered in the Johto region. It is often regarded as a flying fortress, mostly due to its massive bulk and defensive stats. The following Table recaps its base stats in Pokémon GO and the Max CP to look for when trying to catch it.

As it can be seen in the Table above, Lugia’s Max CP goes to show how good its stats are. It has one of the best Defense stats in the game, only behind Shuckle, Regice, Regirock and Steelix. Furthermore, its base Stamina stat adds up to build one of the greatest bulk stats in the game. Taking down Lugia won’t be an easy task!

The main issue with Lugia is its Attack stat. Lugia is not a great attacker in terms of DPS, but its bulk will allow it to stay in battle for a longer period of time. Thus, Lugia will deal a significant amount of damage in the long run while it remains in the field, but there are other attackers that can deal more damage in the same period of time.

Lugia’s place in the metagame

Let’s be clear, Lugia is not the best damage dealer in the game due to its average attack stat. However, it can be used efficiently for different purposes. If you’re trying to take down a Machamp raid boss in the shortest amount of time possible, Alakazam, Espeon and Mewtwo will outperform Lugia by far. However, it is theoretically possible, according to some battle simulations, to take down a Machamp raid boss in a 1v1 battle with just one weather-boosted Lugia with the right moveset, while the other options would faint several times.

The example just used represents Lugia’s place in the current metagame. It is a bulky Pokémon that can be used to swipe gyms and take down raid bosses, but it will never be the best choice from a time to win perspective. It could be defined as a resource-efficient attacker. Now, let’s take a look at Lugia’s current movesets and the weave DPS that they deal.

Looking at the results obtained with the weave DPS formula, the Table above shows that Lugia’s new best moveset is Extrasensory and Sky Attack, its Psychic and Flying type moveset, which both get boosted by the STAB bonus. It is often recommended to use a multi-bar charge move and this is where newly buffed Sky Attack takes clear advantage in front of Futuresight. Even though Sky Attack clearly outperforms Futuresight, there are still reasons to use it, and that is if you want to use Lugia with only Psychic type attacks for certain specific matchups.

When to use Lugia

Lugia will never be the top choice from a time to win perspective. However, there are certain scenarios in which using Lugia can be beneficial over other options.

Potions and revives are scarce nowadays. Although Machamp is probably the best choice if you want to take down a gym (usually full of Normal type Pokémon) in the shortest amount of time possible, Lugia can be a resource-efficient alternative. It does not have a high attack stat, but its bulk will make it last for a large amount of time in the battlefield and deal a significant amount of damage in the long run.

Machamp raids are still around, and Lugia is a viable choice to use. Mewtwo, Alakazam and Espeon will finish the job way faster, but Lugia will be able to last longer in the field and deal a significant amount of damage too. Furthermore, Lugia’s Psychic and Flying typing will allow it to double-resist Machamp’s Fighting type moves. If you want a difficult challenge, try to defeat a Counter/Close Combat Machamp raid boss on a 1v1 battle, Lugia is the only Pokémon capable of doing that without fainting.

Although Lugia is not the best choice from a time to win perspective due to its low attack stat, there are certain scenarios in which using it can be efficient, as it has been discussed in the article. Lugia is more of a resource-efficient bulky attacker, which can also be used in Machamp raids.

However, if Legendary Pokémon could be placed in gyms, Lugia would probably be one of the best choices out there, if not the best. Its bulk makes it last long in battles and a mid-to-large sized group of trainers is required to take it down in raid battles.