Trainers were wondering what exclusive move Salamence would be able to learn during April’s Community Day. Some expected it to be Fly, whereas others thought it’d be Outrage. Well, the exclusive move was finally Outrage, the best dragon type charge move in the game. Is Outrage Salamence meta relevant? How does it compare to Rayquaza? The purpose of this article will be to solve these questions and more!

Outrage, Draco Meteor… or both?

Alright, let’s discuss which one is better. If we take a look at the move stats, on paper Draco Meteor is better than Outrage:

Take the last column with a grain of salt. The reason why is because the general cycle DPS formula greatly benefits one-bar charge moves as it’s assumed that the attacker faints right after firing off a charge move, which means that there is no energy loss in the process, and that’s not true. That’s why battle simulations are always better.

After running several battle simulations against different raid bosses with different movesets to test most scenarios, some results should be highlighted. It’s important to mention that battle simulators are not yet capable of recreating an optimal scenario where the attacker would use one charge move or the other with the most energy-efficient strategy. Some raid boss movesets are in favor of Draco Meteor (e.g. Solar Beam Latios or Dragon Pulse Giratina) whereas others are in favor of Outrage (e.g. Dragon Claw Latios or non-Dragon Pulse Giratina), but overall Outrage is safer to use, and that’s why Outrage is generally better than Draco Meteor as the energy waste is lower.

To follow that strat, the attacker must be aware of several things. How much energy it has, the amount of time elapsed since the last incoming charge move from the raid boss (to “estimate” when the next one will come), the amount of energy the raid boss might have (or how close it is to firing off another charge move) and last but not least, the unpredictable RNG. If you know how raid boss mechanics work, you probably know that the outcome is generally difficult to “predict” and some scenarios are more RNG-dependant (based on the moveset of the raid boss). If the user (or simulator) is aware of all these variables, using the right charge move to minimize the energy loss (maximizing the efficiency) is possible, but still dependant on the RNG. For example, if you’re facing a Latios raid boss, it’s significantly easier to estimate when a Solar Beam might be coming (and dodge it, if needed) than a Dragon Claw, which is a 3-bar charge move with a lower damage window and cooldown.

If you still want to invest and try using mixed Salamence, there are a few tips you should consider.

Alright, this looks good on paper, but what happens when we test it in a real scenario? Fortunately, Kieng (one of the best players in the world) has tested mixed Salamence against Solar Beam Latios in his latest video, so that will be an excellent example for this article. (Thanks for your awesome content, kieng!) He compared two strategies: Just using Outrage and using mixed Salamence (landing a Draco Meteor first followed by as many Outrages as possible before fainting). We can compute the damage that both Draco Meteor and Outrage will deal based on the Pokémon GO damage formula: 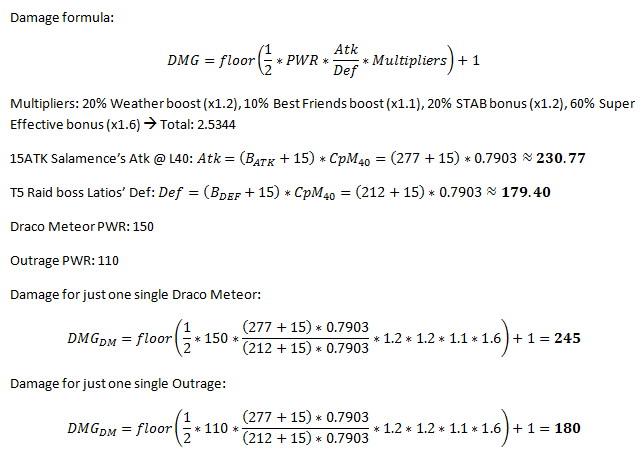 Remember that this is just the damage dealt by one single charge move, but what we’re interested in is the total damage at the end of the battle to analyze the performance of each strategy. An interesting way of doing that is by taking the fast move damage out of the equation and only consider the charge move damage. However, since there is a difference in energy requirement from both charge moves, a few additional Dragon Tails must be landed to charge up Draco Meteor. A simple solution to deal with this is to estimate the additional damage coming from fast moves based on the fast move cooldown (1100 ms) and its damage (25, can be obtained using the formula above with Dragon Tail’s base power of 15).

Don’t forget that moves have a cooldown and that must be taken into account too! You’d be surprised by how many trainers see 180*2>245 and thus think Outrage is better. That’s just plain wrong and not the right methodology to compare both moves.

Is it worth spending 75k stardust and 75 Bagon candy to unlock the second charge move and build a team of mixed Salamence? The answer is probably no for the average player, but if you are the kind of player that wants to push your limits and go for the fastest raid time, then you can try it out!

Salamence in the raid meta

Salamence’s attack stat (277) is quite impressive, just below Palkia’s (280) and Rayquaza’s (284), and it’s not even a legendary Pokémon! Furthermore, Salamence has what we could call a “DPS-oriented stat distribution” because it has a high attack stat, very decent stamina and average defense. In PvE (raids & gym battles), your Pokémon transform received damage from incoming attacks into energy. Since there is an energy gain per HP lost, having lower defense and good stamina allows you to generate a decent amount of energy that can be helpful to charge up your charge move. Rayquaza and Salamence have almost the same bulk in Pokémon GO, and the only difference between them is the 7 points in attack stat, which can sometimes translate into a lost breakpoint (e.g. vs Giratina (BFFs, WB & non-WB) or vs Latios (WB)). If they deal the same damage with their fast moves (no breakpoint difference), then their performance will practically be identical, which is quite impressive.

Palkia and Dialga have fantastic stats too, but their movesets hold them back a little bit. Palkia is an outstanding attacker and it slightly outperforms Dragonite in most scenarios, but still ranks a bit below Ray & Salamence and you need rare candies to power it up. Dialga doesn’t have access to Dragon Tail or Outrage, but it still performs well. It doesn’t deal as much damage per second as the other dragons, but its bulk and excellent typing compensate and in some scenarios (e.g. vs Dragon Claw or Psychic Latios & vs Dragon Pulse Giratina) it can be the best counter or perform close to the best counters.

Let’s keep things simple. Rayquaza and Salamence have almost identical bulk and the same best moveset, but Rayquaza’s attack stat is a bit higher than Salamence’s. Thus, there are only two potential scenarios where Salamence could outperform it:

Alright, let’s compare them against two different Latios movesets to see how rough RNG can be. As always, simulations were performed using pokebattler’s battle simulator.

Dragon Claw, as a 3-bar charge move, can be quite troublesome: 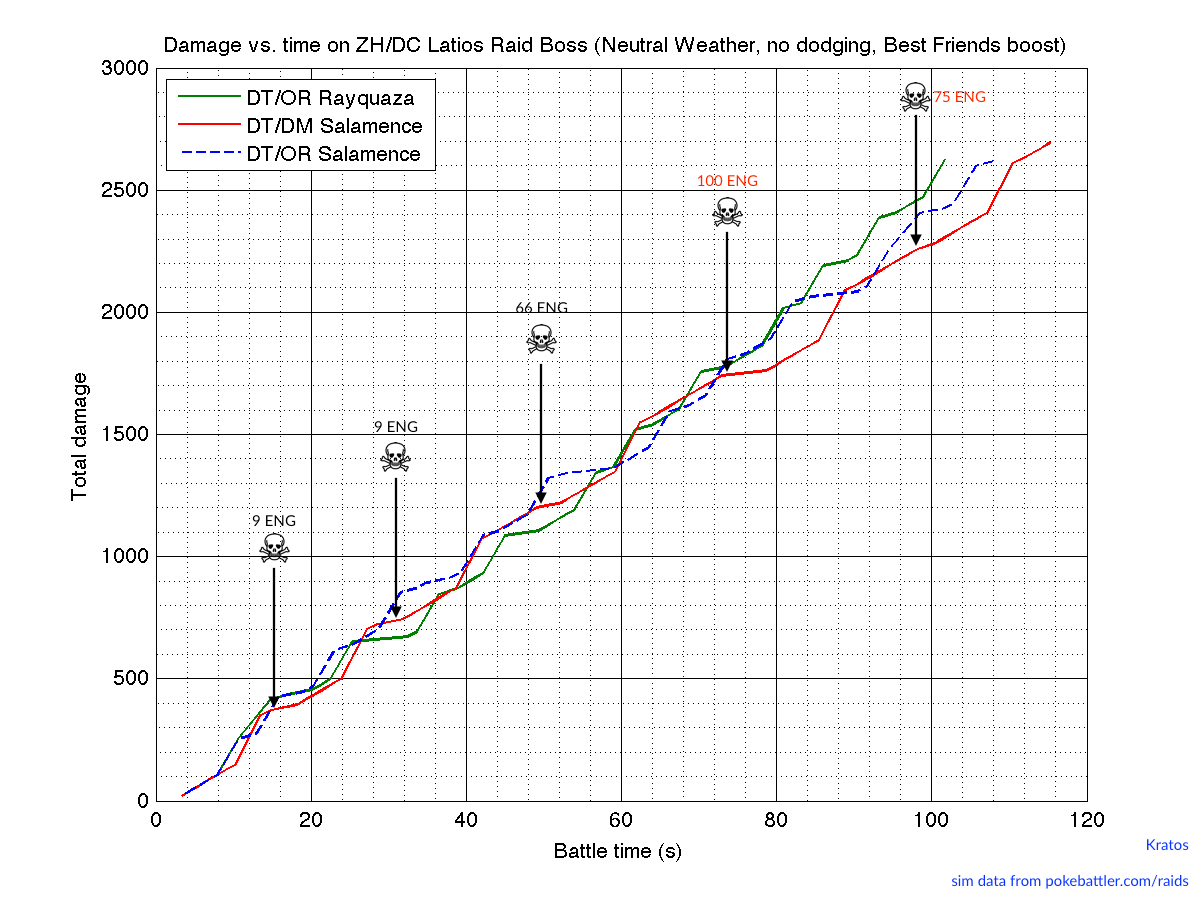 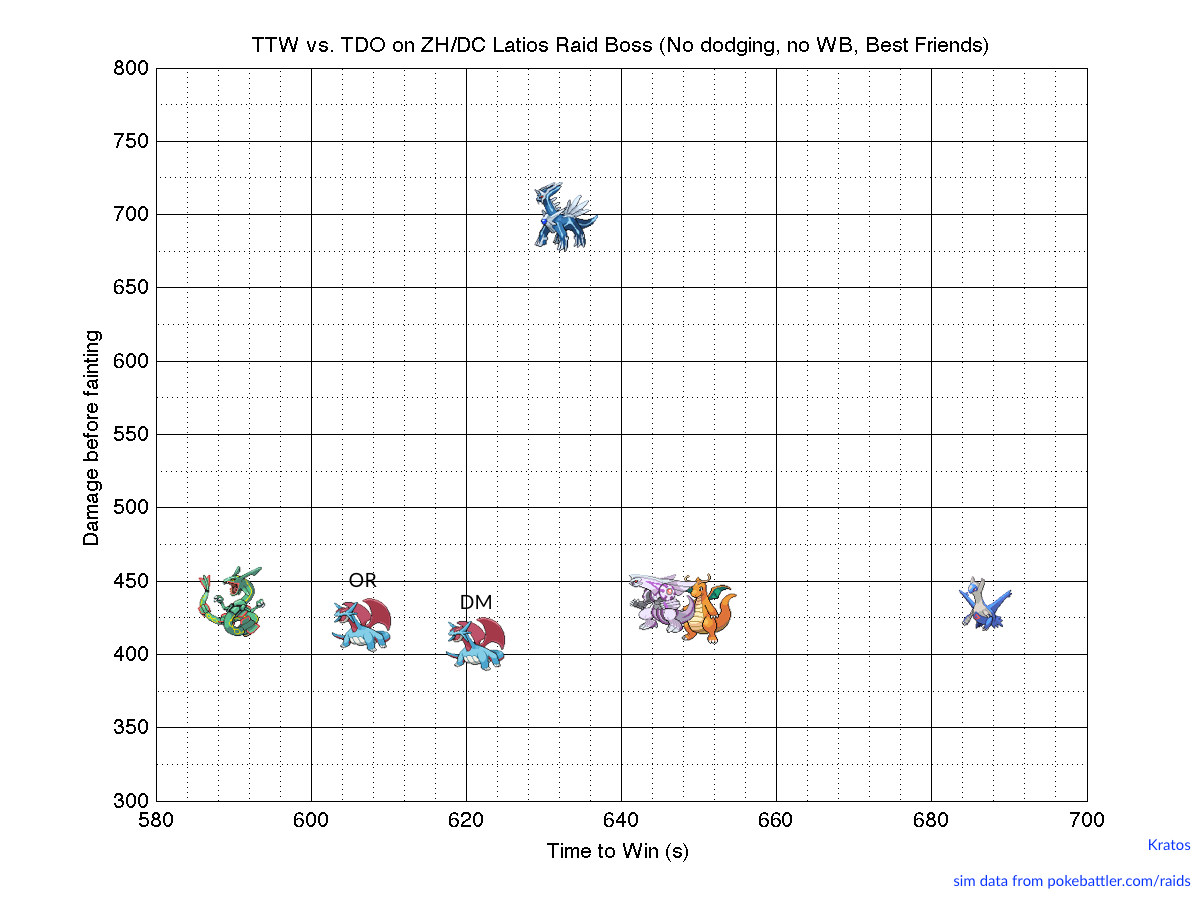 In this case (and in general), Outrage Salamence outperforms Draco Meteor Salamence. But as it has already been said, Rayquaza’s attack stat allows it to take the lead. It’s important to recall that this will be the most common raid scenario. 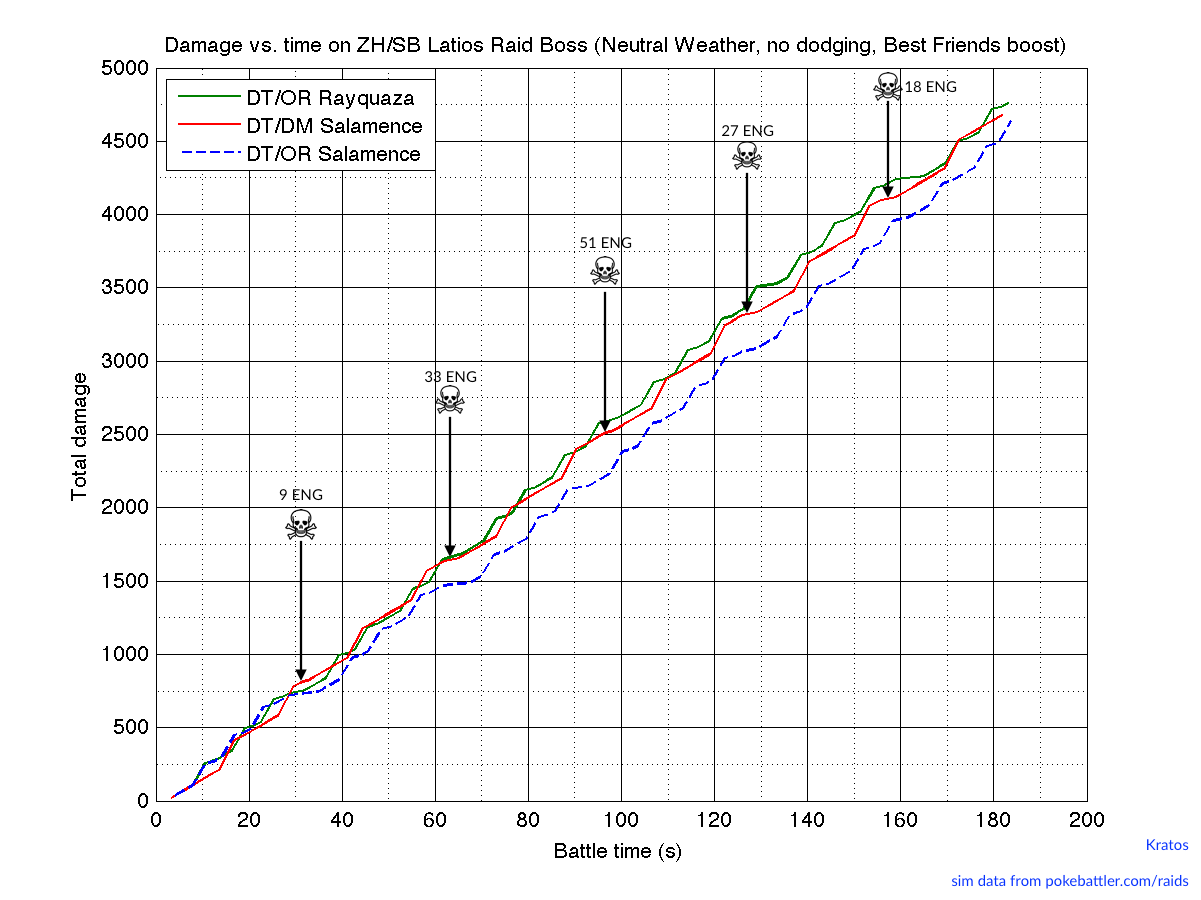 The energy waste, in this case, is significantly lower, and that’s why Draco Meteor Salamence slightly outperforms the Outrage variant, and it even challenges Outrage Rayquaza! If RNG is almost perfect, it has the potential to outperform it (feel free to check out raid battle simulations against Dragon Pulse Giratina), but in general Outrage Rayquaza and Outrage Salamence will be safer to use, and cases like this one are just outliers. 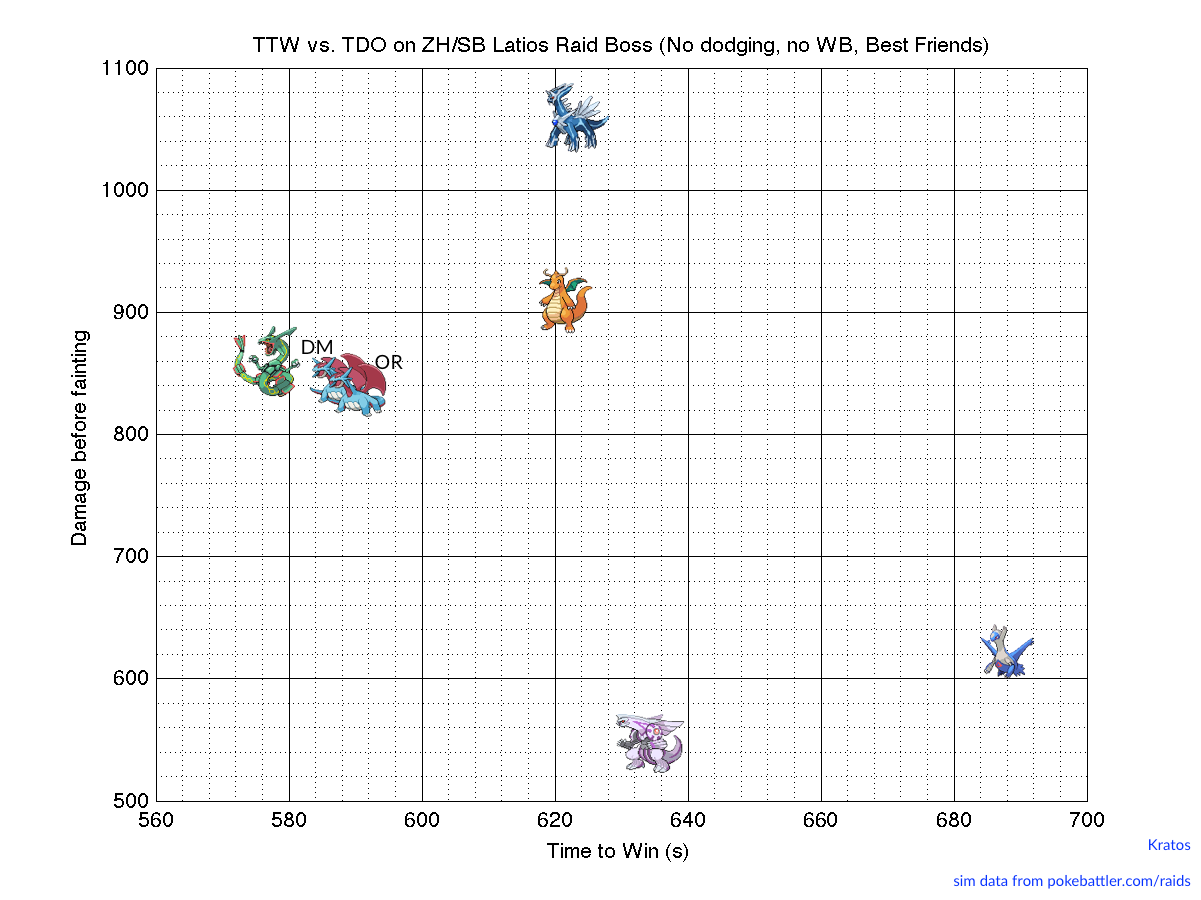 So how would mixed Salamence perform? Simulators are still not ready to test it out. On paper, it can be said that mixed Salamence has the potential to outperform Outrage Rayquaza (not by far), but the chances of that happening in a real scenario are slim, which usually makes the investment to unlock the 2nd charge move not worth it.

Salamence is not the best dragon type Pokémon to use in PvP. There are plenty of other alternatives with better stat distributions and movesets (Giratina, Latios, legacy Dragonite, …). However, if you still want to use it, the Master League seems to be where Salamence could perform better since its S-tier attack stat is a limiting factor in lower leagues.