Or in other words, how good is Raikou vs Zapdos?

Professor Willow’s Global Challenge continues, and during the last weekend, all goals were achieved. Thus, Zapdos Day was unlocked. On Saturday, July 21, Zapdos will be available in Raid Battles around the world for a limited three-hour period. During that time, all Zapdos caught will know the exclusive (fast) move Thunder Shock, and unfortunately using a Fast TM on a previously caught (and even powered up) Zapdos won’t work, so the only way of getting one with Thunder Shock is by raiding during the limited three-hour period, sadly.

The purpose of this article will be to discuss whether or not Thunder Shock/Thunderbolt Zapdos outperforms the current Charge Beam/Thunderbolt variant and if it does, how close it is to Thunder Shock/Wild Charge Raikou.

First things first, let’s begin with the fast move. The Table below compares both moves and their main characteristics:

If we want to gain energy fast in order to fire off the charge move, EPS is the metric we’re interested in. Even then, the difference between both moves is almost negligible.

Furthermore, another important aspect (in fact, one of the most important ones) is how easy it is to dodge incoming attacks with a specific fast move. Charge Beam is too slow in comparison with Thunder Shock, and it makes it pretty difficult to comfortably dodge when using it. On the other hand, Thunder Shock is fast, smooth, with better DPS and a good energy gain rate. Thus, Thunder Shock is the clear winner.

(It’s also important to keep in mind that Fast move DPS is not a very relevant metric, as weave DPS also considers the charge move and it is a better representation of the whole moveset viability. However, for this specific short comparison, it’s good enough to at least describe how a specific fast move will perform in battle)

If you take a look at Zapdos’ stats, you will see that it has a very respectable base attack stat of 253, higher than Raikou’s (241), the best Electric type Pokémon in the game as of now. However, Raikou has access to Wild Charge (and also Thunderbolt, btw), whereas Zapdos has only access to Thunderbolt, Thunder (a pretty bad charge move) and Zap Cannon (a bit too slow, good DPS but unreliable and not consistent enough). Now, you might be wondering if the addition of Thunder Shock to the fast move movepool of Zapdos will compensate the fact that it doesn’t have access to Wild Charge and make it rank #1 among electric type attackers. Well, some test simulations were performed on Pokebattler in order to check that.

* Moveset cycle DPS calculations JUST consider the weave DPS of a specific MOVESET (with STAB), without taking into account the Pokémon’s base attack stat. A potential “factorization” could be obtained by multiplying this value times the base attack stat of the specific Pokémon and dividing it by 2 times a representative base DEF stat (let’s say 100). By doing that, Raikou would end up with 27.60 and Zapdos with 27.02, which would represent a better “comparison” considering also their offensive potential and not their movesets exclusively. Still, Raikou would be a little bit better.

Zapdos and Raikou have been selected among all Electric type Pokémon to perform these simulations against Kyogre. The main simulation parameters can be seen in the Table below:

And the charts below will show a comparison between TTW (the hypothetical amount of time required to take Kyogre down for the given parameters), TDO (Total Damage Output) and a comparison regarding the battle performance of the three Pokémon studied, which are TS/TB Zapdos, CB/TB Zapdos and TS/WC Raikou (the best electric type Pokémon in the game as of now, and thus the best reference). 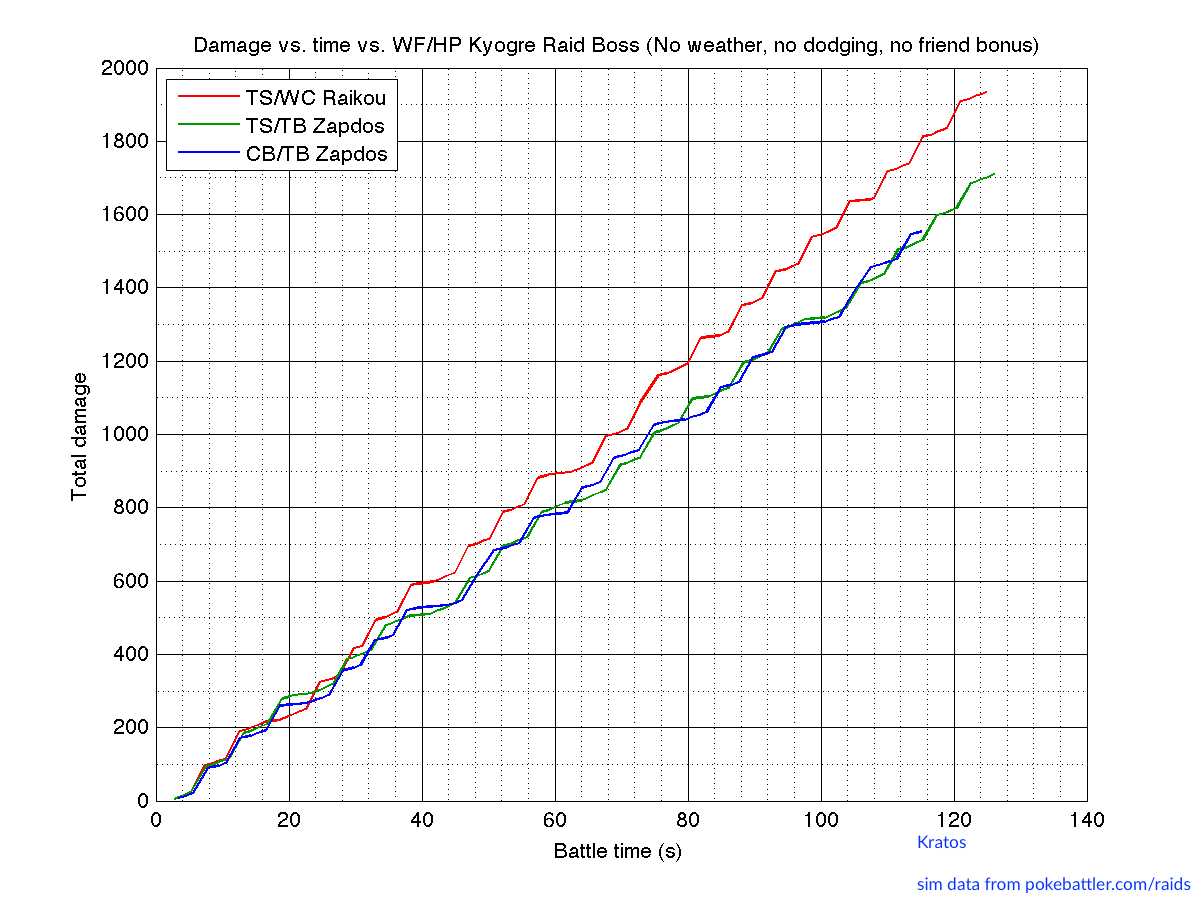 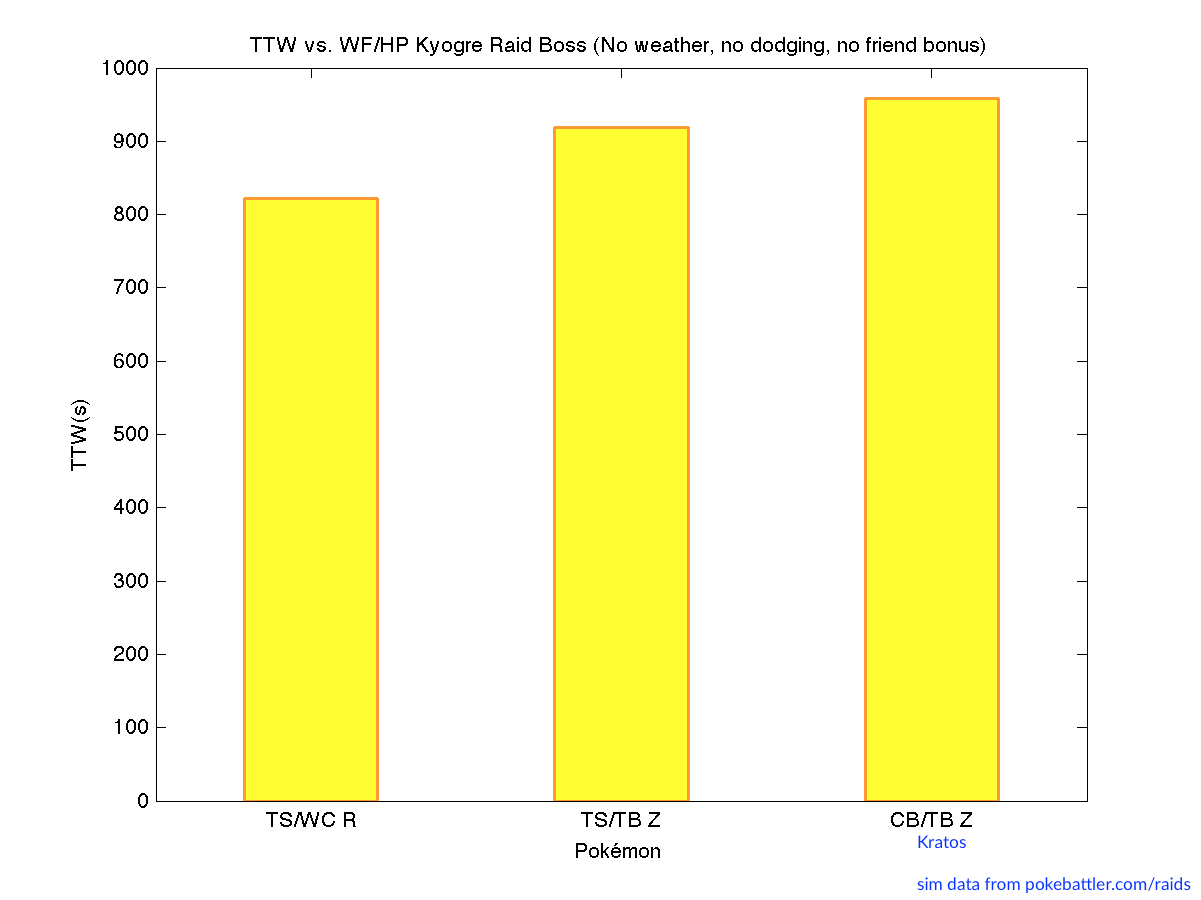 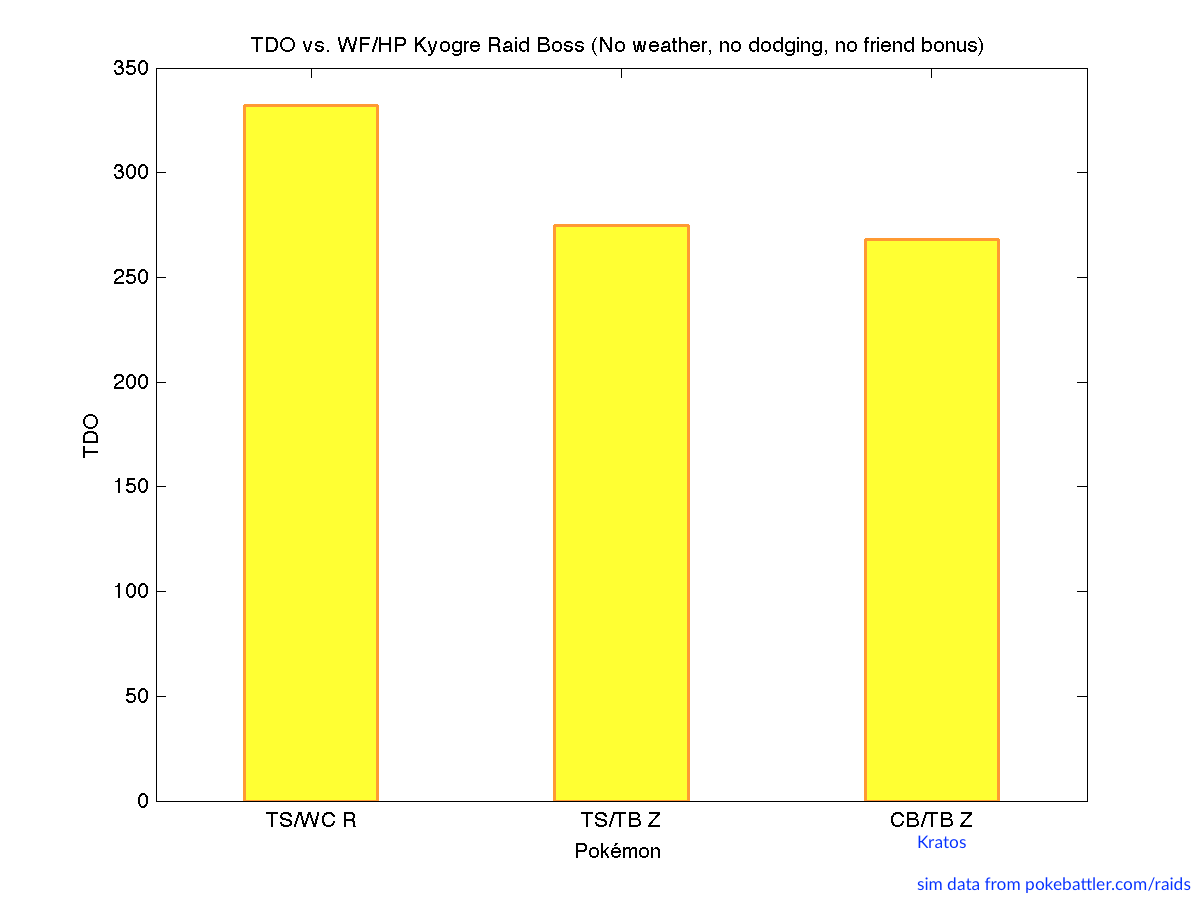 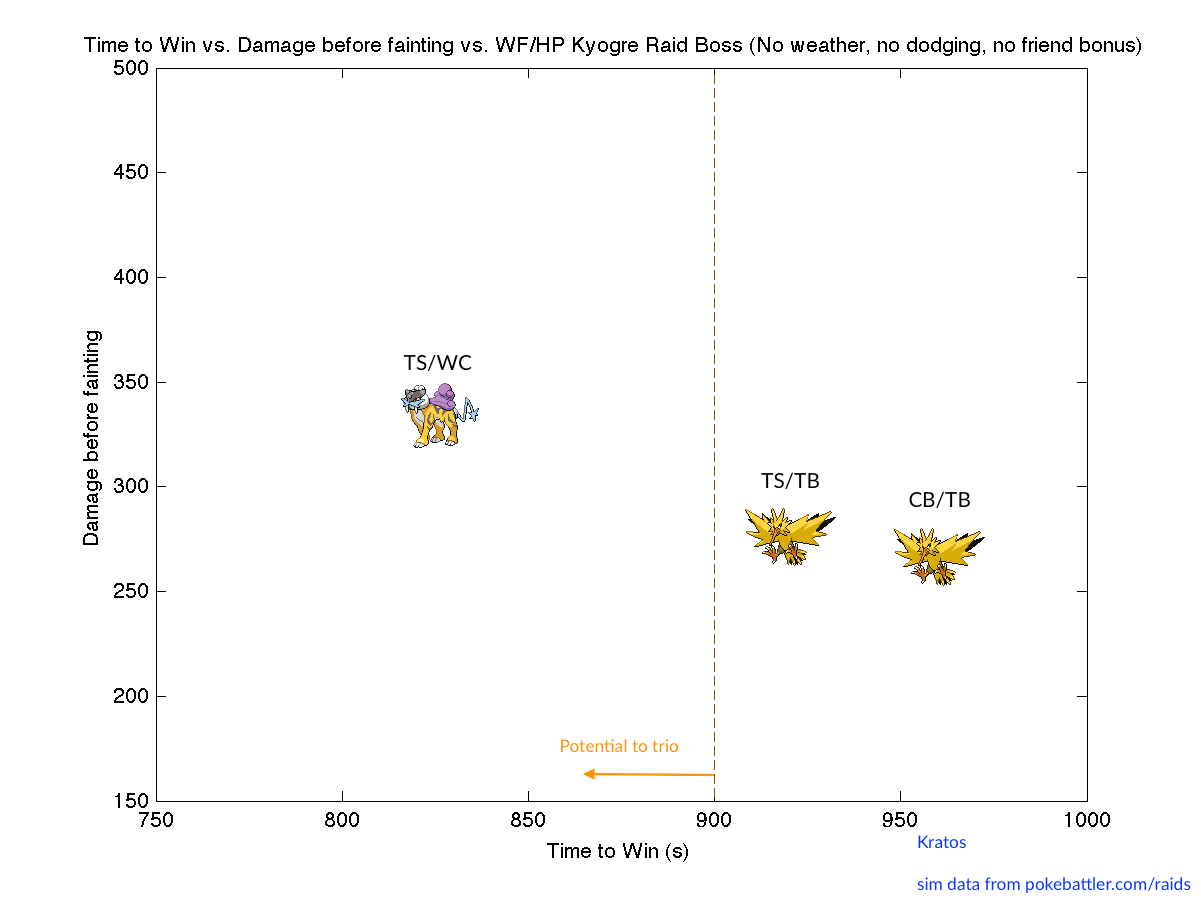 The images above show the expected trend. Thunder Shock Zapdos is better than the Charge Beam variant, but still not as powerful as TS/WC Raikou, despite having a greater offensive potential. This goes to show, yet again, how important movesets are. None of the Zapdos variants are capable of “trio-ing” a WF/HP Kyogre without weather boost (unlike Raikou). Keep in mind that you still need a reasonable margin below 900 seconds to achieve it (you need to assume relobby, healing and lag time penalties).

Another important aspect that is sometimes forgotten is that Raikou has two additional advantages over Zapdos, apart from outperforming it in battle due to the fact that its best moveset is better than Zapdos’. Raikou is a pure Electric type Pokémon, and Zapdos is an Electric and Flying type Pokémon. Raikou only has one single weakness, which is to Ground type attacks, whereas Zapdos is weak to Rock and Ice type moves (but resists Ground type moves). As an example, against Kyogre (or Walrein/Lapras/Articuno), Raikou will be a MUCH better option because it won’t take super effective damage from potential incoming Blizzards, whereas Zapdos will suffer much more. Finally, Raikou also has greater bulk than Zapdos, as they share the same base stamina stat but Raikou has a greater base defense stat.

What if Zapdos ever gets access to Wild Charge?

Alright Kratos, that’s good and all that stuff but… What would happen if Zapdos, whose attack stat is over Raikou’s, ever gets access to the supreme charge move Wild Charge? Don’t worry, we also thought about that, and ran some simulations on Pokebattler accordingly. But how about Thunder Shock and Thunderbolt Raikou? Well, GO Hub also thought about that and included it in the mix. The graphs below show a comparison of how those two additions would perform in battle (same raid parameters).

IMPORTANT: Remember that Thunder Shock/Wild Charge Zapdos is NOT obtainable in game, this is just a hypothetical situation. 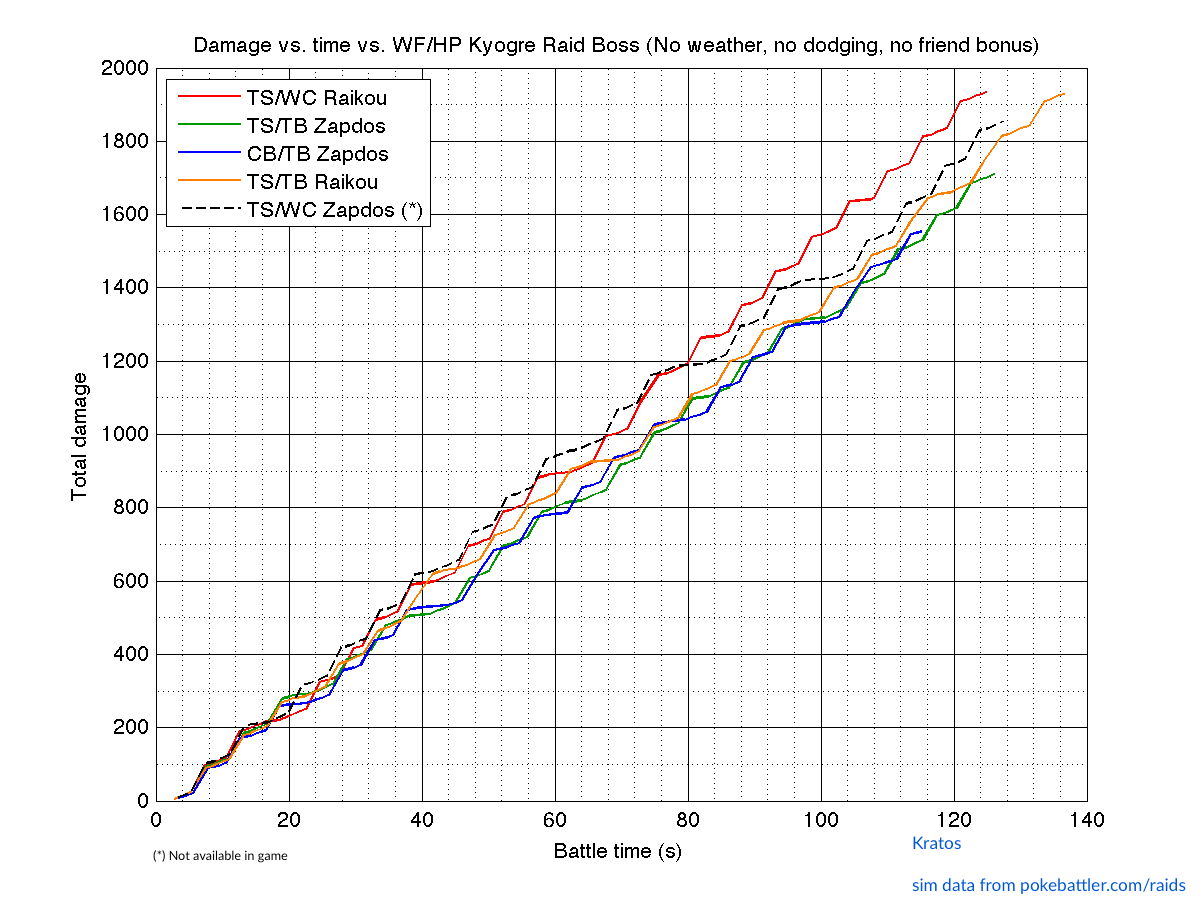 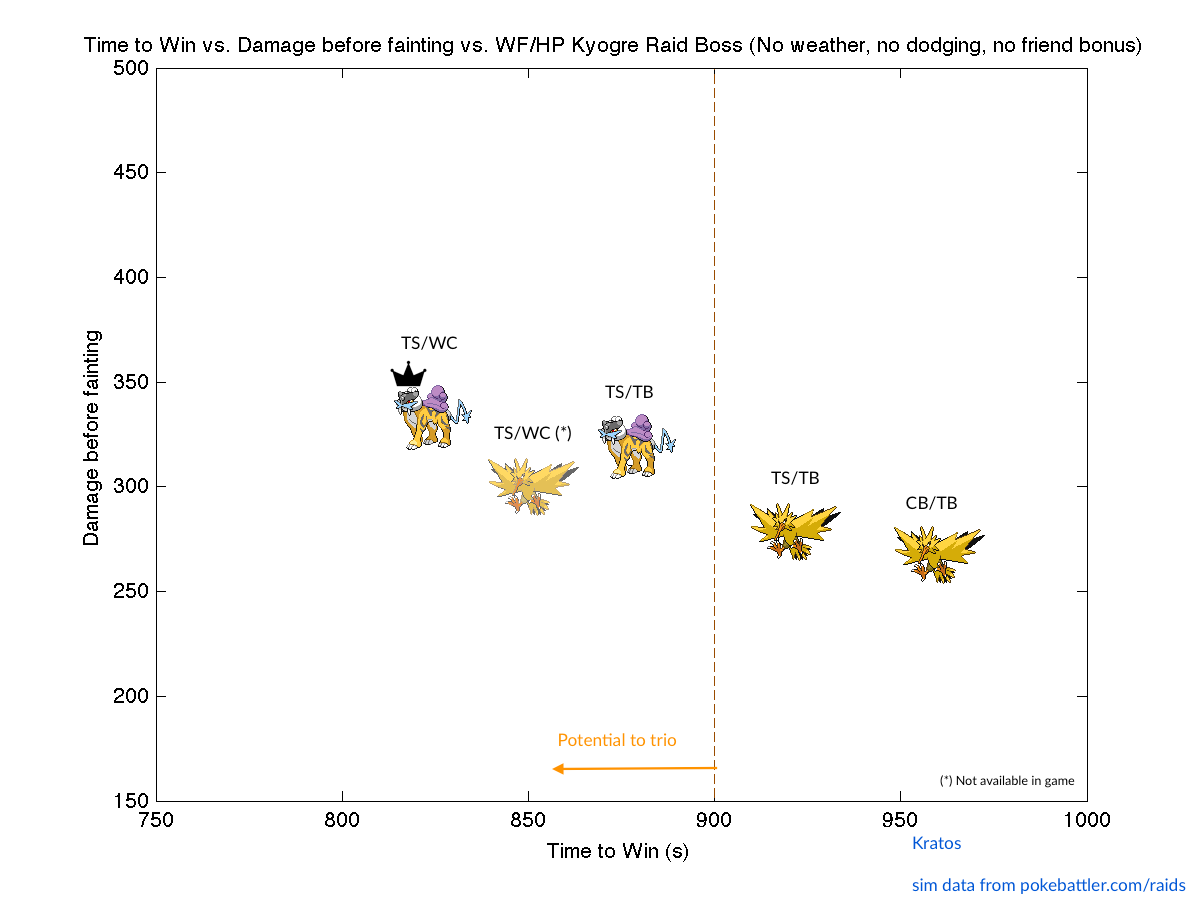 Several things can be said from the results obtained. Thunder Shock/Wild Charge Zapdos would outperform Raikou in this specific matchup at the beginning of the battle. Then, as the battle goes on, Raikou’s bulk comes in handy and it still remains as the best option.

There are some segments in the graph where Zapdos cannot fire off charge moves consistently, and the reason behind that is that either a Hydro Pump or a constant Waterfall spam has defeated Zapdos before it was able to fire off a Wild Charge. Raikou, however, with greater bulk, is usually more consistent and in the long run performs better, as its TDO shows. On a pure DPS battle in equal conditions with no deaths, Zapdos would win due to the fact that it has a higher attack stat, but as the battle goes on, Raikou’s bulk makes it stand out, while still dealing respectable DPS. In fact, TS/WC Zapdos’ deaths to win would be ~42 whereas TS/WC Raikou’s are ~38. And how about CB/WC? That’d probably reduce the graph’s visibility. You saw how TS/TB Zapdos compared to CB/TB, imagine an almost equivalent scenario between TS/WC and CB/WC.

Here comes the TL;DR summary of this article: