In the biggest Pokémon GO APK teardown to date, we get glimpses of Niantic Campfire, a new item called Beast Balls, mentions of Obstagoon's signature move Obstruct and much, much, more...!

Hello Trainers! Pokémon GO 0.241.0 update is currently rolling out to a device near you and it brings with it a lot. This was the PokéMiners biggest APK teardown to date, and for a good reason – it truly is a massive dump of findings, assets, and interesting bits of code.

Please read through all of this with a grain of salt – we often post data mining reports which end up taking months to release, and we don’t want our readers to be disappointed. Be smart, read this like speculation and be happy once it goes live.

💡 Disclaimer: You know the drill by now, everything in this article is data mined, and therefore subject to change or not even being released at all. All of this information is publicly provided by the PokéMiners and includes some of my commentaries.

These have been previously mined, however now they have forms to support their regional evolutions. Kleavor evolves from Scyther, and Ursaluna is the final form of Teddiursa.

In Hisui, Ursaring evolves into Ursaluna when exposed to a Peat Block during a full moon.

According to the miners, a new “RaidBall” was added to the Raid Encounter and Raid Info sections. Apparently, the ball type you use during the encounter after the raid is set before you complete the raid, as it’s loaded with the raid details at the beginning. This is fairly concrete evidence that we’re going to get Beast Balls for Ultra Beast raids.

Ultra Beast encounters got the mythical treatment, with the ball being defaulted to a beast ball and the rest of the GUI being hidden. So no berries.

Obstruct has been added, which is the signature move of Obstagoon. The final evolution of Galarian Zigzagoon. What’s odd is that Obstruct is a non-damaging move.

Obstruct protects the user from any moves (except status moves) used against it during that turn. If Obstruct successfully blocks an attack that would have made contact, the attacker’s Defense drops by 2 stages.

Sounds like there’s a precedent for a PvP debuff, not sure how they’ll figure out damage though. This will be an interesting one to keep an eye on.

A new quest condition was added, likely use a lucky egg or star piece. 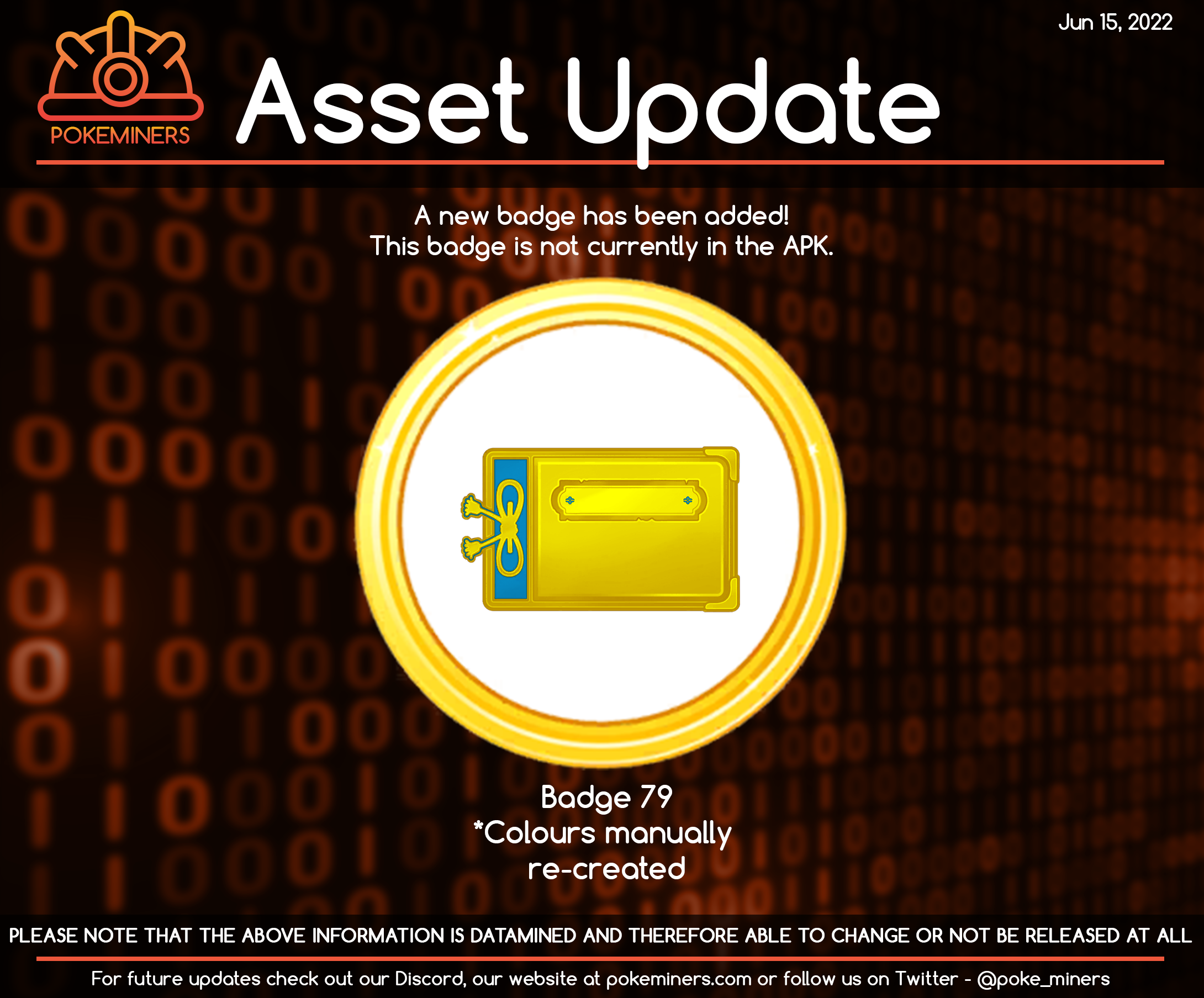 Apparently, Hisui is Gen 8A. This will be a fairly easy platinum medal I think unless Niantic drags their feet on releasing the final Pokémon of the generation for years, and years… coughkecleoncough.

NOTE: Technically there’s no connection between the badge graphic that was found earlier in June and the badge listed. However, I’m fairly sure it’s safe to say the badge the PokéMiners found is for the Hisui dex.

Rhi 2.0? I think at some point Rhi will attempt to dress “more like us” in an attempt to understand our world better. I’d wager they get a Go Fest T-shirt, but that’s just me.

What’s that? You want to play the game while not playing the game?
At this rate your entire home screen will be nothing but Pokémon Go Widgets. This is not live yet, so no preview for you.

Daily Incense is what your daily free spawn is called in the game code, this appears to be something different or an upgraded version. The PokéMiners aren’t exactly sure what to make of this at this point as there’s not a lot to go on.

Some PvP updates, they’re still working on it. They’ve added a way to toggle experiements, so they apparently don’t yet know how to fix everything. Which is… fun.

They’ve added what raid boss you fought to the logs

Because we haven’t been talking about routes since 2019. What’s that? We have? … Theres no way, *checks notes* Oh…

Route Colours was first discovered a while ago, and when I say a while ago it was so long ago I can’t even find the original teardown it was reported in, and I looked. Anyway, they finally finished it and here’s what the colours look like:

This was added to the overhead map, so it appears that a path will appear on your overworld map to indicate where you need to go to follow the route.

Icon to indicate a route is on cooldown. Because walking the same path over and over again would be silly! *cough* ahhh, moving on…

More map types, so they can accurately label areas of the map.

Chat’s will be based on your region.

Campfire will have its own newsfeed

The feed will have different channels as well it looks like.

The posts can be timestamped and set to expire so they dissapear after a certain date/time, like after an event ends.

Priority flag, so they can really tell you what to read right now!

A bunch of stuff was added for something called a Gar account, the PokéMiners think its a way to verify your account on Campfire. Something like Whatsapp.

Lots of stuff for Social Service V2, likely for Campfire as well.

A previous text update had a bunch of informamtion on this, you’ll soon be able to adjust your performance settings in game.

You’ll be able to adjust things like the sky texture, render levels, avatar details, map details, etc etc. This will allow users to adjust settings to improve battery life, or throttle their battery to iminent doom with higher settings.

I don’t know why there is a tutorial on AR ads, but ok…

There were also a bunch of updates to Lightship, and adventure sync that to be fair will be transparent to you so I left them out. Thank me later.